The Anti-Vaccination Campaign Was Presented As A Struggle For Freedom 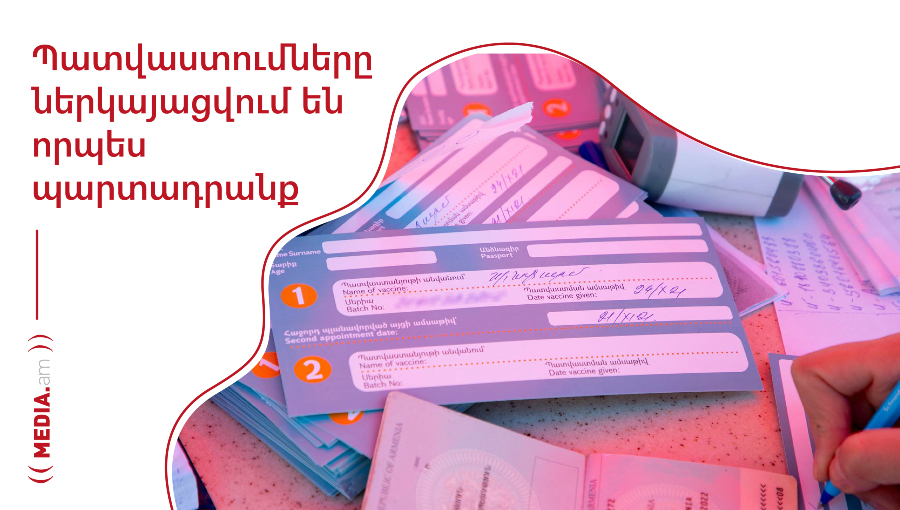 On August 20, the Minister of Health signed an order, according to which a negative result of the coronavirus test or a vaccination certificate must be submitted when going to work.

This new restriction was due to an increase in the rate of coronavirus infection and an extremely slow vaccination rate: If in neighboring countries 25-60% of the population had been vaccinated, in Armenia that figure was below 10%.

The new government decision came into force on October 1 and it did contribute to the increase in the number of vaccinations․ The figure for August more than tripled to 562,000 in two months.

However, with an increase in the number of vaccines, the anti-vaccination campaign became more active. Politicians and activists launched an anti-vaccine campaign, presenting the new decision as a form of coercion and insisting that there needed to be a fight for free will.

The media communicated this political campaign to the public without fact-checking – simply repeating what the politicians were saying.

The epidemic is a political issue

The coronavirus is a political issue in Armenia. It is perceived not only as a problem in the field of healthcare but also as a political tool. For the government, it became an opportunity to advertise its own work, for the opposition, a tool to weaken the positions of the government.

The pandemic in Armenia became politicized from day one when Nikol Pashinyan personally announced the first positive test in the country and started a series of live Facebook broadcasts, during which he informed the citizens about the number of positive cases and the measures taken. During the lockdown, Pashinyan always stayed in touch with the public via his Facebook lives. He urged people to send videos of quarantine violations and posted them on his Facebook page.

Nikol Pashinyan’s live broadcast on March 2. The Prime Minister calmed the public, saying that the test results were negative.

Thus, from the beginning of the pandemic, Nikol Pashinyan introduced himself as the main communicator with the public on this topic, leaving the apolitical specialists in the field of healthcare in the shadows. Other politicians followed the example of the Prime Minister,  making the pandemic, and then also vaccinations a political issue.

So, it is not surprising that the anti-vaccination campaign that gained momentum in September was led or supported by politicians.

At the beginning of September, the leader of the “Zartonk” National Christian Party, lawyer Ara Zohrabyan announced the creation of the “Free Will” initiative “to protect the rights of citizens and provide objective information.” As a justification for creating this initiative, Zohrabyan stressed that “citizens should not be forced to be vaccinated” and “the issue of vaccination should be the conscious decision of every citizen.”

However, in this statement, Zohrabyan made several false or manipulative allegations about the coronavirus and vaccines. For example, he claimed that the coronavirus was a man-made virus, “created and spread for some purpose.” However, this assertion is unfounded. At the beginning of the pandemic, scientists said that this is a natural virus and was not created by humans in a laboratory. U.S. intelligence also investigated the matter and found insufficient information to suggest that the virus was man-made in a laboratory. Media.am covered the manipulative allegations of Zohrabyan’s statement in detail.

The movement led by Zohrabyan appealed to the court to challenge the order of the Minister of Health on the new restrictions.

The movement also organized a rally, which was covered by the leading Armenian media. Several activists who had medical degrees or worked in the field spoke during the rally. It is worth noting that all of these doctors were politicized. Two of them, former director of the AIDS Prevention Center Samvel Grigoryan and former epidemiologist Eduard Hovhannisyan, had a conflict with the Ministry of Health in 2020, as a result of which Hovhannisyan left, and Grigoryan was fired. Recently, both of them have been making false or manipulative claims about vaccines and the pandemic.

For example, during a meeting with the Minister of Health in the National Assembly, Samvel Grigoryan claimed that “35,000 cases of reproductive health disorders, including miscarriages” were registered in the UK after the vaccination. Media.am could not find such data․ Grigoryan probably confused the numbers: In September, Britain announced that short-term changes in more than 30,000 menstrual cycles had been reported among 48.5 million vaccinated women. There was no information about any miscarriages. 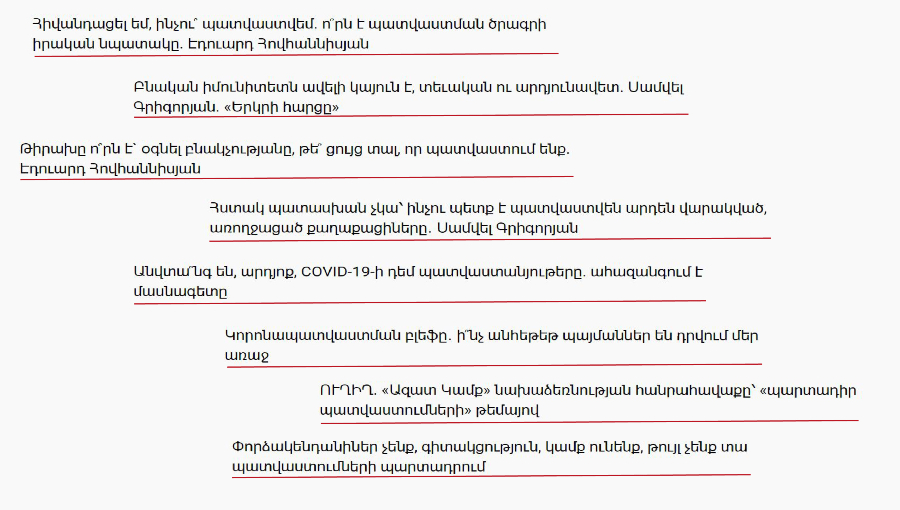 Headlines of statements of anti-vaccine doctors in the media

Samvel Grigoryan and a number of other members of the “Free Will” movement indirectly oppose vaccines, arguing that vaccines are ineffective or dangerous. However, one member of the movement, Dmitri Harutyunyan, who has a doctor’s degree but had left the field, directly calls on people not to be vaccinated. During the “Free Will” rally, he announced, “Don’t you dare get vaccinated […] you will be slaughtered.” He assured that vaccinations are dangerous, people have died from them in Armenia (no such data exists). Harutyunyan was spreading other false information: He said that the masks caused hypoxia (false) and that the Spanish flu was not contagious (false).

Despite the falsity of Dmitri Harutyunyan’s allegations, one of the well-known Armenian news outlets, “Aravot” newspaper, spread them without checking. 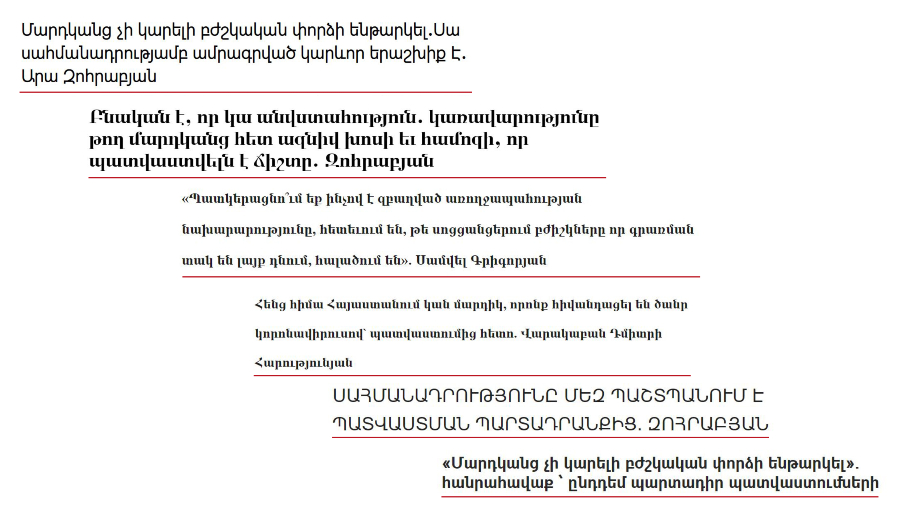 Coverage of the “Free Will” movement in the media

From the far right to the largest opposition force

In many countries of the world, it is typical of far-right politicians and movements to conduct anti-vaccination campaigns. There are several such forces in Armenia as well. One of them is the “Awakening” party, the leader of which founded the above-mentioned “Free Will” movement. The other is Marina Khachatryan, a former member of the Yerevan Council of Elders, who ran in the 2021 snap parliamentary elections as a candidate for the “Armenian Homeland” party.

Another example is the “Army of Light” movement, the participants of which were protesting and marching against “compulsory vaccinations.”

All these political forces are relatively small and are not represented in the parliament. However, the largest opposition force in Armenia, the “Armenia” bloc led by Robert Kocharyan, also took part in the anti-vaccination campaign. On September 10, the bloc announced that “the compulsion of getting vaccinated is unacceptable.” The statement also stressed that “vaccination should be the result of a conscious decision, not a form of coercion.” The announcement did not mention the severe epidemic situation and the extremely low rate of vaccinations.

Fight for free will

It is worth noting that many of the politicians who were against vaccinations in one way or another presented their position as a struggle for the expression of the free will of individuals, and not against vaccinations. Thus, it becomes possible to frame the anti-vaccination campaign as a struggle for freedom and move it from a discourse on healthcare to a legal one. Legal terms and lawsuits emphasize the freedom of the individual, pushing the public health crisis into the background.

Thus, lawyer Ara Zohrabyan, in a conversation with journalists, assured that they are against coercion and not vaccinations.

The “Armenia” bloc also avoided speaking out directly against the vaccines, criticizing only the coercion aspect. The deputy of the faction, lawyer Aram Vardevanyan said that the “Armenia” bloc is in favor of vaccines. “Yes, vaccination is currently the only way to fight the coronavirus,” he said, adding that vaccination should be a conscious decision of everyone and not a form of coercion.

The members of the “Armenia” bloc, just like the above-mentioned extra-parliamentary movements, manipulated the data on vaccines. For example, Aram Vardevanyan stated that, unlike Armenia, vaccinations are not mandatory in European countries. But when fact-finding journalists cited examples from European countries where the restrictions were comparable to those in Armenia, Vardevanyan changed his statement, saying that in Europe it is permissible to submit a negative test result instead of a vaccination certificate. Vardevanyan missed the fact that the same exact thing is allowed in Armenia as well. Moreover, a number of European countries, along with the new restrictions, made PCR tests cost a fee.

In an unofficial dialogue, another member of the “Armenia” bloc, Gegham Nazaryan, welcomed the violation of anti-epidemic rules.

The “Armenia” bloc also appealed to the Constitutional Court, challenging the decision of the Minister of Health.

Thus, at the beginning of autumn, when the government decided to demand a vaccination certificate or a negative test in the workplace, various political forces launched an information campaign against vaccines, framing it as a fight against mandatory vaccinations and for the free will of the people. However, these politicians manipulated information about vaccines or anti-epidemic restrictions and sometimes spread false rumors about vaccines.

The Armenian media could not filter right from wrong in this information flow, simply becoming the microphone of politicians.

Sources and methods used in this article