The Initiative Group Is Manipulating Data On Vaccines

The Armenian government has introduced a new rule for the fight against coronavirus, according to which public servants and employees of a number of sectors are required to submit to the employer either a negative coronavirus test result or a vaccination certificate.

Similar rules have been introduced in other countries as well, but in Armenia, the government has proposed applying the rule selectively, with the exception of high-ranking officials.

This new rule became a cause for dissatisfaction. A number of politicians stated that this is a violation of the law and the government cannot “force” employees to be vaccinated.

The President of the Chamber of Advocates Ara Zohrabyan even set up an initiative group “to protect the rights of citizens and provide objective information.” Substantiating his proposal, Zohrabyan made a number of manipulative and erroneous claims about coronavirus vaccinations.

Who is Ara Zohrabyan?

Ara Zohrabyan is not only a lawyer but also a politician. During the snap elections to the National Assembly, he headed the pre-election list of the Zartonk National Christian Party. Second on the list was far-right activist Vahagn Chakhalyan, who fought to prevent Armenia from ratifying The Council of Europe Convention on preventing and combating violence against women and domestic violence (Istanbul Convention).

Media.am covered the political activities of Zohrabyan and other activists defending national values in detail.

The initiative group was created on the basis of manipulations

Ara Zohrabyan published two Facebook posts (link 1, link 2) about coronavirus vaccinations, a new rule introduced by the government and the creation of an initiative group. In these publications, he made a number of wrong or manipulative statements.

❌ “The coronavirus is an artificial virus – this means that it was created and spread for some purpose.”

❌ “These vaccines have not been properly tested, which according to various experts requires at least 5 years.”

❌ “The use of fully untested vaccines at this stage is a classic example of medical experiments on humans.”

✔️ All vaccines used in Armenia are approved by the World Health Organization and the US Food and Drug Administration (link 1, link 2, link 3). The WHO emphasizes that in order for a vaccine to be approved, a “robust assessment of safety is carried out in the clinical trials and submitted to regulators for review.” Therefore, Zohrabyan’s assertion that “vaccines have not been properly tested” is unfounded.

As for Zohrabyan’s claim that “at least 5 years are needed” for proper testing, in this case, he also does not present any justification. As we have already found out, the vaccines have undergone sufficient clinical trials to prove their effectiveness and safety and to be approved for use among the population.

Of course, coronavirus vaccines have been developed at record speeds. The reputable scientific journal Nature notes that this speed is the result of several factors: (1) research from previous years was used; (3) regulatory bodies worked much faster, allowing less time to be spent on bureaucratic tasks. Nature also predicts that such a successful experience will lead to vaccines being developed much faster in the future.

✔️ This assertion is also misleading. Zohrabyan forgot to mention that the effectiveness of another vaccine used in Armenia, Sputnik V, is very high – 90%, and against severe cases and death – up to 100%. This does not mean that a vaccinated person can not be infected. However, the main purpose of vaccines is not to eliminate infections, but to prevent serious cases and deaths.

❌ “Doctors do not have a common view on vaccines. Some consider them harmful to human health. It is said that they can affect the human genome. “

✔️ All reputable organizations in the field of health recommend vaccination. These include international organizations (WHO, European Medicines Agency), local (Ministries of Health, including the Armenian Ministry of Health), research (Harvard University, Oxford University, where the AstraZeneca vaccine was developed), etc.

Of course, there are people related to the healthcare sector who are against vaccinations. For example, Marina Khachatryan, a neurosurgeon and former member of the Yerevan Council of Elders, claimed that vaccines change a person’s gene, making boys gay. However, Khachatryan is not an infectious disease specialist, moreover, she is not an acting doctor. She left medicine and is actively involved in politics. In her political activities, Khachatryan often uses one of the most scandalous and well-spread tricks on social networks – anti-vaccination propaganda.

Although Ara Zohrabyan’s statements contained several manipulative and wrong assertions at once, dozens of media outlets spread his words without fact-checking. 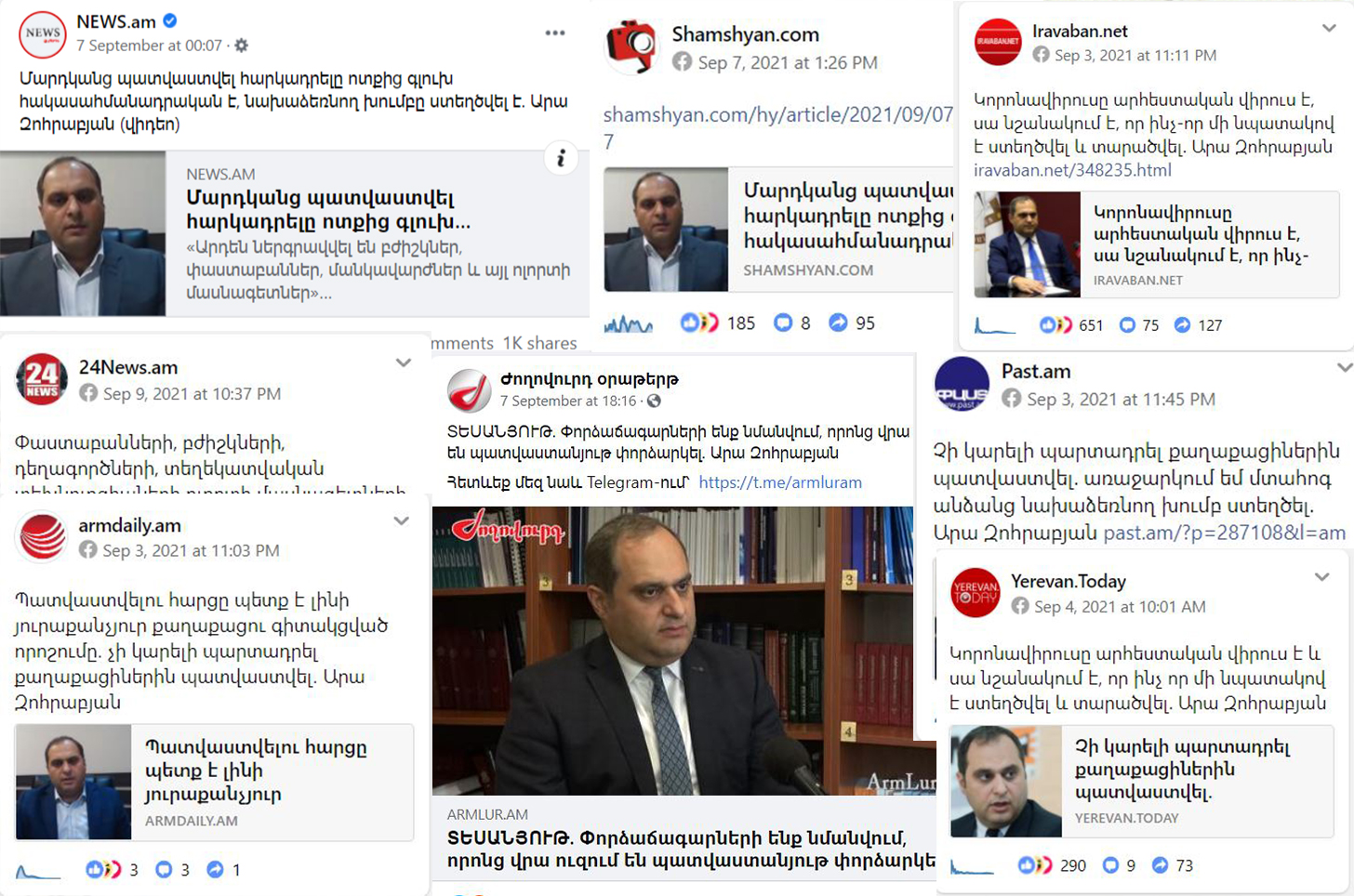 A number of politicians and public figures became members of the initiative group, including people who are either politically active or have a strong anti-vaccination position.

For example, Nune Nersisyan, the former director of the Masis Medical Center, became a member of the initiative, urging people not to wear masks (falsely claiming that it would cause oxygen starvation) and declaring without evidence that the number of deaths from the coronavirus was exaggerated. During the snap elections to the National Assembly, Nersisyan appeared on the list of former Prime Minister Hrant Bagratyan’s Freedom party.

Tigran Grigoryan, head of the “Healthy Spine” center, which offers physiotherapy services and massage, also became a member of the initiative group (Zohrabyan introduced him as a doctor without detailing his specialization).

Dmitri Harutyunyan, a participant in the Pre-Parliament national-political movement, is also a member. Although it is mentioned on Harutyunyan’s Facebook page that he graduated from Yerevan State Medical University, we could not find information about his medical activity. Harutyunyan’s Facebook page is full of anti-vaccination materials. He claimed that there had been many deaths from the vaccines and called on people to not become “guinea pigs.” He even started collecting signatures on Change.org, claiming that “the COVID vaccine has not undergone any serious testing,” although all vaccines used in Armenia have in fact passed many stages of testing and been approved by reputable healthcare organizations. Thus, AstraZeneca and Sinovac are approved by the World Health Organization (link 1, link 2), and Sputnik V is approved by the US Food and Drug Administration.

Thus, under the guise of protecting the rights of citizens, the leader of one of the parties disseminated manipulative and incorrect information about vaccines. He created an initiative group, which included people with a strong anti-vaccination position or political activity.