Politics VS Health: When Doctors Are Misleading 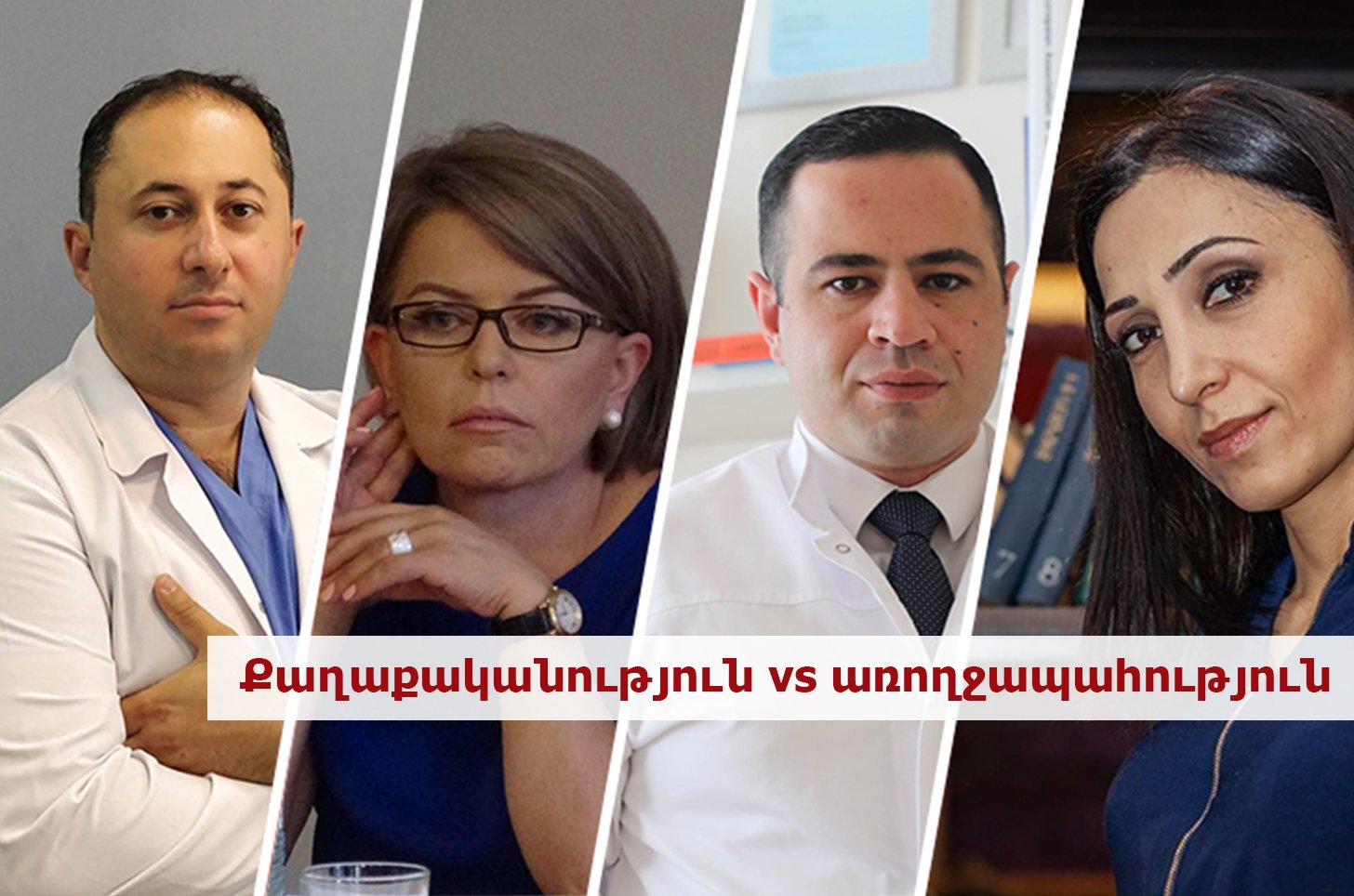 The coronavirus epidemic in Armenia has been a political matter from the very start, and this brought with it myths and false news.

Although the best thing to do in these conditions is to follow the advice of doctors, there were several medical workers in Armenia who have been actively spreading misinformation about the infection.

Media.am followed the activities of several such doctors and found out that their health advice on Covid-19 is often combined with a very strong political position.

Hayk Manasyan: An incorrect comparison of the coronavirus and influenza

Gastroenterologist Hayk Manasyan has always been active in the media field. He hosted a program on “Boon TV,” an online scientific-professional television channel, spoke about various diseases on social networks and gave interviews. His Facebook live videos covered not only health, but also political topics.

During the days of the coronavirus contagion, Manasyan’s live videos began to garner tens of thousands, sometimes over hundred of thousands of views.

Manasyan speaks in a figurative and emotional language. For example, in his latest live video, he called the Ministry of Health a “caricature,” arguing that if artificial respiration was not needed, the coronavirus could be treated on the street, “under a tent.” He also said that the coronavirus was “good luck” for Armenia, because “if it weren’t for this disease, more people would have died.”

Across all his various videos that combine politics and healthcare, one thread of thought is consistent: the coronavirus is not dangerous.

Manasyan insists that coronavirus is no more dangerous than the common flu. Meanwhile, in May, scientific research showed the opposite. The coronavirus is up to twice as contagious and 30-40 times more deadly than the flu. 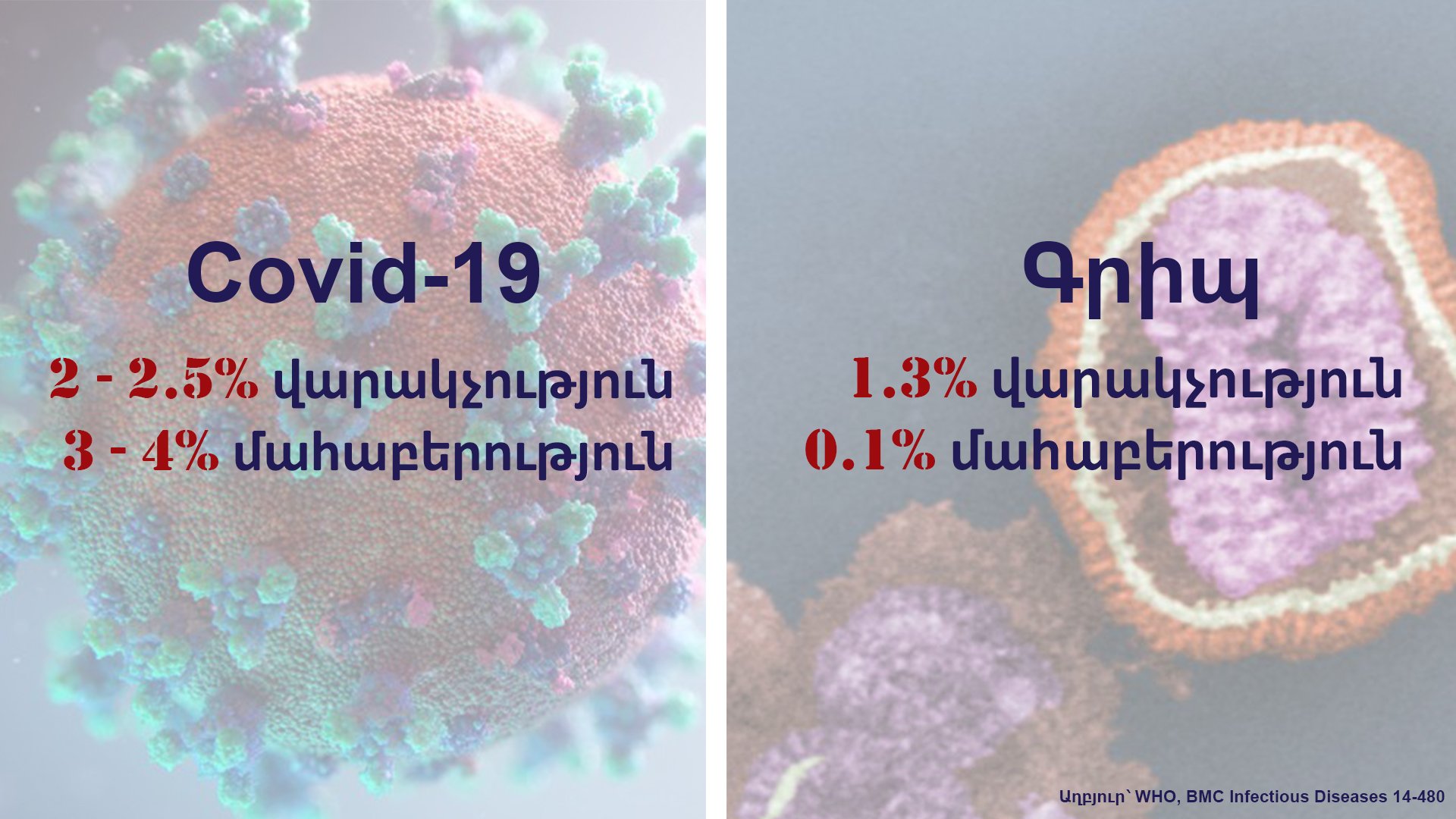 Manasyan often makes predictions. For example, he predicted that the epidemic in Armenia is beginning to stabilize and die off. But he does not bring any specific calculations, sources, or other justifications to the table, he simply makes assumptions.

Nune Nersisyan is the former director of Masis Medical Center. A few years ago, she came to the attention of the press in an unusual way by testing the employees of the MC that she headed. In the place of a urine sample, she had given tea, and then shared the results of the urine analysis.

Nersisyan is a strict critic of the Ministry of Health. However, her criticism is often accompanied by false news and manipulative theses. Thus, she claims that Covid-19 is an artificial virus, spreading the conspiracy theory revolving around Bill Gates.

Nersisyan also spread misinformation that people are being offered money in morgues in order to mark the cause of death as having been the coronavirus. The fact-finding platform compared the spread of this information to the broken telephone game. Nersisyan had heard the news from a Facebook friend who had heard it from their acquaintance.

Media.am spoke with another user who had shared this information, but this user also failed to provide any source or additional information.

Taking advantage of her status as a doctor, Nersisyan urges citizens not to wear masks and claims that the coronavirus is part of a scheme to cancel the constitutional referendum. Nersisyan also makes a political statement, as well as characterizes the government as “Sorosians,” repeating the conspiracy theory about George Soros.

In May, it became known that Arsen Torosyan had filed a lawsuit against Nune Nersisyan. Torosyan demanded a retraction of defamation, as Nersisyan posted on a screenshot of an article published on Medmedia.am’s website entitled “The Minister is increasing the number of people treated in hospital: The more patients there are, the more funding.”

Nune Nersisyan’s statement about offering money to relatives in morgues was spread by the Medmedia.am website, which was founded by urologist Gevorg Grigoryan. Grigoryan is also the founder of the Armenian Association of Young Doctors. He is the brother of Grigor Grigoryan, the former head of the SFSS.

Grigoryan has an active political position. Back in March, he along with Ani Hovhannisyan, editor of Analitik.am website, and Tigran Atanesyan, Narek Malyan’s lawyer and leader of the “Veto” extremist conservative group, founded the “COVID-19 Armenia: fact-finding group” initiative.

Another of Grigoryan’s initiatives, Medmedia.am, presents itself as a health website, but often spreads manipulative or false news, including information that is dangerous to public health.

In early June, the British periodicals openDemocracy and The Guardian wrote about this site. OpenDemocracy found out that Grigoryan had received a grant from the US Embassy to create the website, and, in fact, the website disseminating misinformation about Covid-19 in Armenia was funded by American taxpayers.

Following the announcement, US Ambassador Lynne Tracy announced that the embassy was suspending funding for the site.

Marina Khachatryan: all conspiracy theories in one place

Marina Khachatryan is a neurosurgeon and a former member of the Yerevan City Council.

In February 2018, Khachatryan, along with another member of the “Yerkir Tsirani” party, Sona Aghekyan, tried to bring Taron Margaryan a container full of sewage, after which a fight broke out in the hall.

In 2019, Khachatryan announced that she was quitting her job as a doctor.. Since then, she has focused more on political activity, but has repeatedly used her reputation as a doctor to spread unverified or false news.

As a doctor, she actively disseminated disinformation about the human papillomavirus vaccination (and immunization in general) From the very first days of the coronavirus contagion, Khachatryan described the infection as Bill Gates’ conspiracy plan, and later linked it to 5G telecommunications networks.

In May, Khachatryan even posted a series of Facebook live tours of Yerevan’s districts, showing the 5G towers secretly installed during the quarantine (the three Armenian mobile operators issued a joint statement confirming that a 5G network does not exist in Armenia).

Thus, several former and current medical workers in Armenia regularly spread half-truths and misinformation about the coronavirus epidemic. All these doctors are involved in political processes in one way or another, conduct political activities or have a strongly expressed political position.