Vaccines Against COVID-19: The Media In Armenia Provided A Platform For Misinformation 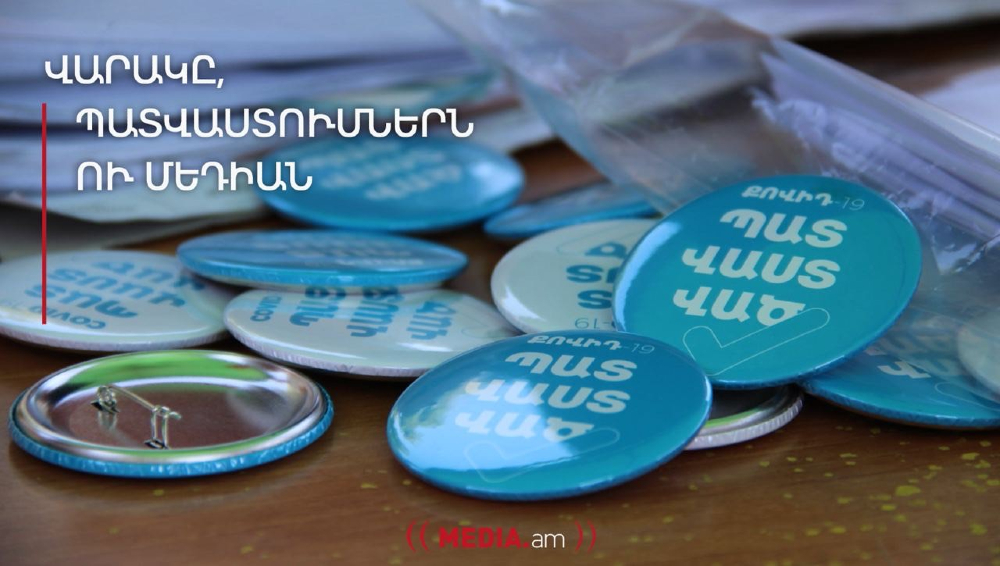 Vaccinations against COVID-19 were launched in Armenia on April 13. The very next day, the Minister of Health announced in the National Assembly that by the end of the year it will be possible to vaccinate about 20% of the population, i.e. about 600,000 people.

More than two months later, only 88,000 people were vaccinated, and it is not known how many of those vaccinated are permanent residents of the country and how many are tourists, to whom Armenia also offers free vaccinations. If this slow pace of the process continues, it will not be possible to reach even the modest index mentioned by the minister by the end of the year.

The slow progress in vaccinating the population can hardly be considered a coincidence. The COVID-19 epidemic had not yet begun, but vaccinations were already a major topic of political and media speculation in Armenia. For several years, activists and politicians have been spreading misinformation about vaccines, using platforms provided not only by social networks but also by major media outlets.

Back in 2019, the Armenian media field was spreading alarming but false news about the human papillomavirus vaccination – Gardasil. For example, in May 2019, Channel 5 aired the “Forced Vaccination? They are silent in the polyclinic” report, which said that the students of one of the schools in the city of Abovyan were forcibly and deceptively vaccinated with Gardasil. The material was based on the story of one person, a school physical education teacher, whose claims had not been verified by Channel 5. The teacher claimed that Armenia had received a “grant,” imported medicine and “now we even have people who say that the medicines are expired.” After the release of the sensational video, this teacher confessed on his Facebook page that the information did not correspond to reality.

This is just one example of the flow of misinformation surrounding the human papillomavirus program. Myths and misinformation were spread not only by the media and Facebook crypto users but also by people who call themselves doctors. Thus, neurosurgeon and former member of the Yerevan Council, Marina Khachatryan, was actively spreading anti-vaccination propaganda. Referring to the doctor’s knowledge, Khachatryan spread conspiracy theories about Gardasil, submitted a report on a crime concerning Gardasil to the National Security Service and announced that the purpose of vaccinations was to “attack” human lives.

The statements made by Khachatryan and others were not new: These were mainly the anti-vaccination narratives spread around the world, which the activists took from the Internet and distributed in Armenian. Moreover, in order to spread this content, they used not only social networks but also the platforms provided by the media with a wide audience. For example, in December 2019, Marina Khachatryan held a press conference and, addressing parents, announced that the vaccine “changes the genetic code of your child.” Thus, vaccines increase the number of “homosexuals,” said Khachatryan, combining her anti-vaccination campaign with another easily exploited topic, homophobia. 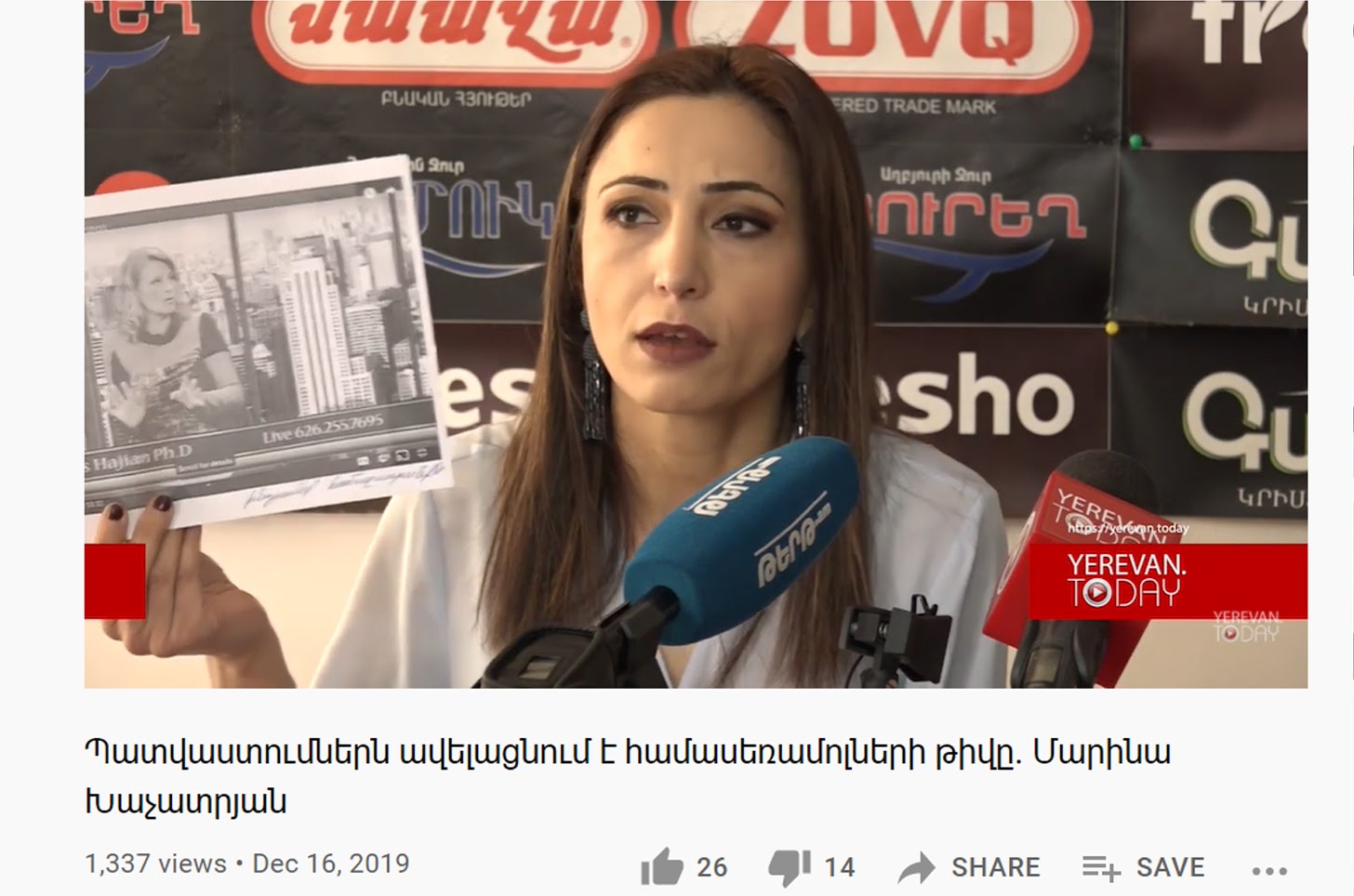 During the press conference, Khachatryan said that she had taken the information from American doctors and showed a video of a woman with the words “Bedros Hajian, PhD” written on it.

Bedros Hajian is an active user of social networks. He lives in the United States and disseminates information in both English and Armenian. He is a supporter of conspiracy theories, a fan of former US President Donald Trump and a critic of vaccines. Hajian also has a YouTube channel, from which Marina Khachatryan took the mentioned shot from one of the videos in Armenian. The nearly hour-long video made false claims about vaccines (for example, that they contain harmful doses of metals).

In other words, the false information about vaccinations first appeared from a Diaspora Armenian user living in the United States, who actively spreads conspiracy theories, and then from Marina Khachatryan, who lives in Armenia, who, by presenting a doctor, propagates misleading information about health. Finally, Khachatryan’s unsubstantiated allegations were made during a press conference and reached a wide audience through the mainstream Armenian press. 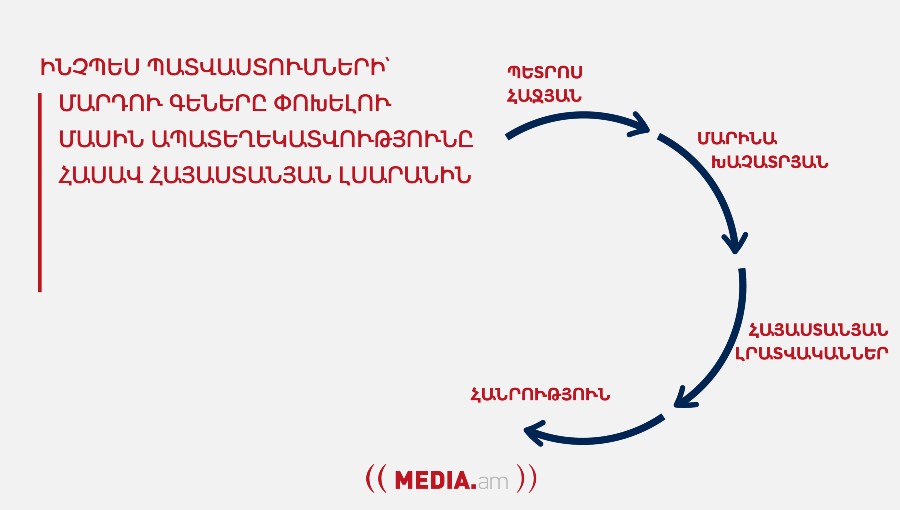 In a conversation with Media.am in July 2019, former Minister of Health Arsen Torosyan commented on the impact of the anti-vaccination campaign on the immunization program. “It has definitely had a negative impact, it has had an obvious negative impact, and we will eventually dispose of most of those [already purchased] vaccines,” the minister said. In other words, the disinformation campaign against vaccines in 2019 led to the fact that Armenia could not distribute the vaccines purchased for its citizens.

The first case of a new coronavirus was diagnosed in Armenia in March 2020: Prime Minister Nikol Pashinyan informed the public about it through a Facebook post. The infection quickly spread throughout the country, but the Armenian society and government failed to keep this health issue within the framework of the health discourse. The coronavirus quickly became a political topic and a source of speculation. Instead of informing the public about vaccines and explaining important information about them, many media outlets and mushroom websites became involved in spreading myths.

On April 6, when the restrictions due to the coronavirus had just entered into force, ArmNews TV broadcast a 45-minute interview with two former Yerevan Council members, Marina Khachatryan and Sona Aghekyan, who had repeatedly spread misinformation. In the headline, the media claimed, “The Coronavirus is a World Fake.” During the interview, the guests said that the epidemic was already extinguishing (while it was just beginning), claimed that the vaccines cause infertility (which is false information) and, though it is unclear on what grounds, they warned that Prime Minister Pashinyan could organize a “terrorist attack” in Armenia after the quarantine.

Months after this interview, COVID-19 vaccines began to be used around the world. The British-Swedish AstraZeneca became a target of misinformation in different countries. Although severe side effects are extremely rare after AstraZeneca, the media is flooded with scary news. Some claimed that people had died from AstraZeneca (although the link between death and vaccination had not been established), and others published unverified reports of side effects.

Thus, in May 2021, the channel ArmNews TV reported that former Taekwondo world champion Dave Meyers lost his leg after receiving AstraZeneca. The channel almost literally translated this article from the Russian site Московский комсомолец but omitted the part where the doctors said that the connection between the missing leg and the vaccine had not been established.

The source of this news was the publication of the athlete’s relatives on the Internet, after which the British yellow press wrote about the incident. Then the material was reprinted on the Russian website and finally reached the Armenian audience through ArmNews. 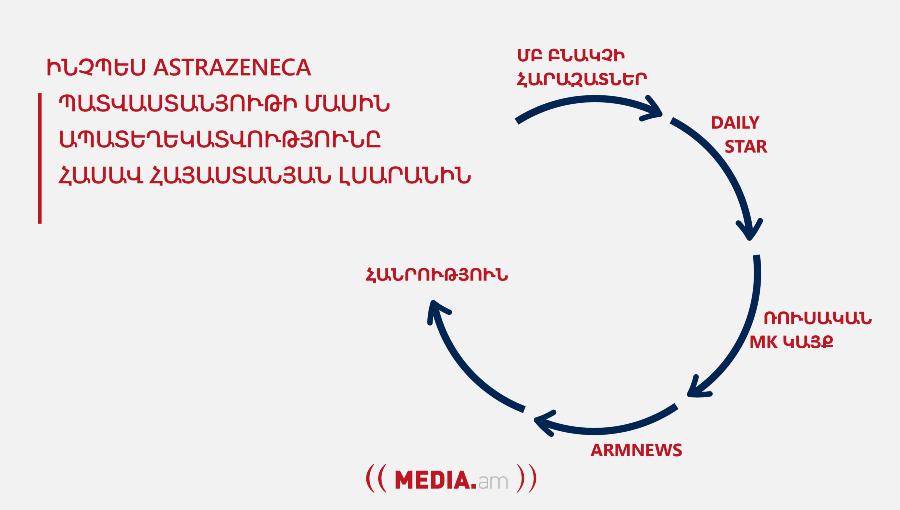 As in the case of Gardasil, COVID-19 vaccines have also become the target of political activists in medial uniform. For example, urologist Gevorg Grigoryan expressed suspicion that the Minister of Health was not actually vaccinated, as the syringe is not visible in the video. However, the syringe was clearly visible in different shots of the video. Marina Khachatryan announced that “they” created the virus in the laboratory, just like the AIDS virus. Khachatryan’s claims about these “them” who created the viruses were not substantiated, but that did not prevent those claims from appearing on the websites of major news outlets.

The state is trying to counteract the information campaign, but the collective immunity is in an uncertain future

The Ministry of Health also complains about this flow of misinformation. Hripsime Khachatryan, the spokeswoman for the Ministry of Health, told Media.am that the Armenian media often conveys misinformation spread in the international press to the local audience. “You switch on [the news], and there’s a block of ten “tiny” news items, two of which are always anti-vaccination. For example, [you can see] negative information about AstraZeneca from the international press which had already been denied three or four days before,” said Khachatryan.

To counteract this flow, the ministry is conducting an information campaign involving both traditional and online media.

“If we run after every piece of misinformation, our struggle will take the wrong direction,” said Hripsime Khachatryan. “We are just trying to fill the field with the right information, healthy information.” According to Khachatryan, the state works with journalists covering the healthcare sector, conducts training sessions for them, and keeps in touch with international organizations. “We provide a multifaceted flow of information and do not centralize all this in the capital,” said Khachatryan.

It is difficult to understand how effective this campaign is. According to Hripsime Khachatryan, it is necessary to pay attention not only to the number of vaccinated people (which exceeded 80,000 in early July) but also to the accelerating process. “We are already vaccinating 3,000 people a day,” said Khachatryan.

Although the rate of vaccinations is indeed growing, it is not known how many of those vaccinated are permanent residents of Armenia and how many are tourists, to whom Armenia also offers free vaccinations. Moreover, society is really protected from COVID-19 when there is a collective immunity, that is, the majority of the population (at least 70-80%) is vaccinated, and the virus, having no “place” to spread, retreats.

However, collective immunity must be achieved quickly so that the virus does not penetrate and the strains against which the vaccines are ineffective appear. The more time we give for the virus to spread, the more different mutations we will see. Therefore, even if Armenia can achieve the goal set by the Minister of Health and vaccinate 20% of the population by the end of the year, it will still not be enough to stop the spread of the virus, as it will take years to achieve collective immunity.

Conspiracy theories or false news about COVID-19 vaccines are spread across different countries and generally fit into the same narrative․ The virus was created by powerful conspirators to force us all to get vaccinated with drugs, the danger of which is ignored or hidden. These and other similar stories offer easily spread sensations, and the Armenian media, ignoring the fact-checking case, often translate them for the local audience.

Such misinformation manipulates facts and offers seemingly logical explanations for complex phenomena. This approach puts critical thinking to sleep and teaches skepticism, to always look for a secret evil conspiracy behind everything.

Often the most active proponents of such information are individuals or small platforms who believe that doctors and governments do not know the truth about coronavirus. However, those who spread such allegations in Armenia received the support of major media outlets and were able to make their voices heard by the general public, thus supporting the dissemination of information that has no scientific basis and is dangerous to public health.

Sources and methods used to create this article