Facebook Posts That Become News: The Media Covered The Coronavirus With Political Posts 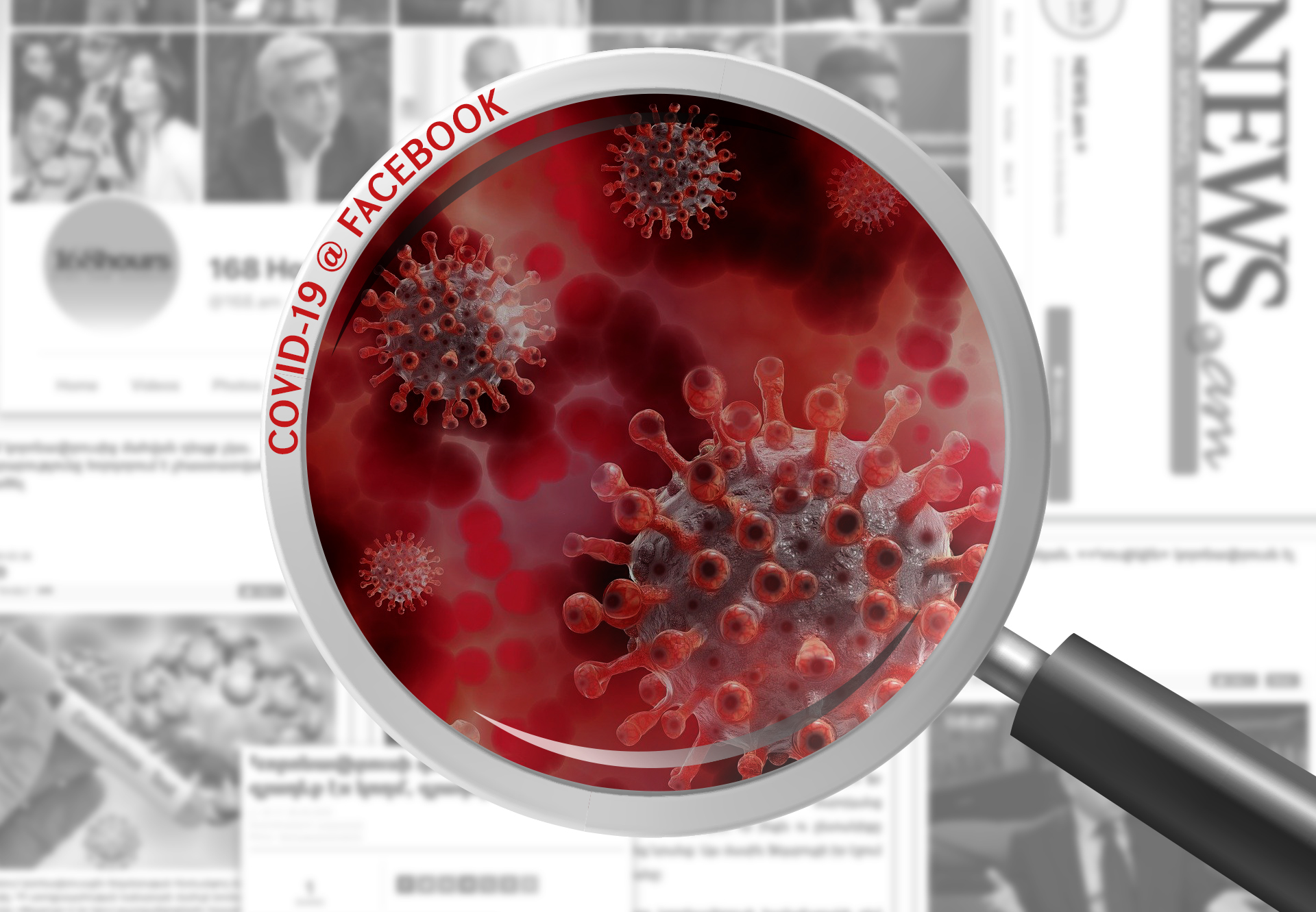 The Media Initiatives Center (MIC) conducted research in 2020 studying the three main topics on the Armenian agenda at the time:  the coronavirus, the Artsakh issue and the Lanzarote Convention.

The research revealed that the coronavirus has received a political framework in Armenia, and most of the materials presenting the epidemic in a political context are copied from other sources.

Interestingly, 41% of the articles studied were based on the opinion of a third party, and 31% were entirely third-party speech, mainly copied from social networks or other media. Only 15% of the materials contained a journalists’ analysis.

In light of these findings, we looked in more detail at the data collected with the MIC survey to find out what sources journalists used to cover the coronavirus.

We downloaded more than 11,000 texts from News.am and 168.am websites and singled out the hyperlinks contained in them. It turned out that media outlets often refer to Facebook users or pages. In this article, we will discuss which Facebook users were the main newsmakers on the topic of coronavirus last summer.

Although the MIC survey also covered Tert.am, it was not technically possible to obtain complete data from this site. That is why Tert.am is not considered in our article.

In another article, Media.am spoke about which news sites became the most frequent sources of information for the websites News.am, 168.am and Tert.am.

168.AM: The most cited experts on the coronavirus were political scientists

We have downloaded and studied 5,164 articles from the 168.am website to find out what sources the media outlet used to disseminate information. We have singled out the Facebook hyperlinks found in the articles. The data of the sub-website blog.168.am were also taken into account.

We researched the Facebook pages cited in 950 articles and divided them into six groups:

The most quoted sources of 168.am by sections

The official state sources were quoted the most. 207 of the links are from the Facebook pages of various experts, activists and journalists. Opposition politicians were quoted another 142 times.

It is noteworthy that the most frequently quoted experts are political scientists: Their posts make up more than 25% of all links in this section. At the same time, healthcare professionals were quoted in only 10% of cases. These indicators may show that the topic of the coronavirus has been politicized in Armenia. That is, it has been more a political discourse than a health-related one.

Experts in the field of journalism and media (23%), activists, civil society representatives (10%), as well as lawyers (8%) are among the most cited experts. In 4.4% of cases, the websites referred to the posts of far-right activists.

As for the opposition politicians, almost half of all the links in this section, 49%, were made to the Facebook pages of the Republican Party or former members of the faction. In 7% of cases reference was made to members of the “Prosperous Armenia” party, and in 5% of the cases to “Bright Armenia.” In the case of other parties, the citations were 2% or less.

If we do not divide the articles containing links into categories, we will see that 8 of the 10 most quoted Facebook pages of 168.am are official. Three of them are connected with the Ministry of Health. The Facebook pages of former Minister Arsen Torosyan, his speaker Alina Nikoghosyan and the Ministry of Health have been quoted 126 times, they make up about 13% of all citations.

Among the unofficial sources, the most-quoted materials came from the Facebook pages of RPA Vice President Armen Ashotyan and the head of “Politeconomia” research institute Andranik Tevanyan. Andranik Tevanyan has previously worked in a number of news organizations, he is the founder and director of the website 7or.am. 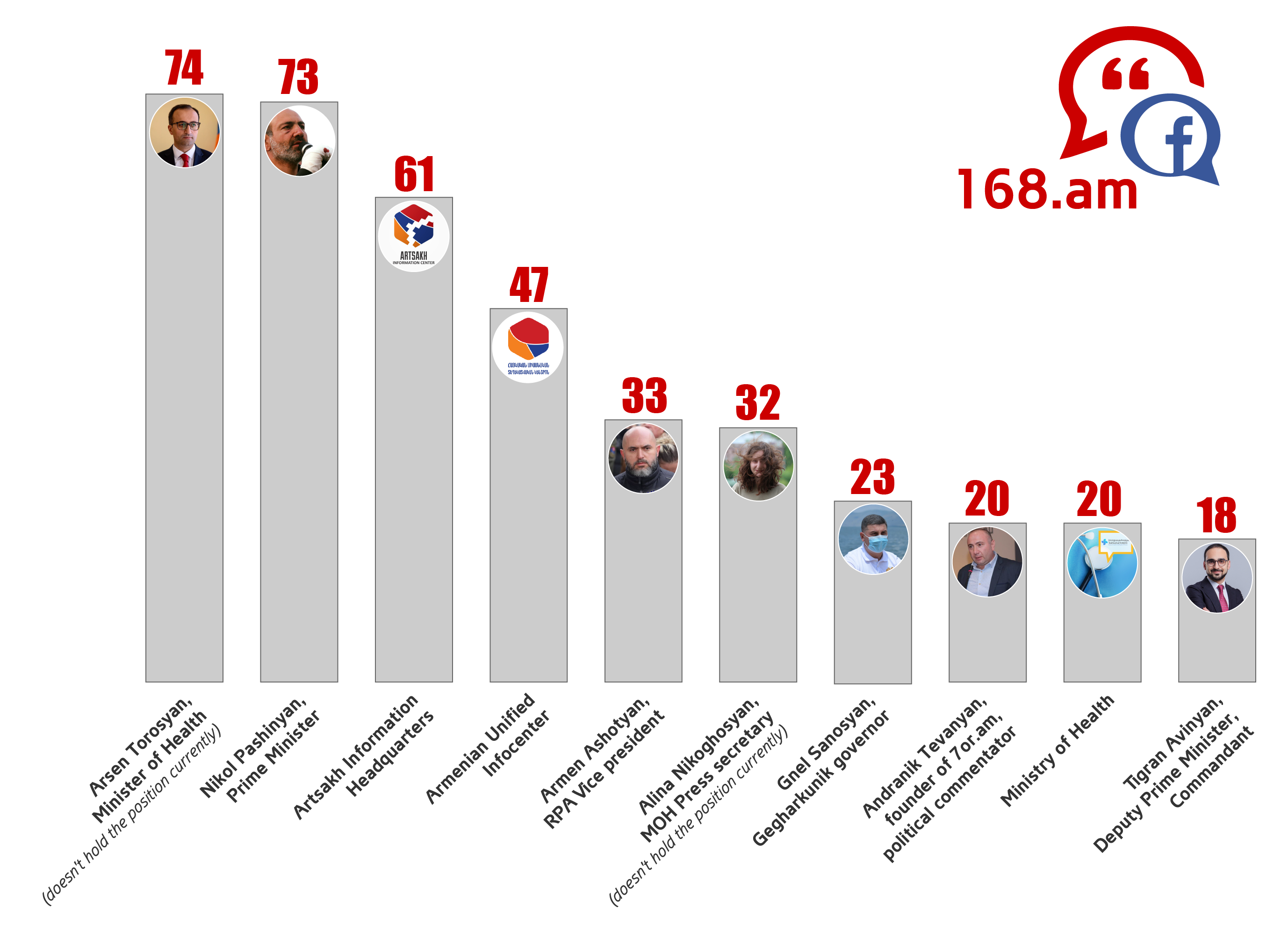 The pages of Defense Ministry spokeswoman Shushan Stepanyan, as well as governors Andrey Ghukasyan and Garik Sargsyan (all three of them currently do not hold these positions) were among the official sources which were often cited but were not included in the top ten.

NEWS.AM: The majority of the most-quoted Facebook pages are official

We reviewed 6,505 articles in Armenian on News.am and singled out the hyperlinks. Most of them, 772, referred to Facebook, which is 12% of the total data surveyed.

We have singled out the Facebook pages found in these articles and divided them into the same six categories: “Official,” “Opposition,” “Non-political,” “Experts,” “International” and “Other.”

The official sources were quoted the most – 469 times. Opposition politicians have been quoted 110 times.

Almost the same number of references were made to experts, 109 times. It is interesting that as in 168.am, the posts of healthcare specialists made up only 11% of the “Experts” section.

Instead, more than 30% of the links were from political scientists, another 27% from journalism and media professionals, and 10% from lawyers.

In the “Opposition” section, News.am had the most references to figures associated with the Republican Party (15%). The members of “Prosperous Armenia” (12%) and “Bright Armenia” (14%) party or faction were quoted almost as much.

In the case of both 168.am and News.am, the vast majority of official sources, about 24%, are references to the Ministry of Health or its staff.

The most quoted sources of News.am by sections

The most quoted unofficial sources are the Facebook pages of former Prime Minister Hrant Bagratyan and the head of the “Politeconomia” research institute Andranik Tevanyan. 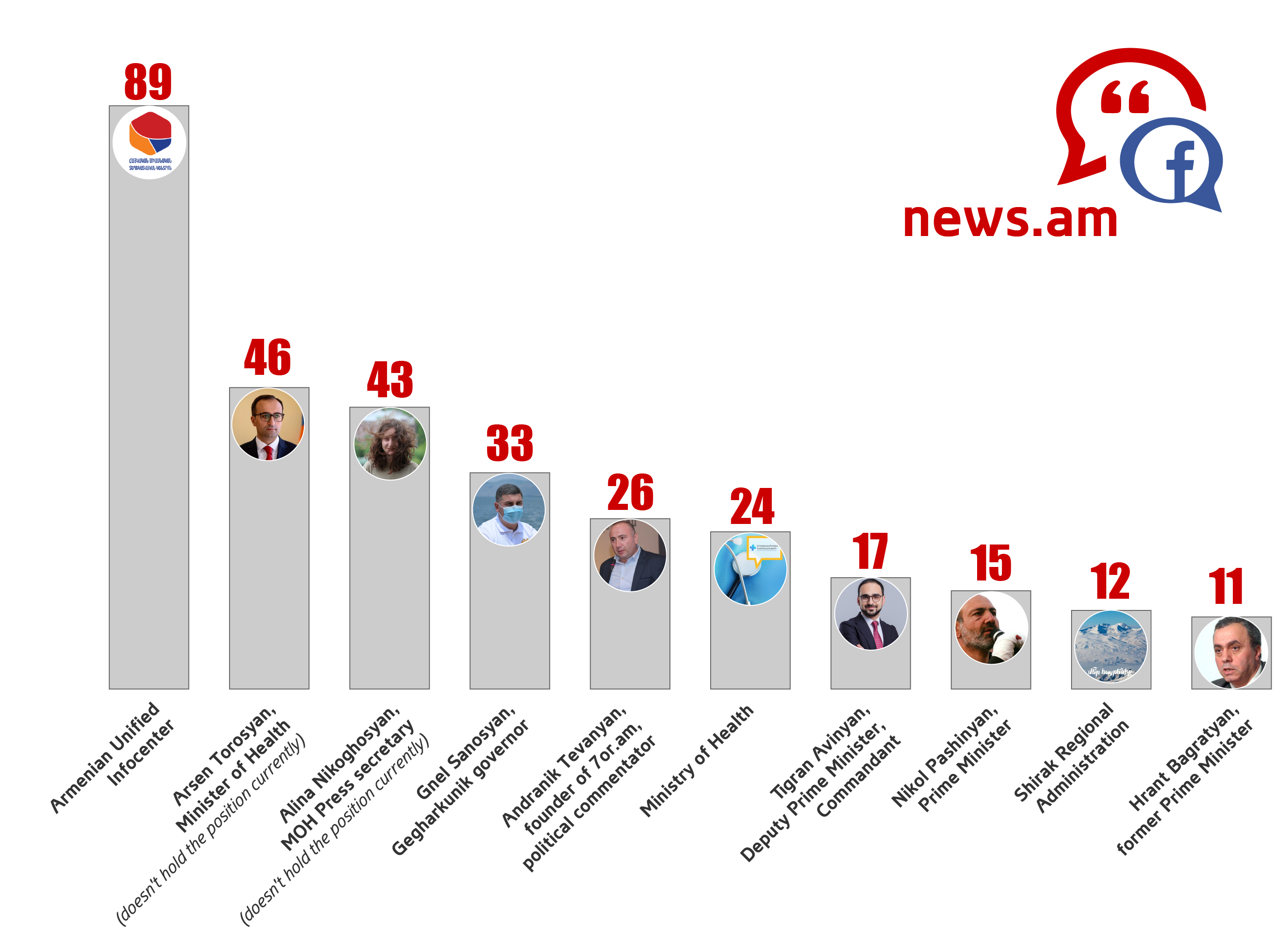 What narratives were circulated by official sources?

The information circulated by official sources was mostly neutral and referred to the spread of the infection and anti-epidemic measures. Prime Minister Pashinyan’s speech, however, had peculiarities.

Representatives of the Ministry of Health posted on Facebook mainly about coronavirus statistics (newly confirmed cases, deaths, etc.), urging citizens to follow certain advice, and share information about the anti-epidemic measures taken. There were also denials of the information spread in the press.

In Facebook posts and “live videos” rewritten by websites, Nikol Pashinyan presented the epidemic situation, discussed government decisions, economic issues, and support measures. He urged to follow the anti-epidemic rules and in the early stages of the epidemic often referred personally to the number of infected people, talking about their well-being. Pashinyan expressed confidence that Armenia will get out of this situation stronger.

The Prime Minister was in a hurry to announce positive news about the large number of negative tests, the good economic situation (“we are one of the countries with the lowest inflation in the world”) and so on.

Pashinyan had decided to reward the first patient with coronavirus, as he “rendered a very serious service with his high consciousness and helped the infection not to spread too much.” And, for example, on April 8, Pashinyan reported that there were only 28 positive tests and noted that “about 90% of patients do not even have a fever,” and if this continues, “it will mean that we have overcome the peak of the coronavirus.” This, of course, was only the beginning of the epidemic, and later Armenia had between several hundred to a thousand cases a day.

Sometimes the Prime Minister made contradictory appeals. He called for the coronavirus to be treated as a dangerous disease, but reminded that “the coronavirus will not scare us,” and in another “live” that one way or another we will all be infected․ “There is a hypothesis circulating in the international press that many, if not all of us, will be infected with the coronavirus.”

Pashinyan also criticized the previous authorities. He called the Constitutional Court a “coronavirus court,” where “they’ve been saved, they are gaining time thanks to the coronavirus.”

The government set up the AUI in March 2020 to provide information on the coronavirus. The posts of the center mainly informed about the epidemiological situation (new cases, deaths, treated citizens, etc.). There were also announcements about government decisions and restrictions.

The posts of the Artsakh Information Headquarters mainly informed about the epidemiological situation, as well as about the measures taken by the government (restrictions, checks, disinfection, etc.). The headquarters often urged to follow only the official news to avoid false and unverified news.

The posts copied from the Facebook page of the governor of Gegharkunik referred to the epidemic situation: the positive cases registered in the region, the deaths, the number of recovered people. Sanosyan also shared information about cases of infections and which settlements of the region they were found.

In addition to Sanosyan, the websites also shared the posts of the governor of Ararat Garik Sargsyan and the governor of Lori Andrey Ghukasyan (they are no longer in office).

What narratives were circulated by unofficial sources?

Two of the unofficial sources in the top ten most cited are politicians and one is an expert with a strong political position.

Ashotyan wrote that the country is “a nuthouse,” predicted a “collapse” and devastating consequences. He also spread unverified news (“Rumors are circulating that the commandant has resigned”).

Andranik Tevanyan is one of the supporters of the opposition “Homeland Salvation Movement” initiative. His political position was also evident in his posts on the coronavirus. Tevanyan considered the government incompetent, especially in times of crisis, and criticized the government for not taking strong enough measures against the infection.

Tevanyan considered that the source of this power is the crowd, not the people. According to him, “the government is also insane,” it was given to the “propaganda of hatred” and provokes hostility in society in times of epidemic. Tevanyan was convinced that a new, more experienced government with a new prime minister was needed.

Tevanyan considered Georgia a good example of fighting the epidemic, emphasizing that the Georgian Prime Minister spends less time on Facebook than Pashinyan.

In March 2020, the former Prime Minister claimed that the coronavirus situation in the country was “terrible” and compared the situation with Georgia.

Bagratyan presented the steps that, in his opinion, the government should take, but he did not substantiate his advice in any way. For example, Bagratyan proposed banning all employers from firing any employee for six months. Bagratyan did not detail how such a ban could be implemented. In another case, he offered to publish the photos and short biographies of all the infected citizens, and if the citizens do not agree, “to adopt a law in the next 2-3 days that makes it mandatory.”

There were many similar pieces of advice in Bagratyan’s posts. They referred not only to economics, which is Bagratyan’s professional field but also to purely health measures.

Thus, the data we have studied show that Facebook has been one of the main platforms for gathering information about the virus for news sites.