The News Matryoshka Doll: News Is Copied From Russian And Local Sources 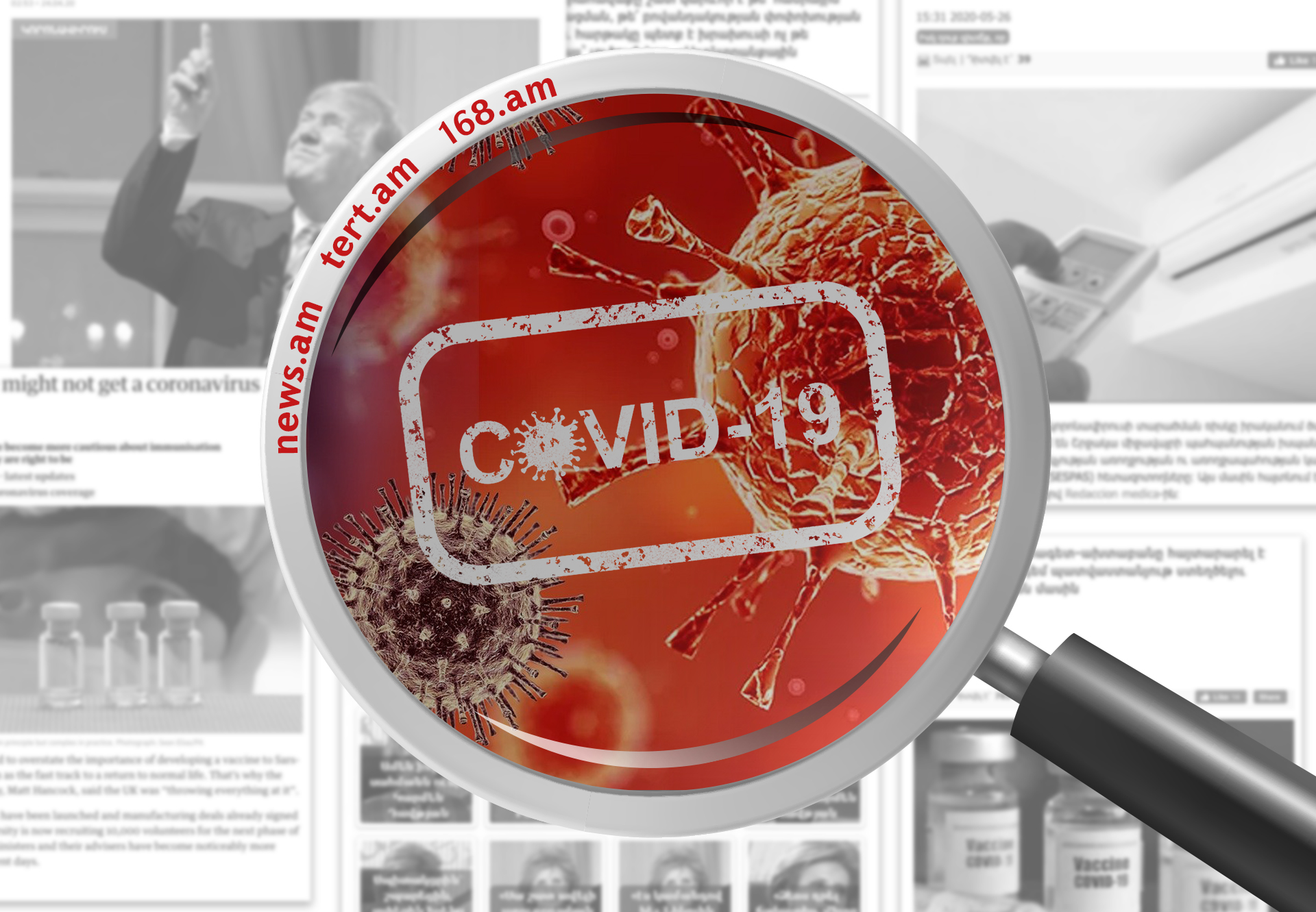 The Media Initiatives Center (MIC) conducted research in 2020 studying the three main topics on the Armenian agenda at the time: the coronavirus, the Artsakh issue and the Lanzarote Convention.

In this article, Media.am examined the sources of articles on the coronavirus of the three sites monitored in the MIC survey: News.am, Tert.am and 168.am.

The MIC survey found that most of the articles published during the selected period were copied from social networks or other media. Only 15% of the materials contained a journalists’ analysis.

In another article we discussed which Facebook pages were most referred to by News.am and 168.am. And in this article, we will find out which news sites became the most frequent source of information for News.am, Tert.am and 168.am.

We have categorized the news sources by regions, taking into account their country of origin. International media are also categorized according to the country in which it was established, regardless of whether the link was made to the main site of the media or to its branches operating in another country. For example, Reuters was classified as a British media outlet and Sputnik (Спутник) as a Russian one.

We reviewed News.am with 6,505 articles in Armenian containing the words “coronavirus” and “covid,” from which we selected materials containing hyperlinks, excluding links to Facebook:  We discussed Facebook sources in our previous article. As a result, we were left with a list of 1,156 hyperlinks, 86% of which (994 links) were made up of news sites.

News.am referred to Russian news outlets the most – 281 times, which is 24% of the total links. More than half of these links were to the major state news agencies TASS (90 links) and RIA Novosti (60 links).

The British media were in second place in terms of the number of links (234 links). It should be taken into account that, as in the case of Russian websites, the vast majority of these links, 37%, are not from purely British media, but from a major international news agency, Reuters. The image is the same for American sources: 22% of 161 links are to the Associated Press.

News.am quoted the publications about the coronavirus in the press of the countries of our region with different frequencies. The website quoted the Iranian media 31 times, Georgian, 21 times, 6 of which were links to the Georgian branch of the Russian state agency Sputnik. The website did not quote Azerbaijani media and referred to the Turkish press only twice.

News.am has referred to the local press on coronavirus publications 122 times. The five most-cited websites are 168.am, hetq.am, shamshyan.com, yerevan.today and hraparak.am.

Thus, News.am most often takes the information from the Russian TASS news agency. However, out of 90 articles referring to TASS, only 12 referred to Russian news. Most of the articles (61) referred to events in different countries, with the American news being the most frequent (11 times).

In other words, information about different countries reached the Armenian reader through the “mediation” of the Russian state news.

In 14% of the articles, News.am quoted TASS, and TASS, in its turn, quoted some other news. For example, one of the articles said, “US President Donald Trump believes that the Chinese authorities have apparently mistakenly allowed the spread of the new coronavirus. The American leader stated this on Fox News, TASS reports.”

In the case of this site, 5,164 articles in Armenian containing the words “coronavirus” and “covid” were studied. The data of the sub-website blog.168.am were also taken into account. 860 hyperlinks were separated from the articles, of which 723 (84%) were from another news site. Links to Facebook were excluded.

Unlike News.am, the majority of 168 sources are local. The site referenced Armenian media 549 times, which is 76% of all media links.

The most quoted news outlets were news.am – 281 times, as well as armenpress.am, tert.am, artsakhpress.am and hraparak.am. In both cases, 168.am quoted the publications of local mushroom websites.

From foreign media, 168.am referred to Russian sources the most – 141 times, mainly to the Armenian branch of the Russian state agency Sputnik – 128 times.

The website has referred to the news of other countries only 34 times, which is less than 5% of the links.

When it comes to countries in the region, 168.am refers only to Georgian (3 times) and Azerbaijani (3 times) media.

Thus, the most quoted source of 168.am website is the Armenian News.am (281 times). Moreover, News.am’s sub-site covering health topics, Med.news.am, was most often quoted.

More than half of those articles, 158, also have a second or third source. The most frequent such sources were RIA Novosti (15 times), The Daily Mail (11 times) and TASS (10 times).

For example, in the article “What is the real risk of spreading coronavirus through air conditioners” 168.am completely copied the text of News.am, which in turn took the information from RIA Novosti, which also referred to the edicionmedica.com.co website.

In some cases, 168.am reproduced unverified or incorrect information. For example, the article “German expert-pathologist stated that it was impossible to create a vaccine against the coronavirus” published in May was based on information published by the Russian-language mushroom website med-heal.ru. Of course, in May there was no belief that eventually a vaccine would be created that would be both effective and harmless. However, an article published on the mushroom website stated that it was impossible to make a vaccine, even though the vaccines were already being tested.

In the case of Tert.am, it was not technically possible to download the complete data from the site. That is why our methodology of studying Tert.am differed from the previous two cases. At News.am and 168.am, we highlighted the hyperlinks found in articles about coronavirus. However, in the case of Tert.am, the sources mentioned in the title of the articles were separated. For example, we have separated the newspaper Hraparak as a source of information from the headline “‘Hraparak:’ Are coronavirus tests ending? The government is showing signs of panic.”

We reviewed 5,968 articles in Armenian by Tert.am containing the words “coronavirus” and “covid.” We have selected 1,148 references from other news sites from the titles of these articles.

As with the list of sources of both News.am and Tert.am, Russian news outlets are most often found – 355 times, which is about 31% of the total sources. The vast majority of these citations, 75%, were made by two major state news agencies, RIA Novosti (184 times) and TASS (82 times).

American and British media make up 22% and 17% of Tert.am sources, respectively.

The most quoted American source is CNN, and the British – Daily Mail. Interestingly, the Daily Mail is a tabloid, that is, it often has sensational content.

Tert.am quoted local media 202 times, which is 17% of the sources. Most often the website referred to “Hraparak” newspaper 69 times, then to “Past,” “Zhoghovurd”, “Irates” and “168 Zham” news outlets.

Thus, the most quoted source on Tert.am is the Russian state news agency RIA Novosti – 184 times.

Of those articles, 36 referred to Russian news and another 9 to world news (for example, UN or WTO statements). 129 articles reported on events in third countries, 24 of which were about the United States and 20 about China. Our neighbors Azerbaijan, Iran, Georgia and Turkey were reported in 25 articles.

In some cases, the site provided incorrect or inaccurate information. For example, on April 24, Tert.am, citing RIA Novosti, published the false statement of former US President Donald Trump that the sun’s rays destroy the coronavirus in one minute. RIA Novosti noted that Trump did not say where he got such information from. However, Tert.am omitted this note while translating the article, as a result of which they presented Trump’s incorrect statement without warning the reader in any way.

Thus, in the case of News.am and 168.am, we studied the hyperlinks found in articles in Armenian about the coronavirus. We found out that if News.am referred to the Russian media the most, then most of the sources of 168.am were local. It is important to note that this data refers only to hyperlinks. That is, if the websites quoted a news item, but did not post a hyperlink to it, then that quote was not reflected in our data.

In the case of Tert.am, we have studied the sources mentioned in the titles of the articles in Armenian about the coronavirus. It turned out that Tert.am, much like News.am, most often referred to Russian media.