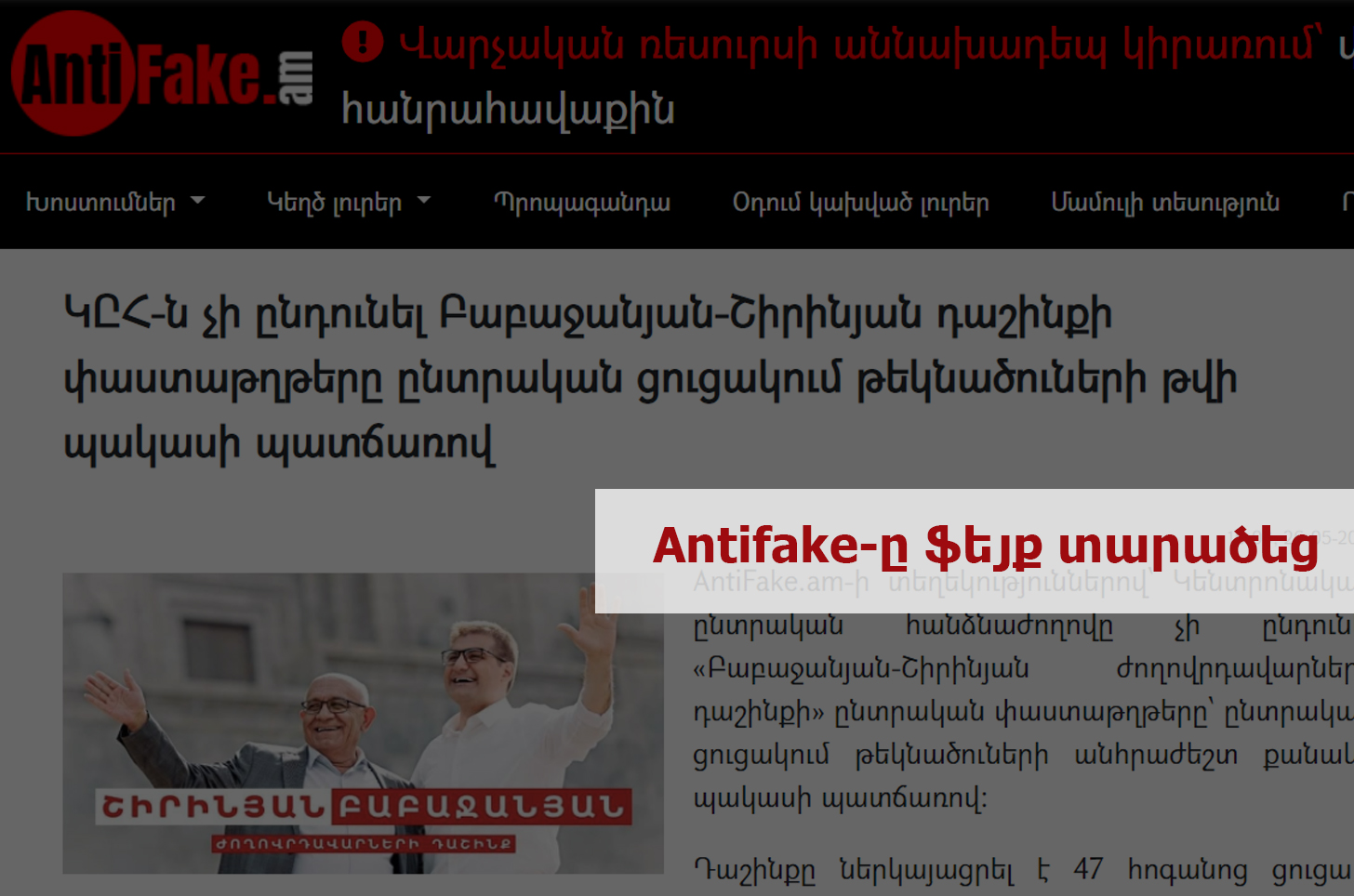 On the 26th of May, antifake.am website wrote “the Central Electoral Commission did not accept the election documents of the “Babajanyan-Shirinyan Alliance of Democrats” due to the lack of the necessary number of candidates in the electoral list”.

This information is false. In the Central Election Committee’s list of parties and alliances participating in the snap elections, the Babajanyan-Shirinyan Alliance of Democrats is also enlisted.

The information was published without being verified

Antifake.am wrote that “the Central Election Committee has not accepted the Babajanyan-Shirinyan alliance of democrats’ documents for the elections since they did not have enough candidates on the electoral list.

Antifake.am presents itself as an “independent and impartial” media platform, concerned with “fact-checking”. However, the website did not check this claim before publishing, saying that they “tried to check our facts with the CEC, however, they did not respond to our calls.” This claim was spread further by irakanum.am, yerkir.am, livenews.am and other websites. 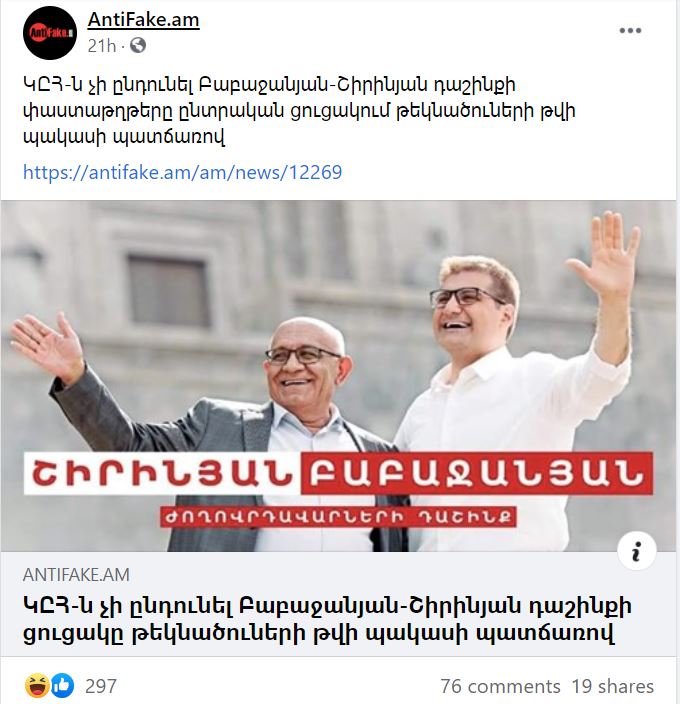 A couple of hours after the article was published, the Central Election Committee of Armenia announced the list of the participants of the upcoming elections on the 20th of June. 23 parties and 4 alliances were enlisted, including the Babajanyan-Shirinyan alliance of democrats. The alliance commented this misinformation on their Facebook page as well, claiming that their documents had been presented to the CEC in the appropriate manner.

Even though Antifake.am presents itself as a fact-checking platform, according to the investigative platform DFRLab, Antifake.am instead of checking the validity of information, spreads news that pursue political interest and often have manipulative nature. DFRLab noted that Antifake’s most engaged-with publications included biased political commentary, unverified news about Pashinyan visiting a non-existent factory, and anti-vaccine misinformation. Also, according to the DFRLab, AntiFake.am obscured purpose of their page, representing themselves as impartial and objective resources for the Armenian public. In addition, the news spread by this website have been debunked by authentic fact-checking sites (examples link 1, link 2, link 3).

Antifake.am’s head is the oppositional political activist Narek Samsonyan, who also often spreads disinformation. In the propaganda film about Armenia produced by Russia Today, for example, Samsonyan was asserting an already debunked claim that Pashinyan’s family had bought houses in Canada and the US.

Samsonyan recently established a political party and joined a group of public figures and politicians to establish the “Election Monitoring Committee”.

“Babajanyan-Shirinyan alliance of democrats” is composed of two parties: “For the Republic” which is ruled by the member of the Parliament Arman Babajanyan, and the “Christian-Democratic Party” led by political scientist Levon Shirinyan.

* The initial version of the headline was the following: “Disinformation: the Babajanyan-Shirinyan alliance has not been registered to participate in the upcoming elections”. Afterwards, the headline has been edited and includes the exact quotation of antifake.am.