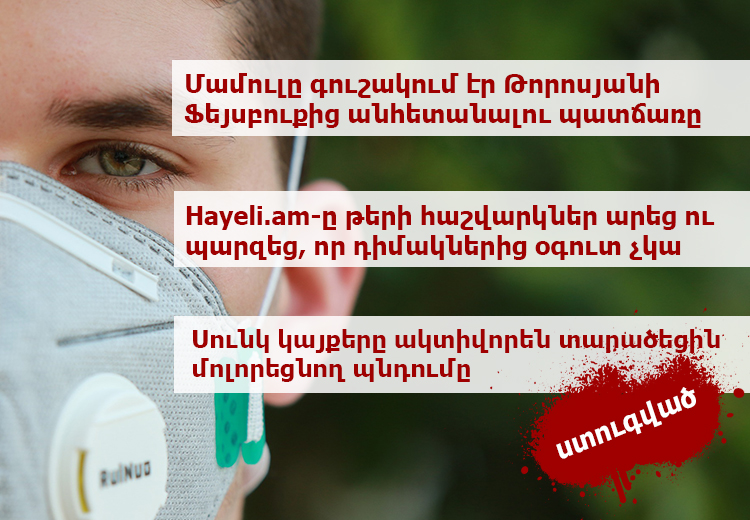 There was no shortage of CoronaMyths over the past two weeks․ ArmNews host Abraham Gasparyan kept repeating the phrase out of context about “vodka and tweezers,” the former director of Masis MC again urged not to wear a mask, and Marina Khachatryan demanded the death penalty for the minister whose Facebook profile was removed.

Media.am studied all the other theses and singled out the most common false or manipulative allegations about the coronavirus.

On August 24, it turned out that Arsen Torosyan had deactivated his personal and official Facebook pages. This disappearance of the minister from Facebook gave rise to various assumptions.

Politik.am, referring to anonymous sources, reported that Torosyan had an argument with the Prime Minister and was going to resign. This article was reprinted word for word by Yerevan.Today, Lurer.com, News.am, etc.

Politik.am also reported that Torosyan was called to the NSS. The source of information was again anonymous. At the same time, the former director of Masis MC Nune Nersisyan announced that her friend had seen Torosyan entering the NSS. Nersisyan, who often spreads conspiracy theories, put forward “another theory,” Torosyan knows too much, which does not help the government, and some money was laundered during the epidemic.

The topic was continued by the website Antifake.am, which presents itself as a platform for checking facts, but disseminated unreliable information. The website announced that the NSS “hacked” Torosyan’s Facebook page and found his correspondence criticizing the Prime Minister. Pashinyan got angry about all that, and Torosyan became inactive from Facebook. Like Politik.am, Antifake.am did not present any evidence other than citing anonymous sources.

Hayeli.am made incomplete calculations and found out that there is no use for masks

In August, the obligation to wear a mask was lifted for high-ranking officials speaking at events. Hayeli.am reported this information, emphasizing that the government removes the compulsion to wear masks for itself, and leaves it for ordinary people. However, the changes only concerned certain situations and not individual officials.

Columnist Ani Sahakyan also thought that masks were useless, substantiating her opinion with “simple arithmetic.” On May 25, when the masks became mandatory, 7,402 people were infected, and on August 28, 43,451.

This calculation is incomplete․ To make an assumption about the effectiveness of masks, it is necessary to compare not the two separate numbers, but the rate of spread of the infection during these months.

At the end of the article, the author made a rhetorical statement․ “Who was the one who said that there are 3 million Prime Ministers in Armenia? Long live the number one prime minister Nikol Pashinyan, so we can all not wear masks.”

The last phrase was taken out of context and became a misleading title․ “All RA citizens may no longer wear masks.” Following the example of Hayeli.am, the mushroom websites spread the article with the same misleading title.

The well-known host made false claims, and mushroom sites actively spread them

Narine Baghdasaryan, the former host of H2 TV, the founder of Sattva Yoga Studio, referred to the requirement to wear a mask in schools, stating that masks harm children and that children are being “forbidden” from breathing fresh air. Baghdasaryan also asked, “When the child takes off their mask, maybe the septum of the child’s nose is sloping or the child has a problem with their airways … what? … Will you give the child or teacher a fine? Or will you pass the burden to the principal…?”

Ofelia Kamavosyan, Deputy Head of the Public Relations and Information Department of the Ministry of Education and Science, commented on Baghdasaryan’s post, noting that it is not necessary to wear a mask for children with health problems. “In schools, it is clear that the police will not go around and give us a fine,” Kamavosyan added. She asked that the post be edited, taking into account what she had mentioned. Baghdasaryan, however, refused.

The post was shared 385 times on Facebook and liked 1,200 times. It was actively spread by mushroom websites and Facebook pages with the following title, “My child will not wear a mask, how can you be so ignorant that children are not allowed fresh air? Do you agree with the author?”

The topic of masks was also discussed on the air of Channel 5. The former head of the Arabkir district, Hovhannes Shahinyan, announced that children will exchange masks and will have a fungal disease. Shahinyan, who was a member of the Republican Party and the Rule of Law Party, was sure that the masks were worn for show, but if a free mask was put everywhere, he “as a citizen would be ashamed not to take it and put it on.”

Host Marianna Ghahramanyan predicted a hot autumn of public protests. And Hovhannes Shahinyan added that “this is already a struggle for existence” and asked the Prime Minister to prepare his resignation text.

Another guest of Channel 5, psychologist Karine Nalchajyan, stated that the masks cause health problems. This thesis has already been refuted․ Wearing a regular medical mask is harmless to health. Nalchajyan saw psychological problems in the society not only after the epidemic but in general after the revolution of 2018, which she called a “color revolution,” repeating the well-known thesis of Russian propaganda.

Another video about the alleged dangers of masks for children’s health was published by Facebook user Hasmik Mikayelyan. She shared a video about the harmfulness of masks, claiming that “the accumulation of carbon dioxide in them will lead to oxygen starvation, headaches, and eventually intoxication.” Her post was shared about 3,500 times.

These allegations are baseless. Medical masks’ material allows free access for oxygen molecules, therefore, oxygen starvation does not occur from wearing a conventional medical mask. As for carbon dioxide, its molecules are much smaller than oxygen molecules and also can easily come out of the mask.

The masks are designed to stop the virus, which is larger than oxygen or carbon dioxide molecules. By the way, when talking about the harmfulness of the mask, it is worth remembering that, for example, surgeons wore masks for several hours during surgery before the Covid-19 epidemic even existed. In other words, there is no evidence that an ordinary medical mask causes intoxication or oxygen starvation in a healthy person.