False And Refuted News Of January 1-15

In the first days of 2021, there was no shortage of scandalous false news and misinformation.

There were Iranians in the Yerevan supermarket, not Azerbaijanis

Narek Samsonyan, President of the Civic Consciousness NGO and founder of the antifake.am website, posted a picture on his Facebook page on January 15 and wrote that four Azerbaijanis were allegedly shopping at the Yerevan City supermarket on Komitas Avenue, accompanied by employees of the Armenian Ministry of Defense and RO. “Tomorrow you will enter your homes accompanied by the same people,” he wrote. The information was spread by a number of websites without verification.

Later, the Ministry of Defense of Armenia clarified that the photo being spread did not include Azerbaijanis, but representatives of the delegation of the Armed Forces of the Islamic Republic of Iran. They were in Armenia on a working visit, during which Military Police officers accompanied them.

There was no initial version of the contract, and the meeting took place

In early January, word spread that Prime Minister Nikol Pashinyan would go to Moscow and there would be new territorial concessions. The document to be signed in Moscow was allegedly secretly sent to the Ministry of Justice to bring it in line with the RA Constitution.

Minister Rustam Badasyan informed on Facebook that the ministry “has not received any contract within the framework of any procedure.” He expressed pain that “the practice of exerting psychological pressure on people with misinformation is not stopping.”

The trilateral meeting in Moscow took place on January 11. New territories were not conceded. The agenda of the meeting was of economic nature – the opening of regional communications. The issue of the return of the captives, considered “cornerstone and principled” for the Armenian side, was also not resolved at the meeting.

Pashinyan and Putin had a private conversation: the Коммерсантъ is wrong

The Russian website Коммерсантъ spread misinformation about the January 11 meeting. They wrote that immediately after the briefing following the trilateral meeting, Pashinyan went to the airport. Meanwhile, Aliyev stayed in the Kremlin and had a pre-planned private conversation with Putin. He had no reason to rush and “it seems that he is still using every opportunity to enjoy his victory once again,” the website wrote.

If the author of the article had opened the official website of the Russian president, kremlin.ru, he would have seen that after the meeting with Aliyev, Putin also had a private conversation with the RA Prime Minister. 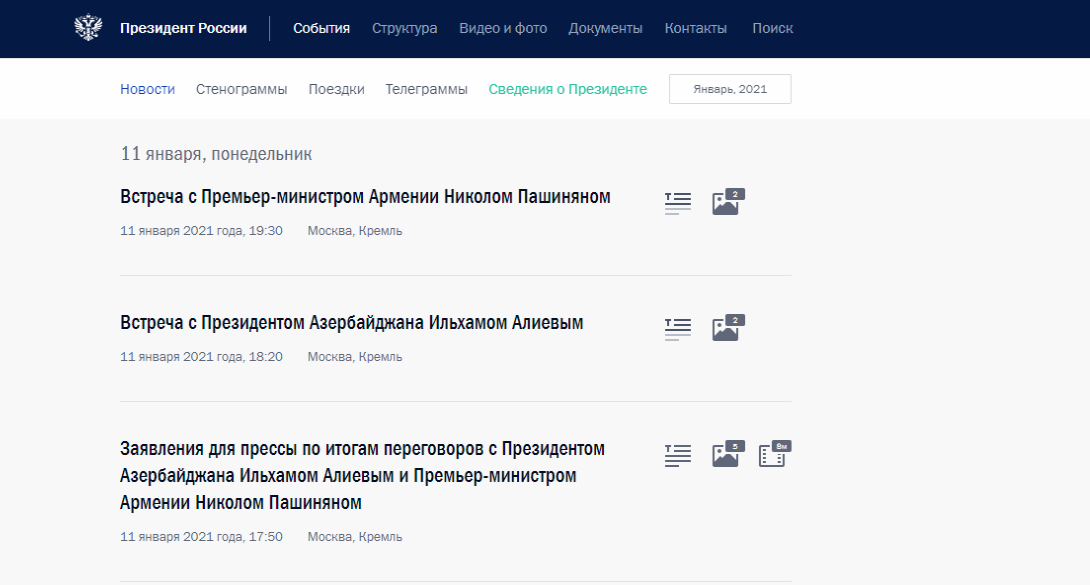 Which of the points in the November 9 statement were violated?

During the briefing following the trilateral meeting, first Vladimir Putin and then Ilham Aliyev mentioned that the norms of the trilateral statement signed on November 10, 2020 are being observed or are mostly observed, there were no serious incidents. Incidents, however, were reported: media.am summarized them.

For example, the first point of the announcement, the parties stop in their positions, was violated on December 12. An armed clash took place between the Armenian and Azerbaijani forces in two communities of the Hadrut region. These communities, in contrast to the map published by the Russian Ministry of Defense on December 13, were removed from the control zone of the Russian peacekeepers the next day.

Rita Sargsyan allegedly did not die

Vardan Ghukasyan, a former employee of the Armenian Police and now known for his live videos on Facebook, announced on January 13 that he had suspicions that the third president’s wife, Rita Sargsyan, had not died.

Sargsyan was infected with a new type of coronavirus, was taken to hospital in critical condition, and then abroad, but her life was not saved.

Ghukasyan says that he was interested and found out that none of the hospital staff had seen Rita Sargsyan as a patient. It is problematic for him to transfer the patient to Germany: According to him, the methods of treatment of the virus are the same everywhere. It is doubtful that the funeral was not covered, even the fact that the coffin of the deceased was closed. He attributes this death to the criminal case of trafficking children. The scandalous news was spread by mushroom websites, and the video gathered tens of thousands of views on Facebook.

This assertion without factual basis is a chapter from the conspiracy theory genre: There is no fact, there is an assumption, causal connections with weak justifications. For example, his suspicion about the closed coffin of the infected person is incomprehensible. This is an accepted procedure, a preventive measure, which is applied all over the world and in Armenia.

Another source of scandalous news with the same content was the post of a user named Jasmin Harutyunyan written with Latin letters. This was also spread by mushroom websites: press.am,  yn.am, maxinfo.am, lurer24.am, goodnews.am and others.

Suren Papikyan is the “coordinator” of the protests

The Telegram channel “Deja Vu” wrote on January 5, according to their source, that the protests against the Armenian Apostolic Church and especially His Holiness Garegin II are coordinated from the government building. “The Minister of Territorial Administration and Infrastructure Suren Papikyan has been appointed coordinator for this work,” the publication reads.

The “Civil Contract” party informed that the minister will file a lawsuit against “ALL the news outlets that reproduced the disgusting article” published on the Telegram channel.

Jhangiryan’s age and the legislation

168.am website wrote on January 12 that the authorities want to make former military prosecutor Gagik Jhangiryan chairman of the Supreme Judicial Council in violation of the law. The website talked to the incumbent chairman of the SJC, Ruben Vardazaryan, who pointed out the age limit for becoming a member of the SJC.

Fip.am found out that there is no violation of the law, as the age limit under the “Judicial Code” refers to the judicial members of the SJC and not to the lawyers-scholars elected by the National Assembly. The Supreme Judicial Council has 10 members, 5 of whom are judges and are elected by judges, and the other 5 are legal scholars and are elected by the National Assembly. The members of “My Step” want to nominate Jhangiryan as a lawyer-scientific member of SJC.

According to the scandalous misinformation, the Azerbaijani is filming Kapan

“Channel 5” TV channel stated in a report titled “The Azerbaijani Polad opened the door to Kapan” that Polad, an Azerbaijani national, entered the city of Kapan without hindrance and at the request of former Azerbaijani residents showed their houses.

The “Information Control Center” found out that the author of the video was not Polad Poladov from Azerbaijan, but Arthur, a resident of Kapan, an Armenian. The video was first published on June 8 on the author’s “Art VOYAGE ПУТЕШЕСТВИЕ” YouTube channel. The latter’s channel was created 2 years ago, where videos exclusively about Kapan were published.

Pashinyan-Popov statements contradict each other

On January 4, Nikol Pashinyan’s article entitled “The Origins of the 44-Day War” was published, where the Prime Minister referred to the Artsakh negotiation process, trying to explain the reason for the origin of the war. It was mentioned in it that the Russian proposals envisage the return of 7 territories to Azerbaijan, without touching upon the issue of the status of Nagorno Karabakh.

Days later, on January 13, the Russian Co-Chair of the OSCE Minsk Group Igor Popov referred to this statement, refuting the Prime Minister. “The allegations that Russia offered to return the seven regions” just like that and forget about the status “do not correspond to reality.”

Later, RA Foreign Minister Ara Ayvazyan responded to Popov, “I unequivocally agree with Mr. Popov that the status of Artsakh was the most important principle for the settlement of the conflict, and I will add that it has been and remains so today.”

Media.am examined the published documents and statements and concluded that the realization of Nagorno Karabakh’s right to self-determination was not really left out of the package of Russian proposals, however, the status issue was left to an uncertain future.

The confusion of gender-forbidden terminology

On January 8, Tert.am and a number of local websites reported that the words “man,” “woman,” “mother,” “son” and “daughter” would become obsolete. The US House Rules Committee intends to introduce new House Rules aimed at creating a gender-neutral environment and ensuring respect for all gender identities.

Referring to The Washington Times, they clarified that if the norms are approved, only the pronouns and words describing family and friendships, which ensure gender neutrality, will be circulated.

The widely circulated Snopes platform reported that Democrats were proposing to replace gender identifying terms in the House Rules of Procedure with gender-neutral alternatives. In other words, we are talking only about this one document, and this will not prevent the members of the House from using words emphasizing gender when speaking or when drafting bills.

❌ Haykak Arshamyan, director of the Hayastan All-Armenian Fund, called the letter spread on behalf of the fund’s board of trustees false. In it, the council allegedly demanded that the fund’s management submit a report for 2020 about the expenditure of the money raised. In the event of a failure, the Board of Trustees will allegedly contact the US Internal Revenue Service and the Department of Justice.

❌ The Tavush regional administration denied the rumors that several villages in the region and a section of the road are under the control of Azerbaijan.

❌ The Ministry of Defense of the Republic of Armenia characterized the information spread from one of the Telegram channels that the Azerbaijani side had seized an Armenian soldier from the border checkpoint of Davit Bek community of Syunik region as misinformation.

❌ Mane Gevorgyan, the Prime Minister’s spokesperson, denied the news about the dismissal of the Minister of Health Arsen Torosyan. She informed, “We have not received such an application in the government.” However, he eventually resigned and will be the Chief of Staff of the Prime Minister from now on.