False And Denied News Between September 1-15

The school year started on September 15. During the previous two weeks, the press spread the most pervasive lies about schools and children: fake sex education textbooks, fabricated transgender people, distorted American laws, and so on.

The resumption of schools was an occasion for spreading manipulative news about the new general education standards. Thus, sexologist Narine Nersisyan announced that due to the new standards there will be “an increase in the number of homosexuals.”

Nersisyan often makes false or manipulative allegations about sexuality. In a film about the Lanzarote Convention, funded by the former head of the National Security Service Arthur Vanetsyan Foundation, Nersisyan said that it was too early to teach children under 12 to protect themselves from sexual violence. Fip.am mentions that in 2014 Nersisyan had the exact opposite opinion, announcing that sex education starts “from the day of birth.”

Moreover, homosexuals are now the main target of Nersisyan’s statements, but in 2014 she spoke about the problems of Armenia’s “homophobic society.” 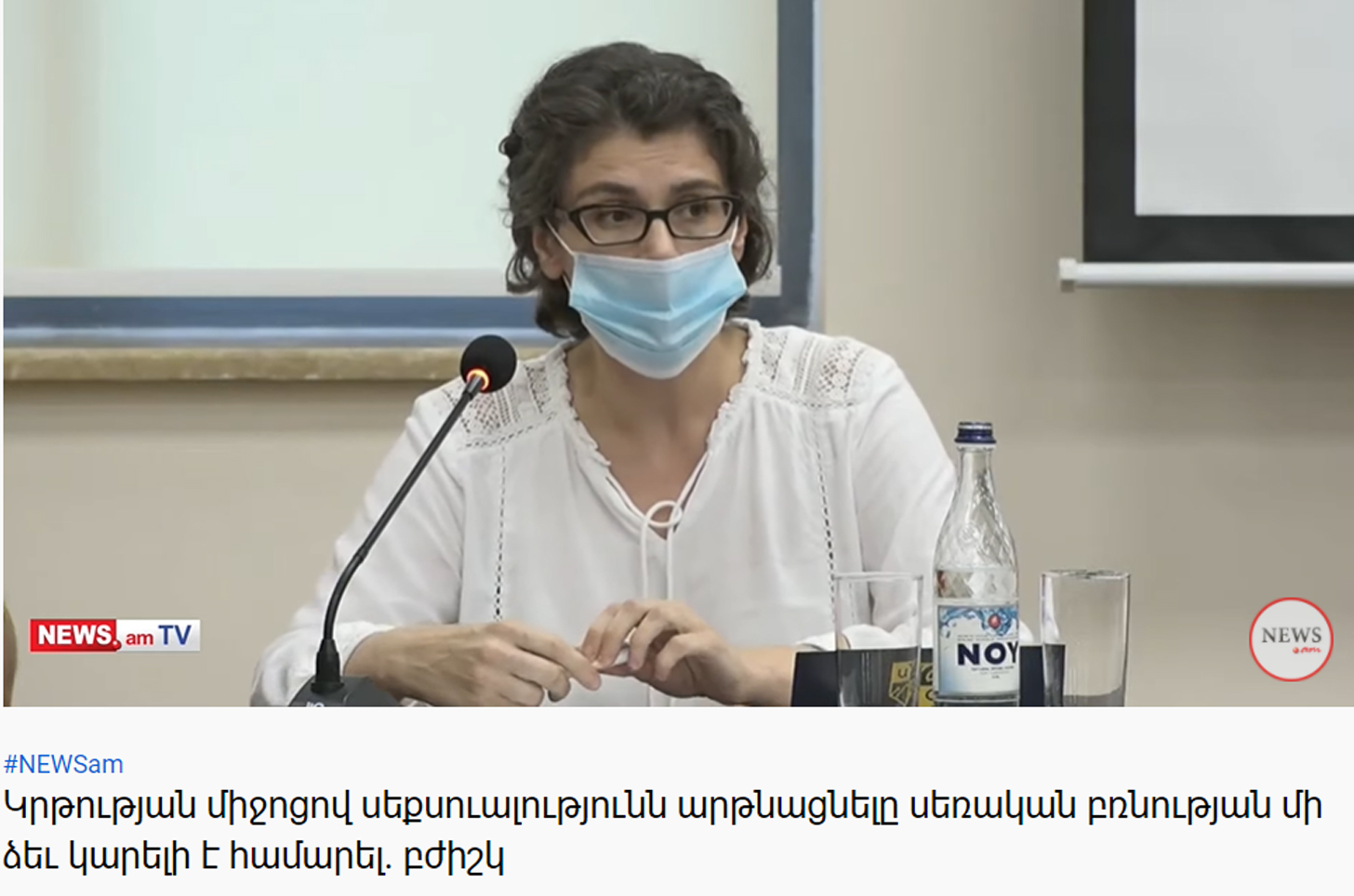 Thus, the misleading claims about the standards did not end. Aida Topuzyan, the head of the pedagogical chair of the Pedagogical University, stated during the discussion initiated by the “National Agenda” party that children should not know about the equal rights of men and women. Topuzyan discovered “very hidden” principles of the Istanbul-Lanzarote conventions in the new educational standards.

She also stated that children should be presented with the data of the female reproductive cycle in the form of a graph in mathematics classes. Topuzyan’s claims were spread by times.am, panorama.am, aravot.am, news.am, etc.

Deputy Minister of Education and Science Zhanna Andreasyan called the statements made during this discussion a “parade of misinformation.”

Websites shared an old photo and news unrelated to Armenia

The press and Facebook users found transgender people among the Diaspora Armenian specialists who arrived in Sarigyugh through the program “IGORTS.” The photo of Canadian musician DJ Jesse Osborne Lanthier, who visited Sarigyugh in 2019, was spread with sensational headlines.

Another false textbook on sexuality was spread. The Facebook account supporting Robert Kocharyan published pictures of a 1999 booklet and announced that it was an elementary school book. The big news outlets – “168 Zham“, 7or.am, mamul.am, lurer.com, spread the information without checking. Soon, however, the author of the book was found and they said that it had nothing to do with elementary classes and that it was intended for a professional seminar.

This is not the first time that a casual book has been presented as a textbook on “sex education.”

The topic was not limited to this. The websites posted a video about how a teacher “masturbates during the lesson.” The article with the sensational title appeared on blognews.am, as well as on other websites. Neither in the title nor in the text did the author mention that the case had anything to do with Armenian schools. The incident took place in Russia.

Danielyan’s assertion echoes the false rumors spread in the American extreme conservative circles about the new law passed in California.

During the conversation, Kocharyan made some remarkable statements. For example, he thought that the society in Armenia was divided “on the basis of intellect”; he urged Russia to use soft power against Armenia better.

This assertion, like other similar statements about Open Society Foundations, is misleading. The George Soros Foundation has been operating in Armenia since 1997. The list of grants provided by the foundation is open; it can be seen that in just one year of Kocharyan’s presidency, the foundation has provided grants of hundreds of thousands of dollars in Armenia.

❌ On September 1, the Chief of Staff of the Prime Minister Eduard Aghajanyan denied the information spread by “Pastinfo” that “hundreds of millions of abuses were found in the renovation of government-private houses.” Aghajanyan mentioned that the amount has been inflated dozens of times. He also stated that the information that NA deputy Hrachya Hakobyan actively participated in the election of the contractor company did not correspond to reality.

Abuses have really been found, and according to Aghajanyan, he himself applied to law enforcement.

❌ The press secretary of Yerevan Municipality Hakob Karapetyan denied the rumors that a skyscraper will be built in Victory Park to replace cut down trees. According to him, no trees have been cut down in the park, and there are no plans to build a skyscraper.