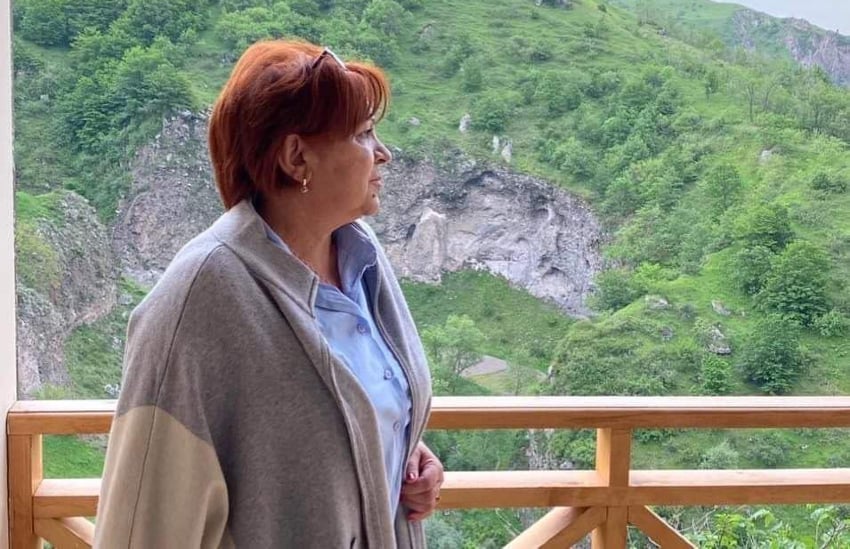 During the war, Goris was a crossroads connecting Yerevan and Stepanakert, including for the international media. Now not only Goris, but also the whole of Syunik is a big crossroads, where roads, borders and opposite interests intersect.

This controversial and tense region is of strategic importance, but it is covered with uncertainty. This is evident in the media coverage.

It is not clear what political decisions will be made and what impact they will have on the lives of the residents tomorrow, a month later, a year later.

Journalist Susanna Shahnazaryan, President of the Goris Press Club, describes this situation as apprehensive. And she says that in Syunik, which has become a border and has received refugees, the primary issue is the security of life.

But at the same time, it is necessary to write down the life stories of the people of Artsakh and Syunik and document them.

There is a big difference between the news materials prepared during the war and after the war. It seems that it is time to speak more freely and realistically about Syunik, although it is a region with a complex political influence. Why is there so little material about Syunik now?

During the war, almost all the media outlets were here in Goris, at least because they were on their way to Stepanakert. And when it became very dangerous in Stepanakert, the information center was moved here as well, and from here the officials also communicated with international journalists.

It’s just that at that time everyone was constantly in pathos, saying that we would win. And in a way, that triumphant and enthusiastic mood prevented the journalists from writing about things closer to reality. Many tended to write only about success.

But then, of course, the reality came to life and also affected the media field. That general mood of despair continues even now. At times, it seems that people like to talk about misfortunes and failures all the time.

In fact, for me, as a citizen of Goris, it is important that this hopeless style, the desperate tone, changes. To have more constructive journalistic materials. There is a great need for them because there is no other way to overcome desperate thoughts and real challenges.

If the media is to present reality to people, then part of that reality is that life must continue. And we need to talk about it.

Of course, it is difficult. For example, I am at a loss when I hear about the condition of mourning, wounded young people, parents of killed soldiers. I also have relatives who are no longer with us, I also know a large number of refugees in Goris. But even in this situation, I think we need to open a small stream that will give a little hope in this sea of sorrow.

There is uncertainty in the upper echelons of power, and it extends to everyone. How do journalists work with the regional authorities these days to provide the necessary information for the lives of residents?

It seems to me that now everyone is in a state of expectation, which is also difficult for journalists. For example, you can prepare a piece of material and suddenly it will turn out that a completely different decision has been made and the situation has changed. Journalists like everyone are waiting for clarity. And the resulting information vacuum is filled with random, up-to-date material.

After the war, one of the most abrupt situations began in our region: The local authorities expressed a lack of confidence in the state authorities. And on the other hand, it turned out that the regional administration did not entirely agree with that step. As a result, there were double concerns. And it is difficult for journalists to remain impartial not only to two but also to a third party, the public.

But of course, the biggest problem is the safety of lives.

The settlements, the parks, the people are very close to the Armenian-Azerbaijani border, and few will risk living like this. Loss of premises or lack of security also means a change in living conditions.

Goris is probably more crucial than Yerevan. Why does it not become the main target of the government?

Initially, the government’s indifference was understandable, it seemed that there were more important issues, but in the new situation, the issue of Goris and its settlements is urgent and should be included among the priorities.

Even if journalists are ready to make reassuring materials, as a rule, they are not aware of the decisions made in Yerevan and how the regional and community authorities will react to those decisions.

It was also due to the lack of information after the ceasefire that people in Syunik were shocked. They hid in every way, for example, the fact that some residents of Shurnukh village had to leave their homes. Furthermore, they considered the concerns inappropriate.

Honest and timely information might not have been so morbidly if it were not for the authorities’ efforts to hide the reality.

People in the authorities said in very sparse interviews that the Azerbaijanis would not appear in the territory of Armenia, but people saw something else. For example, one day they suddenly saw an enemy soldier on their commonly frequented roads.

Nobody informs the inhabitants of the border villages how they will continue their life, will they be able to cultivate their property, the land, gather the harvest, plan the future? Who will take care of the safety of the farmer working in fields near the border? Do we rely on the idea of a neighborhood that has not endured any kind of ordeal?

The security map depends on the sky. And no one talks to those people.

In the Tegh community, for example, there are several villages just a few hundred meters from the enemy border. Azerbaijani positions can be seen from the balconies of Nerkin Khndzoresk houses. And the stories about those people must be written, their problems must be revealed.

At least those people should be able to speak through the media and ask the authorities what do you think about our security?

If the authorities have something to say, then, of course, they must make good use of the media.

To put it bluntly, should people build a house or, in the end, put an x over what already exists?

Although fortunately, I have not seen that people in our region are willing to leave the homeland, quite the opposite, they feel responsible.

But in any case, the indifference puts a lot of pressure.

Now, in my opinion, a serious chasm has been created between Syunik and the national authorities. And the reason is not that the community leaders expressed no confidence in the government and demanded the resignation of the Prime Minister, but that the people of Syunik see that no one cares and speaks about them.

It is also not clear how the civil protection of the residents will be solved, how many shelters will be built, with which organizations will a security strategy be worked out? How will they inform people in case of an alarm? What media will be used to do so?

How is that done now?

During the war, several online notifications were sent, but this is not enough, as not everyone sleeps with their phone under their pillow and may not hear the signal.

The next urgent issue after Artsakh is in Syunik. And here we need an emergency structure because the problems are also urgent.

It turned out that even in the days of the war, the local self-governments were busy holding the border, feeding the refugees, and so on.

And the Ministry of Labor and Social Security has so far left the problems of refugees to the community authorities or other structures (of course, there is a government decision to provide assistance to the displaced, but it is not enough). As a result, it may turn out that all refugees are offered beds, while they need mattresses. Or everyone is given flour, but in reality, there is no need for flour.

This is a matter of coordination.

For example, now only in the community of Tegh, there are 150 families from Artsakh, and in a school with 300 students in Goris, there are more than 40 refugee children. Of course, the people of Goris show exceptional care for them, but the community authorities still take care of their needs, and there is no centralized state system.

Our hearts are also bursting now, wondering how we can do useful work, how to include the refugees in our lives.

I remember that years ago when I was writing the stories of people who came to Armenia from Azerbaijan, many people said that we remained strangers in Armenia … They felt that they were strangers to their own people.

The people of Artsakh should not say the same.

The feeling of that inner alienation is very painful, of course. And it will leave a mark.

But concerns about life safety do not leave room for more fragile issues. Now the primary question is whether we will continue to live safely in Syunik or not.

A new security strategy must be developed. But who will do it, when?

It seems to me that beyond the borders of Syunik the concerns about the situation in Syunik are limited only to pathetic speeches.

Sometimes I tell my friends with humor to get an exit visa in passports if they are coming to Syunik. It’s still a joke …

But there really is an impression that our problems are ours alone.