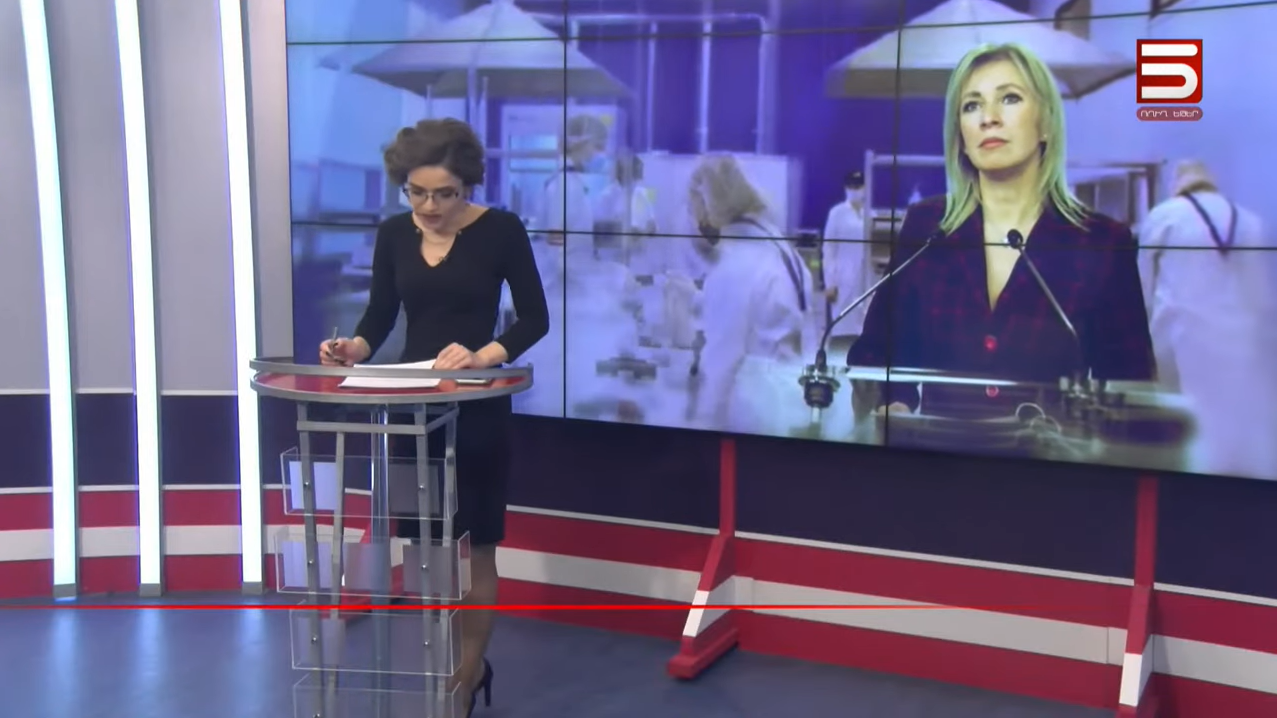 Channel 5 repeated the Russian propaganda narrative without checking, tying the information attack against Ukraine and the West with Armenia.

On March 9, during the broadcast of “Haylur” of the Armenian Channel 5, the statements of mostly Russian state sources about the Russian-Ukrainian war were broadcast, without presenting counterbalanced facts. Channel 5 also connected one of these assertions to Armenia.

“Official Moscow demands that the Pentagon put all the playing cards on the table and say clearly what it was going to create in 30 Ukrainian laboratories, for the opening of which it invested $200 million,” said host Lara Arakelyan, quoting the Russian Foreign Ministry, “The federation has all the evidence: The West was launching a biological attack on the whole world.”

The host also added that Russia has initiated a criminal case “with the evidence it has” and “according to Armenian experts, the chain of investigation may even bring the Russians to Armenia.”

According to Armenian experts, Channel 5 most probably meant activist Hayk Ayvazyan, whose words are quoted in the “Haylur” report. Hayk Ayvazyan, however, is not an expert in the field. He is a member of far-right political groups, whose assertions have been repeatedly covered by fact-checking journalists (example 1, example 2).

Ayvazyan, like a number of other pro-Russian activists, has stated that “biolaboratories” are dangerous, not controlled by the Armenian government and that biological weapons could be developed there (example 1,  example 2).

The labs are not American

The so-called “biolaboratories” operating in Armenia are the branches of the National Center for Disease Control and Prevention and are called “Reference Laboratory Center.” It was funded and repaired by the US Department of Defense’s Defense Hazard Reduction Agency, but operates under the auspices of the Ministry of Health and is therefore under the control of the Government of the Republic of Armenia.

By the way, although “Haylur” reports about the visit of Russian specialists, it is contradicted by the words of the same political activist Hayk Ayvazyan that civilian experts may not have understood that military experiments were being carried out there. Channel 5 does not detail the basis of Ayvazyan’s assertion-assumption that the Russian Federation may not have sent qualified specialists to Armenia.

The laboratories were also funded by Russia

The “Reference Laboratory Center” also received support from the Russian government. Under the agreement on financial and technical assistance within the EEU, Armenia received 14 different types of equipment, furniture, and two equipped mobile laboratories from the Russian Federation.

Russian state news agency Sputnik Armenia also reported on the activities of laboratories and funding from Russia in 2017. Sputnik’s correspondents personally visited the laboratory and talked to the director.

The conspiracy theories about “biolaboratories” are old

The story on the “biolaboratories” is not new. For years, Russian state sources have claimed that the United States has set up special laboratories in several post-Soviet countries to develop biological weapons with the help of US special services.

Since the beginning of the new Russian-Ukrainian war, Russian politicians have started spreading this story again.

For example, the leader of the Communist Party Gennady Zyuganov claimed that there are 15 “biolaboratories” in Ukraine, and there are several more in Georgia and Kazakhstan.