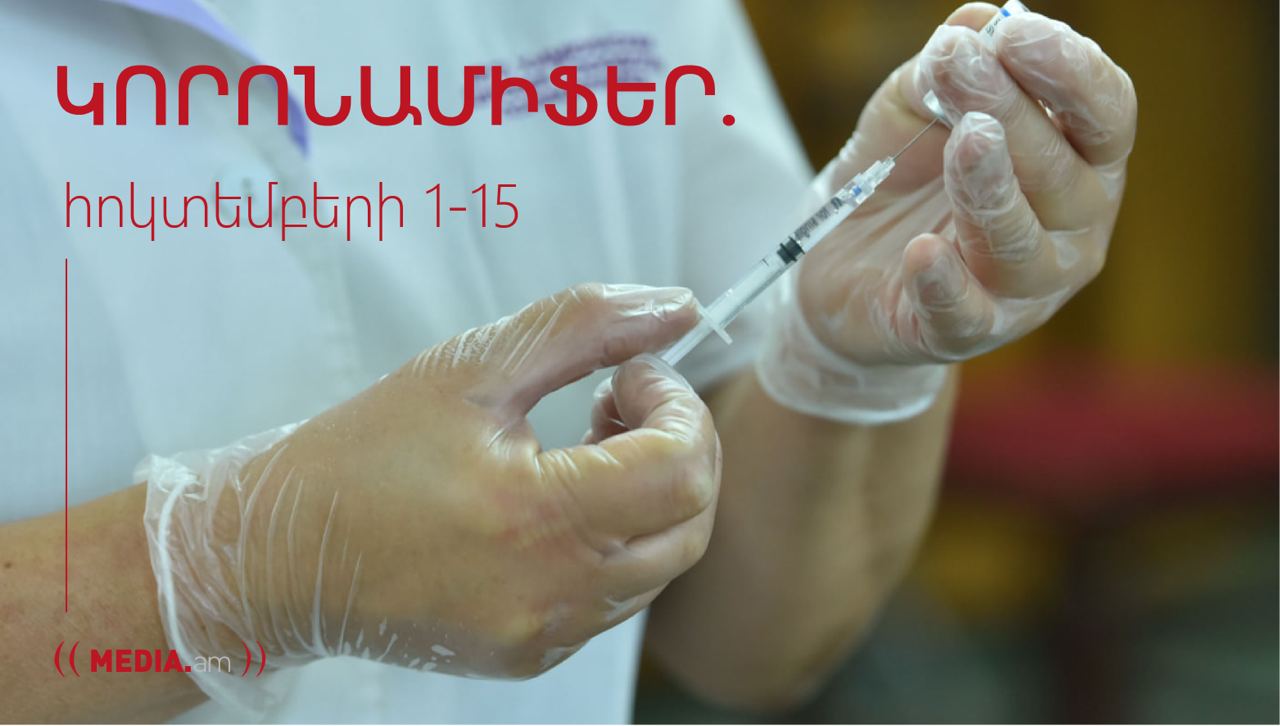 In the first half of October, myths about vaccines and coronavirus continued to flood the press and social media. Political activists claimed that people had died from the vaccine, doctors with anti-vaccine stances presented scientific data incompletely, and Facebook users spread the Turkish politician’s claim that after vaccines, children with tails were born.

The participants of the rally against “compulsory vaccinations” made false claims

On October 7, the rally of the anti-vaccine “Free Will” initiative took place in Yerevan. This initiative was founded by the leader of the “Zartonk” party, lawyer Ara Zohrabyan, who, during its foundation, manipulated information related to vaccinations.

Speaking to reporters, Zohrabyan assured that his initiative is not against vaccinations, only against them being mandatory. However, the speeches of the participants of the rally said something else. For example, Dmitri Harutyunyan, who studied at the Medical University but left the field of medicine, urged the audience “Don’t you dare get vaccinated, you will be taken to the slaughter.” He also claimed that people in Armenia died as a result of vaccinations.

Dmitri Harutyunyan combined these alarming calls with false claims. For example, he said that masks cause oxygen deficiency (which is a common misconception) and that the Spanish flu was not contagious (also wrong). As for the connection between vaccinations and deaths, the RA Ministry of Health stated that no deaths related to vaccination have been registered in Armenia.

Although Harutyunyan did not mention the source of his allegations, one of Armenia’s major news outlets, Aravot, repeated them without checking.

The risks of getting sick are not taken into account

Another member of the “Free Will” initiative is doctor, sexologist Samvel Grigoryan.

Grigoryan headed the AIDS Prevention Center for many years. In 2020, Grigoryan was fired by the Minister of Health because he refused to comply with the ministry’s orders to merge the AIDS Center and the Nork Hospital. After his release, Grigoryan sharply criticized the ministry, including the issue of the immunization of the population.

This statement is incomplete: According to the US Centers for Disease Control and Prevention (CDC), vaccinated people are less likely to become infected. This implies that they are also less likely to pass on the infection because if a person is not sick, they cannot transmit the virus.

? “Immunity formed as a result of the disease is much more stable and long-lasting,” and a study conducted in Israel shows that vaccinated people are 13 times more likely to be infected than those who get sick and recover. Therefore, why should people who have recovered be vaccinated?

This assertion about natural immunity is also problematic. A person must be infected in order to acquire natural immunity, but being infected can lead to serious illness, hospitalization, and death. Vaccines prevent severe disease and death.

As for the vaccination of recovered people, there are countries where recovered people receive only one dose of the vaccine because they already have certain immunity. However, there is still relatively little research on this topic, and so far most countries have provided the usual two doses to people who have recovered. By the way, the research cited by Grigoryan has not yet passed peer review, i.e. it has not been checked by other scientists. Its publisher warns that it “It reports new medical research that has yet to be evaluated and so should not be used to guide clinical practice.”

No children were born with tails after vaccination

The post was accompanied by relevant images with the logo of the Turkish Beyaz TV company.

The man pictured in the post is Turkish conservative politician Fatih Erbakan. His statement about children with tails was widely spread in the Turkish press and even became the subject of ridicule by one of the country’s famous comedians.

Erbakan’s claims are false. First of all, there is no scientific data on children born with extra limbs and a tail after the mothers receive a Moderna or Pfizer vaccine as claimed in the Facebook post. Besides, one can be convinced that the claims of the politician are false by studying the pictures of the “genetically modified” children he showed. For example, the image of a child with a tail is the work of Larry Dunston. This is not a real photo, but an edited image. 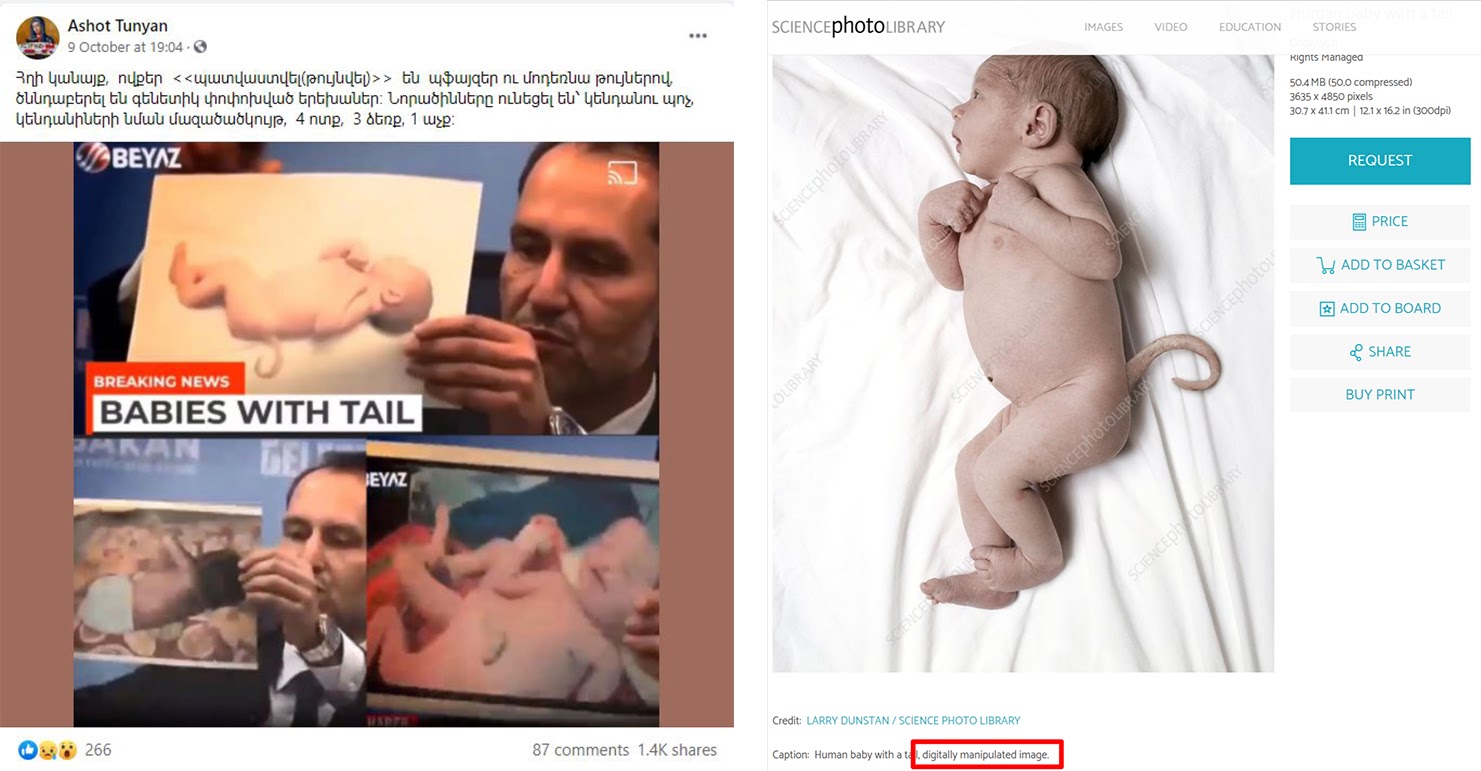 This image has been circulating on the Internet since at least 2015, long before the creation of the Moderna and Pfizer vaccines.

The “creator” of mRNA technology is not a reliable source: he spreads misinformation about vaccines

On October 7, MedMedia.am published the words of Samvel Grigoryan, former director of the AIDS Prevention Center, that “mass vaccinations should be stopped.” Grigoryan was referring to the American researcher Robert Malone. MedMedia.am website added that according to Malone, vaccinations worsen the course of the disease.

Malone introduces himself as the creator of mRNA technology. Moderna and Pfizer vaccines work with this technology. Malone opposes these vaccines, claiming that they harm the body. Malone has recently become popular in the United States, his words are often covered by more conservative or anti-vaccine media platforms.

Although Malone presents himself as the creator of mRNA technology, this technology has been studied by many scientists for many years, and it does not have a single creator. Moreover, Malone did not participate in the development of Moderna and Pfizer vaccines based on this technology. Fact-checking journalists found many false and manipulative claims in Malone’s speeches (example 1, example 2).

The Armenian website MedMedia.am also often spreads misinformation about vaccines. It was founded by urologist Gevorg Grigoryan. He is not only a doctor but also a politician․ He was included in the pre-election list of the opposition “I have honor” bloc during the snap elections to the National Assembly.

In 2020, the international press covered MedMedia.am: openDemocracy and The Guardian reported that Grigoryan had received a grant from the US Embassy to create the website, and that, in fact, the website that disseminated misinformation about Covid-19 in Armenia was funded by American taxpayers.

Pregnant women can be vaccinated

Unlike vaccination, coronavirus disease can be extremely dangerous for pregnant women. Dmitri Harutyunyan assured his followers that pregnant women experience the disease lightly, but forgot to mention that scientific data and experience prove the opposite. Several pregnant women have already died from coronavirus in Armenia. The last case was registered on October 13, when a 30-year-old woman died of coronavirus.

At the same time, the director of the Scientific Research Center for Maternal and Child Health Georgy Okoev said that in Armenia “we had a case when a vaccinated woman became pregnant, a normal process and childbirth was registered.”

On October 7, lawyer, MP from the “Armenia” faction of the National Assembly Aram Vardevanyan wrote on his Facebook page that “There is no European country where vaccination is COMPULSORY.” This statement was incorrect. His words were checked by website Fip.am, which brought examples of a number of European countries (Italy, Greece, France), where vaccinations are mandatory.

On October 11, Vardevanyan contradicted Fip.am in a conversation with journalists, claiming that the website was wrong. “They say that either you are vaccinated or you present a test result. So, this does not mean that it was obligatory.”

Media.am fact-checked Vardevanyan’s statement, showing that his assertion was manipulative. By this logic, vaccinations are not obligatory in Armenia either, as you can either take a test every 14 days or be vaccinated.

Media.am also covered Vardevanyan’s assertion about the tests being free in Europe. That claim is outdated. Although the tests were free, in the autumn they also became paid in EU countries to promote free vaccination among the population.

Anahit Avanesyan did not resign

On October 12, the mushroom website arm2news.info spread the news that the Minister of Health Anahit Avanesyan is resigning. This post was liked more than 1,400 times on Facebook, shared 140 times.

The article, however, did not contain the information promised by the title. Instead, the mushroom website wrote about Nikol Pashinyan’s angry speech about vaccinations during the October 7 government session. Then added, “Rumors are circulating” that the minister “wanted” to resign.

There is no other report in the press or official sources about Anahit Avanesyan’s alleged resignation. She continues to hold office.