False And Refuted News Of January 15-31 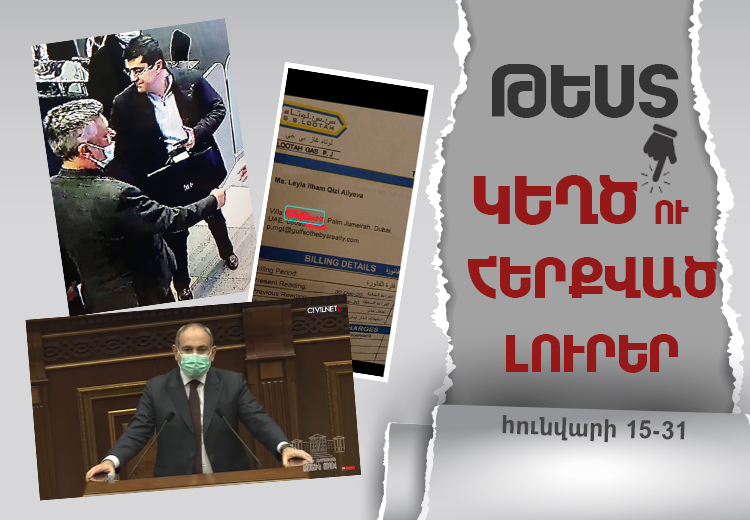 In the second half of January, there was a lot of misinformation in the press again. Take the test and check if you can single out the fake news. Read more about fake and manipulative news below.

The Telegram channel Mediaport spread information that the Aliyevs’ real estate in Dubai was transferred to Anna Hakobyan. As evidence, the channel presented a document, which allegedly “shows that Anna Hakobyan was given a […] real estate package belonging to the Aliyev family.”

This document, however, was a gas receipt from a large Arab company Lootah Gas. Lootah Gas also supplies gas to Dubai, and its receipt did not in any way prove the transfer of ownership.

Although the “proof” was an ordinary gas receipt, the news was widely spread in the press․ It was reprinted by politik.am, lurer.com, yerkirmedia.am and others. Hayeli.am titled the news “A Sensational document.”

Later, Fip.am published an investigation into the Mediaport Telegram channel that spread this information. According to it, the channel was founded by Narek Malyan, an extreme right-wing activist, former adviser to former Chief of Police Vladimir Gasparyan.

The message was spread along with a photo of Harutyunyan, from which it could be assumed that the president was at the airport.

This photo was old: It has been available on the Internet since at least November 2020.

Citing the Mediaport channel, the information was spread by 168.am, pastinfo.am, lurer.com and other websites.

Incorrect information about the AstraZeneca vaccine

Armenia is waiting for the first batch of the British AstraZeneca vaccine. The vaccine has not arrived yet, but incorrect information about it has already been spread in the Armenian media.

? RPA Vice President Armen Ashotyan claimed on his Facebook page that AstraZeneca is 60% effective. Ashotyan provided incomplete information. The fact is that AstraZeneca has been tested in two different ways:

Thus, Armen Ashotyan’s assertion that AstraZeneca is 60% effective is not accurate.

? Hetq.am published an article entitled “AstraZeneca will make up 1/3 of the vaccines in Armenia, of which 6 people died, and the efficiency is 70%.” The connection between the vaccine and the mentioned deaths has not been confirmed, Hetq.am changed the title of the article after Media.am’s reference and left a note about it in the article.

Also, read the article on Media.am, where we have gathered some important information about AstraZeneca.

Pashinyan’s statement about the repatriated prisoners was incorrect

During a question-and-answer session in the National Assembly on January 20, Prime Minister Nikol Pashinyan stated, “Now the number of prisoners is large, but if we look by that logic, during that whole period more prisoners have never been returned to Armenia than were returned after November 9.”

Media.am checked this statement and found out that Pashinyan’s statement about the number of repatriated prisoners does not correspond to reality.

The largest number of captives returned after the first Artsakh war:  In one message of the Red Cross, as of 1996, 109 prisoners were announced to return to the Armenian side. In addition, according to the data collected by media.am in 1995-1997, 61 people were repatriated. Meanwhile, in 2020, fewer than 54 people returned to Armenia from November 9 until the day of Pashinyan’s mentioned statement.

Ararat Mirzoyan was described as a Turkish agent

Mikayel Minasyan, former ambassador of the Republic of Armenia to the Vatican, son-in-law of the second president Serzh Sargsyan, announced that NA Speaker Ararat Mirzoyan is a double agent. According to Minasyan, Mirzoyan was first recruited by the Turkish special services, then by the Armenian one.

Soon Mikael Minasyan also published a handwritten document that had to prove his claims. However, there was no information in the document about Mirzoyan being a Turkish agent.

Instead, the document, as it was presented, was the letter signed by Mirzoyan on cooperating with the NSS of Armenia. The NSS denied this information.

Why were Muslim Magomayev’s performances heard on the subway?

The head of the “National Press Club” NGO Narine Mkrtchyan complained on Facebook that the Yerevan metro had included Russian songs in the stations, some of them performed by Azerbaijani singer Muslim Magomayev. She also added that Russian announcements appeared in the metro. “Being foreign-friendly is not only not honorable, but it is not safe,” Mkrtchyan concluded.

This post was reproduced by kentron.am, asekose.am, as well as other mushroom websites.

On January 22, songs performed by Muslim Magomayev were really played in the Yerevan metro. The reason, however, was not to be “foreign-friendly,” but the 100th anniversary of composer Arno Babajanyan. Magomaev is the performer of a number of Babajanyan’s famous songs, the two artists have collaborated for a long time.

Responding to Mkrtchyan’s post, the metro also said that the announcements made at the metro stations are bilingual, in Armenian and English.

At the end of January, Andranik Hovhannisyan, a former expert at the Orbeli State Analytical and Research Center, announced on 168.am that Azerbaijanis living in Kazakhstan had handed him Prime Minister Nikol Pashinyan’s diplomatic passport.

Hovhannisyan is a citizen of Kazakhstan. His entry to Armenia was banned in 2019. According to the National Security Service, the reason for the ban is Hovhannisyan’s threat to the state security or public order of the Republic of Armenia.

Hovhannisyan’s announcement about the Prime Minister’s diplomatic passport was spread by news.am, lurer.com, yn.am and other news outlets.

After the news of the ceasefire agreement between Armenia, Azerbaijan and Russia became known, demonstrations started in Yerevan, during which a group of people broke into the government building.

The Twitter user with the nickname “L3v0n” also noticed that Pashinyan’s picture was glued on the paper and not printed on the published passport. This was done on the old passports of the RA passports․ In new passports (the passport published by Hovhannisyan is new) the picture is printed on paper. This fact suggests that the passport presented by Hovhannisyan on 168.am may be fake.

The expenses managed by the “1000 AMD” fund are not new

Mesrop Manukyan, a former member of the board of the Servicemen Insurance Fund, wrote on his Facebook page that administrative expenses appeared in the fund, which never happened. “‘The backpackers’ have figured out how ‘to steal 600 million AMD’ from the families of the killed servicemen,” Manukyan wrote.

This assertion is manipulative. The Servicemen’s Insurance Fund did not have any administrative expenses, as according to the Law on Compensation for Damages Caused to the Life or Health of Servicemen during the Defense of the Republic of Armenia (Article 31), the activities of the Fund were provided by Central Bank employees on a voluntary basis (unpaid). The foundation’s office was also located in the Central Bank.

This assistance of the Central Bank is defined by law for five years, after which the fund must cover its administrative expenses. The director of the fund Varuzhan Avetikyan mentions that it will take place starting 2022.

The court ruled that an apology and denial should be published on the speaker’s Facebook page on behalf of Pashinyan. According to the decision, the Khachatryans’ court costs must also be reimbursed.

? On January 29, the Artsakh Defense Army denied the information that 15 Armenian servicemen had been taken prisoner. The Ministry of Defense called on the citizens “to be a little more responsible for their own words.”

? Former My Step and now independent MP Taguhi Tovmasyan asked a question to candidate Davit Khachatryan during the NA hearings dedicated to the election of a member of the Supreme Judicial Council and mentioned that the latter worked in the Open Society Foundation. According to this fact by Tovmasyan “the Corruption Commission has registered a certain trace that has a negative impact on your rating.”

“My Step” MP Suren Grigoryan also responded to Tovmasyan’s statement, saying that he got acquainted with the conclusion of morality and there was no such assessment. He also mentioned that the deputies do not have the right to publish the content of the moral conclusion.