False And Manipulative News In The Region About Armenia: November 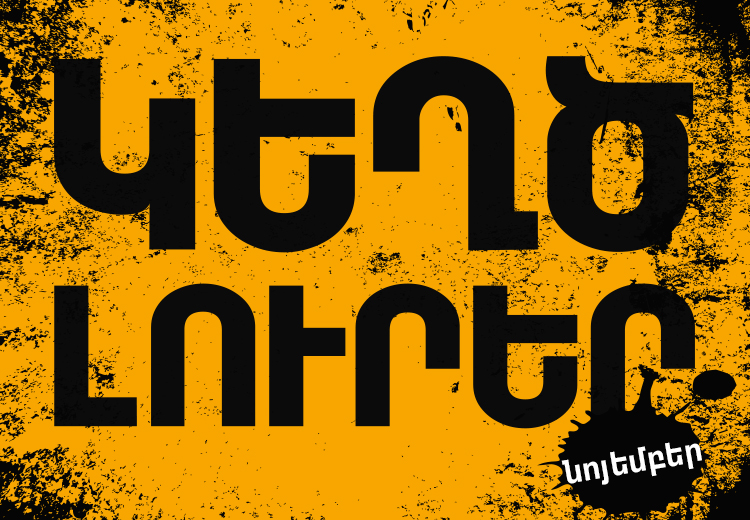 The end of the second Artsakh war, the defeat of the Armenian side, and the subsequent wave of protests in the region became the cause of misinformation and conspiracy theories in November. They mainly came from Azerbaijani-Russian sources.

According to Margarita Simonyan, the Russian proposal has been discussed with the US for a long time, and from now on the flag of Artsakh will be with the Russian tricolors.

Russia Today and Россия сегодня editor-in-chief Margarita Simonyan made a post about Artsakh last month and spoke on TV.

? On November 13, Simonyan posted the flag of Artsakh in Russian tricolors on social networks. She insisted that it is being spread across the Armenian domain of social networks in the sense of “Karabakh is Russia.” 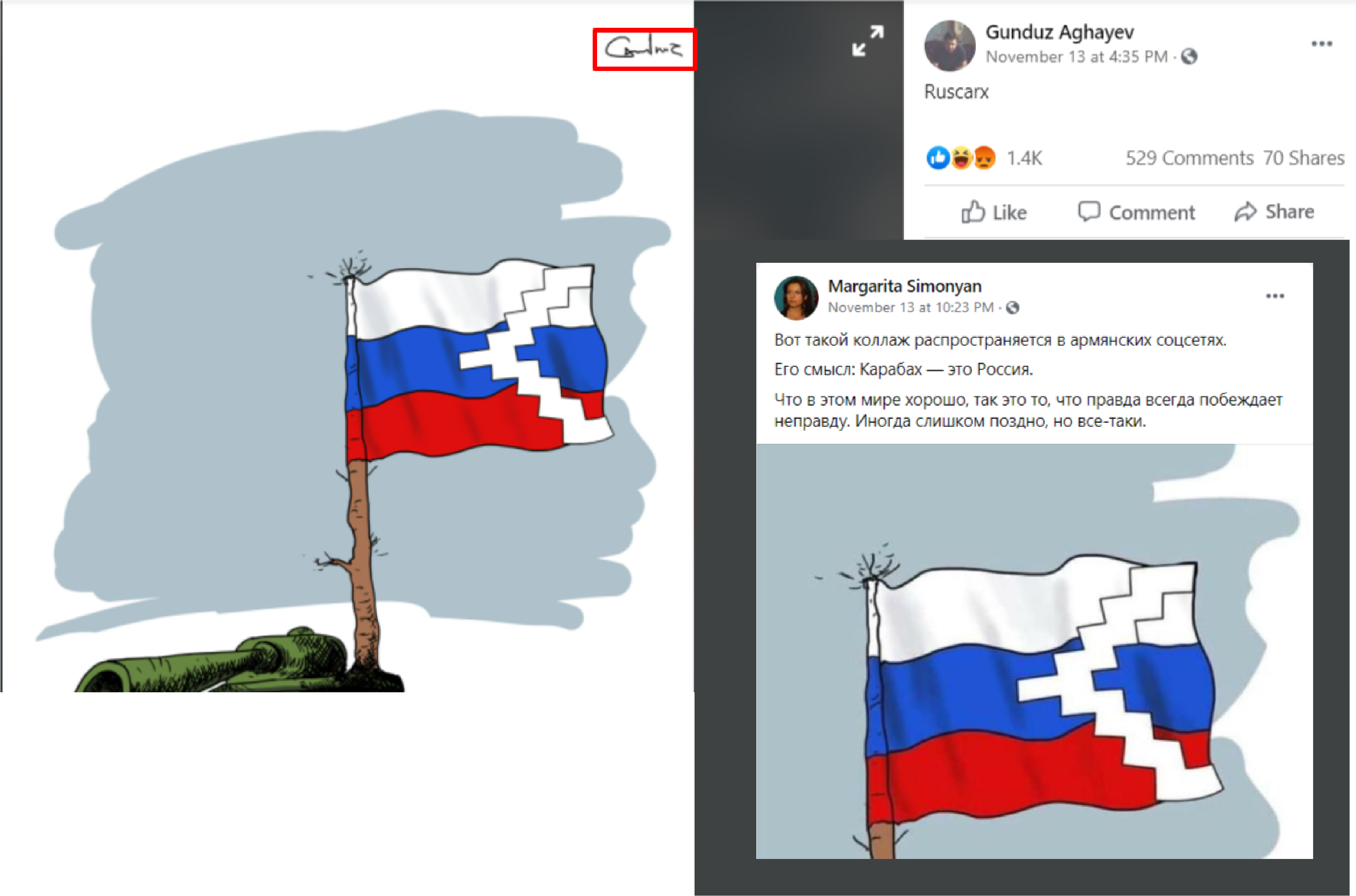 The illustration was hardly spread by Armenian users, taking into account its source. Its author is not Armenian, but Azerbaijani Gunduz Aghayev! This image posted by the latter has dozens of shares and more than a thousand likes. The part of the author’s signature in the picture spread by Margarita Simonyan has been removed.

? A few days later, during NTV’s “Govorit Moskva” program, in addition to host Roman Babayan’s question, Simonyan asked Pashinyan to comment on the information he had. That is, did he consult with the United States for a long time to accept the Russian proposal for a ceasefire statement?

One day later, Pashinyan spoke about it during the press conference. Simonyan’s question was transmitted by the Armenian service of the Sputnik network headed by him (in the video from 48:50).

Prime Minister Pashinyan denied the information, considering it “nonsense” or “manipulation.” He shared that he had 5 conversations with US representatives over the span of a month. The American proposals and the US ceasefire initiative were discussed.

The captured Syrian mercenary is not a “deep fake”

Azerbaijan denies the involvement of Syrian mercenaries in the second war in Artsakh. Announcements were made on the topic by the presidents of France and Russia, the confessions of the mercenaries were published in the international press, photos and videos appeared on the Internet, which were geolocated in the territory of Azerbaijan.

Azerbaijani Ambassador to the United States Elin Suleymanov called the news of the recruitment of mercenaries Russian propaganda aimed at preparing the ground for Russian participation in hostilities.

Ednews.net, founded by Azerbaijanis, wrote referring to “Azerbaijani Realities” that the captured Syrian is a “deep fake.” He is not a Syrian, but a member of the “Kurdish Workers’ Party” fighting on the Armenian side. 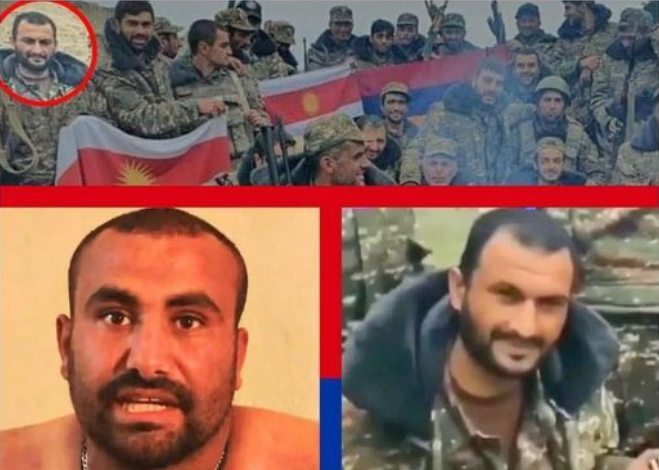 This news is misinformation with several episodes:

❌ There is no evidence that members of the “Kurdish Workers’ Party” fought on the Armenian side.

❌ The people under question in the picture are obviously not the same people.

❌The young man in the picture is from a local Yezidi community fighting on the Armenian side.

❌ The site used the wrong term. Even if the assertion was true, we could call it fake photo manipulation, but by no means “deep fake.”

Deep Fake is a term: By use of an algorithm, using a person’s pictures/videos to get a video of the same person that is close to the real thing but not real. It is difficult to distinguish and is a big challenge for fact-checkers. You can learn more about Deep Fake here from the New York Times.

While deciding on the preservation of the medieval Dadivank in the Karvachar region, which was handed over to Azerbaijan, the First Deputy Minister of Culture of Azerbaijan tweeted that Khudavang (the same Dadivank) was “one of the best pieces of evidence of the civilization of ancient Caucasian Albania.”

The website ednews.net built upon the topic: it quoted a scientist of the National Academy of Sciences of Azerbaijan as saying that the “Armenianization” of the monastery by Armenians is a forgery.

This topic was touched upon by Thomas de Waal, a senior researcher at Carnegie Europe. He denied the claim that the monastery was Albanian, citing its Armenian style and Armenian-language inscriptions. He reminded that the roots of the thesis of the Albanianization of the Armenian churches in Artsakh go back to the 1960s. Its author is Zia Buniatov, a scientist from Soviet Azerbaijan.

? On November 11, it became known that Lieutenant General Rustam Muradov would head the Russian peacekeeping force in Artsakh. Soon the Azerbaijani websites spread information that he was Azerbaijani.

Media.am touched upon the news that caused concern in the Armenian side and found out that it was wrong. The misinformation was spread after a false edit on Wikipedia the same day. Prior to that, the nationality of the soldier was mentioned in Tabasaran.

Shortly after the edit made by an anonymous user, one of the most active Azerbaijani propaganda platforms, haqqin.az, wrote that Muradov is Azerbaijani. Soon, however, the information was fixed on Wikipedia.

? In the second case, an Azerbaijani user posted false information on Wikipedia, claiming that the newly appointed Foreign Minister of Armenia Ara Ayvazyan was of Azerbaijani descent. This news was covered by infocom.

US-backed revolution and a Sorosian government: For what purposes?

The topics of the US and Soros were tied to the Russian propaganda News-front. This platform played a major role in the information front during the events in Crimea. It uses the developments of the Armenian-Azerbaijani conflict to strike Ukraine. It did it during the July escalation and repeated again during the second war in Artsakh.

The website once quoted a Ukrainian blogger as saying, “In countries where there is a Soros Renaissance fund, there is no smell of rebirth, only destruction, only ruins after Soros’s plunder of the country.” The article is titled “Soros ‘Renaissance’ Foundation lost in Armenia – Skubchenko.”

In another case, the Facebook post of former Ukrainian MP Vladimir Oleynik about Soros’ influence was published, “․․․In Armenia, as in Ukraine, Russian schools have been closed and the use of Russian in the media has been restricted. Just like in Ukraine, they hoped for Soros’ help. Did Soros help them?”

During one of the interviews on the site, the President of Ukraine and the Prime Minister of Armenia are called “sorosenok” (in the video from 3:30). Interviewer Sergei Vasilovsky claims that Pashinyan was appointed by the United States to hand over Karabakh, losing the territorial issue to join NATO (in the video from 6:28).

An article on the same website was translated on Armenian websites, urging not to listen to “Uncle Soros’s puppets” “to accept one simple truth” that “Armenia can only exist in a close alliance with Russia, and it is ideal to be part of a common state.”

Solovyov spread a number of pieces of misinformation

The misinformation spread by the Russian “Evening with Vladimir Soloviev” program, hosted by Vladimir Solovyov, was referred to in the Armenian field.

❌ On November 15, the spokesman for the Artsakh President, Vahram Poghosyan, posted that Aram Gabrielyanov had spread misinformation during Solovyov’s program. During the war, Poghosyan allegedly called him to discuss the expulsion of military journalist Semyon Pegov, a member of the WarGonzo project, from Artsakh. “It’s stupid. I had a phone conversation with Semyon a while ago. He is angry with this obviously false information and will respond to it soon,” Poghosyan wrote.

❌ In another case, infocom wrote that Solovyov had spread misinformation on his Twitter account: Nikol Pashinyan did not apologize to Israel for the statement made in an interview with The Jerusalem Post. In reality, he expressed regret that “hours after the publication of the interview with his harsh criticism, Israel became a target, though an indirect one, in the form of a synagogue in Vienna.”

The news of 2,000 bodies from both sides near Shushi is not confirmed

The Russian Русская весна portal wrote on November 25 that the Russian peacekeepers found that more than 2,000 bodies had been handed over to each side near Shushi. This information was spread on Armenian news websites.

FIP.am found out from the Artsakh State Emergency Situations Service that the bodies of about 200 Armenian servicemen were found in the mentioned place.

The International Committee of the Red Cross (ICRC) announced on November 17 that 200 bodies had been exchanged.