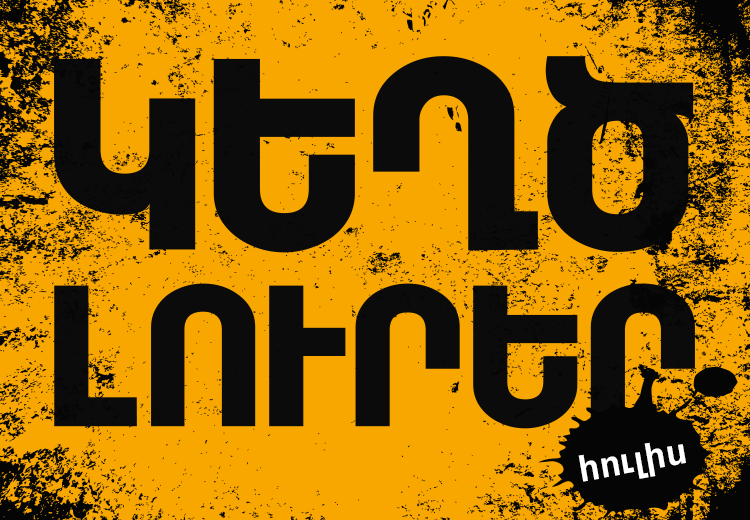 The Armenian-Azerbaijani border escalation since July 12 has been at the center of regional coverage of Armenia. In addition to the information war, propaganda propositions, misinformation was spread and the hypotheses of anti-Russian sentiments had been circulated in Armenia again.

The format of the Karabakh negotiations is the substance of misinformation

The Eurasia Diary website, one of the founders of which is Azerbaijani, referred to the negotiations on the Nagorno Karabakh issue by spreading two pieces of misinformation.

❌ The website claims Azerbaijan and The Minsk Group Co-Chairs have rejected Armenian Prime Minister Nikol Pashinyan’s attempts to bring Karabakh back to the negotiating table.

The statement about the co-chairs does not correspond to reality. Moreover, in 2018, Russian Foreign Minister Sergei Lavrov said, “If the parties agree at some stage that Nagorno Karabakh will be put on the table again, it will be their decision, we will respect it” (in the video from 18:02 minutes).

❌ The website insisted that Pashinyan’s proposal was rejected because it contradicts the basic principles of the negotiations established in March 1992. The documents published by the (now) OSCE say that the participation of the Armenian-Azerbaijani communities in Karabakh is envisaged if there is progress in the negotiations.

There is no such point in the document of March 24, 1992. Instead, point 9 defines, “elected and other representatives of Nagorno-Karabakh, as an interested party, will be invited to the consultations by its president after consultations with the participating states.”

Read more about the format changes of the negotiations here.

❌ Russia Today provides ambiguous background information in several articles when referring to the border clashes. The website wrote about Artsakh, “A large enclave of Armenians living inside Azerbaijan, which declared independence from Baku three decades ago.”

Nagorno Karabakh, as an autonomous unit, declared independence from the Soviet Socialist Republic of Azerbaijan. Despite the impression made by what has been written, it has never been part of independent Azerbaijan. Learn more about this topic in media.am’s coverage.

❌ News-front.info posted a picture of former NSS director Eduard Martirosyan and quoted on the EADaily website, which in turn quoted VERELQ, which quoted the former NSS director and leader of the Homeland party, Arthur Vanetsyan. “It was announced on local radio that the ‘fifth column’ of foreign forces is working against the friendship between Armenia and Russia,” the website wrote. 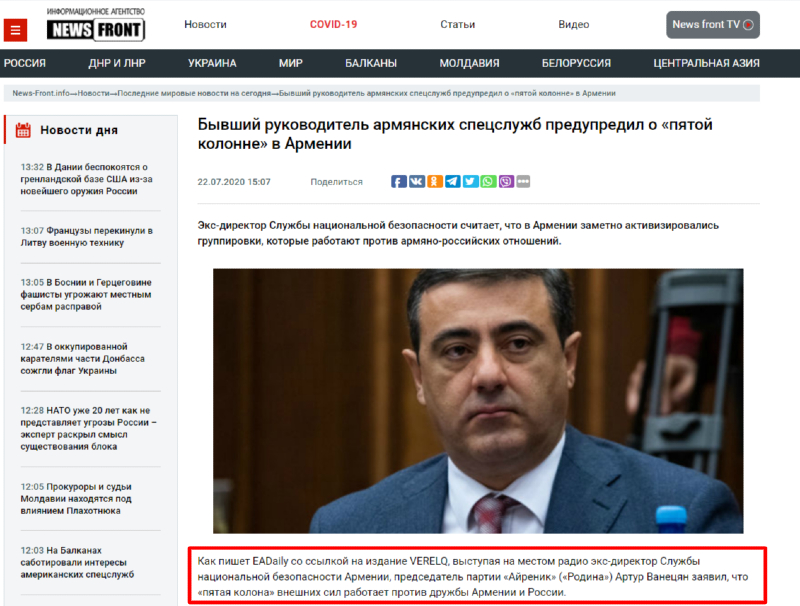 Looking at the source, it turns out that in addition to posting a picture of another person, the type of media outlet mentioned in the news is also wrong. It is not about the radio, but about the website, 168․am.

❌ Official Tbilisi has denied allegations in the Azerbaijani press and Georgian opposition circles that Russia plans to send 300 military trucks to Armenia via Georgia.

The topic of weapons was further developed by Hikmet Haji, Advisor to the President of Azerbaijan. During the press conference, he said without any factual basis that the military-political leadership of Armenia is creating fake companies, through which it buys and sells weapons at a low price to a third party. “There is strong evidence that these weapons are falling into the hands of terrorists,” he said.

Official Baku responds to separate Armenian publications, and in the Russian field they are placed on the same plane

In addition to the obvious accusations, official Baku was hunting down certain media publications and officially responding to them. Media.am has singled out two such cases.

One of them was the statement of the spokesman of the Ministry of Defense of Azerbaijan that Baku is capable of launching a “high-precision” missile at the Metsamor nuclear power plant. It received a great response in the local and international field. According to the Azerbaijani side, this threat was a response to the statements made by Armenia about the damage to the Mingechaur hydroelectric power plant.

However, no official source in Armenia has made such a statement. Instead, Vagharshak Harutyunyan, who took office about 20 years ago, spoke about the technical possibility of damaging the hydroelectric power plant before the border clashes in Tavush.

Later, in Azerbaijan, the statement of the Defense Ministry spokesman was presented as a personal point of view. And in some Russian platforms, the announcements of these different levels were considered as though from the same plane.

Russian propaganda news-front.info, which played a major role in the information front during the events in Crimea, actively covered the Armenian-Azerbaijani border escalation. The topic of Ukraine went across them like a red thread.

❌ In one of the references, the motives of Ukraine’s pro-Azerbaijani position are discussed, and a factual error is published in terms of information. According to the website, the battles have been taking place in Nagorno Karabakh since July 12. In fact, there have been ceasefire violations in Karabakh, however, no hostilities have taken place there during these days. The border tension was in the territory of Armenia, in the Tavush region.

? In another publication, the website referred to the invitation of the Ambassador of Ukraine to Armenia to the Ministry of Foreign Affairs. The invitation took place after the pro-Azerbaijani statement of Ukraine. The website reminded that the Ambassador of Ukraine to Armenia is the father of the Minister of Foreign Affairs of that country and described the event in such a vocabulary ․ “The Ukrainian Foreign Ministry has been scolded again for his long tongue, the father was ready to answer in the place of his foolish son.”

? In another article, News-front.info referred to the clashes between Armenians and Azeris in London without upholding impartiality. “Azeris living in London held a protest rally against provocations carried out by Armenia in the direction of Tovuz region.”

The hypothesis of anti-Russian sentiments in Armenia has been circulating in the Russian-Armenian media field since last month. There were several reasons for this in July.

? The inclusion of an episode from the speech of the opposition Alexei Navalny on the topic of the referendum on the Constitutional amendments of Russia caused a stir in the report of the Public Television of Armenia. One of the Kremlin preachers, Vladimir Solovyov, responded to this. “Look at who is being shown on Public Television in our friendly Armenia. They are showing Nazi Navalny, who called the Armenians ‘crosses,’ who hates the Armenians, hates Armenia, despises it…” he said (in the video from the 34:30 minute).

Navalny responded to this, and the Union of Armenians of Russia declared that it was an “anti-Armenian action”, a “provocation” that calls into question the Armenian-Russian friendly relations. Read more about this media war and how Armenia is made an excuse for it here.

? A publication of “Fact” newspaper stating “the fact of the activation of anti-Russian sentiments can not even be hidden anymore” appeared in the local media, then it was exported to the Ednews platform, one of the founders and one of the editors-in-chief are Azerbaijanis.

In a conversation with Russian Sputnik Armenia, Defense Ministry spokeswoman Shushan Stepanyan, in response to similar allegations, said, “According to the Minister of Defense’s approach, the announcements and publications on the suspension of the 102nd military base are due to a lack of morality, geopolitical and military-political antiquity.”

? Margarita Simonyan, editor-in-chief of the Russian RT Россия сегодня agency, made a post after the border escalation. Addressing the authorities, she wrote at length about anti-Russian sentiments in Armenia, NGOs working in the same mood, not recognizing Crimea, and imprisoning Kocharyan, “Russia’s faithful ally.”

In response to the question, Nikol Pashinyan addressed this post in an interview with the Russian RBC (in the video from the 17:58 minute). The Prime Minister reminded that such non-governmental organizations “were created at a time when no one in Russia doubted the pro-Russian aspirations of the Armenian government.” And the faithful ally of Russia, the Prime Minister emphasized, is not Pashinyan, Ter-Petrosyan, Kocharyan or Sargsyan, but the Armenian people.