October 16-31: False and Refuted News About The Artsakh War 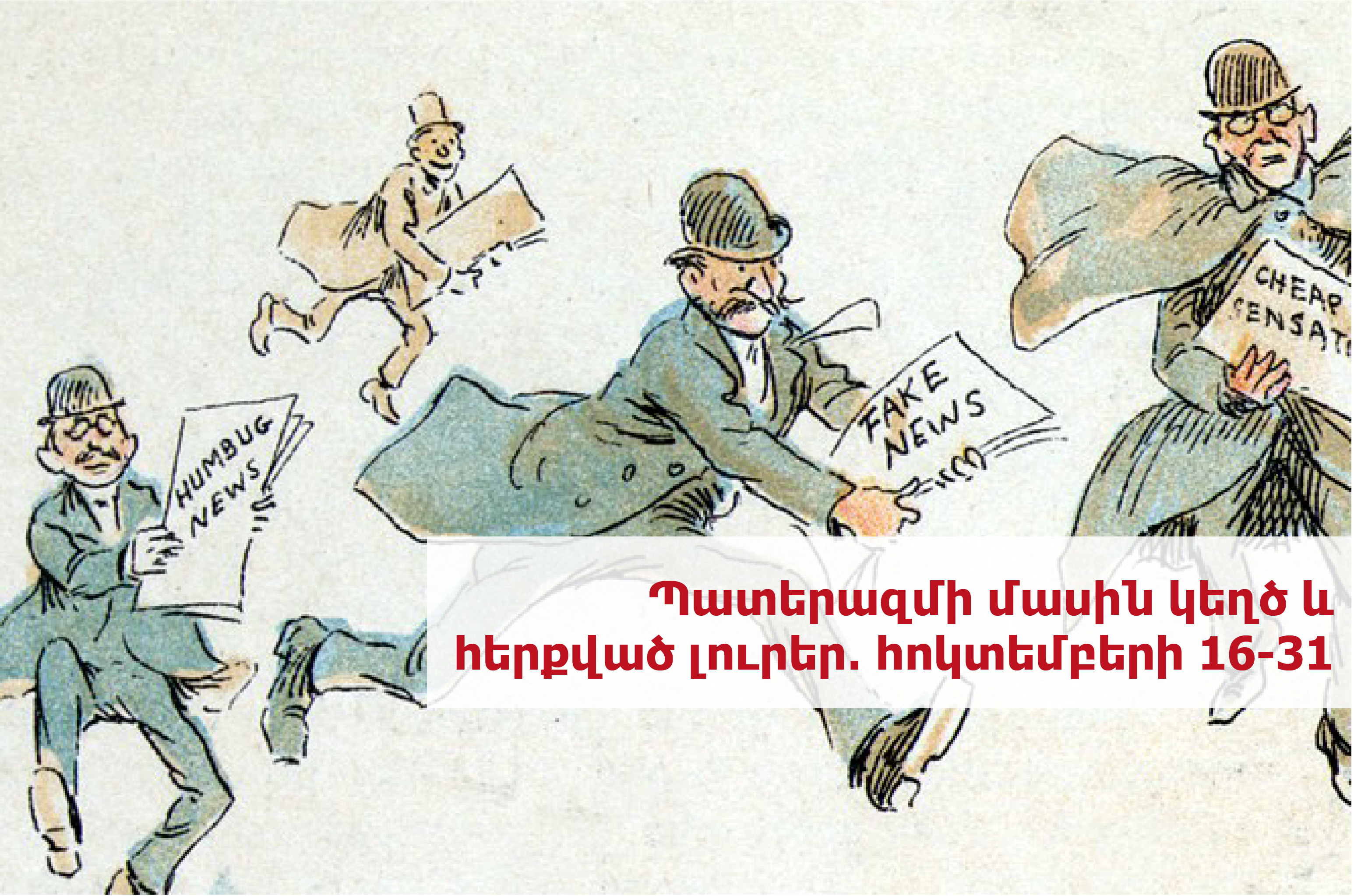 Media.am summarizes the misinformation spread during the second Artsakh war for the third time (first, second). These pieces of information penetrate the field from the outside and are created on the spot. They come in a variety of formats, from creating mushroom sites and fake accounts to making mistakes, using old or unrelated photos/videos, and more.

Sputnik Armenia is wrong: Sending captives to a third country is a choice, not a compulsion

On October 23, Sputnik Armenia referred to the story of Azniv Baghdasaryan captured in Azerbaijan. With more than 25,000 views without any validated data, the site claimed: “In fact, even if the captives are transferred, they are sent to a third country.”

In July 2020, Media.am studied the data on repatriations of those who had crossed the border, based on the reports of the International Committee of the Red Cross. It turned out that 55 people had repatriated from all 3 sides in 2001-2019. There has been only one such case since 2001 when a person (citizen of Azerbaijan) had moved to a third country.

In a conversation with media.am, Zara Amatuni, head of the ICRC’s communication and prevention programs, clarified the circumstances in which a person is repatriated. “The organization coordinates the return of a person to the homeland only in case there is an agreement with the relevant authorities and the person. If a person does not wish to return, we have no right to arrange for that person to return against their will,” Amatuni said.

If refugees wish to relocate to a third country, that process is handled by the Office of the United Nations High Commissioner for Refugees (UNHCR).

The National Security Service of Armenia informed on October 20 that fake news sites and fake social network pages had appeared. These pages spread misinformation about high-ranking Armenian officials, people connected with them, as well as many domestic and foreign policy events. In addition to being false, they contain significant elements and components detrimental to the security of Armenia and the Artsakh Republic.

For example, the mushroom website lurer.live spread news that the Secretary of the Security Council of Armenia, Armen Grigoryan, was a traitor. PAP MP Gevorg Petrosyan shared it on his page asking “People, is this right?” 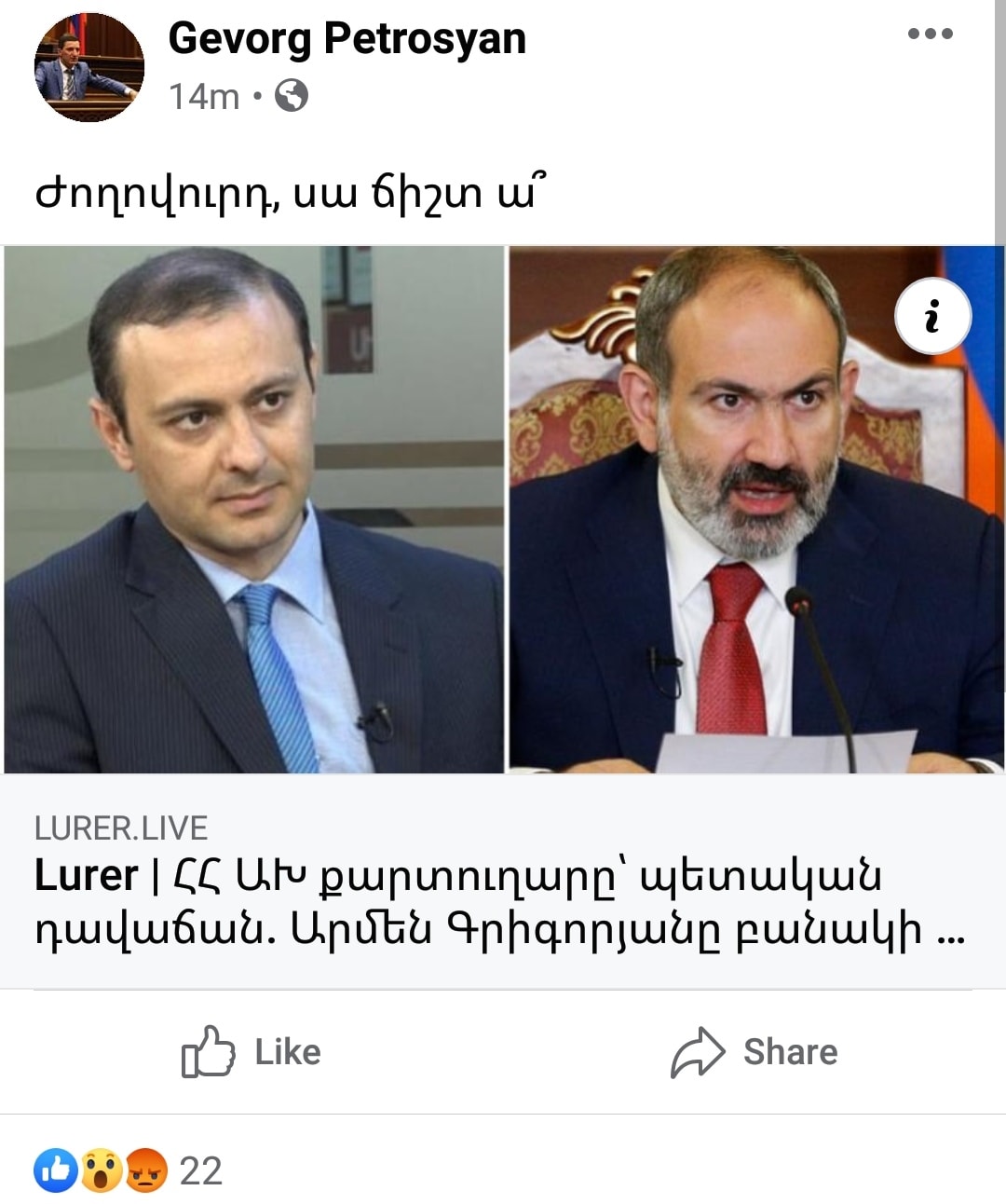 This site regularly disappears and returns. It does not contain editorial information or contact information. Samvel Martirosyan and Arthur Papyan, information security specialists, have spoken about differentiating unreliable websites using this one as an example.

On October 15, two videos of the humiliation and murder of two Armenian prisoners of war appeared on the Azerbaijani Telegram channels. Later, the material was removed from some channels. Instead, the Ministry of Defense of Azerbaijan announced that they had nothing to do with those videos and that it was staged by Armenians.

Examining the content of the two platforms dealing with open source investigation, they proved the opposite. DFRLab informs that the weapon in the videos is from the arsenal of the Azerbaijani army. The uniforms of the captives are in Turkish print.

And Bellingcat.com, studying the available data in more detail, confirmed that those who were killed had been from the Armenian side. They were captured on October 9-15 by Azerbaijani servicemen, most likely by special forces, and were killed shortly afterward.

The Azerbaijani side released a video on October 27, claiming that Lieutenant General Jalal Harutyunyan was killed.

Earlier in the day, by the decree of Artsakh President Arayik Harutyunyan, Jalal Harutyunyan was relieved of the post of Commander of the Defense Army. It is reported that he is injured, his dismissal is a condition of that circumstance.

The spokesman of the President of Artsakh, Vahram Poghosyan, informed that Jalal Harutyunyan’s life is not in danger, the wound he received in one of the combat positions is not serious and he will return to the army very soon.

A few days later, the Prosecutor General of Azerbaijan announced that three Artsakh officials, including Jalal Harutyunyan, were internationally wanted.

Yezidi volunteers fighting in Artsakh are presented as terrorist militants

The pan-Turkic “Günaz TV” and the Iranian “Sepahcybery” Telegram channels published a video on October 15 featuring members of the military, presenting them as Kurdish terrorists fighting on the side of Armenia.

Infocheck.am gives us more information about this, explaining that the people in the video are representatives of the Yezidi community living in Armenia, who volunteered to protect the Republic of Artsakh from Azerbaijani attacks.

The words spoken in the video are in Yezidi, in which they say, “Who are we? We are Yezidis” The Yezidi flag is visible. Besides that, the people in the video are identical to the representatives of the Yezidi community, whose photos were spread on the Armenian circles of Facebook yesterday. The same video was posted on the Yezidi “Pers_tna” channel on Instagram.

100 Armenian soldiers were not found

The author of the program “Sharp Corner,” Vahe Ghazaryan, wrote on his Facebook page on October 20 that “100 healthy soldiers were found in the liberated territories.” 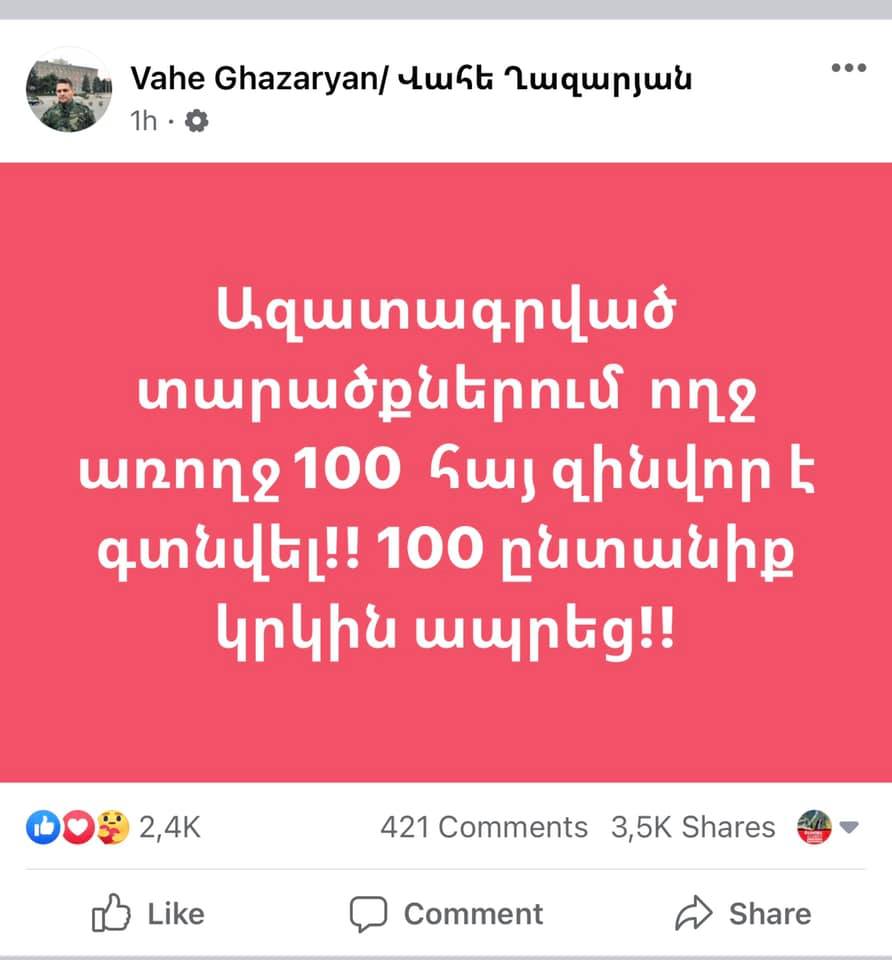 This emotional post spread very quickly and was edited two hours later. Without naming the source, Vahe Ghazaryan wrote that “the source of the information had removed their publication.”

The Chinese CGTN made a mistake: The funeral was in Artsakh

On October 18, the China Global Television Network (CGTN) posted footage of a funeral of victims from the Armenian side on its Instagram page, presenting it as a photo taken in Ganja.

The author of the photos is Aris Messinis from Agence France-Presse. He mentioned in a post on his personal page that the soldiers’ funeral was in Stepanakert. Besides that, the flag of the Republic of Artsakh and Armenian inscriptions can be seen in the pictures. 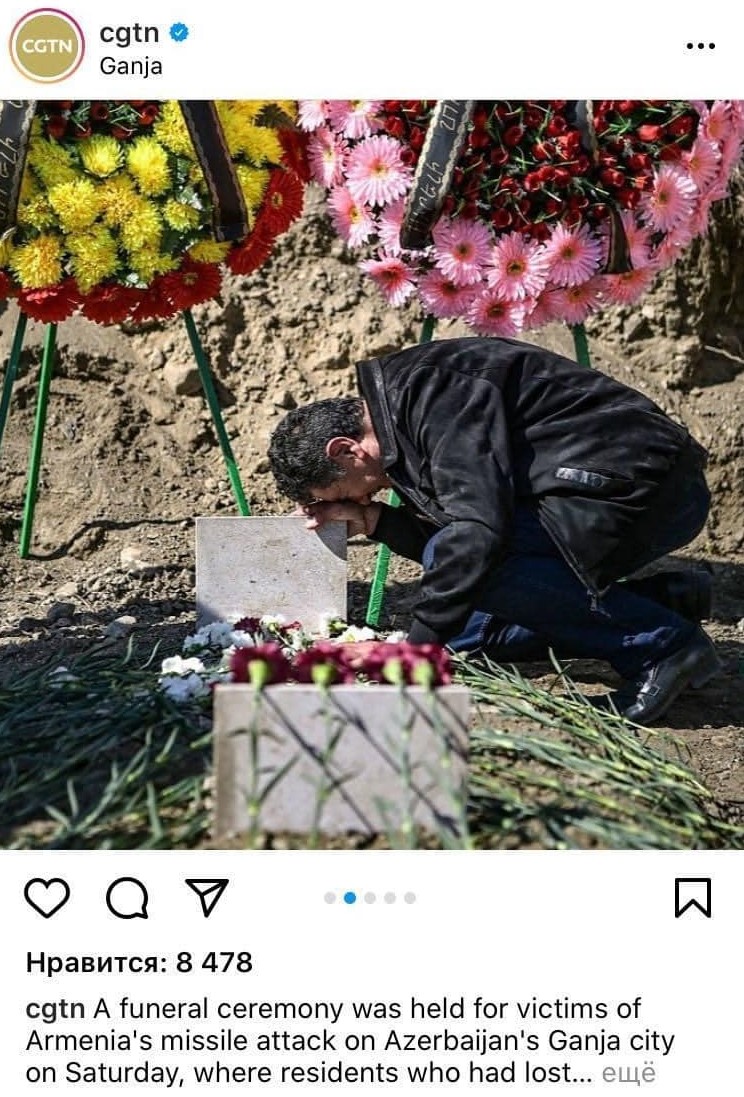 After a large wave of corrections made by the audience, the page removed the post, posting a correction that is no longer available! 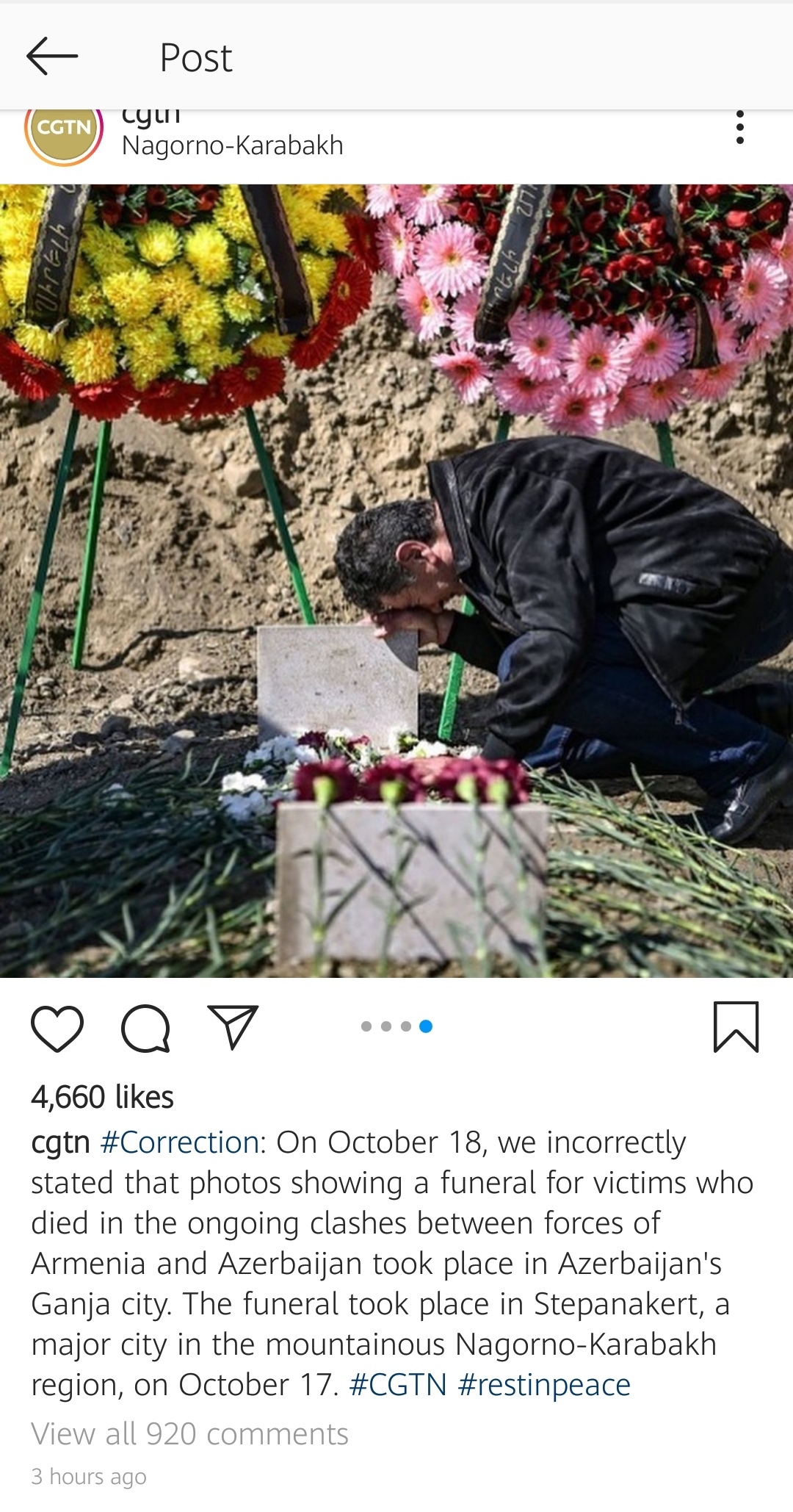 ? The footage of the Ganja rocket was presented to the Turkish media on October 16 after a rocket attack on Nakhichevan. Source: Ara Petrosyan 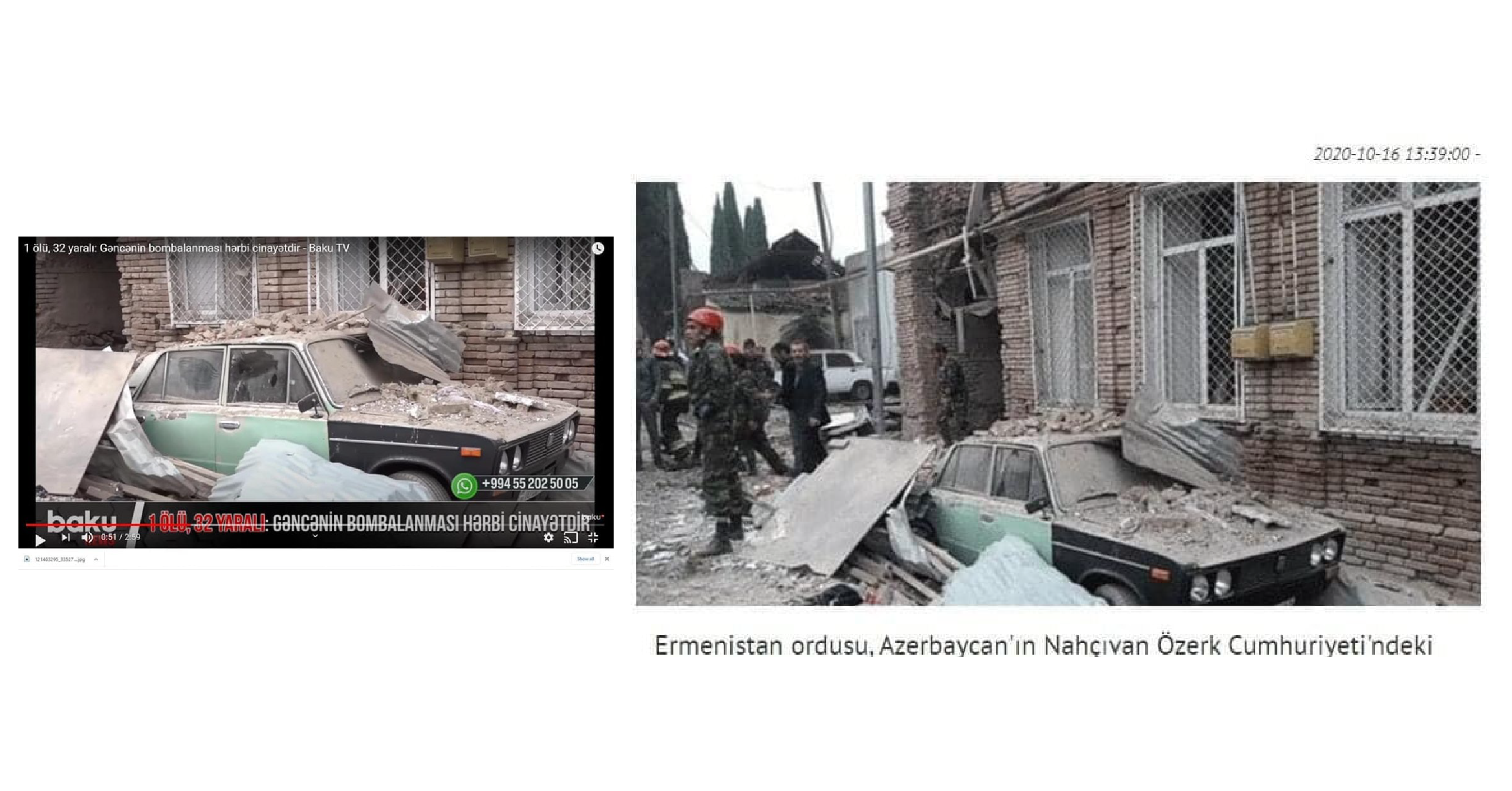 ? The footage of the re-burial of the victims of the Second World War was presented in Azerbaijan as a burial taking place in Stepanakert. Source: hetq.am. 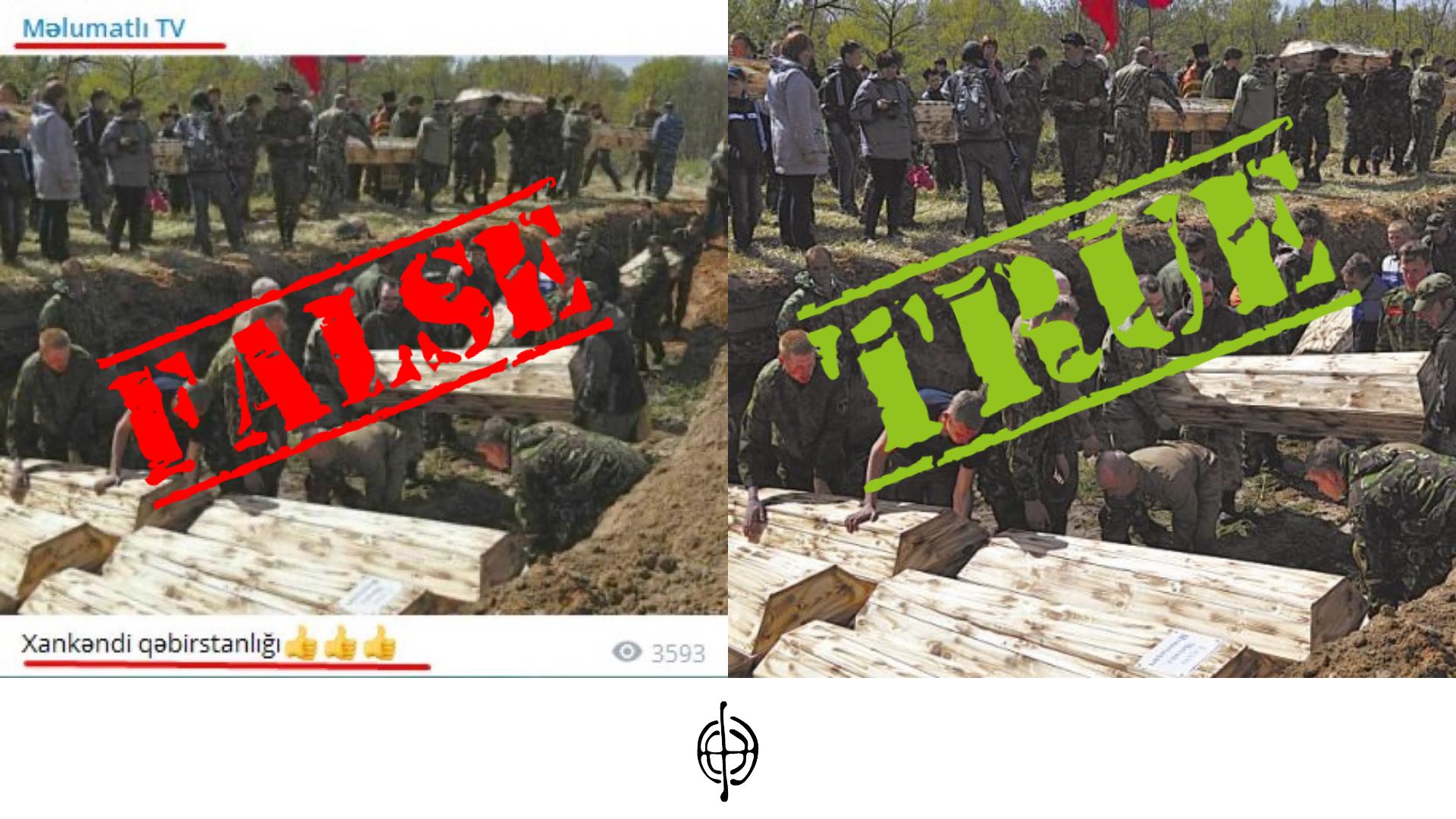 ? The Azerbaijani media presented the photo of juveniles being armed as evidence that the Armenian side is using minors in the war. The photo was spread on the Internet at least back in April 2016. Source: FIP.am. 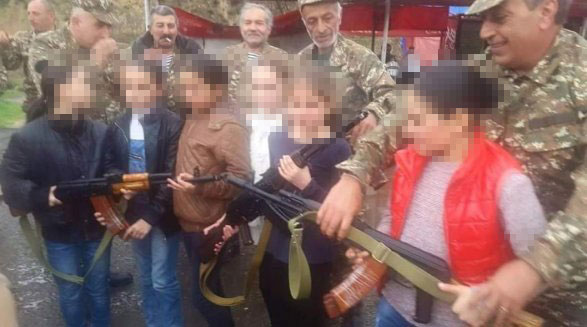 ? Artsakh ombudsman Artak Beglaryan also touched upon the topic of children’s participation in the war. The 16-year-old boy, who is seen in a video released by an adviser to the President of Azerbaijan, is carrying out the operation with his father.

Beglaryan clarified that the participation of children under the age of 15 in hostilities is prohibited by international law.

? This photo, presented after the destruction of the city of Ganja, was taken in Syria in 2015. Source: infocheck.am 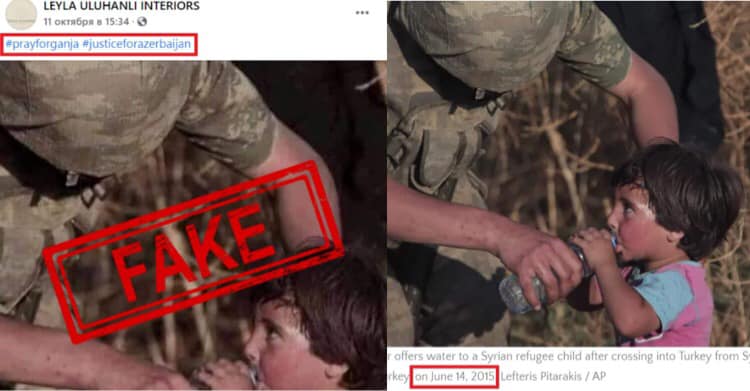 ? The pictures of the doctor and soldier’s hands spread on social networks have nothing to do with Armenia or Artsakh. One of them was taken in the summer of 2020: It is the hand of a doctor fighting COVID-19. The second one is also a photo taken earlier and which appears from time to time on the internet with different comments. Source: Narek Martirosyan 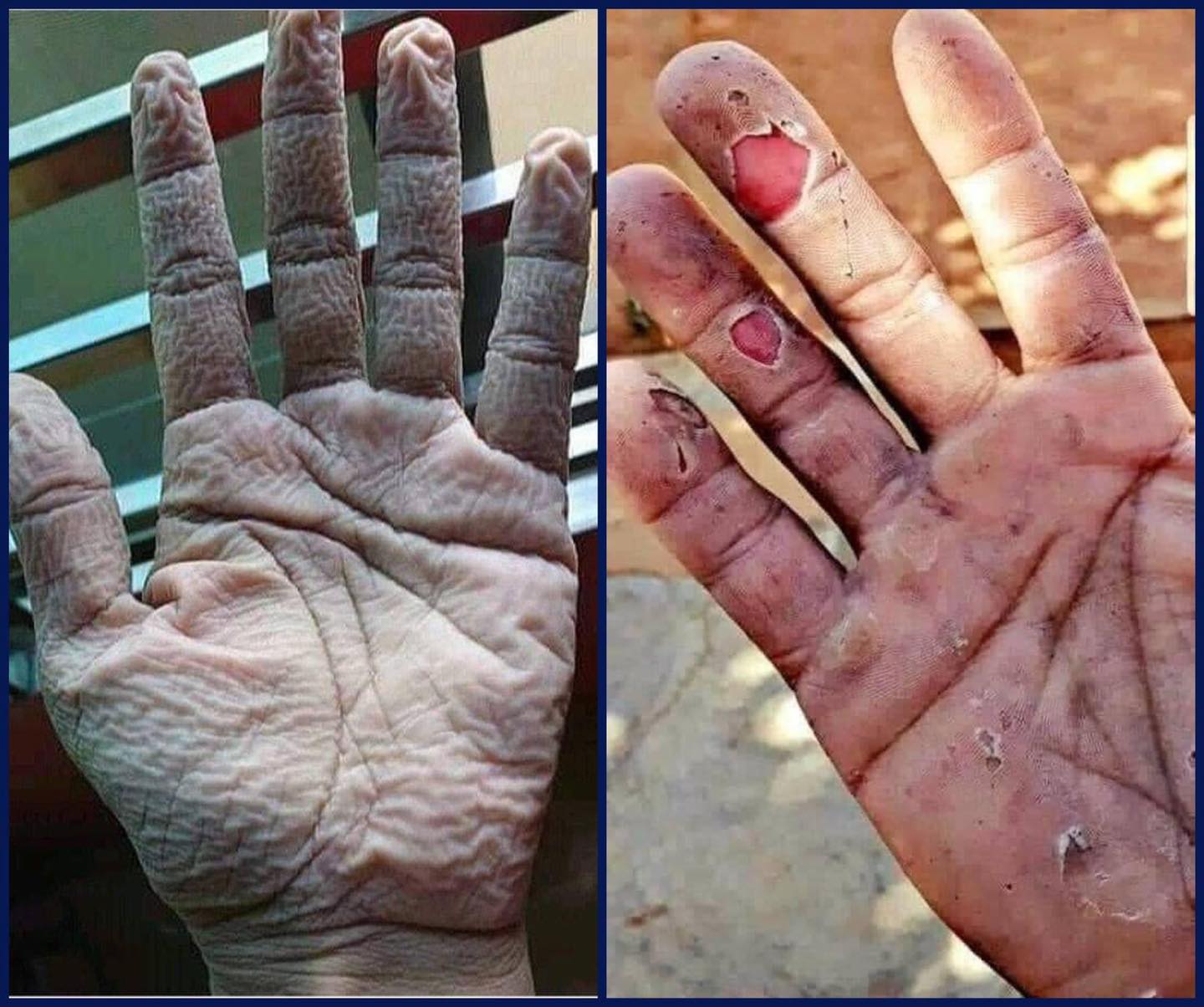 ❌ The NSS informed that false information was spread on social networks through fake pages with Azerbaijani traces. Allegedly, the enemy targeted the Hrazdan Thermal Power Plant. Residents of nearby communities were also urged to leave their homes.

❌ Viva-MTS reported that the information about Ralph Yirikian, the General Director of the company, about his arrest, investigation, involvement in any legal process or case and his complicity in criminal acts, is completely false, imagined and untrue.