September 27-30: False And Refuted News About The Artsakh War 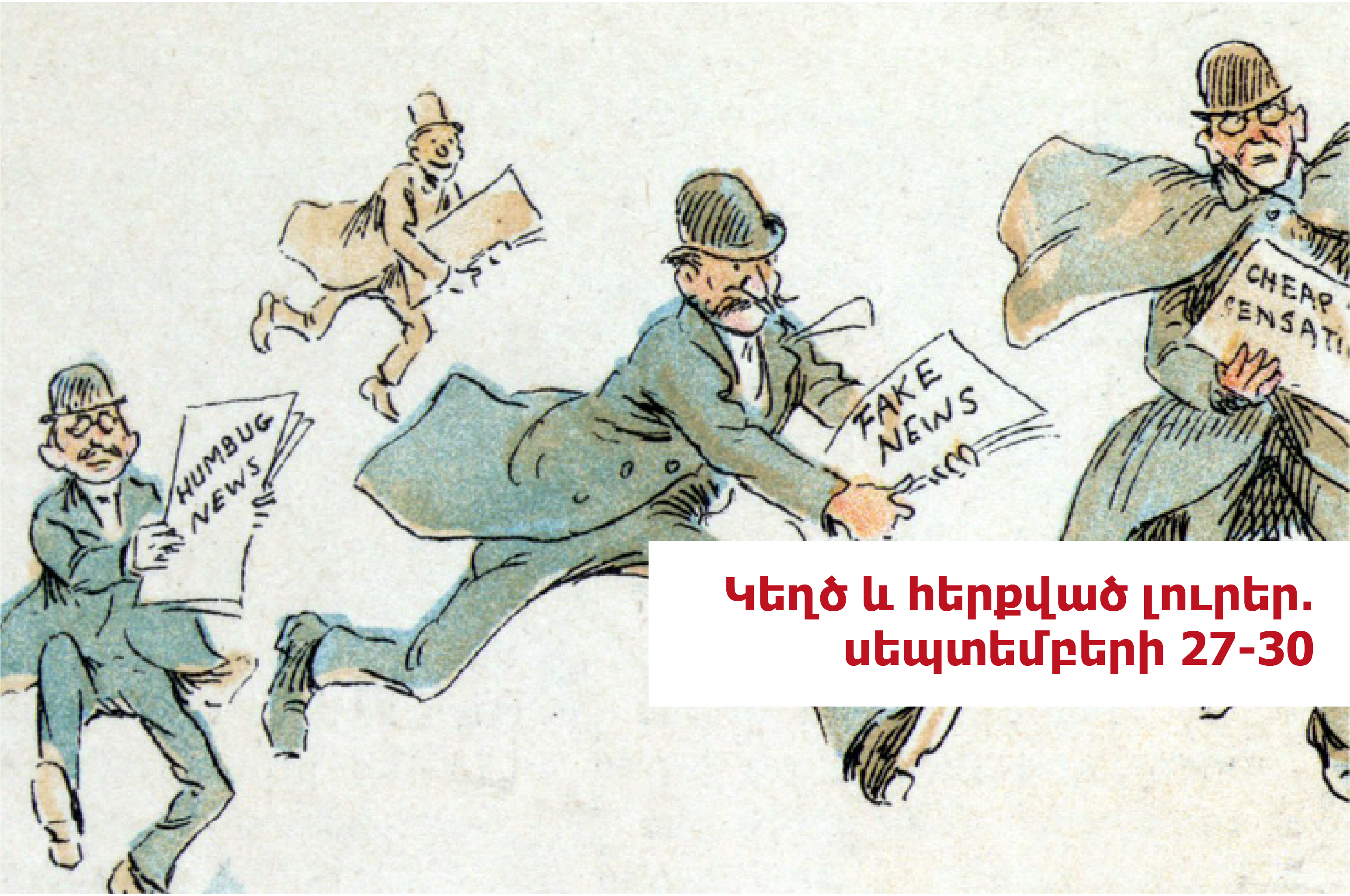 The Azeri propaganda war started before the escalation

In the information war, both during the July escalation and the war that started on September 27, the Azerbaijani side, among other things, used fake and broken social network accounts. These accounts have been created or activated in recent weeks. Media.am has written about one network spreading misinformation already.

However, before the war, Azerbaijan had already launched an information attack. For example, on September 24, information security specialist Samvel Martirosyan referred to a false decision circulating on behalf of the Artsakh NSS. 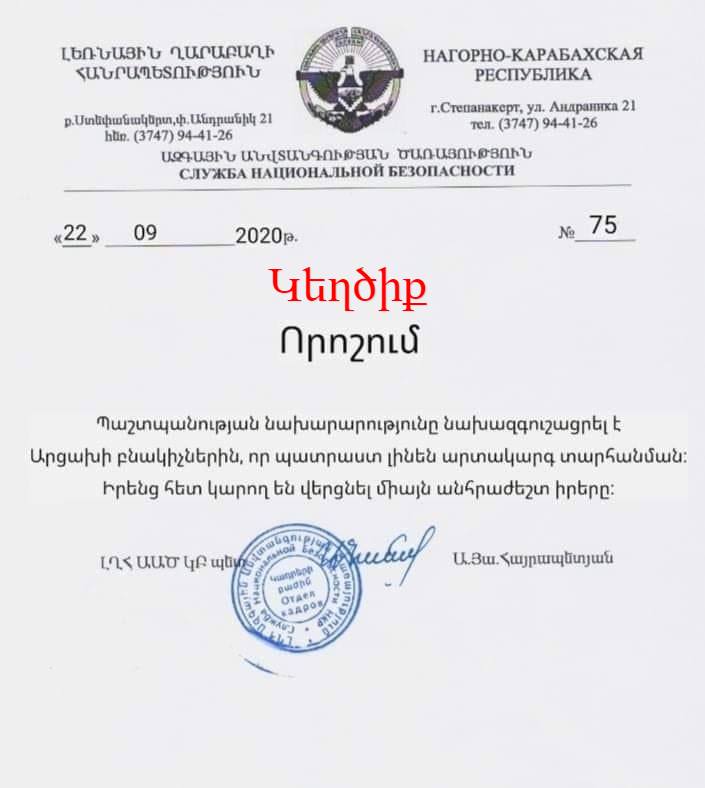 The Ministry of Defense allegedly warned the population of Artsakh to be ready for an emergency evacuation. This message was sent via messenger.

An Armenian website was manipulated by Azeri propaganda regarding negotiations

Arsen Kharatyan, who worked as an advisor to the Prime Minister shortly after the revolution, made a Facebook post on September 24, referring to the propaganda publication of the Azerbaijani website haqqin.az. It was alleged that Kharatyan had secret talks with the Azerbaijanis in 2018, in the format of territories in exchange for peace.

Kharatyan had denied this news, considering it “imaginary.” Based on all this, 7or.am published an article entitled “The ‘transcript’ of the secret Pashinyan-Aliyev talks has been revealed.” The website posted their own invented shorthand commenting, “Judging by all this, it is possible to present the details of the conversations that took place between Nikol and Ilham’s in 2018 with almost 100% accuracy. It basically looks like this. I repeat, this is an assumption, but a very plausible assumption.”

Two buildings in Tbilisi were decorated with the colors of the Azerbaijani flag, but earlier on another occasion

On September 30, the Armenian Embassy in Georgia clarified that the Tbilisi TV tower and Peace Bridge was illuminated in the colors of the Azerbaijani flag on May 28 of this year, the day of the national holiday of Azerbaijan. The rumors that Georgia is expressing its support to Azerbaijan with such lighting do not correspond to reality.

On September 29, it turned out that the name of a living person was published in the official list of victims. A user named Mark Hovhannisyan talked to the “victim” and wrote about it on Facebook. The mistake was confirmed by the Defense Army.

On September 28, false news was spread in the Azerbaijani and Turkish media that Lieutenant Colonel Lernik Babayan had been killed by the Armenian side. This news was denied by the representative of the Ministry of Defense Artsrun Hovhannisyan. And the Primate of Tavush Diocese T. Bishop Bagrat Galstanyan personally met with the lieutenant colonel. Lernik Babayan said live on Facebook that he accepted the news of his death with irony.

In the same way, the former Secretary of the Security Council of the Artsakh Republic Arshavir Gharamyan personally denied the news of his death.

Misinformation continues to spread in the propaganda media field. The Armenian side regularly publishes the denials of the false contents of the official statements of Azerbaijan. Some of the common denials that have come across recently are presented below.

❌ The Artsakh Information Headquarters informed that the news spread in the Azerbaijani press that a bunker had been destroyed in Artsakh, where there were high-ranking Armenian servicemen, was false, and the photo was old.

❌ The news of the siege of Martakert was denied by the representative of the Artsakh Defense Army Suren Sarumyan.

❌ On the first day of the fighting, the message spread by the Ministry of Defense of Azerbaijan that the Azerbaijani army had occupied 6 settlements was denied. The Armenian Defense Ministry described the news as “another information provocation of the Azerbaijani propaganda machine.”

❌ On the same day, another news spread by the same structure was denied, according to which the Azerbaijani army had taken control of the Vardenis-Martakert highway.

These days, misinformation is spreading among the citizens that there will be radiation, that technical devices must be turned off. Or a person is driving around, collecting food for the border, but will put narcotics in it.

What did Media.am reveal over the course of these days?

On the first day of the battles, media.am studied the media field and found out that the Armenian media use old photos when reporting official, verified information.

Hraparak.am published old pictures, screenshots of unspecified origin, as if Russia was transporting a large number of weapons to Armenia. In recent weeks, official Baku has been spreading unconfirmed news with such content. And the Eurasianet noted that in this way Azerbaijan was trying to create diplomatic obstacles to supply arms to Armenia.

President Armen Sargsyan’s idea was mistranslated and presented in the official Twitter microblog of the president. In his English speech, Sargsyan noted that the Azerbaijani side is targeting “Cars with a red cross.” In the case of the Armenian translation, the idea was conveyed correctly, and in the Russian and English texts it turned out that the Red Cross (ICRC) vehicles were targeted. Tweets with the translation error were later removed and the edited versions were published. The tweet with the wrong translation was spread by NA Deputy Speaker Alen Simonyan.

We have also referred to various sources who confirm that Turkey is sending Syrian militants to Azerbaijan.