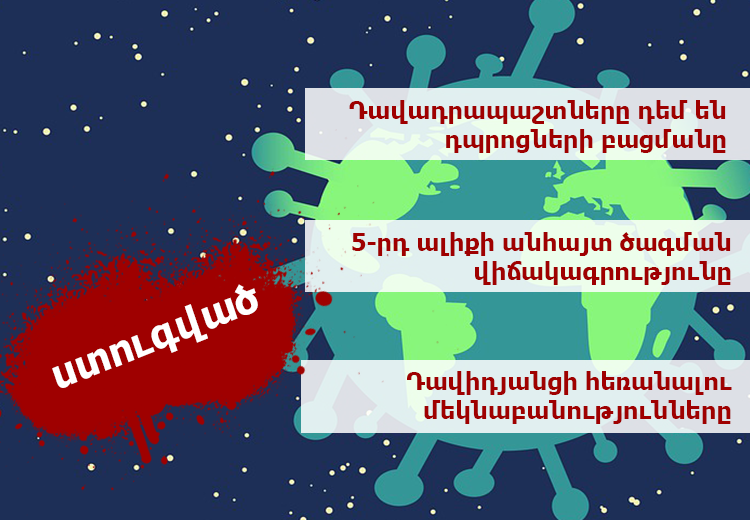 Media.am presents the misinformation and conspiracy theories about the epidemic spread from the end of July to August 21.

In addition to masks and vaccinations, the issue of returning to school with a mask and maintaining social distance became a topic of discussion. The dismissal of Mher Davidyants, who headed the “Nork” Infectious Diseases Medical Center, caused a stir.

Lusine Haroyan-Dallakyan, the candidate for the post of Prime Minister in the 2018 special parliamentary elections, offered material to parents and teachers to “read carefully” and “seriously think about” from the Facebook page of the user Na Ha.

The author found a conspiracy theory in the reopening of school. Its main purpose is vaccination. “BOYCOTT SCHOOLS  in the form they will take on starting September 15. IT IS A TRAP,” the publication reads.

In another post, Haroyan-Dallakyan spoke against going to school in masks, putting forward conspiracy theories again, according to which Nikol Pashinyan and his team are “a pawn of globalist evil.” They “engaged in child molestation, the sale and purchase of women and children, exploitation, the sale of organs, and the grafting of rejuvenating stems.” And the great goal of all that is to destroy “our Highland”.

There are still those who oppose the new normal school 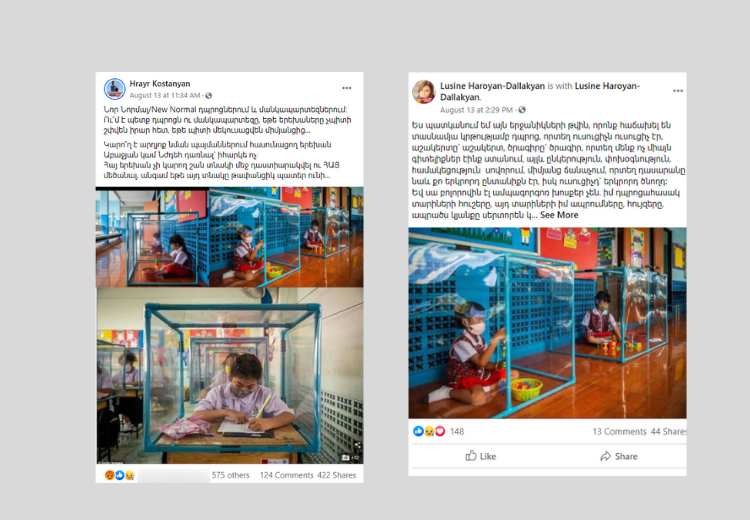 Hrayr Kostanyan from the “Hayk” initiative spoke against going to school and kindergarten under the new normal conditions. His reasoning is, “Can a child growing up in such conditions become Abajyan or Nzhdeh? Of course not! An Armenian child cannot be brought up in a dog kennel and grow up to be an Armenian, even if that kennel has transparent walls…”

Statistics of unknown origin: Americans do not want to be vaccinated

Channel 5 made reference to a sociological survey on COVID-19 vaccines in the United States, without mentioning its source. According to the data provided, every third American is against the vaccine, even if it is offered for free.

From the data provided by Channel 5, it is not clear…

There was a case in the past when Channel 5 presented the sociological poll distorted and manipulated.

The resignation of Mher Davidyants

On August 7, the head of the Nork Infectious Diseases Medical Center, Mher Davidyants, informed the staff that he had met with the Minister of Health Arsen Torosyan and submitted a resignation application. The misleading doctors were especially active in commenting on this news.

📌 In a conversation with medmedia.am, Marina Khachatryan, who spreads conspiracy theories about the Coronavirus, said that Davidyants participated in the “corona show.” In other words, there were no patients in the “Nork” Infectious Diseases Medical Center, but medical histories of the disease were opened in their name and huge sums of money were “wasted and written off.”

📌 In a conversation with the same website, doctor Nune Nersisyan developed the topic more. According to her, “the ‘Nork’ Medical Center has been a very big ‘money laundering institution’ during the epidemic.” According to Nersisyan, if Davidyants is smart, he will be the first to report the crime. In that case, at least he will have mitigating circumstances.

📌 Armen Grigoryan, known from the KVN project, who has recently been actively criticizing and spreading conspiracy theories on the topic of COVID-19, also expressed his opinion on this occasion. He expressed the same thought as Nersisyan, “since they haven’t nailed you for the ENTIRE Covid-ian story yet, go and testify first.”

📌 Medmedia.am grant program coordinator, doctor Gevorg Grigoryan, told tert.am that Davidyants’ resignation was the result of foresight. “He did not agree to be offered the post of deputy director because, as far as I know, the director of the Infectious Diseases Hospital will be a prominent representative of the LGBT community’s NGO,” he said.

Gevorg Grigoryan is a member of the Board of Trustees of the former head of the National Security Service Arthur Vanetsyan’s “Harenik” Foundation. In an interview with Channel 5, Grigoryan did not rule out entering politics.

Doctor Hayk Manasyan, who comments on the coronavirus live on Facebook, has reached the end of his myths on this topic. In conclusion, this is how the doctor titled his live broadcast on Facebook on July 30.

In the summary of the topic, he presents in detail his professional activity – diagnosis. He said he diagnosed the virus with the same method and concluded, “At first it seemed to me that our task was to overcome the epidemic. Today I have come to the conclusion that the goal is to prolong the epidemic.” (In the video from the 22:22 minute mark).

Let’s explain: The doctors came to Armenia with US funding, there is no need to be so surprised. Manasyan’s assertion is groundless and conspiratorial.

This video of Manasyan was also shared by A1 +. As of August 24, it has more than 11 thousand views on their YouTube channel. Manasyan’s Facebook live has 87 thousand views.

The fake news page has opened a daughter page

The “Coronavirus = Century Affair” page which circulates misinformation about the coronavirus, claimed, “This ‘dirty’ game looks like chess to me, where globalists are playing against humanity.”

The page tries to “save” people from getting vaccinations, “We have 4 months to prepare for the endgame. We must start the awareness process from now on so that no reasonable person agrees to be vaccinated.”

For that purpose, the administrators of the page have opened another page, “Say No to the Deadly Vaccine.” In doing so, they recruit people for “anti-propaganda” on the subject of vaccinations.

In addition to textual propaganda, conspiracy theorists who oppose the COVID-19 vaccine resort to photo manipulation. 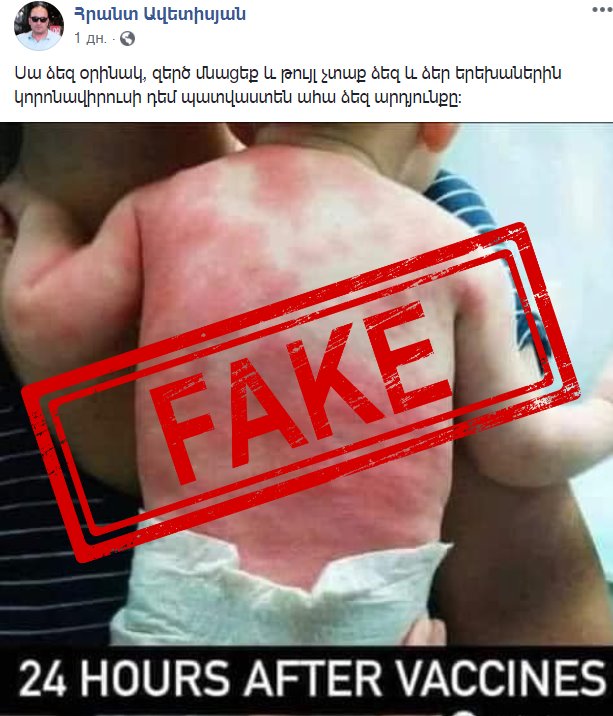 A photo of a child with a swollen body was spread on social networks and is being presented as the results of a COVID-19 vaccine test. It turns out that the photo appeared on the Internet in 2018 when the new type of coronavirus did not exist.