False and manipulative news in the region about Armenia: August

In August, regional media compared Armenia to Belarus, repeating the propaganda story of a “color revolution.” On Vladimir Solovyov’s YouTube channel, they again complained about the Armenian authorities and further manipulated the denied conspiracy theory.

Propagandists declared the Armenian revolution “colored” and compared it to Belarus

After the presidential election, large-scale protests began in Belarus against Alexander Lukashenko, who has ruled the country for 26 years. In Belarus, Russia, and Azerbaijan, these demonstrations were almost immediately called an “attempt of a color revolution” and compared with Armenia.

? Lukashenko was showing footage of demonstrations and violence from Ukraine, Armenia, Kyrgyzstan, etc. from his pre-election commercial. According to Eurasianet.org, it is not clear whether the footage on display is from Armenia or not, but there was no such violence during the Armenian Velvet Revolution.

The Kremlin and its affiliated media often manipulate the propaganda story of color revolutions when talking about demonstrations in neighboring countries. The main thesis of this story is that the demonstrations against the government in different countries are not carried out by dissatisfied citizens, but by “outside forces” who finance some agents inside.

This story about the color revolutions was voiced by “Комсомольская правда,” a separate portion of the one-hour program was dedicated to Armenia.

? The KP repeated the usual propaganda theses about “outside” forces, and pro-government commentator Stanislav Tarasov (whose interviews often appear on the Armenian 168.am website) stated that the Velvet Revolution was planned by the Armenian community in the United States, that  Pashinyan and Sargsyan had come to a preliminary agreement, and that now a dictatorship is being established in Armenia.

The story of color revolutions was also used by the Azerbaijani propaganda machine.

? One of the Belarusian correspondents of the Russian state agency Sputnik told the Azerbaijani press that Azerbaijan and Belarus have strong leaders, they were able to “resist” the color revolution, but Armenia was not.

The Armenian 1or.am website wrote that Arsen Torosyan is campaigning against the Russian vaccine. This article was reproduced by the Russian website Eadaily.com. Both media outlets assumed that Torosyan had ties to international organizations and that he would bring another vaccine to Armenia “with some kind of plan.”

These publications did not take into account that the development of the Russian vaccine is not over yet.

On August 11, Vladimir Putin announced that Russia was the first in the world to register the coronavirus vaccine. According to Putin, the vaccine is effective, his daughter was among those who received it.

❌ Putin was wrong: “Sputnik-V” was not the first registered vaccine, China received its vaccine registration in June. Both of these drugs are not for the general population, they will be tested on some limited groups․ In China, the military, in Russia, doctors and teachers.

In other words, the tests of the Russian vaccine, in fact, are not over. Other manufacturers are ahead of Russia. For example, the Moderna company founded by Nubar Afeyan had started the final stage of testing earlier.

Соловьёв LIVE YouTube channel once again criticized post-revolutionary Armenia. This channel was founded by one of the most famous figures of Russian propaganda, Vladimir Solovyov. The channel has referred to Armenia several times in recent months, spreading manipulative allegations.

In August, another host of the YouTube channel, former State Duma deputy Semyon Baghdasarov, dedicated separate excerpts to Armenia in two issues of his program  Смерш (1, 2).

In both cases, Baghdasarov’s claims were almost the same. He manipulated the conspiracy theory that had been repeatedly denied about George Soros, claiming that Pashinyan’s government was “Soros-backed.” Besides, Baghdasarov often remembered historical figures, the glorious past of Armenia and his Armenian ancestors.

Like another well-known representative of the Russian propaganda system, Margarita Simonyan, Baghdasarov contrasted the greatness of his ancestors to the current “anti-Russian” government of Armenia.

? Baghdasarov stated that Pashinyan wanted to remove the 102nd Russian military base from Armenia but then realized that Turkey was a dangerous country and that Russia was the only hope to defend it from that crisis. He also resented the fact that Russian channels in Armenia are “blocked,” transferred to cable broadcasting, and that Armenian television shows the Russian opposition Alexei Navalny. 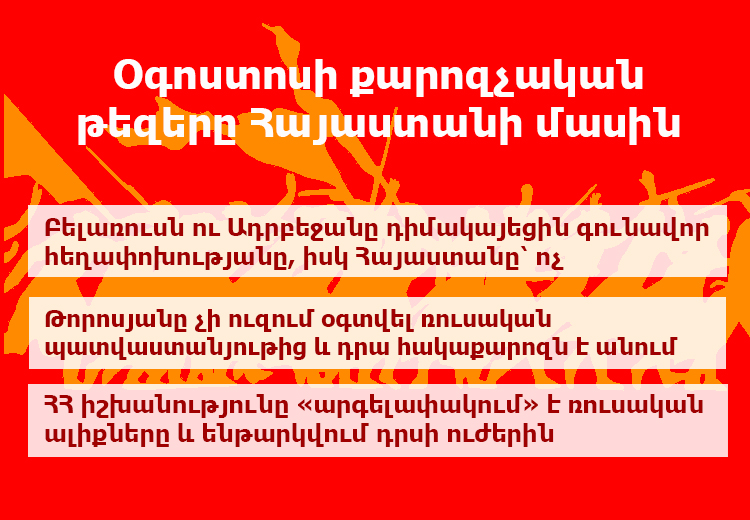 Armenia and Artsakh denied the rumors spread in the Russian press

❌ The Defense Ministry spokesman denied the information published by the Russian Avia.pro website that the Turkish F-16 planes had approached the Armenian border. The information was spread by other Russian media outlets as well: Lenta.ru, Dialogorg.ru, etc.

❌ The Artsakh Foreign Ministry denied the news spread by Topwar.ru that it had told Foreign Minister Masis Mailyan that Armenia would withdraw its Russian military forces from its territory if Russia did not provide assistance. The Russian website referred to the Polish Defense24.pl periodical, but in the Polish article these words are not said by Mailyan, but by a retired military man. Topwar.ru later removed the publication.