While coronavirus infections are registered in Armenia, the media and politicians continue to spread myths about masks and vaccinations. At the same time, the followers of conspiracy theories are trying to circumvent Facebook controls.

In recent days, Channel 5 has prepared several reports on masks, which contained false or manipulative allegations with the same content. For example, the leader of the “One Armenia” party Arthur Ghazinyan claimed on Channel 5 that “there is no scientific evidence, there is no one in the world that the mask somehow saves, frees from or inhibits the spread of the virus.

❌ This statement is false: Health experts generally agree that mass wearing of masks, along with social distancing and hand washing, helps to slow the spread of the virus.

Along with Ghazinyan’s claims, the host of Channel 5 announced that “after wearing the mask outside for about 20 minutes, the oxygen content in the blood drops from 100 to 92.”

❌ This is also a false claim: Medical masks do not interfere with breathing and do not cause oxygen starvation. Both now and before the onset of the epidemic, many health care providers wear masks, often for hours at a time.

The report of the 5th channel, which contains false allegations is only one example of the anti-mask movement that has gained new momentum in recent days. Not only the 5th Channel, but also Yerevan.Today, Hayeli.am, ArmNews TV, and Tert.am spoke about the invented dangers of masks at the end of July. All these news outlets are connected with the former ruling politicians or the party.

Some politicians were also against the masks. Former NA deputy Vahan Babayan and former member of Yerevan Council Sona Aghekyan.

Both politicians and media outlets affiliated with politicians made the same false claims that wearing a mask in an open area or in a car is useless and even harmful to health.

There were also opinions outside the political struggle against the masks. Thus, Boris Navasardyan, the president of the Yerevan Press Club, did not see the need to wear a mask in a car in open areas.

Doctors distributing CoronaMyths are once again announced the end of the epidemic, insisting that it is not a coronavirus, that we are being infected with Ebola

Dr. Hayk Manasyan stated that the epidemic momentum has dropped in Armenia. The number of cases has decreased from 10,500 to 9,900, “so what is there to poke at?”

Manasyan has been regularly announcing the end of the epidemic for some time now. Moreover, he has previously spread false allegations and conspiracy theories about the coronavirus.

Another doctor, Marina Khachatryan, a former member of the Yerevan Council, stated that “Ebola has spread under the name of coronavirus.” Khachatryan did not comment on who spread Ebola and why.

There was no shortage of conspiracy theories about vaccines

In addition to the political action to renounce protective masks, the media also covered vaccination campaigns.

? A Russian video containing conspiracy theories about vaccines with an Armenian preface was spread on the Internet. This video was accompanied by the hashtags “NoToVaccines” and “DontWearMasks.”

? Dr. Hayk Manasyan did not deny the benefits of vaccines, but wanted there to be no innovative vaccines: let there be the old ones, which have been cultivated for decades.

Manasyan’s statements are especially interesting because he mixes right and wrong, making misleading statements as a result. For example, he stated that he did not believe in conspiracy theories, but immediately repeated the well-known conspiracy theory․ All this is done to prepare the grounds for “bringing in the vaccine.”

In a Facebook post with more than 100,000 views, Manasyan also suspected that the vaccines were not so new. Maybe they existed long ago, but now they are being “liquidated.”

The new type of vaccine, the possible dangers of which are discussed by Manasyan, was created by Moderna, a company founded by Armenian businessman Nubar Afeyan, which is one of the leading companies developing vaccines against Covid-19. The Moderna vaccine is really innovative, it was ready in the winter. Clinical trials are underway. Detailed information about this vaccine can be found here.

Conspiracy theorists, in turn, try to circumvent this control. Thus, the “Coronavirus = affair of the century” Facebook page posted the Armenian translation of a video that became known all over the world, in which there were many false claims about the epidemic. According to the page, the video received more than 100,000 views, although “Coronavirus = affair of the century” has only 4,400 followers. 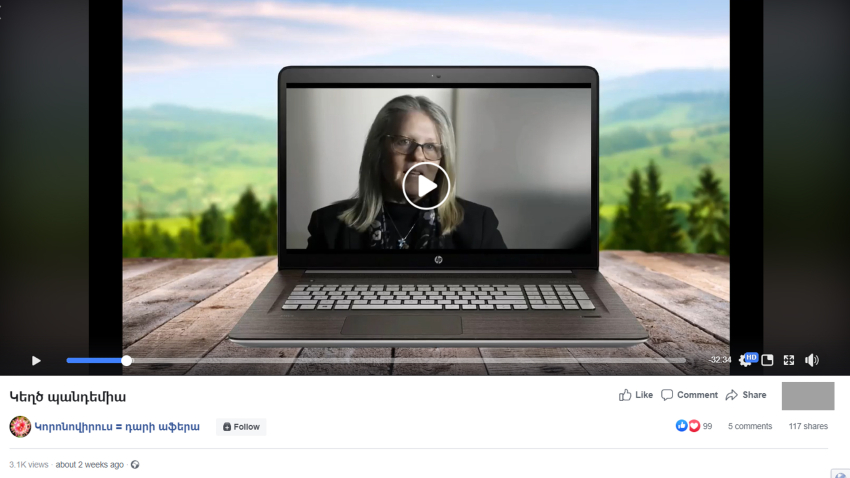 This publication of the page was mentioned in the international press.

After the video was removed by Facebook, the page re-posted it, edited the photo, so that the social network algorithm would not recognize the video.

Other videos about conspiracy theories are posted in the same way.