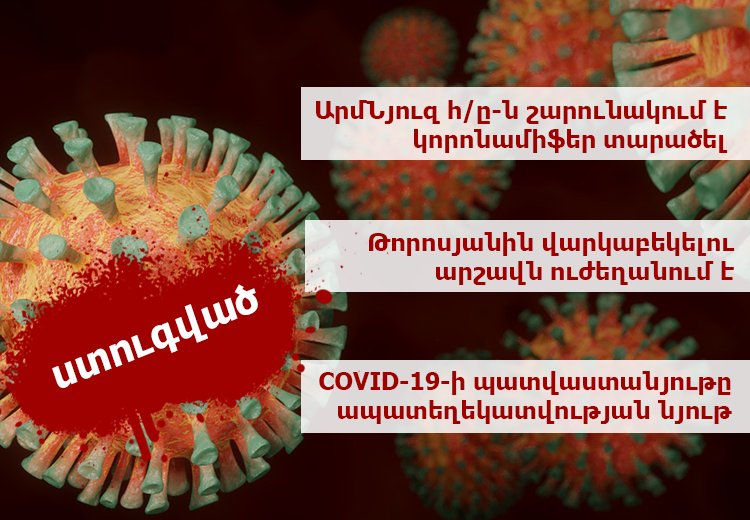 Media.am presents the misinformation and conspiracy theories that were spread last week about the epidemic.

The anti-vaccine campaign continued last week. On this occasion, in the context of the situation created by the epidemic, the Minister of Health Arsen Torosyan was targeted for his religious views and political sympathies. He was accused of corruption.

Angela Tovmasyan made a statement without mentioning sources

The “In Front of the Mirror” program broadcast on “ArmNews” TV continues to spread misinformation about the epidemic.

On July 8, Angela Tovmasyan, the author of the program “In Front of the Mirror,” was in front of the guests in this case. Recalling the case of confusion of the corpse of a person who died of coronavirus, without mentioning a factual source, Tovmasyan, the head of the interview, news website and press club, stated that the famous case is not the only one.

“There was another such case, but fortunately, I don’t know why, those relatives decided to open and saw that it was not their relative. And when they tried to return it, they were told there, ‘what a big noise you are making, what difference does it make if he is there or here,’” said Tovmasyan (in the video from 5:40).

The former director of “Masis” NGO also manipulated the topic of the corpse in a conversation with Livenews.am. “The loss of the grandmother’s corpse proves that they do not treat corpses normally. Corpses are treated as medical waste,” said Nune Nersisyan (in the video from 25:12).

The vaccines have not been tested

Referring to Gohar Jrbashyan, a specialist in Demography and Health Policy, the journalist said in an evening news report on ArmNews TV that the vaccine must be pre-tested on animals, but none of the COVID-19 vaccines have been tested (16:27 in the video).

❌ This is a false claim. The World Health Organization released the picture of potential vaccines on July 6. According to available data, 21 of them are in the clinical trial phase, 139 in the preliminary trial phase.

The process of discrediting Torosyan is underway

Taking advantage of the situation created by the epidemic in Armenia, the opposition continues to label the Minister of Health Arsen Torosyan and accuse him of a number of issues.

📌 In an interview with Livenews.am, Dr. Nune Nersisyan, in addition to insisting that Torosyan had not done anything good and that he was not doing well, targeted him for his religious views. “A man who is a Soros supporter, a man who is an atheist,” said Nersisyan, contrasting being an atheist with the image of an Armenian (in the video from 29:28).

📌 Calling COVID-19 “Covig-19” (possibly by mistake) irates.am wrote under the headline “They say” in its gossip section “… that Nikol Pashinyan will never dismiss Minister of Health Arsen Torosyan, even if the latter drives the whole Armenian nation to the scaffold.”

In order to prove what it wrote, the website not only labeled Torosyan “LTP’s soul child,” but also explained his “immunity” with a conspiracy theory. “In Armenia, he is implementing the health programs of the globalists-Sorosians, including the Covig-19 vaccine-related programs that have not yet entered into force.”

📌 This same conspiracy thesis appeared in the “5th channel.” Weeks ago, film producer Armen Grigoryan, who accused the government of “making money on people’s deaths,” continued to develop his thesis.

In the pavilion of the “Diary” program, he said that “Gavi” and the Gates Foundation “invites” the ministers of health to third countries, keeps them in a good hotel, and gives them gifts, for example, in the form of a watch. “Bill Gates must bring back his money. That’s it, it’s over. Do what you want. Now he will return the money by vaccination, selling the antiviral drug to us,” Grigoryan said (in the video from 10:16).

It is true that Arsen Torosyan is a member of the board of the Gavi Global Vaccine Alliance, and the Bill Gates Foundation has funded the development of a coronavirus vaccine. However, the return of money invested in the expensive hotels and the gifts famous to Grigoryan through vaccines and drugs is from the field of conspiracy theories.

📌 Petros Ananikyan, the co-founder of the National Council for Strategic Reforms, manipulated Torosyan’s words in a conversation with 168 TV. He said that the minister allowed himself an expression unworthy of a doctor, “he is proud of our deaths.” Explained: “You can’t be proud of even one death, it’s human life.”

In an interview with Public TV, Torosyan was proud not of the deaths, but of the good index of the death toll from the coronavirus per 1 million inhabitants. “We have been able to develop our health potential so much that we have such good indicators. And I am proud that we have such good indicators,” the minister said (in the video from 5:29 minutes).

Everything is over, the rest is for vaccinations

Dr. Hayk Manasyan puts forward the thesis that everything is over. However, he does not explain what changes have taken place during this period that has led him to such a conclusion. Instead, he is developing his anti-mask campaign by linking it to vaccines.

📌 Manasyan asked a question in a Facebook post, “Have you decided that we can return to normal life even tomorrow?” It is enough for the Commandant to announce today that putting on masks is pointless.”

And already live, in response to the audience’s question, he said that the epidemic is partly a health and partly a political issue: “It gives me the impression that you have to be patient, there will be a vaccine. And by using the vaccine, they try to keep people away from the idea of immunization in a natural way.” – In the video 17:39 minutes).

📌 Manasyan wrote about the connection between masks and vaccines on July 7. He explained, “In my opinion, the masks are a political decision and are aimed at solving political issues, starting with the illegal extension of the state of emergency and creating a market demand for the non-existent vaccine.”