False And Denied News Between June 1-15 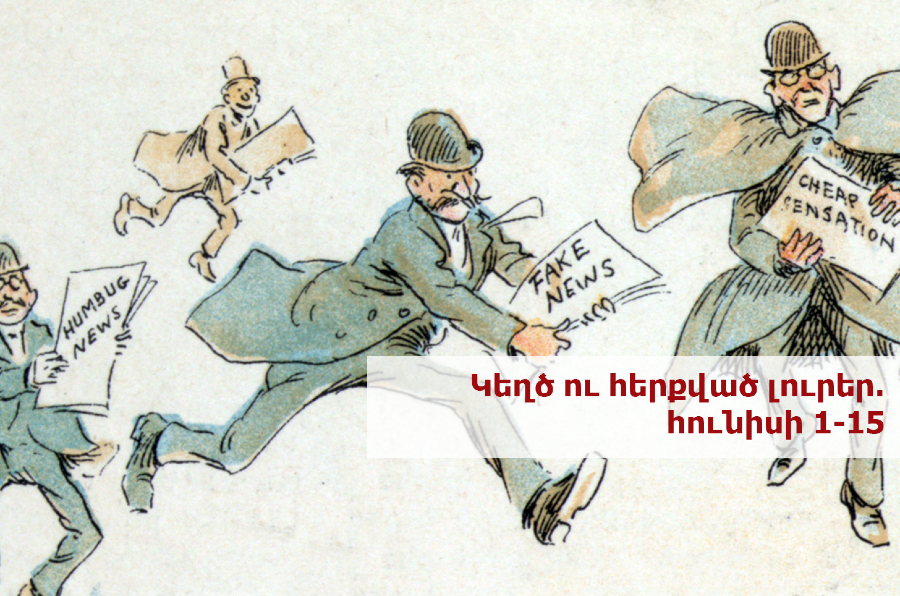 In early June, the press circulated false rumors about the Prime Minister’s luxurious mansion and propaganda theses about the National Center For Disease Control and Prevention. The death toll from the coronavirus leaked, and a torrent of false or misleading rumors about the contagion continued.

The propaganda thesis about biological laboratories was voiced again, this time on ArmNews

Political analyst Sergey Shakaryants expressed concern over the biological laboratories operating in Armenia on ArmNews. We are talking about the National Center for Disease Control and Prevention, which analyzes the coronavirus diagnosis and epidemiological situation. The NCDCP, which received funding from the United States, is often the subject of Russian propaganda theses.

Shakaryants said that Iran and China are also very concerned about laboratories and suggested opening Russian or Iranian laboratories instead.

Touching upon the Artsakh issue, Shakaryants expressed an opinion that belligerent statements from Armenia to Azerbaijan are not answered, as the government is “Turkish-loving.” “Today’s government is dying, it wants to hand over the territories.”

On June 4, the Facebook page “Zndan” wrote that Tatevik Revazian was a member of the Turkish-Azerbaijani agency network operating in Armenia and received 12 million euros “for the demolition of the RA civil aviation.”

This post was accompanied by an edited picture, where the Turkish flag and a joint picture of Erdogan and Aliev were added to Revazian’s background. This post was shared about 450 times.

A few days before the post about Revazian, an information leak was organized through this page, a list of people who had died from the coronavirus was published.

And in November of last year, screenshots of Styopa Safaryan’s correspondence were posted on this page.

The page “Zndan’ was opened in 2019, it has about 800 followers. It is coordinated by an account located in Russia.

By the way, another leak occurred in early June, the data of patients with coronavirus was published by Azerbaijani hackers.

Facebook user Armen Petrosyan, who is considered to be close to Mikael Minasyan, posted a picture of a private house on June 11 and wrote that “according to the news hanging in the air” it was Nikol Pashinyan’s house in Canada for the price of $3 million.

The “fact-checking platform” found out that the owners of the private house have nothing to do with Pashinyan. Moreover, the mansion was not even in Canada, but in the United States.

Sona Aghekyan was joking, the press was re-printing

Former member of the Yerevan Council, Sona Aghekyan, wrote on her Facebook page that she was infected with the coronavirus.

The post was reprinted by a number of news outlets: 24news.am, medialab.am, armdaily.am.

However, in the comments under the same post, Aghekyan stated that she was “joking,” in fact, she is not sick.

Over the past two weeks, a variety of conspiracy theories about the coronavirus have continued to spread, from a contagion staged during the Olympic Games to the infection spreading via tests.

There was also news about the unproven effectiveness of treatment measures. 1in.am host Gohar Hayrapetyan wrote that the so-called “Health Tone” remedy will help to avoid infection. The Nork Infectious Diseases Hospital denied the allegations, saying it was a dietary supplement and could not be used as a medicine to fight coronavirus.

Analitik.am website published a story of a woman from Ararat who is not receiving medical treatment, although she has all the symptoms of the virus. Media.am found out that the news is false, and the journalist fabricated the conversation with the mentioned woman.

?In the first half of June, two lawsuits were filed against former Armenian Ambassador to the Vatican, Serzh Sargsyan’s son-in-law, Mikael Minasyan.

First, on June 1, Minasyan was sued by Prime Minister’s wife Anna Hakobyan and her brother, MP Hrachya Hakobyan. The reason was Minasyan’s statement that the Hakobyans were involved in the smuggling of cigarettes.

They demanded that Minasyan publicly apologize, refute the defamatory statement and compensate the damage caused to the business’ reputation with 2 million AMD.

On June 5, MP Nikol Pashinyan’s nephew Sipan Pashinyan filed a lawsuit against the former ambassador. He demanded a refutation of the defamatory information and compensation of 2 million AMD. Minasyan’s same statement about smuggled cigarettes became the reason for the lawsuit.

? The Prime Minister’s Chief of Staff, Eduard Aghajanyan, demanded that 168.am deny the news about his participation in a party.

168.am wrote that in the conditions of a tense epidemic situation, Aghajanyan organized a party in the club belonging to him, which he threw until dawn. The website published the news with reference to an anonymous source.

❌ The Prime Minister’s Spokeswoman, Mane Ghorgyan, and ANC Spokesman, Arman Musinyan, denied the news spread by Pastinfo about the meeting between Pashinyan and Ter-Petrosyan.

❌ The Minister of High Technological Industry Hakob Arshakyan denied the news that he was accompanied by an armed person during his visit to HayPost. Arshakyan mentioned that the escort was not an employee of the ministry, but an employee of “Haypost” “Special Funds Transport Service.” Employees of that service have the right to bear arms.