From the Archives: Photos of 1999 Armenian Parliament Shooting 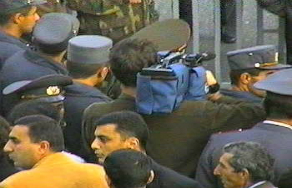 Coverage of the Oct. 27, 1999 Armenian parliament shooting was a real test for Armenian newsrooms of the time. There were several American, European, and Russian camera crews and correspondents in Yerevan during those days.

[[wysiwyg_imageupload:503:]]There were few TV stations. Among news outlets, there was strong competition between two major television news programs: the state-run H1 channel’s Haylur program and the private A1+ channel’s Ayb-Fe.  In the first few hours of the terrorist act, Ayb-Fe’s team was working in almost continuous live broadcast mode, while its main competitor was not actively reporting on events the first day.

And though the print press likewise worked day and night, coverage of the Oct. 27, 1999 events is remembered first and foremost by the work of A1+. [[wysiwyg_imageupload:504:]]

At that time in Armenia, websites delivering online news were sporadic. Internews Media Support NGO (currently the Media Initiatives Center) prepared a special online project about the events of Oct. 27, 1999.

At that time, not only was uploading a video online technically difficult, but also slow internet connection speeds didn’t allow for streaming or downloading video content. For this reason, the main part of the project included video stills. Furthermore, the sizes of the photos are small so that internet users with slow or poor connection speeds would still be able to view the photos.

Here are stills that were shot 14 years ago.