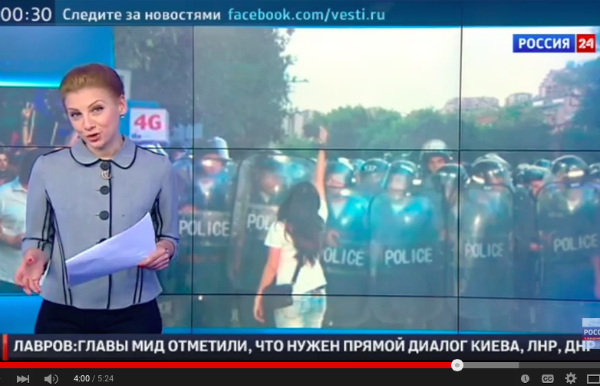 But in Armenia they tolerate that dinosaur and have become very close with it, since the main Russian TV channels are broadcast unobstructed throughout the entire country, and for some segments of society, watching the news supplied by Russia is something of a ritual.

News outlets enjoying Russian state support covered the protests that have begin going on for a few days in Yerevan against the electricity price hike and the attacks against demonstrators with a flexibility particular to dinosaurs. By dragging and creaking.

When REN TV on June 22 informed [RU] its audience (and also us, in Armenia) that the US State Department might be behind the demonstrations, since Armenia is receiving special support from a training center for protestors in the Czech Republic where the Americans want to incite a second Ukrainian Maydan, it seemed so staged and fabricated at first glance that it even evoked a smile.

On the same day, the pillar of Russian state propaganda, the state Rossiya (Russia) channel, in its Vesti news broadcast said [RU] with confidence that Armenia’s police was forced to resort to violence because sit-in participants “were armed with knives, clubs, brass knuckles, and metal rods.” And in general, according to the author, if this isn’t yet a Ukrainian Maydan, it’s very close.

Vesti again produced a reportage [RU] where it stressed that “police officers were forced to disperse demonstrators with water cannons after the enraged crowd attempted to attack members of the police.” It also mentioned that “those disposed to being more radical were detained.”

Added to the justification of police actions, of course, was the search for an American footprint. It was said that trying to rile demonstrators are NGOs, the majority of which live off American grants.

It’s interesting that, as the TV presenter claims, on the road leading from Liberty Square to Baghramyan Avenue are “the embassies of key  European countries” (probably Syria and China are “key European” countries for Rossiya).

The Russian media doesn’t hide the fact that its audience are foreign powers (often, hazy). And it presents the protest that arose on Yerevan’s streets and the use of force by police as a provocation organized by foreign powers, directed against Russia.

In this lengthy Russia-24 news channel reportage [RU], for example, the connection between the US and the Yerevan demonstrations was at once confirmed: according to a secret conspiracy theory, examples of American support were dug up (for some reason, they remembered that the Armenian National Congress has an office in Los Angeles).

Also reported was that it was a US company that purchased the Vorotan Hydro Cascade complex — so it’s clear what goals the foreign powers encouraging demonstrators are pursuing (one get the impression that even if it’s not clear, that’s of secondary importance; what’s important is the passion of what is said).

Nothing was said in the “responsible” Russian reports about the actual reason for the demonstrations or about Russian assets in the country, since this isn’t journalism but pure propaganda.

“Watch these scenes carefully,” articulates the knowledgeable TV host. “Did you see?” In the scene are young people resisting the water jets from water cannons. The host says they are sitting shoulder-to-shoulder but keeping their arms raised high, so they can film what’s happening on their mobile phones. They need to do this… for reporting, which, apparently, foreign powers require of them.

We can forget about logic: what is primary in these reportages produced with a dinosaur’s grace is the belief that Russia is threatened on all sides and that Russia resists.

Zvezda TV warned [RU] its audience that what happened in Egypt and Ukraine proves that Yerevan’s peaceful demonstrations can turn into bloody massacres. Again recalled were Maydan and its victims. Again, the foreign threat.

A question arises: why does Russia need this?

Perhaps now is the moment when this is question is already an anachronism. The Russian media works like a well-oiled propaganda machine that is programmed to eradicate anything that is anti-Russian — and first it creates that “anti-Russian” then attacks.

This is a trend for domestic consumption: the entire world is against Russia, but Russia doesn’t tolerate this and gets up from its knees.

Russian media places Armenia and its civic and economic rebellion in this trend. And it makes no sense to get angry or surprised; the reality is transformed beyond recognition. 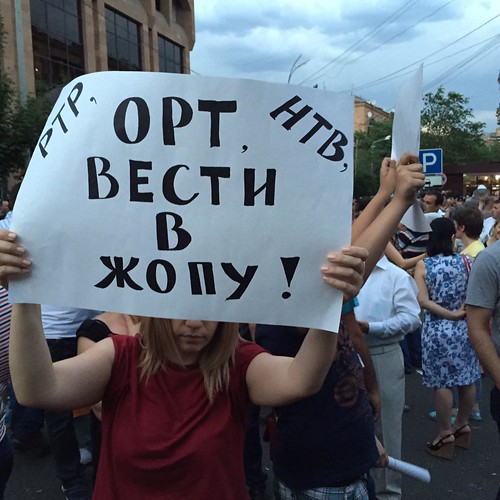 Being familiar with the work of Russian propaganda media, we can assume that when the No to Plunder movement spreads and gathers greater momentum, the Russian media field that has broad coverage might call the demonstrators (and Armenians, in general) “fascists” and “people who dance to the tune of Gay Europe’s or America’s duduk”. And finally, the most painful weapon will be used — the Nagorno-Karabakh factor. Already there are hints that if “anti-Russian” demonstrations continue in Armenia, Karabakh will remain defenseless.

And there’s no point in trying to understand why they are “anti-Russian”.

Partial truth information, which assumes pathetic and hysterical shades in the Russian newsfeed, indeed resembles a dinosaur. Dinosaurs prey slowly and digest information late. The result are piles of indigested information in the media.

And now it seems the time has come when we can ignore Russian propaganda media without regret, just as dinosaurs, which have become extinct, have faded into oblivion.