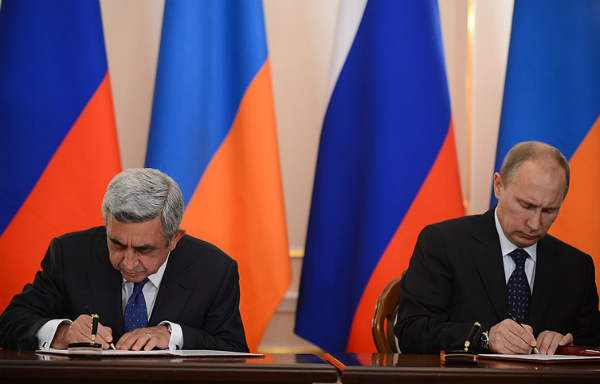 The joint statement issued by the presidents of Armenia and Russia following their September 3 meeting in Moscow had the effect of an information bomb, as it turned out that Armenia intends to enter the Customs Union, and subsequently to participate in the formation of the Eurasian Economic Union.

And though the Armenian presidential apparatus had not yet published any official document in Armenian, the Armenian media quickly began to translate the text of this critical statement, with various qualifying remarks (Sargsyan “intends”, “has decided”, “expressed an interest”, while Putin “welcomed”, “expressed willingness to support”, “supported”, “concurred”).

The Armenian president’s official website was silent for several hours. Also silent were Armenian officials (many were perplexed and preferred to avoid questions); instead, angry comments and pessimistic assumptions were made on social networking sites.

The idea of linking Armenia’s future with the Customs Union (the members of which are Russia, Belarus, and Kazakhstan — countries that don’t have a common border with Armenia) was perhaps long in the air, but its rapid and spontaneous execution caused shockwaves.

The public wanted to know about possible developments: it was particularly important to understand whether Armenia had lost the opportunity to join the Deep and Comprehensive Free Trade Area (DCFTA) and the EU Association Agreement (of which the DCFTA is a part), expected to be initialed in two months. And how irreversible is the intention (the desire, the decision) to join the Customs Union?

These questions didn’t disappear even when Serzh Sargsyan’s explanation was made public. “This is a rational decision; this decision stems from Armenia’s national interests. This decision is not a rejection of our dialogue with European institutions,” he said.

In this situation many local news outlets (especially television) were forced to do some maneuvering. H1 (Armenia’s state broadcaster) began the main news broadcast from a distance: from various points discussed by the two presidents, from citing diplomatic documents, leaving the news of joining the Customs Union to the last few minutes of the extensive broadcast, presenting it as passing and ordinary news.

Other TV stations based their reports on Serzh Sargsyan’s remarks, thereby trying, it seems, to maintain an invulnerable and neutral position. Yerkir Media, in its report, stressed a few times “according to Serzh Sargsyan” and “in Serzh Sargsyan’s opinion,” maintaining demonstrable distance toward what happened.

ArmNews made the basis of its report the claim that though we’re joining the Customs Union, we’re continuing European dialogue.

Of course, everyone knows that television is the most dependent media in Armenia and expecting a more versatile and objective analysis from it is a fruitless task, but the main TV news programs were broadcast at a time when already many websites had obtained immediate comments from EU officials.

RFE/RL’s Armenian service, Azatutyun, had published an interview [AM] with German MEP and Chair of the European Parliament Committee on Foreign Affairs Elmar Brok, where he said it’s “not possible to be a full member both of the Customs Union and have an association agreement and free-trade-area agreement with the European Union”.

EU representatives have stressed that Armenia was pressured.

Now, when it’s clear that Armenia’s ruling authorities are becoming part of a new imperialistic policy, opinions emphasizing the benefits of this decision begun to appear more frequently in the local media, though six months ago Armenia’s prime minister had announced that joining the Customs Union was not expedient for Armenia. “It does not make sense for us,” he had said.

And since meanings change very quickly in Armenia, the media tries to adjust to an ambiguous situation, whereby it becomes necessary to justify authorities’ decisions.

The Russian media acted nearly the same way, when it disseminated the degrading images of Armenian national Hrachya Harutyunyan in a woman’s housecoat and slippers in a Russian courtroom. (Recall, Harutyunyan was accused of causing the death of 18 people and injuring others when the truck he was driving crashed into a bus outside Moscow.)

Sometimes making a decision is easier than justifying it.