A Story of Wrong Identity in War and Peace 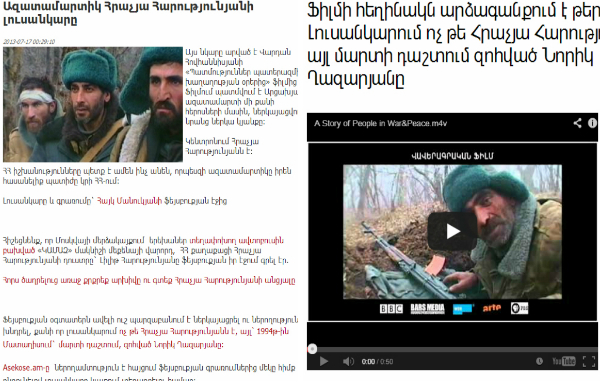 Two days ago, the Armenian Internet “found” the “exclusive” photo of 46-year-old Hrachya Harutyunyan, the driver of a truck that crashed into a commuter bus near Podolsk, Russia, killing 18 people. Apparently, the BBC produced a documentary film about the Nagorno-Karabakh War in which Hrachya appears.

Facebook was flooded with the film still of Hrachya. Comments were along the lines of aha, the freedom fighter; look, the BBC also noticed him. Social media users began to share the photo from a film that until the Podolsk bus accident was unknown to most. For the Armenian Internet, that image was the antithesis to the humiliation to which the accused had been subjected, appearing in a Moscow courtroom wearing a woman’s housecoat.

For an entire day, the compassion for Hrachya was fuelled by two “sources”: from the well-known photograph and from the severely unethical reports from Russian websites and Russia 1 TV network. Pouring cold water on that compassion from the Armenian side was Armenian TV personality Petros Ghazaryan, who described Hrachya Harutyunyan as a criminal, adding that even if he was wearing an undershirt and panties, Ghazaryan’s national pride wouldn’t be harmed.

When Ghazaryan was writing those words, the photograph in question hadn’t yet been in circulation. Despite this, Facebook users attacked the TV host. Even Football Federation of Armenia press secretary Arayik Manukyan countered Ghazaryan, as someone who already had the photo in his possession, with which he argued Kentron TV’s “not unfamiliar” representative’s “hypocritical conclusion”.

About the photo, GalaTV.am wrote: there, he is an epic hero, noble and bright. However, the photo accompanying the story is the one of Hrachya in women’s clothing sitting behind bars in the courtroom, though the article is about the still from the BBC film.

Finally, it became known that the photo from the BBC film is not, in fact, that of Hrachya. All tags were removed from Facebook. Local news websites published retractions, removing references to the photo published the previous day.

Asekose.am, however, was steadfast. On its website, the photo appeared below the headline “Freedom Fighter Hrachya Harutyunyan’s Photo,” along with the statement that the photo is from Vardan Hovhannisyan’s documentary A Story of People in War and Peace, followed by a statement that the photo is not that of Hrachya Harutyunyan and the website apologizes [for the previously published factual error]. Asekose.am was being sly: the retraction weakens the impression of the photo, but better that the headline stays — the retraction will become text supporting the photograph’s full description.

News sites plucked the story and the photo from Facebook, but it’s unclear who was the first to declare that it’s Hrachya Harutyunyan in the photo. According to Asekose.am, the first to post this on his Facebook page was Hayk Manukyan. The user, according to the news site, was led by Hrachya’s daughter’s statement “Before mocking my father, rifle through the archives and find his past”. And, boy, did they find it. Today, that photo is missing from Hayk’s Facebook page.

The first to uncover the true identity of the person depicted in the photo was the filmmaker himself. On July 17, Hovhannisyan wrote on his Facebook page [AM] that the person in the photo is not, in fact, Hrachya, but Norayr Ghazaryan, who died in the war.

The first to republish Hovhannisyan’s statement was Blognews.am, followed by Panorama.am. Everything fell into place. But, apparently, not for the print media. On July 17, Haykakan Zhamanak (“Armenian Times”) published the photo that fed compassion and national pride, in which the true identity of the person had already been revealed.

On the same day, a Facebook user asked Hrachya’s daughter to upload an old photo of her father from the war. The request remained unanswered for the entire day. Users then found a new target for their compassion and national pride — the man standing to the left of Norayr Ghazaryan in the photo, likening him to Hrachya. This likewise received no reaction [presumably from Hrachya’s daughter].

In my opinion, competition is to blame — the fear news outlets have of being left behind. No one wanted to be the first to doubt the validity of the claim. As a result, compassion for a man involved in a tragedy and the drive to help in some way became mixed up with inaccurate reporting — Hrachya, along with all his problems, has to “start from scratch” the difficult path of being a Nagorno-Karabakh War veteran.