Armenians as Portrayed on Russian Television 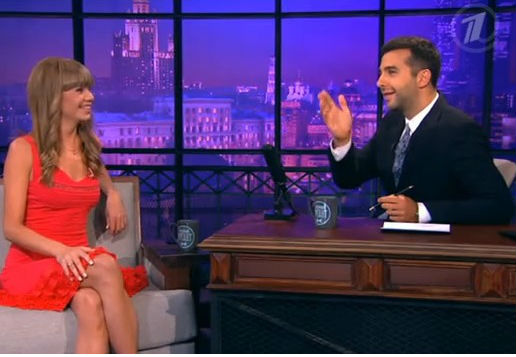 People in Armenia get quite jealous or enthusiastic over any attention to Armenia, Armenians, or Armenian-related topic on Russian television. Probably the syndrome that if a Russian refers to you on television it’s good is still alive and well. Put another way, the Periphery (in this case, Armenia) praises the attention of the Center (in this case, Russia).

Armenian-related references more often appear in the context of comedy, since the Armenian mark is more noticeable in mass, glamorous events and in comedy programs.

There’s an odd practice in place: Armenians either joke and mock well (take, for instance, Armenian entertainer Garik Martirosyan) or are gladly mocked themselves (mainly because of the cliché of being hot-blooded and having big noses). If the Center wants to see Armenians as hot-blooded, hospitable, womanizers, loud, and not burdened by intellect, well then that’s how we present ourselves.

An example to illustrate this phenomenon was evident on the June 5 broadcast of the Evening Urgant Show on Channel One Russia, which could also have been called “Armenians in the Kremlin”. The “reporter”, deliberately simple-minded and appearing like a naive blonde, had gone to the Tashir Award Ceremony and prepared a “sharp” reportage on the Armenian Music Awards.

Watching this reportage, an ordinary Russian TV viewer might grasp that Armenians are holding a song contest in Russia (naturally, where else?); there’s more of them in Moscow than in Armenia (naturally); they get their awards from Russians (who else?); and they like to run after barefooted blondes on stage, get them to drink brandy, and sing about Mount Ararat to the tune of a phone’s ringtone.

Actually, the format of such a “sharp” reportage contains interesting ironic elements: it allows the use of the “dumb blondes” stereotype, in order to convey things that are slightly more serious. It seems that coverage of corporate events in foolish and carefree ways is turned upside-down; that is, an opportunity is gained to appear smarter and thinking ahead than it seems at first sight.

But the Tashir Armenian Music Awards wasn’t that opportunity because a question arises: if we mock ourselves in a “provincial style”, what’s the point?

It also can be assumed that the idea to produce that reportage didn’t come out of thin air; the Evening Urgant Show hosted by Ivan Urgant has high audience ratings and is full of (paid) advertising reportages, announcements, and messages.