On April 9, the Day’s Heros were the Journalists 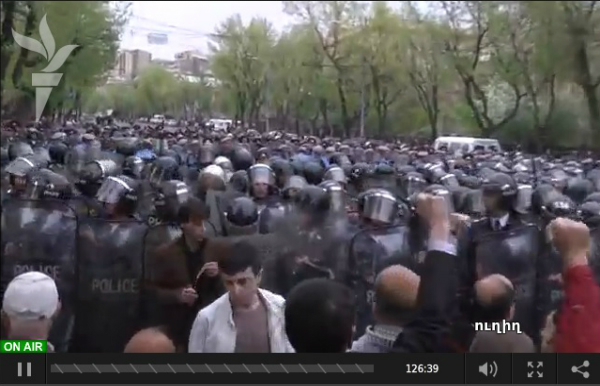 On April 9, Armenia’s news media worked under pressure and extreme conditions. In Yerevan in the afternoon, there were two events of public significance, the service of which rested on the shoulders of not only law enforcement, but also the news media. The details of two simultaneous presidential inaugurations (an official one and an alternative) attracted great public interest, with many following the day’s events in the local media.

All online news media having a multimedia section live streamed video or broadcast short video or photo reports from the Karen Demirchyan Sports and Concerts Complex, where, in a strictly official atmosphere and according to protocol, Serzh Sargsyan was sworn in for a second term as Armenia’s third president since independence. Reported in a similar fashion was the rally of opposition supporters gathered in Liberty Square, where presidential candidate Raffi Hovannisian held his own “inauguration.”

Perhaps this is one of those unique incidents where news about both the official and unofficial inaugurations was of interest to the public. It’s always interesting to follow what’s happening  simultaneously in different venues and how opposing events become visible.

Not only RFE/RL’s Armenian service (Azatutyun) and CivilNet TV, but also other news sites live streamed these two rituals (in their entirety or in part).

Armenia TV also had its own live stream online. The video footage of this TV station of large financial and technical capacities was free to use for not only its audience, but also other news outlets.

If during the first half of the day, news outlets were simply informing and broadcast, after the inauguration ceremonies, they became the main actors, since they had to be selective and respond quickly to developments. The situation in various corners of the city was changing quite rapidly, and there was a thirst for information, which local online news media quenched.

Speaking about Armenian media, I am obliged to separate television (with the exception of one or two stations) from the rest, which has taken a different route and offers not so much information as a fragment of information — a fragment that does not have great public demand and is long-winded, overly pathetic, and biased to the degree that it strangles TV viewers. And because of such lukewarm (lacking urgency, tepid) flows of information, television is losing its audience rapidly and irreversibly.

This became particularly noticeable during the second part of the day on Apr. 9, when spontaneous rallies, speeches, marches, and clashes with police happened around Yerevan. Much was unknown and unpredictable, and to understand what was going on it was necessary to get unedited, live broadcasted information from several locations almost simultaneously.

Partly paralyzed with its closed and blocked streets, Yerevan had become a platform for news-worthy events, which were quickly reflected in cyberspace. The day’s heros weren’t so much the political figures as the journalists. It was a day of running around, working tirelessly and intolerably, and using intuition and journalism skills.

Journalists were conveying information that was on location and not mediated (i.e. by phone or social networking sites). They were also competing with each other in imparting new and updated (though not always unbiased) information quickly. This refers to not only the demonstrations and clashes on the street, but also unofficially interviewing key members of the ruling party. It was a day of serious work.

On Apr. 10, the most valued was not only quickly dug up “fresh” news, but also material in news report format. There were discoveries by local journalists.

Coverage of the unpredictable development of mass events was a touchstone for all local news outlets (again, excluding television). And it became clear, the media outlet with the most professional journalists is the one that wins and gains an audience. Not all are able to work in conditions requiring rapid response (even when they are permitted).

The technical inadequacies of 2008 are no more — journalists working in online news media are equipped with mobile devices. And for them, yesterday was a real test: there were the tools and there was content. It only remained to work: to run after news-worthy information from morning till night, then edit and publish. Of course, there was disorder in the work of the media, but that disorder (if not more than that) also existed in reality.

The batteries of many journalists’ video and camera equipment had died by the evening. Needless to say, it was a busy day.

P.S. Following the online TV broadcasts, you sense how amazing live broadcasts are, and how attractive and impressive it is to be able to go live (even with technical and other difficulties). But traditional television in Armenia has long deprived itself of this pleasure. Some segments of the official presidential inauguration were even filmed the day before. This discovery was made by not only CivilNet, but also nature — on April 9 in Yerevan, there was rain and thunder.