The Image of Women in Armenian Media 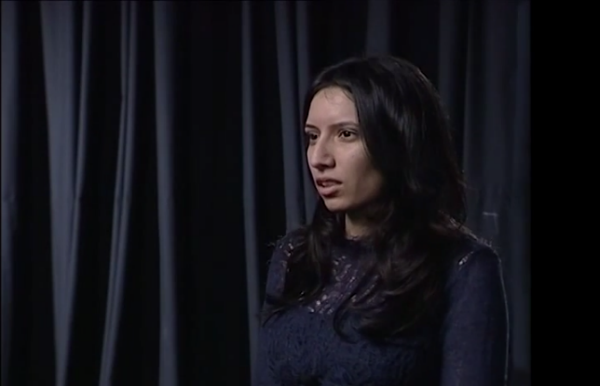 Television shapes behavior and outlook especially among teenagers and youths.

Several international research studies have shown that there is a direct link between aggressive youth behavior and television programming full of images of violence.

The media can shape and break stereotypes about people and phenomena. It’s very important to perceive and properly use the powerful influence the media has on shaping people’s thinking. Studying the media (advertising, films, journalism) is particularly important in terms of portraying men and women.

In these studies, every little detail is significant — how and in what social roles women or men are portrayed, including the physical position, clothing (or the lack of clothing), body language, gestures, voice, the content of what is said, and so on.

When we examine several problems in our country, such as, for example, women’s low involvement [AM] in the National Assembly and in other levels of government, or sex-selective abortion, we try on the way to solving these problems also to understand what sort of factor the perception of the role of women is.

Addressing issues of gender inequality, researchers and experts in the field often point out that the problem is not so much legal or systemic as it is social — tied to public perception (what behavior is expected from women or men).

Often, when we there is talk of the few women in politics, we hear the expression “Something impairs women”. That “something” can be described as distrust or the impact of social roles and expectations, which allocates a more passive public or political place to women. The shaping of such perceptions is often prompted by the media, with its different types.

NGOs in Armenia, the Yerevan State University, and independent researchers conducted several studies about the different branches of the media. Studies on advertising, soap operas, and the news particularly offered some important revelations.

In magazine ads and TV commercials, women rarely meet in work environments; instead, they are primarily depicted while shopping, cleaning, or having fun.

By presenting women this way, advertisers emphasize only women’s appearance and sexuality, ignoring human completeness and the diversity of women’s public roles and environments. It can be said that this way women are equated with things, objects, the main significance of which is their appearance and the beauty of their bodies.

Only 6% of women depicted in advertising are shown in their work environment. 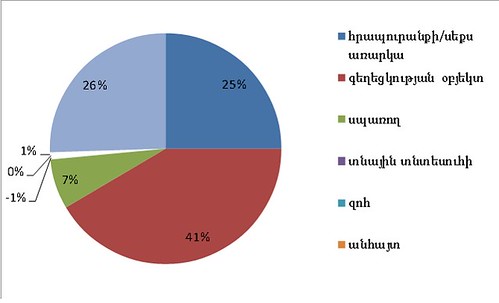 The image of women in magazine ads, according to “traditional advertising roles” 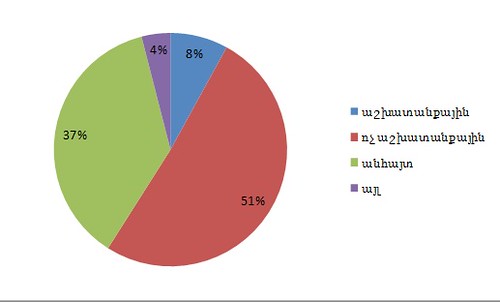 The image of women in magazine ads, according to “professional environment”

By the way, tyrannical behavior is characteristic of not only negative, but also positive characters. Those who abuse are not only family members, but also strangers, people of the same sex and different sex.

Women are depicted as needing the protection of men or as a part of a man’s world or “property,” the function of which is to satisfy their desires or care for them. This correlation is evident from the sound, body language, and physical states.

In 81% of the commercials studied, a man’s voice was used as the voice of authority; meanwhile, main female characters don’t speak at all in 81% of commercials.

This means that in TV commercials, women are mainly shown as “images”, “pictures” that seemingly don’t have anything to say, and are deprived of opinions and voice. At the same time, it’s the man who it seems always assumes the role of “speaker,” decision-maker, and truth-sayer.

In order to change the current situation, a more diverse depiction of women in the media is necessary — from the perspective of age, appearance, activity, and so on. In soap operas, for example, there is a lack of female characters who are strong, happy, secure, and have employment (manager, musician, analyst, and so on). Advertising needs to depict women at their place of work; for example, working at the office, instead of in the kitchen and at beauty salons.

News broadcasts include few female experts. The more active inclusion of female experts in TV programs, conversations, and news will lead to the public perceiving women as knowledgeable, as experts and professionals. Using the media’s influence and encouraging women’s involvement in government and economic sectors, it will be possible to completely use the potential of women and the public.

In order to obtain the aforementioned positive change, it is necessary to work several angles simultaneously: to shape public demand of the media and help media industry experts see the public impact of the images they create.

Public demand assumes the existence of educated media consumers who are able to see and evaluate the quality of the media and critically approach the stereotypes it presents. In different countries, teaching media literacy, for example, in the classroom is an effective step, in order for children — future adults — to view the media analytically.

Some steps are being taken to encourage the production and dissemination in the media of material that depicts more diverse gender roles (for example, the Na/Ne annual media awards or the news media competition organized by the Armenian UN Association). It is necessary to continue to work with journalists, including them in educational courses and discussions on research on the impact of the media.

It would be good to inform [those in the sector] about the laws regulating the sector — in particular, Article 8 of the Law on Advertising, which stipulates the appropriateness of advertising.

It’s necessary also to stimulate the activity of television programming and advertising regulatory bodies and commissions, in order to find solutions to problems in the sector.