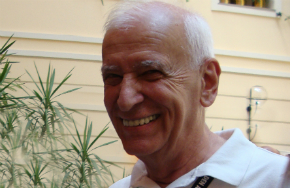 For 10 years we’ve been developing programs for the Golden Apricot Yerevan International Film Festival, and we always try to get support from the professional media industry.

To tell the truth, every year I yearn to have the opportunity to describe all the films and filmmakers individually and in great detail so that cinema-goers go to the screening not randomly (passing by, opting to come to the theater and watch a film), but by making a selection and knowing what awaits them.

Each of the films we bring to Yerevan is significant, and when I walk into the theatre and see that the viewing room is empty (as was the case in the beginning years of the festival), I feel unspeakable sorrow.

The preliminary information about a film or an event has to be great and detailed. Not only the quality of films, but also the way they’re presented and exhibited is important. In order to prepare and orient viewers, it’s necessary to tell a small story about the filmmaker or film. Let me say that we have the right to show certain segments (up to one minute) of the latest films.

It’s preferable that this information be aired on television. Though we collaborate with webtv.am, where we upload trailers of festival films, it’s not enough, since the online channels don’t have the coverage of traditional television — their audience is much smaller.

And traditional television, it seems, is not particularly interested in professional programs devoted to cinema. TV channels are more inclined to invite film industry people as guests, say, on their morning shows, which are entertaining in nature and don’t allow for a serious conversation about cinema. Or, the best case scenario, they cover film in news programs, which doesn’t get particular attention in the overall newsfeed.

Television, in the first place, is interested in information of an entertaining (and if successful, also scandalous) nature. It’s easier like that.

After all, to develop professional programs, first of all, professionals are needed. And, in my opinion, such professionals either don’t exist or are quite few in television. To tell the truth, the desire to build a bridge between the film festival and television, in the first place, must come from television.

Golden Apricot does its work, and the news outlet does its. After all, all the reputable TV stations of the world have journalists on staff who cover cinema. For example, all across the board in Russian TV channels there are film journalists, who work quite professionally.

I think a journalist writing about or preparing a media report on cinema, first of all, has to choose the right format. Say, in which journalism format is it better to present this news — interview? An announcement? A news story? In journalism, as in cinema, there are special rules related to genre or format, the violation of which is not advisable.

Of course, having a cinema critic–journalist on staff would be a great acquirement for a news outlet.

To be honest, I’m not worried about older and distinguished film critics not being included In television. Now, there are very interesting young people who know contemporary film and can present it. Older film critics are often ignorant of new films. And when you don’t watch new films, you become stagnated and hardened, and there comes a time that no matter what you watch, all the same, you won’t like it.

Both film and television are for the audience and in a broad sense also for the city. We are now doing everything for the 2013 festival films to be screened also in the Moskva Cinema’s outdoor hall. The film festival management is trying to prepare the hall, working mostly on improving the seats and furnishing a new entrance.

And the matter is not only about holding a summer film festival in a summer (outdoor) hall, but also that the outdoor hall is much larger (it has 800 seats) and the more spectacular films and those having mass appeal can be shown to as many people as possible.

Film is an interesting phenomenon: it changes very quickly while at the same time not changing at all. One thing is clear: when a film was made can be understood from its first few scenes. The filmmaker’s thinking and world view suggest the time period in which the film was shot.

Of course the rhythm has changed; the Internet has made us all inhabitants of — let me use the accepted term — the “global village.” We live in a large, global village where everyone knows each other. In film festivals, for example, are almost always the same faces, the same films…

But film is also an art having a surprisingly conservative resource. After all, film is a reality that is impressed on celluloid and then produced. At least in this extent, reality becomes the story.