“In A Big Sense, War Is The Gap Where All Emotions Are Accumulated And Compressed”

Journalist, film critic Karen Avetisyan found a very original and influential way of writing about the Armenian-Azerbaijani war. It is the intersection of journalism and authorial documentary, it is both emotional and documentary. It is a very authorial point of view, and because of that it is valuable or, of course, it is difficult to talk about the war and the author’s point of view, sometimes they contradict each other directly.

The small stories of the Great War, hidden under the author’s gaze, convey much more than one might expect from a social networking site (here and here).

Karen has been in Artsakh for a long time, preparing materials for “Sputnik Armenia,” he says that there was no lack of information about the war, but you realize the atmosphere and the widespread danger only when you are present at the scene. When at least you try not only to realize but also to feel the situation.

It is very difficult to choose the right angle and, most importantly, the right words to describe the war that has come to our doorsteps. How is this happening, especially in the social dimension?

I went to Artsakh just as a journalist, that is, to take pictures, talk to people, make audio or text.

But since it can be said that there was no lack of information, or rather, the news coverage was great, I tried to collect the dialogues, recordings, small scenes that do not seem to have a direct connection with the events, but at the same time are an event in their own right.

It is natural that now there is a state of war, there are restrictions that you have no right to violate. In addition, the ethical side is very sharp. There is that internal conflict in every journalist, the ethical questions that arise every day.

Short texts I write do not fall within the scope of what may or may not be allowed. They do not cause internal conflict, not even a small one.

I wanted to find a way to convey the image of the situation, but at the same time keep it so that it is not related to a specific time and narrative. In other words, it is not built on a sequence of actions – military, historical, etc.

In some cases, this image may be unbiased, abstract, and largely fabricated (or in this case, I did not invent anything, I wrote what I saw).

But it seems to me that this collection of episodes convey the situation however untimely. They can be read in any order, as the passages are not related to the specific course of the war. And they go beyond the two extremes: pathos, inspiring cries and panic, depression. I was trying to be between those two.

In a big sense, war is just that, the gaps where everything is accumulated, all human emotions are compressed, condensed at every point. And in terms of drama, unfortunately, this is the most interesting borderline reality that can be imagined. Everything is combined in the war, exaggerated, at the same time that exaggeration is real.

If in another situation it would be considered grotesque, war makes what is grotesque a documentary. 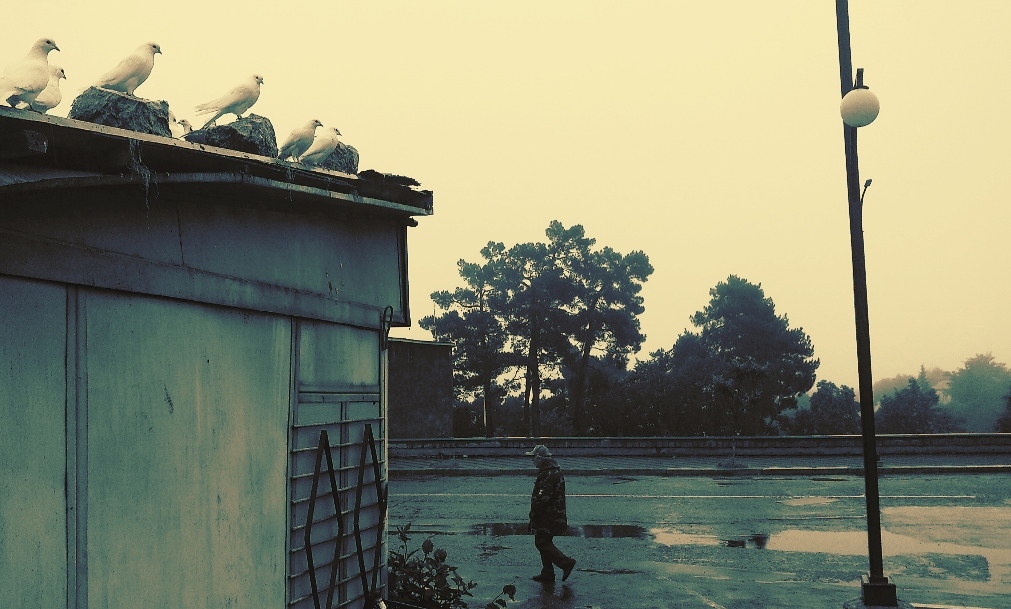 It seems that classical, textbook journalism is not very capable of conveying the reality of war. It helps to be aware, but it does not help to know, accept ourselves, get excited and appreciate. Emotions are not the helper of the newspaper. Is there a crisis in journalism?

I think journalism in general is in a crisis. But it is most felt when there is martial law. It seems that we are accustomed to the state of war, and we constantly come to an agreement in our mind that any photo, any word and phrase will follow the principle of non-harm. Non-harm is becoming a very specific requirement.

If before the war it seemed vague, now this principle has the true and terrible meaning. And that, of course, is psychologically stressful.

I do not know what journalism should do in the classical sense during a war, because in our country, for example, things come together at the genetic level. I’m not sure I can put it right, but I think that in the Armenian-Azerbaijani war, an Armenian cannot be just a classic, crystallized journalist. The same goes for the Azeris.

It is easier for foreigners. But here, too, other circumstances arise: not being involved in the context, the impossibility of considering the situation on an equal footing, and so on. There is a certain deadlock.

But it seems to me that a journalist should be flexible. Bend with the current situation. Accept that if the conditions are as they are, then you should get as much across as you can.

My essays are by no means journalism. They convey the atmosphere, but there is no urgent news or local clarity under it. Rather, they are patches that can be anywhere, for example in the Balkans or elsewhere. Strange as it may sound, they are about the universal atmosphere of war, even though we are authentic and we see ourselves in them.

I went to Artsakh because there was a goal to create a common database of photos, videos, and stories that could be used by various international media outlets if they were not physically there. When Stepanakert was shelled, very few people remained. And I had to take as many photos as I could to fill in the blanks. In addition, I did podcasts and short interviews.

Interestingly, even the content of the interviews turned out to be such that it did not matter who the speaker was.

For example, when I prepared the interviews and sent them to the editorial office, they always asked who the speaker was, where he said it, when he said it, in order to mention that information, but in reality, that information did not change anything.

The situation was unique, and all the people who just live and exist in that situation, they become unique, no matter who they are, what they do and where they do it. 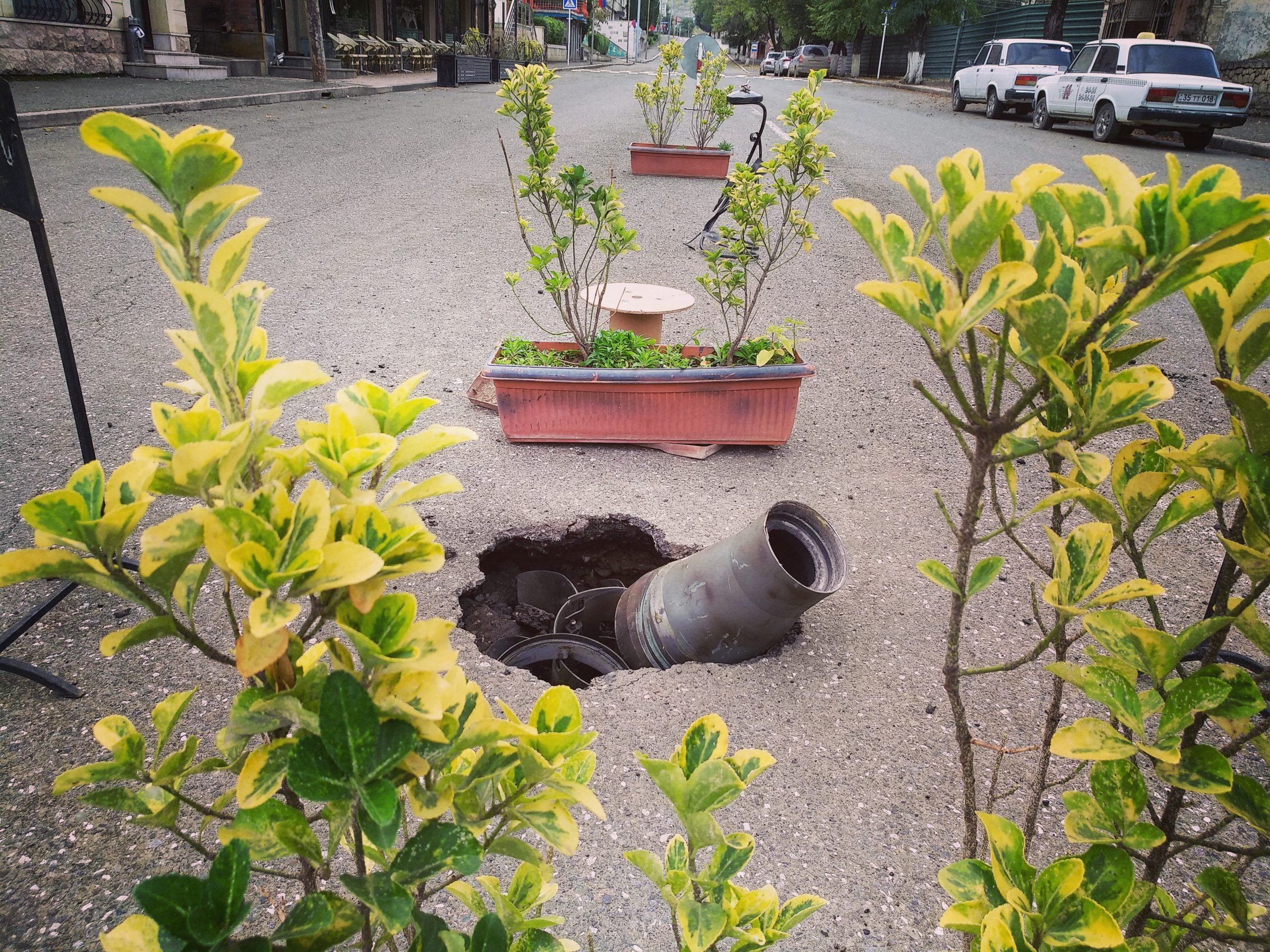 I know that you also had a lot of contact with international journalists. How did they feel about the situation?

First, everyone was very scared.

Moreover, there were many journalists who, unlike, say, me or other Armenian journalists, were specialized military journalists, they had been in different hot spots around the world, in Baghdad, Afrin, Donbas, etc.

But there was still a fear in Stepanakert, which was different, which they explained very well. There are zones of conflict and war in different regions that you can independently assess and manage.

That is, you decide how deep you will go, how seriously you will face the danger. Will you go to the front line or not, will you enter the shelled area or not? And in that sense, you control your own actions, guided by an instinct of self-defense.

And the uniqueness of the Artsakh war is that everything is a target.

Stepanakert was completely bombed, there was no way to predict what would happen next. You do not know from which side the next projectile will come, where it will explode.

In other words, the war zones were eliminated, at some point the concepts of the first, second, third and fourth lines became very relative. Being in Stepanakert for a short time became even more dangerous than the front line.

The city as a whole was a target. And many journalists were not ready for that, because they were accustomed to the fact that if there is a danger, one can go back a little, deviate in a safer direction, relax a little, think, breathe.

And now all the points were in the same danger, there was almost no safe point.

Of course, there were some journalists who tried to be in dangerous places. Such was WarGonzo (Semyon Pegov). Or Basque journalist Pablo Gonzalez, who, as soon as he heard the air alarm, did not enter the shelter like other journalists, but left the city. It was as if he was trying to overcome his fear. He was taking risks not to notice the risk. But it was, of course, an exaggerated working style.

I noticed something interesting. It was very difficult to stay away from events. When, for example, you find out that a Basque journalist came to Artsakh, you are involuntarily interested in him as a Basque who came from another conflict zone. Naturally, he has his sympathies.

The same was true, for example, of a Brazilian documentary filmmaker from Sao Paulo. He did not come simply to tell the truth cold-heartedly but as a representative of a Christian civilization. He aimed to be in all conflict zones where the Christian community and heritage are oppressed. He was looking for a religious component.

So many journalists came with their conscious position on writing or filming about Armenia and Artsakh, they chose the side. And the reason was not only that they could not go to Azerbaijan and collect material from there. 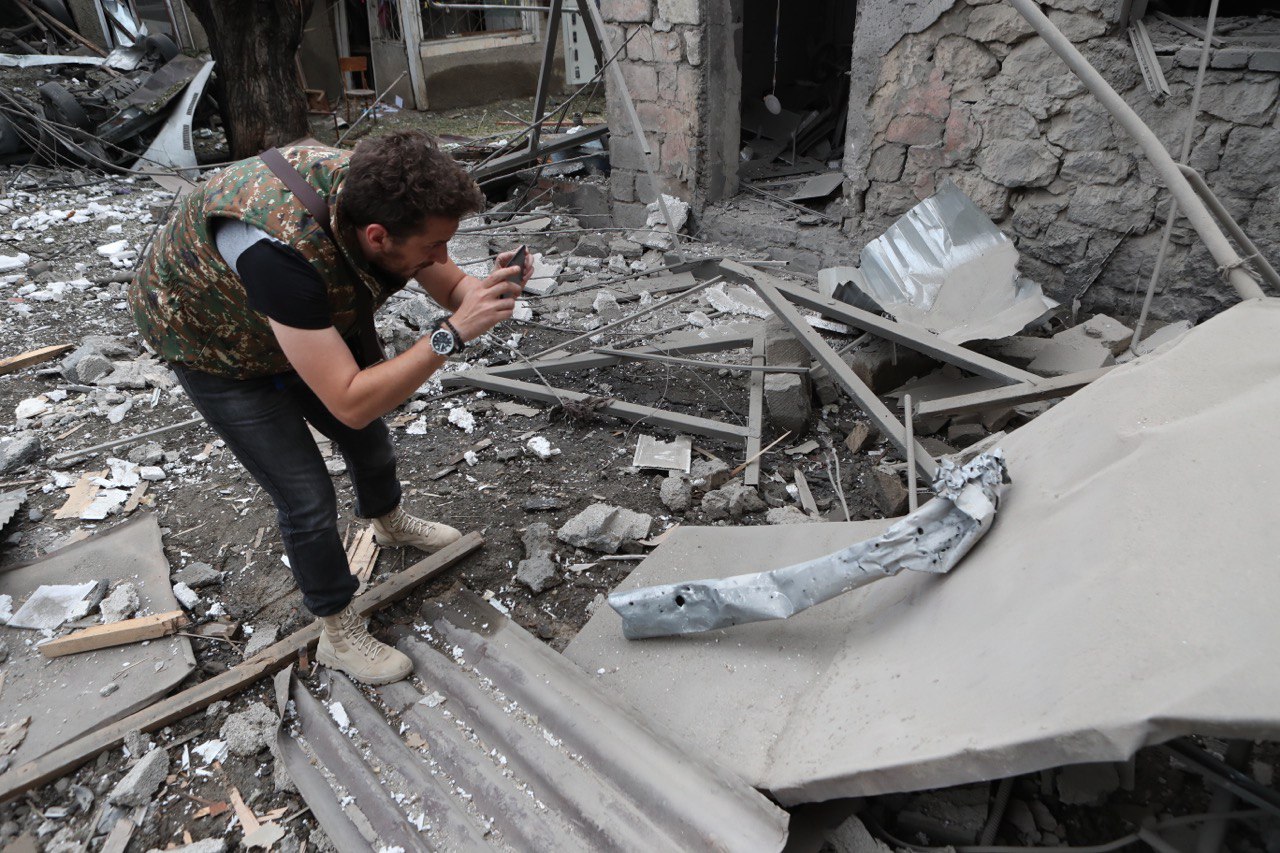 You stayed in Artsakh for a long time, what kept you there? It was definitely not just a professional job.

When you are there at this very dangerous time, you naturally ask yourself, well, why am I staying, what is the practical meaning of staying here?

My photos, my stories, by and large, become secondary; a very strange idea comes to the fore that you really want to share that universal danger with someone. Share with people who are at risk.

And while you are here, you get a small portion of your total risk, and maybe that reduces the risk a bit.

I agree that this sounds like an illogical explanation, but it is a very strong feeling.