The frontline is everywhere because we are under non-stop shelling 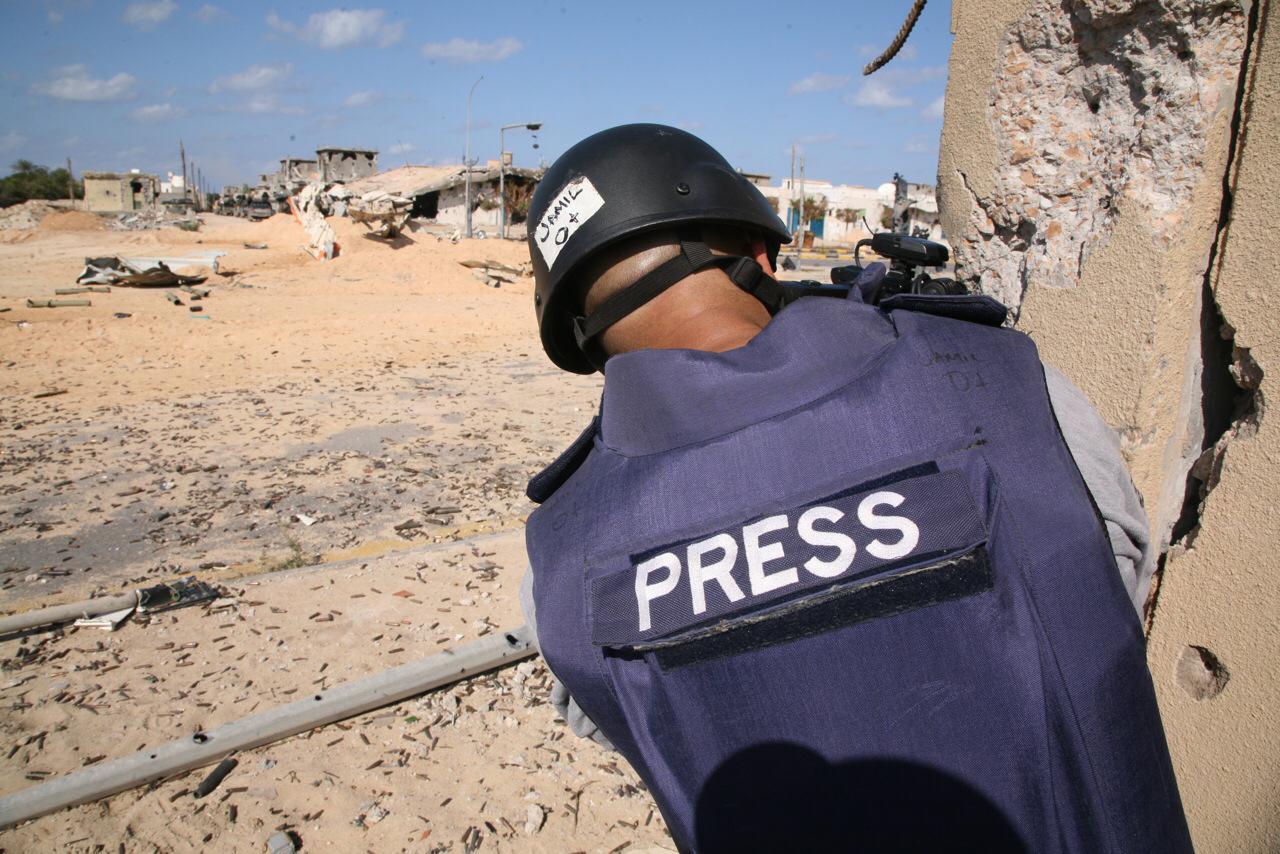 Cameraman Jamil Bassil, who has been working for the Al Jazeera English News Channel for 15 years, is in Artsakh during the Armenian-Azerbaijani war.

For ten days now, he has been working with reporter Bernard Smith, and they’ve been filing news reports every day.

Jamil Basil is from Lebanon and has witnessed war since he was a child. In Lebanon he started work as a cameraman in 1992 for two local TV channels since 1992: ICM and Future Television (owned by then Prime Minister Rafic Hariri). He then worked in Abu Dhabi, covering wars in Libya and Afghanistan.

The Artsakh war is one of the most difficult for him. The weapons used to shell the cities of Artsakh are unprecedented, as it is an attack on settlements far from the front line.

Jamil Basil says that being in the open, under direct shelling, means that the frontline is everywhere. And a journalist has to do their job, making quick decisions where they cannot be certain if they are right.

It’s a matter of your channel at the end of the day. Everyone would like to be a well-known international media representative but, if like in the case of the people in Armenia, you work for a local TV company, the odds of you becoming an international media representative is very small, unless of course, your TV company deploys you outside the country to cover stories for them.

For example, I worked in a local Lebanese TV company and I didn’t have to travel much, I only had to take 2-3 trips per year. My first experience working in an international media company was when I moved to the United Arab Emirates, Abu Dhabi. Since it was a news channel, there were a lot of assignments. They wanted international news so we were deployed all the time.

Sometimes we would spend 150/365 days a year doing work outside the country, filming, coming back, going live, covering war, covering sports, covering business meetings, but mainly we cover the news in areas of war and tension.

What is it like to cover wars? How many wars have you covered so far?

The first time that I covered a war was the one between Lebanon and Israel, in 1993 and then again in 1996.

I grew up in Lebanon and the civil war had started when I was four years old, so I have a good experience of what war is like. As a child, I was always taken to the shelter, by listening I would be able to tell what kind of mortar was being used at the time.

While I was in Abu Dhabi, the first war that I had to cover was the Afghanistan war. We were covering the topic of the American coalition against the Taliban. We were on the city border of Afghanistan called Peshawar because the Taliban would not allow us to go inside. And after that, I was in Tora Bora Mountain when they were following Osama bin Laden to try to catch him or bombard him or whatever. It was a very serious, strict war.

The second war was in Iraq, in Baghdad, during the invasion of Iraq in 2003. It is disputed if it was a liberation or an invasion, but whatever it was, I was in the middle of it in Baghdad and witnessed the mushroom explosion for the first time ever. I spent a bit over two months covering both before the war and during the war with Al Jazeera. Then l was in Libya in 2011. 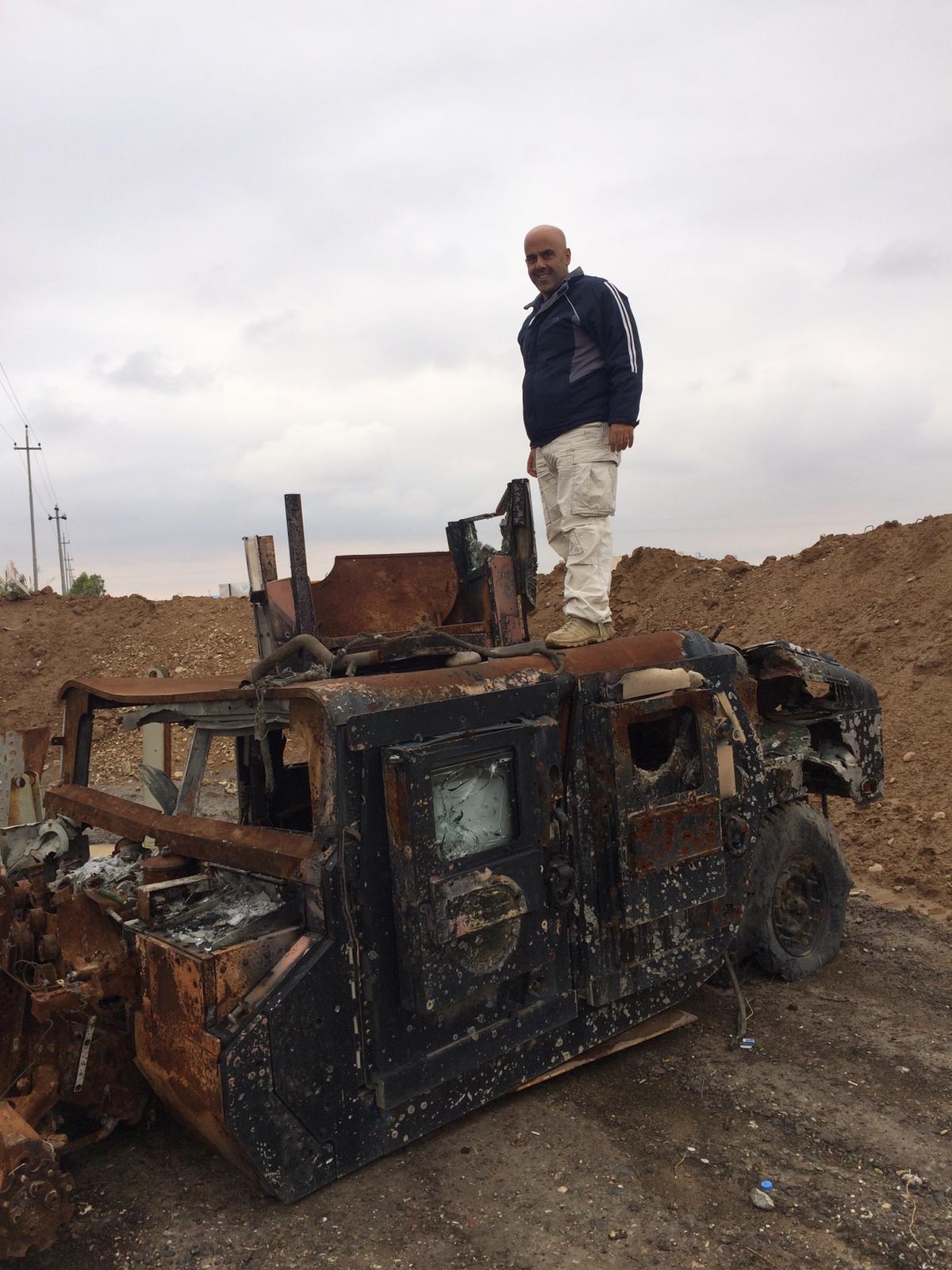 Above Iraqi military humvee hit by by ISIS in Iraq

If you remember, Muammar Gaddafi changed the capital city from Tripoli to Sirte because Sirte is his hometown. And he was surrounded. It was a serious war during that time.

What is the difference in covering the Karabakh war? It is a different war, a different experience.

It’s a different war. You cannot choose the location that you want to film from, because the city is under shelling non-stop. We don’t want to say 24-hour shelling, but it’s on and off and there is no such thing as a front line. You don’t know where something is going to get hit. But the good thing about Stepanakert is that there is a bomb shelter everywhere. And some of the shelters are from the Soviet Union, so they feel strong and you feel safe. But there are other shelters which you can tell, they are definitely not.

But this isn’t the front line, you are under shelling and you don’t know where a rocket will hit if you will be caught in the line of fire and get wounded or killed.

On October 4 we were filming footage of the destruction of a missile strike, and another unit came in of more than, I believe, 10 missiles of Grad or something like that, and we were in the middle of the street. How can you keep yourself in control when everyone is scared? It’s a good, but trying experience. Learning to control your fear when you are in the middle of a street when there is shelling, everything is out of your hands, your partner is with you and you have to finish your job. Without talking I had to look at my correspondent to finish the job, I have my footage, let’s get in the car, and let’s leave. 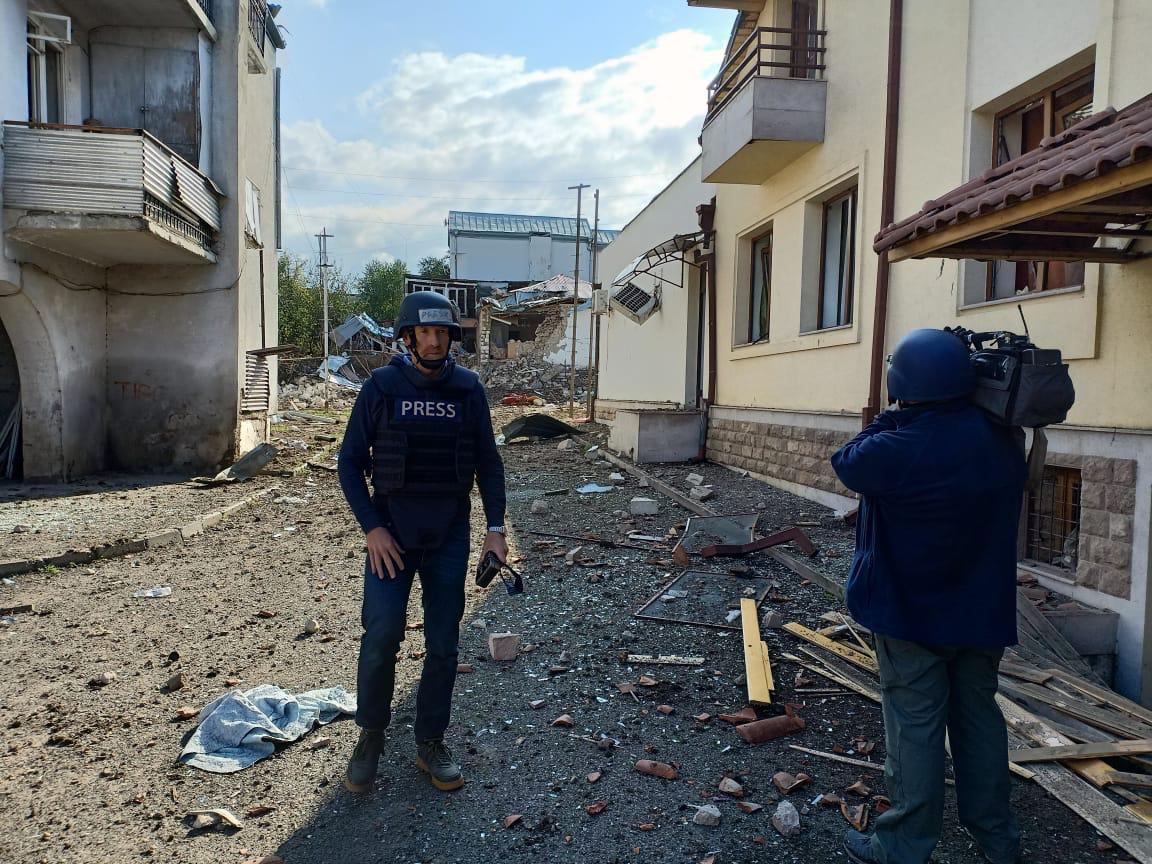 During the filming in Stepanakert, 2020

Everybody gets scared. I get scared, no doubt about it. But when you have your helmet and your flak jacket, you feel 30-40 percent safer. But you’re not 100 percent safe because you are in an open space, there is no front line, no direct contact between the two armies and you are expecting a rocket at any second, and that’s the problem.

So reporting directly from the front line is better than the current situation that we are in?

There is no shelling in the front line. There are small mortars, but when you hide inside any building, there is no need for shelter. You are fine when you have two armies 100 meters away from each other, they don’t shell each other with big rockets, just small mortars that you can protect yourself from more easily with a bit of cover.

You can even protect yourself from an AK 47 or a machine gun because as long as nobody can see you, you are safe. But when a city is under shelling, no, you are not safe, it is a high risk for everyone that they will fall under a direct hit.

So, I am sure in Al Jazeera and in other news companies they teach you how to handle the situation and about safety. Does it help?

We underwent a course on hostile environments, and they do refresh it often. Yes, they teach us. They give us an expert, a soldier, or what have you, and the soldier teaches us. The good thing is, they also teach you how to do first aid if you get hit. We have a first aid kit with us and if something happens we know how to help ourselves and other people. 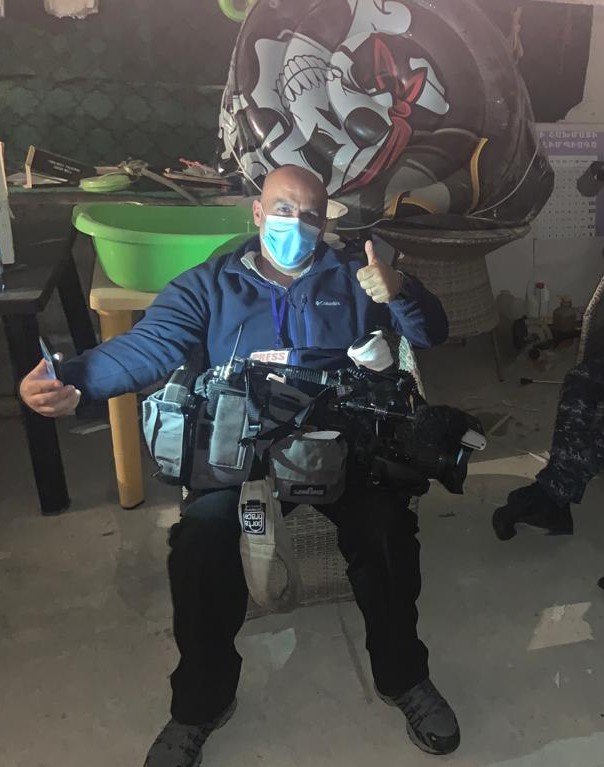 In the bomb shelter in Stepanakert, 2020

I see your camera, it’s a big one and you like it.  When you started, there was no internet, live video connections.

And what about technologies, Internet technology?

We used to use SNG satellite newsgathering. We had to know our coordinate point, we had to go back and feed it from the camera to our media station company, and they would edit it. Now it’s completely different. We are using 4 G. We are using a lot of subtle software to edit, because, by the way, I film, I edit, and I transmit it to the Internet. I have everything on my laptop to do that, all I need is 4G.

And one of the reasons that I left Stepanakert was because we don’t have the Internet yet. We don’t have the Internet, we don’t have electricity, so we would run out of batteries. That is why we cannot stay there. And a decision was made among the team members to leave the city. Now, of course, it’s very easy to record a video and put it on the Internet and spread it across social media before my footage gets there, but I when it comes to the quality, not necessarily of the report or footage, but of the standard that TV has, it’s different. We have to edit it, we add our voice over, we put natural sounds, etc.

With social media you just film and upload, and sometimes you don’t need it to be high-quality, because you simply need the audience to see what is going on. That’s the difference. It’s not that the traditional cameraman work is old school because people are still paying attention and waiting for the good report, for the good reporters or correspondents, because sometimes when you hear a report from a famous reporter with you, it’s like they trust him. He will send the message to you in the proper way. When people record and upload things live, I can see why it is good, but what is the message? With a good reporter the message will be faster, I believe.

When you want to film, you shouldn’t think about anything else. You have a family. When you are in danger, you have to isolate yourself, you have to think alone because if you think with even 1% of your brain about something else, then it gets in your way, and you don’t do your job. I am not saying that I am Superman or Batman, but sometimes you have to really control yourself, isolate yourself, and do what you have come here to do. I mean, no one can really forget about their wife or their kids, etc., but when you have to focus, you need to focus on just one thing and finish it. When you are done, you can think about other things.

Every time I find myself filming in a war zone, I say to myself, this is the last time I am going to do it. But then I find myself in yet another battle in the middle of another conflict area. I always say I want to stop now, but this is my job, and this is the only job that I want.