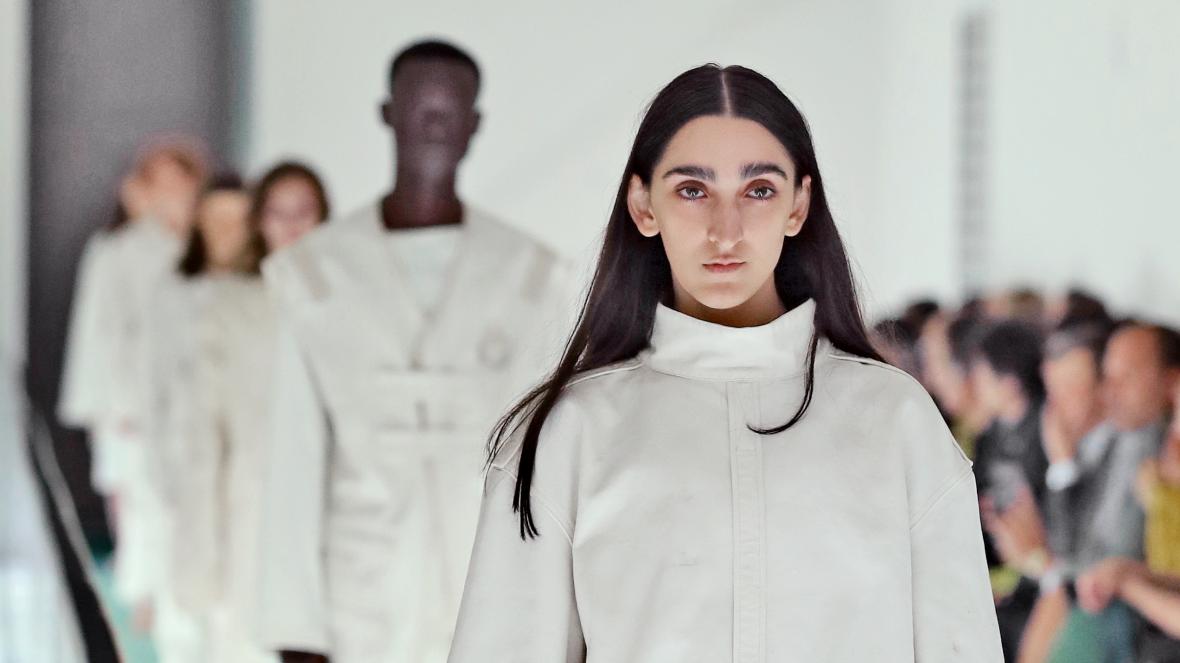 Artist, illustrator Armine Harutyunyan became known as one of the characters of Gucci fashion house, when in 2019 she participated in Milan High Fashion Week as a model. Her appearance was a small bombshell, as Armine’s non-standard, expressive appearance immediately became the target of serious discussions, hate speech, and insults.

23-year-old Armine inadvertently became an occasion to talk not only about the fashion/beauty industry but also about public complexes and stereotypes.

As much as the media has power, it has dictated to us and wrapped us in unreal, non-existent, photoshopped, artificially created and standardized beauty. And now anything that goes beyond the definition of that box is automatically rejected and even upsets people.

Armine Harutyunyan angered many, thus setting a new standard, suggesting that templates (beauty, fashion, media) do not work the way they used to. What is interesting is not uniformity (dressing, taking photos, cosmetic procedures), but uniqueness.

In his concept, Gucci’s show alluded to this, staging the idea that fashion dominates society like a belt-like uniform, becoming a means of control.

Armine Harutyunyan is a very peaceful, self-sufficient, and friendly person, she is not a fighter at all. And she admits that accepting her appearance required a lot of strength. After all, striving for the ideal is always easier than coming to terms with the idea of not being ideal.

The clash of the mass and the unique is always interesting. When there is an ideal, you want to be like it, you try to imitate it. And the more universal and easy to imitate the requirements, the more massive the image will be. You can’t be like Armine. She is not ideal. And that’s where her little revolution begins.

Now, a year after Gucci’s show, she still continues to inflame media attention and talk about stereotypes with her unusual (and at the same time natural) image.

It is a difficult and painful debate about standards and their dismantling.

Why did the controversy over your character resurface? Social networks and media are in turmoil, and you become the subject of harsh criticism (body shaming).

I do not understand it myself. It is also a secret to me why my appearance is constantly discussed. After all, I’m not the only model with a non – standard look. And my reveal on the catwalk was a year ago.

I guess the reason was the Forbes article, which by the way was wrong. They wrote that I had participated in Gucci’s show twice, but in reality, it was only once.

I am a particularly interesting topic in Italy at the moment.

I am being invited to many interviews, they write that I have broken many stereotypes in Italy.

Over the past month, many fashion magazines and newspapers have written about me: Cosmopolitan, Forbes, Vanity Fair, and more. Now there’s a great interest in Italy. I don’t know how long it will last!

Of course, it would be good if the conversations branched out and developed.

I hope there will be some kind of result and something good will come from it. Frankly, I’ll be a little upset if they just talk ineffectively about body shaming and bullying only to forget about it.

In my opinion, this attention is more capital than even becoming famous as a model in the classical sense of the field.

Of course, it is interesting when you become the subject of arguments and debates.

But to be honest, I felt very bad, I was upset, I was sad when I heard and read the opinions addressed to me.

But now I seem to have learned to ignore derogatory comments and try to really listen to those who want to say something positive in these disputes.

Did you read all the comments on social networks? The impression is that you can go crazy from reading it.

I used to read them, but not anymore.

In fact, almost everyone is dissatisfied with their appearance – it is difficult to live at peace with one’s own body. Hasn’t there been a rapprochement to approach more mass standards?

Yes, of course, that’s the temptation. You always think that you can fix something, add something, cut it, beautify it so that this becomes this way and the other becomes that way.

But with age comes the realization that your appearance … I do not know how to say it … is your identity. Perhaps that is the right word for it …

Appearance reflects individuality. And that is the most important thing!

Those who have a large audience on social networks and form public opinion are mainly people of beauty, fashion, and pop culture, who monetize their fame. One of the proofs of that is our beloved Kim Kardashian. Do you have a desire to play by those rules, especially since you have a lot of followers, for example, on Instagram?

It seems to me that, according to the stories created around my image and my name, that I fall outside the rules of the game.

I fall outside of the rules of social media, because I don’t put on makeup, I do not process photos with special filters, nor do I do advertising. I want to be natural, to follow that approach, for example, on Instagram.

My friends and I were active participants in the Velvet Revolution. That’s all. I can not imagine more. Maybe even that is contradictory, contrary to my nature.

If I do not want to do something, it will definitely be bad. 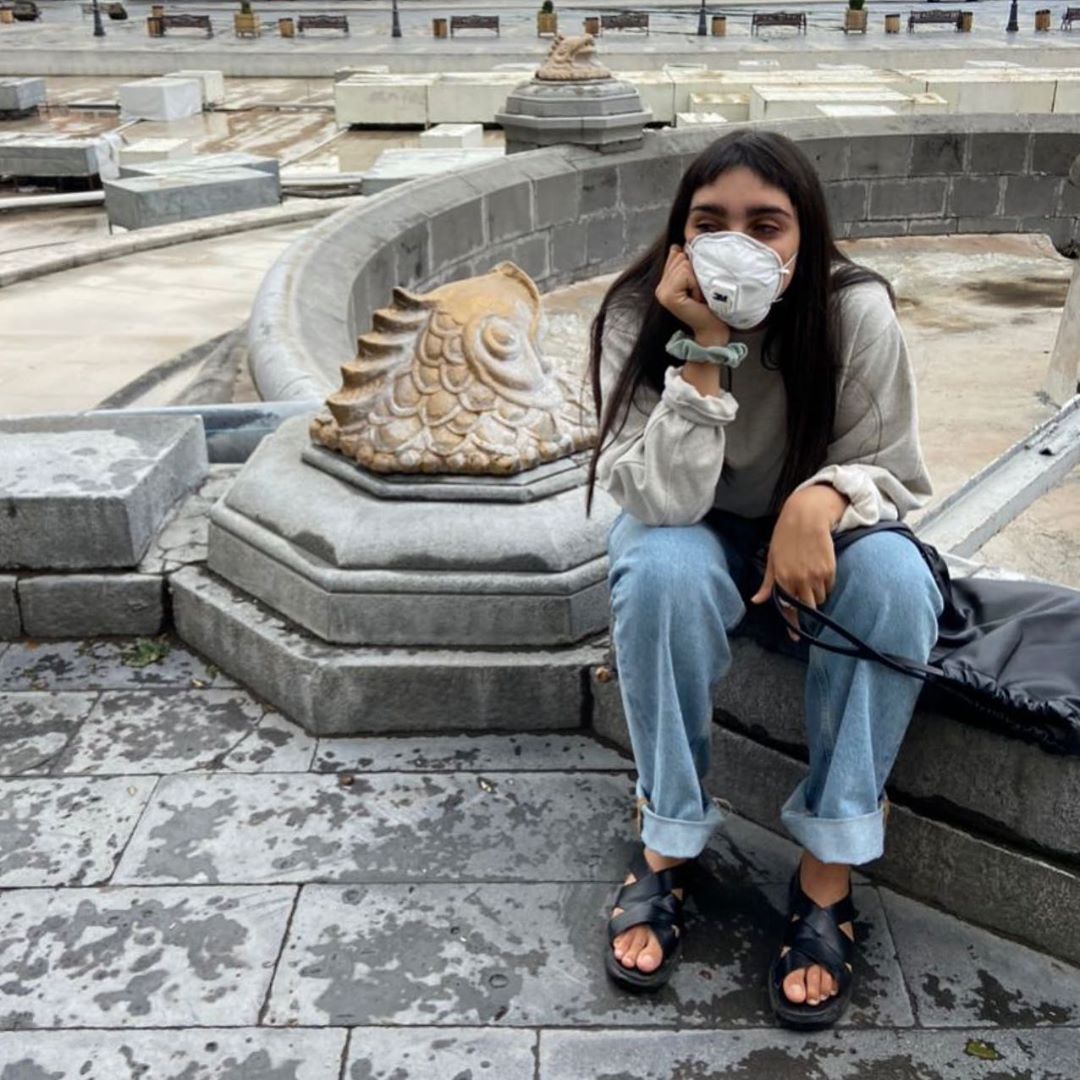 I am a painter by profession, graphic designer, I also studied screenwriting. And I put more of an effort into finding myself in those spheres by combining work and doing my own design.

I have a dream of organizing an exhibition.

A modeling career is just a hobby. A source of more positive emotions. But I would be happy to see this hobby continue and become more serious.

I couldn’t even imagine that such rumors would arise. I did what I enjoyed doing and did what I could.

If, for example, by looking at you, young people do not want to be mainstream, with the same clothes, appearance, and make-up, it will be a revolution that was started unintentionally.

I will be happy if that revolution really takes place. Stereotypes are being broken in the world, dogmas are changing.

And women’s appearance is no longer just the result of men’s desires. The appearance of women is only a reflection of the female brain, thoughts, and feelings.

For example, I have never sought to be the ideal and please everyone. But like any individual, I want my personality to be valued.

I think a lot depends on our upbringing, family, environment where you grow up. I, for example, grew up in a family of artists. We can say that we are tribal painters because my parents, grandparents, and great-grandparents are also painters.

I have always been free in my choices because it helped me not to be like others, but rather to find myself in this world.

Of course, there is always a desire to be better, but if your family gives you the right advice, you realize that you should not go back in time.

After all, beauty patterns change forever; the same thing is never appreciated.

During the Renaissance period, obese and lush women were valued, in other centuries – women without eyebrows or with very thin ones.

A lot has changed in perceptions of beauty, and it is changing even now. There are no clear criteria. The only clarity is your personality, which is not only expressed in your appearance but also shows your self-development, education.

Appearance is just a reflection of all that.

Becoming a media person makes it seem like you no longer belong to yourself. Are you editing your life now?

When they meet on the street, of course, you get a little tense. It can make you want to shut yourself off from everyone. And now I am trying to overcome that inner tension and the feeling of closing myself off. At first, it was very difficult, but now it seems that I have managed to come to my senses and live again in the routine I am used to.

When people in Armenia want to hurt and offend, they usually say that this is not traditional or that no one knows how tradition is measured. How do you define tradition?

Traditions are also a part of me. Traditions never hinder or impede. I think people are hampered by their limited brains.

I really want girls (boys too) not to criticize themselves too much and not to run away from stereotypes, but to try to educate themselves, to develop themselves, to maintain their personality, because personality is much more interesting than when everyone is the same.

Many girls have trouble accepting their appearance. And I would very much like them to overcome that problem and allow the inside to be reflected on the face.

Fashion, glamorous magazines, the similarity of characters is actually a big industry where there is a lot of money. From plastic clinics to the media, everyone is serving the industry. Uniqueness is not welcome there, as it is not known what they will sell if there is no mainstream.

I do not think that everything is so hopeless because there are individuals, for example, Gucci chief designer Alessandro Michele, who try to go against the mainstream and every year choose models with an unknown and unique appearance.

They choose those who are different, realizing that what is interesting is not the template, but that which is found outside the template.

The situation is slowly changing as society demands new things. It seems that the demands of society are growing and reaching the point where the industry itself is changing. There was a time when it was required to be the same, but now it is not so. The demand is changing.