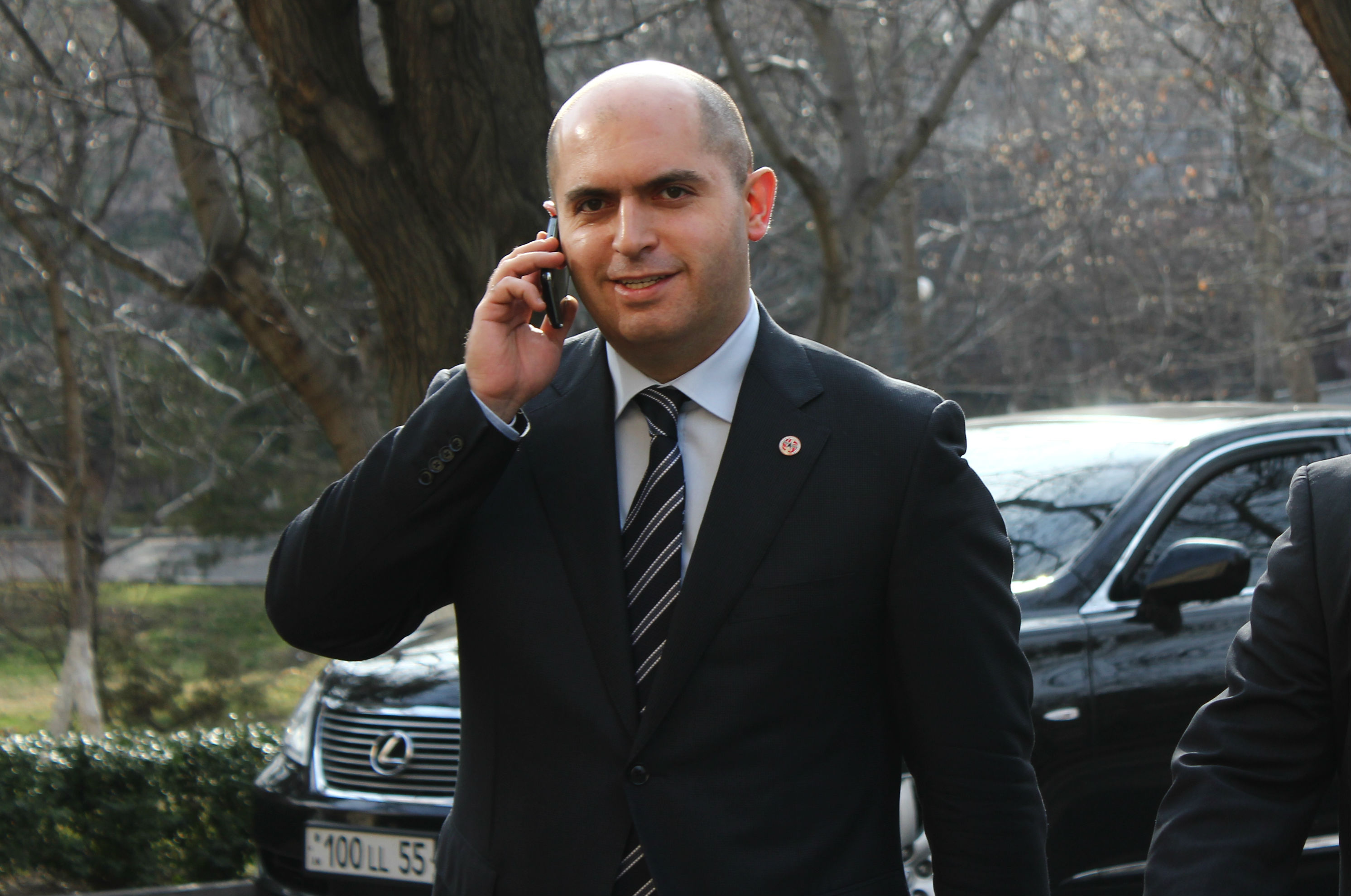 Republican Party of Armenia (HHK) vice chair Armen Ashotyan is an active user of the internet. Social networking sites for him are work, to interact with a large number of followers and to inform them of his party’s next steps. He manages his (verified) Facebook account personally.

Ashotyan knows how to communicate with journalists, and as public figure, he knows his way around media traps. Sometimes he ignores them, demonstratively scorns them, and sometimes he’s forced to overcome them.

He dabbled also in the media sector, hosting the political talk show Yerankyuni (Triangle). “It was a great time. Hosting a show was an intellectual, political, and technological challenge, and I like challenges,” he says.

He identifies the main challenge to be building trust. “During any debate (also familial) the easiest thing is to let off steam and exchange hurtful words. It’s important what we’re going to do after. The important thing is the recovery phase.”

Do you need to shape opinion on social media?

I’m on social media because it’s both modern and trendy, and useful. I’m young and a political figure, and I try to be where there’s an audience. That’s important for me first of all.

I’ve been registered on Facebook since 2008, and I used it particularly actively during my years as Minister of Education and Science, since it’s a good way of communicating, feedback, and promotion.

Even when I had staff, no one worked on my page — only I manage my personal page.

I’ve never allowed anyone to reply or share anything from my page. Of course it’s time-consuming, but it was worth paying the price, since when the public sees that it’s me writing, it trusts [me] more.

Of course, there have also been cases of abuse, from insults to indecent wording, but users are generally well-disposed.

Do you moderate the insults frequently?

I delete only the personal insults, addressed to not only me, but also my political opponents. By the way, there are insults from both extreme pro-government and extreme opposition camps. Especially from fake accounts.

Many fake accounts are created by HHK advocates.

Maybe there are also those, but you can’t attribute this only to us; there are fake accounts in all political camps, which become particularly active during election campaign periods.

These technologies are now accessible. They were visible during the 2012 parliamentary elections, while in 2017, they were used much more professionally. We used, for example, social networking sites s a platform for campaigning.

The election campaign showed that there’s a need not for discredited, prominent, and old-time faces, but for fresh faces that are less blurred.

I don’t accept this form of classification, but there’s always a need for new faces.

In nature, every stage of development leaves its sediment, its layers, which form the Earth’s crust. In our party there are people with different reputations, educational qualifications, and professions. We represent a people, and people are very different: from the academic to a person whose education level can be examined, but nevertheless he has authority in certain circles.

I admit that everyone needs fresh faces, and that is a global trend. In civilized society, everything has intensified, and the threat of political figures to wear out is great.

We have to be very different. Of course, we have to work on image-making and rebranding. But we’re refreshing ourselves and remaining current because we have the most important [thing]: we learn.

How would you explain the mutual insults and clashes that regularly erupt between journalists and political figures?

These problems arise everywhere. Don’t spread them only on the HHK.

First of all, journalists must know what they’re asking to whom. For example, if they ask me about agriculture, I won’t be able to respond because I’m not used to talking about things that I don’t understand.

And when journalists approach a person and try to “seize” an interview (but actually they’re trying to get a scandalous story), so they evaluate not the content, but the media uproar.

Of course, politicians have to be adept so that they can abstain from such traps, but, you have to agree, journalists can approach MPs in the corridors of the National Assembly and conduct so-called group interviews. It seems this is the new “sport.”

Some MPs or other politicians like this level of engagement.

There are newsmaker politicians who have media skills, and if journalists don’t stop taking similar interviews from them, then they like that too. If readers, journalists, and politicians are satisfied, then let’s take this as a unique fact.

Is the HHK also satisfied?

We regularly discuss the principles of the party’s information policy, especially within the scope of serious political developments. It’s good to decide who will talk when and on what topic; what shouldn’t be said; what should be emphasized.

That’s what I mean, we work on ourselves.

The problem is that decision-makers aren’t open and accessible to journalists.

Government offices are obliged to be open and ensure not only the verbatim, but also the content execution of the provisions of the Law of Freedom of Information. This is the obvious truth.

I’m sure that all the informed heads of the state departments place importance on access to information.

I, for example, am obliged to answer all the questions of all the media. There are time constraints, content preferences, and, ultimately, also personal sympathy and antipathy. If there’s a media outlet that regularly publishes biased information or uses smearing wording, we don’t work with them.

You too know that smearing is not only with words, but also with unsuccessful photos or videos, which are published with pleasure. In Western journalism ethics this is considered black wording.

There are media outlets who deliberately publish the ugliest images of the ruling authorities.

If I notice an obvious trend, I refuse to work with them. And no one can accuse me; on the contrary, we need to blame the media outlets who, being the megaphone of public opinion, don’t try to transmit balanced information.

And if the journalist is not decent and takes the headline out of context purely to gather an audience, then we’re dealing with obvious unprofessionalism.

For example, when they upload a video on YouTube, they use the ugliest shot of the ruling authorities as a freeze frame. Even if it doesn’t appear in the dynamic segment, static frames emphasize that one’s mouth is open; another’s eye is crooked…

Maybe now I’m talking about minutiae, but they are minutiae that create the environment. Most of the public doesn’t read [the story], just looks at the photos, short videos, and reads the headline.

To what extent do you value the transparency of media funding? It is often unknown, who a media outlet’s owner is.

As much shadow there is in business, there is as much proportionally in the press. Our press sometimes moves to media attacks on this or that person, it performs so-called “operations.”

We’re a small country, and anyone who’s worked with journalists and political flair, can see the client behind every news article. That’s obvious.

I believe, in the case of the media, what’s important is not so much the owner as the client.

Because the owner is the same, but the clients change. As for why the clients’ names are hidden, that’s a problem of the corporate ethics of journalism. All the professional associations have to take more of an interest than the regulatory bodies to maintain purity in their ranks.

Let me put it more openly and honestly — the political and media fields are vessels of communication. And what’s important is not the eternal “Who is to blame?” public discourse, but the attempts to understand how the level of these two fields can be raised at the same time.

News media are the mirror of political processes. And the opposite. A political culture must be formed, and also a media culture stemming from that. I think it’s a matter of time.

Tabloids have wide application in all countries; they are better sold than serious media outlets. But tabloids never create public opinion. But in Armenia, unfortunately, they do.

There are media outlets who believe they are political, but really they’re tabloids.

I understand those who try in this chaotic media noise, in the constant buzzing, to be competitive and simultaneously work with several target audiences. This not a good life; it’s a struggle for advertising, audience attention. That is to say, for ratings, which brings in money.

Business, politics, and the media have converged so much and turned into a monopoly that the media has almost no chance of being independent. Including also living only on advertising dollars.

I’m not justifying the existing problems, but they’re the same in all countries where there are financial-political groups. We can’t reinvent the wheel; there are schemes, but they’re not absolute.

In some countries they are kept far from each other by intermediaries: unions, media outlets, NGOs. That is, there is a developed civil society. Whereas in other countries, these two poles are so close that they are difficult to separate.

And our issue is building a civil society. And the scheme for that is as follows: to increase the gap between money and power as much as possible through beneficiary groups.

If money and power are already difficult to separate, the steps to disconnect them, as a rule, are a formality.

Transitional democracy will be overcome one day and we will come to a full democracy. I honestly believe that.

I am a representative of the political elite today, but my children won’t have this status forever.

And since I want to see them as proud citizens of the Republic of Armenia, my task is not getting short-term results, but providing such an environment where also our children will be able to live in a dignified manner.

Ultimately, a generation must assume the task of cleaning an environment.

I want to ask a frank question. How much can one utter beautiful words and build a mold that is filled with emptiness? It’s no longer possible to live by self-deception. The poor and obedient man who takes the bus every day with his neck bent cannot be dignified.

I fully agree that dignity is an important human attribute. But don’t lay the blame of today’s problems on deliberate policy. There’s no such thing.

But public transportation and the school model can easily be corrected.

I can be sucked into the vortex and speak as the former education minister, but I want to be sincere.

Public resistance must be formed for changes [to occur].

When mass demand of a knowledge-based society will be formed, much will be corrected.