“A journalist is not a taxi driver, to whom you give money and say take me where I want to go” 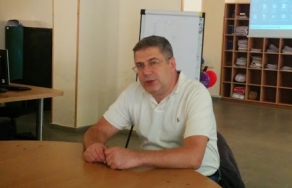 Academy of Ukrainian Press President Valeriy Ivanov advises journalists to remember that they’re not people with a divine mission but tradespeople. And even during serious information wars it’s necessary to be guided by the basic requirements of the trade and not fulfill orders of propaganda.

Ivanov finds that Ukraine made a wrong move by stopping the broadcast of Russian TV channels in its country. “Even if the channels are spreading absolute lies, people should have the opportunity to see those lies. Banning in the information age is not only ineffective, but also just foolish,” he says.

Under conditions where nearly all news outlets have their owners and fulfill the orders of a fairly narrow group, how can free media be described? Journalists (for example, in Armenia) clearly know what and how to write in order not to lose their jobs.

The answer is quite simple: under all conditions, the journalist must fulfill the order of the audience and not the employer. Generally, there is a clear difference between regular and so-called socially responsible professions.

A journalist is not a taxi driver, to whom you give money and say take me where I want to go because I’m paying you. Journalism is a socially responsible profession, as, for example, a police officer, a doctor. That is to say, receiving money from his employer, he does his work as he sees fit — proceeding from the interests of his audience. And his responsibility before his employer is doing good work — without lies and according to standards.

In Ukraine, friction between media owners and journalists is extremely acute. Journalists are dismissed from their jobs or they quit.

I think, there’s only one way: we have to try to overcome this dependence. I understand that this isn’t a fast process. There are similar problems in the West. A journalist’s work is often tied to the amount of advertising. But that’s a completely different situation. There’s a big difference between our problems and theirs.

In any case, you mustn’t fold your hands and say you can’t change anything. Journalism is one of those professions that implies struggle — a struggle with those who don’t want to provide information. A struggle also with yourself, since you’re often forced to write a story taking into account a view you don’t like.

What’s important is realizing that we work not to stroke our egos or satisfy the desires of an employer, but for the audience. And by the way, this audience is not abstract (the entire population of the country), but very specific (the consumers of your media product). Journalism always has a specific recipient.

Many journalists in Ukraine who don’t agree with the media owner’s demands leave that news outlet and look for new work. Often, they receive significantly lower pay at the new job, but they protect their name. Is it like that here [in Armenia]?

Our market is small and many media platforms are included in single media holding (also unofficially). There are practically no uproarious cases of [journalists] leaving [their jobs].

After all, you can go to the internet. Many Ukrainian journalists do two jobs at once: one at a major media organization (say, television); the other, online, where they can allow themselves to write that which they consider truly important.

But that causes a split personality.

I would say more than that, it’s schizophrenia, an internal cognitive dissonance. But what can you do? After all, those who become journalists are mainly those who are capable of fighting. They become conformists much later, with age. A lot can be corrected if those who are fighting are young. And if not, then the consequences are terrifying.

Do you consider it normal that political news dominates the news?

During a time of peace that’s not normal; [instead,] there should a lot of media coverage of social issues. That is, those stories that help people to live, while political and economic information definitely passes through the prism of social matters.

If political news dominates (particularly, domestic politics), it testifies to journalistic laziness. After all, there’s always a lot of news in the political sector and many of the instruments act as newsmakers — by pitching a news item they need to the media. And it’s very easy to write a piece based on some politician’s remarks or press conference. That’s bad journalism.

It’s much harder to seriously investigate a topic of concern; for example, to find out why a healthcare or educational issue is not being resolved. There are subjects that assume conflicting interests, and you must be prepared to present them in a way that benefits the audience.

The information war that’s happening between Ukraine and Russia reminds one of a Soviet propaganda front. What do you think?

Russian propaganda is more like sly intrigue. Soviet propaganda preached that it has to be like this because this is right. But modern propaganda appeals to emotions, simple human emotions. A bright example were the reports of the boy who was crucified, in which heard in every scene and word was “see, these people have no right to be called people — they kill a child by crucifying him.”

As a result, people lost their ability to think rationally and moved on to emotions — and, by the way, emotions that are unequivocal. They told people there are the guilty and the innocent, and if you suddenly try to sympathize with the guilty, then you’re a scoundrel and you have to stop respecting yourself.

Such propaganda has a huge impact. But there’s only one way out: to work honestly. Even if you are asked to present Russia’s actions from only a positive (as is the case in Armenia) or only a negative (as is the case in Ukraine) viewpoint, it’s necessary to put together a news story by combining several opinions.

A word about language. Language seems to be a harmless tool only at first glance; in reality, it’s a powerful weapon. It was with the help of language that, for example, the Balkan countries were able to throw off the yoke of the Ottoman Empire. Particularly Serbia, which was very smart, making instruction in parochial schools exclusively in the mother tongue. As a result, what grew was a generation that had a national outlook.

Language is shaped by attitude toward the world. For example, those residents of the Donbas who speak Ukrainian are clearly supporters of Ukraine’s statehood, while those who communicate in Russian, Russia’s [statehood]. Language is a sign of identity, and if the same nation speaks in different languages, then the likelihood is great that during times of conflict people will be on different sides of the barricades.

I’m confident that if we had a period of 10 years and managed to adopt Ukrainian [language] throughout the country without upheavals, separatism would be impossible. Of course, education here is completely in Ukrainian, but that was accepted with difficulty.

Taking [people] to paradise by force is not always a good idea.