‘Journalists are Not Soldiers in Information Warfare’ 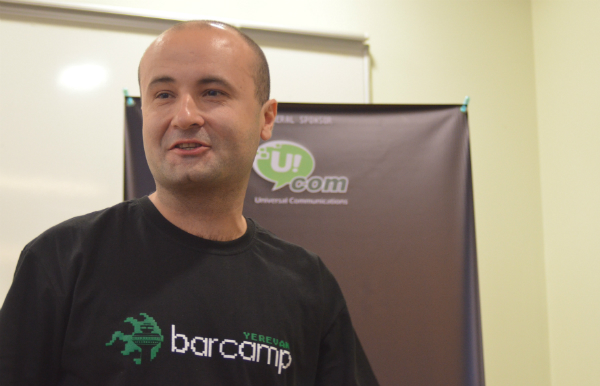 Created in February of this year with the aim of publishing confidential documents discovered at former Ukrainian President Viktor Yanukovych’s luxury residence, the site YanukovychLeaks was a major journalistic achievement.

The documents, rescued from the lake and not completely destroyed because of the president’s hasty getaway, became the basis of many articles and investigations. Those journalists who succeeded in saving the facts related to wasting the budget and governance of the state did a real civic deed. For two consecutive weeks, with the help of volunteer divers, they removed the documents from the water, dried and organized them, while also trying to resist their seizure.

And it so it was that several journalists filled the open and pretty ugly pages of the recent history of their state. The journalists decided to collaborate with various news media platforms and non-governmental organizations, first trying to save the 200 folders of papers and uploading them on the site in portions.

One of those journalists was Vlad Lavrov, who works for the English-language Kyiv Post and the Organized Crime and Corruption Reporting Project (OCCRP).

At BarCamp Yerevan, he talked about creating the website, their work, and information warfare in the news media.

Collecting and investigating Yanukovych’s confidential documents was done exclusively by journalists. How were you able to resist the Prosecutor General’s demand and not surrender the documents to that office, but make them available for everyone?

The situation was very tense, since no one knew what awaited us. The activists who were controlling Yanukovych’s estate told us: “Resist as much as possible. We’ll try to gain a few days by establishing contact with international organizations.” In fact, I never found out whether there was pressure put on the Prosecutor General’s office or not. It’s more likely that there wasn’t.

You understand, the situation in Ukraine seriously changed after the Euromaidan; public support increased unspeakably. And we, those 4–5 journalists, who found the submerged documents, lived for a few days literally in a contained situation. In the place where we were drying, investigating, and scanning the documents, there was even no internet.

Perhaps the more rational explanation is that the Prosecutor General simply didn’t want to deal with it. The wet documents occupied an entire room (about 200 folders) — drying them was an unpleasant and arduous task. They told us: “You work, and later, we’ll take the documents in small portions.” It was more convenient for them like this, since simply moving them required a truck.

We agreed that initially we’ll restore and digitize the documents, and then we’ll hand them over to them. Among the volunteers helping us were also employees of the state archives; there are no such experts at the prosecutor’s office.

Finally, after two weeks’ of work, the Prosecutor General officially said all the documents were received and thanked the journalists for their assistance.

If a similar thing happened here [in Armenia], the Prosecutor General would quickly seize the documents, shunning possible compromise.

The first hour of the discovery of the documents was the turning point. If we weren’t resolute, of course, we wouldn’t have succeeded in making them public. That was the moment when we understood that we’re in charge of the situation.

Journalists seldom make such unanimous decisions and consider the public interest and not their own investigation a priority (after all, the documents had a bomb effect).

But we had no other choice. We saw that in the documents, there was information collected against Maidan activists, testimonies of bribery on a horrific scale, and confirmations of cases of corruption that were simply astounding in their cynicism. What would we have done? Hand them over to the Prosecutor General’s office with a clear conscience? Of course we couldn’t, just as we couldn’t go and write our own articles based on these documents.

Yanukovych’s former mansion was full of people, including also journalists. Journalists mainly preferred not to help us (and we really needed help, since we worked day and night), but to photograph a few documents with their phones and share them on social networking sites.

Of course that was very unpleasant and offensive. There were serious arguments and conflicts with a few journalists. Many came and said, give us a few documents so we can prepare a reportage. We replied, it’s not the time for that now; it’s necessary to rescue the documents quickly, since wet paper only has a few days’ life and it simply won’t be able to be scanned later.

I want you to picture what tremendous support there was from the public. People brought us food, believed in us, tried every way to be useful.

Even thinking that ultimately, with our work we have earned the right to be the first to publish the documents (each of us in our news outlet), we didn’t do that. We preferred to make the documents available to everyone.

I guess when you get inspiration from the public, you also have to return it.

Can public inspiration and energy be maintained?

Our society has completely changed now, and fortunately, that’s irreversible. Even now, when people are tired somewhat, they understand quite well that in the case of any catalyst put forward by the new authorities, they will no longer wait obediently.

I think, the newly elected president (who in any case is legitimate, which cannot be said in the case of the former president) has approximately six months to prove that he is worthy. Otherwise, the public won’t tolerate him.

The new authorities also understand this, and I think they will be very careful and attentive.

Were court cases launched based on the documents?

Currently, 10 court cases were launched based on YanukovychLeaks; an investigation is underway. The issue is just that the majority of the players are in Russia, and it’s not possible to get testimonies from them.

I don’t know how those cases will end. I hope that the evidence uploaded online will be considered sufficient.

Investigative work conducted by Armenian journalists, as a rule, doesn’t reach the courts. The authorities simply ignore them.

Until the Maidan, it was like that for us too.

If I react to that too, I won’t survive. I don’t watch television on principle, and Russian channels aren’t broadcast in Ukraine. Actually, this is a very complicated issue. In terms of work, I’m often in Russia, where I conduct journalistic investigations and seminars. And when I hear “Oh, you! With money from the state department…” and other nonsense, I prefer not to respond. What can I say? It’s quite complicated…

I only know that if you begin to respond in the same manner (“better you take a look at yourselves”), the situation will only get worse.

Journalists are not soldiers in information warfare — neither are they aggressors. Let people listen to both sides and come to their own conclusions. Perhaps this is the right way. After all, people believe what they want to believe.

It seems to me, for the majority of Russia’s population it’s psychologically easier to believe that everyone in Ukraine is corrupt, fake, weak. It seems, this way, they hide their lack of courage. And when you convince yourself that Ukraine is not real, you don’t feel even a morsel of remorse.

Ukraine changed after the Euromaidan. Can it be said that the media sphere likewise [changed]?

There were changes among media owners, but it’s a pity that lustration of journalists didn’t happen. And that’s very important.

Some journalists were dismissed from their jobs, but only for the explanation that the ratings for their broadcasted news dropped. Many began to host not news but concert programs. That is, they continued to remain within their profession.

I really can’t imagine how it’s possible to present cases of death, saying that people are shooting at each other. That’s… not forgotten. And it won’t be forgotten.