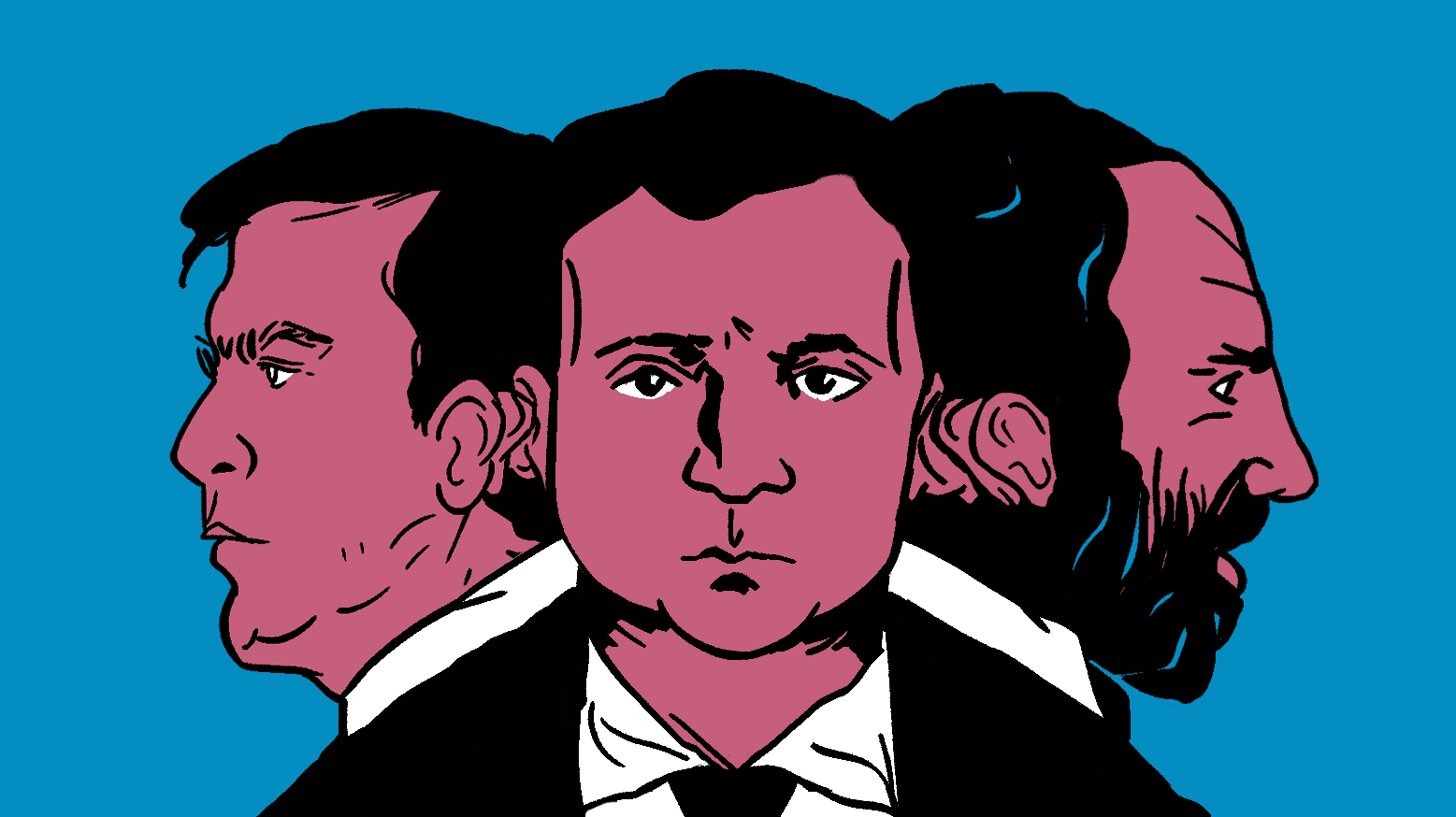 Russia’s invasion of Ukraine on February 24 of this year is one of the biggest geopolitical events of recent decades. It received a widespread response all over the world.

Armenia is not an exception. The authorities of Armenia have largely remained neutral in this matter. This is evidenced by the official announcements and by the abstention votes of Armenia in the UN General Assembly and the Human Rights Council on issues related to the conflict.

The image is different in some parts of the non-governmental field, particularly in the propaganda statements and posts of figures and user accounts from the opposition field. We are talking not only about the well-known figures of the parliamentary opposition but about the figures and platforms connected with the opposition in some way or related to them.

Undisguised support for Russia’s “special military operation” can be seen only among some figures. In particular, on March 14, a small demonstration in support of Russia took place in front of the Russian Embassy in Yerevan. Among them was former PAP deputy Aragats Akhoyan.

And on March 19, in support of Russia’s actions in Ukraine, a rally was held in Yerevan, among the speakers of which were former PAP deputy Tigran Urikhanyan, former RPA faction deputy and owner of “Iravunk” newspaper Hayk Babukhanyan, singer Mher Mesropyan (“Mger Armenia”) and others.

More often, some opposition figures and platforms promote two narratives. First, Ukrainian President Volodymyr Zelensky and Armenian Prime Minister Nikol Pashinyan are “the same” and secondly, Ukraine is to blame for the start of the war. The first one has an internal political significance, but with a global flavor, and the purpose of the second one is to justify or justify Russia’s actions.

The first narrative, which has been shared among opposition figures, platforms, and accounts on social networks, is the comparison of Ukrainian President Volodymyr Zelensky and Armenian Prime Minister Nikol Pashinyan.

Thus, for example, RPA member, former Deputy Minister of Defense Artak Zakaryan, talking about the sanctions against Russia, ends one of his Facebook posts (archived) with the following line, “Comedians, populists, street parasites and other unbalanced degenerates cannot be trusted with power.”

Zakaryan in another post (archived) without naming Pashinyan or Zelensky, calls them “lucky clowns” and claims that when “velvets, colorful roses, Arab springs, and orange Maidans are wrapped on people’s heads from the outside,” it can lead to nuclear weapons. of application.

And on the day of the invasion of Ukraine, Zakaryan wrote (archived) that “The peoples of the countries at geopolitical crossroads must finally understand that populism and adventurous government are destructive, in the first case, for them. Moldova (1992), Georgia (2008), Ukraine (2014), Armenia (2018)…” Here, the comparison was not between Pashinyan and Zelensky, but between the “Velvet Revolution” and “Euromaidan,” but the phrase “populism and adventurous government” is clearly aimed at them.

The former president of Georgia, Mikhail Saakashvili, is often added to Pashinyan-Zelensky comparisons. The former president of the Chamber of Advocates and head of the “Zartonq” national Christian party, Ara Zohrabyan, announced the day after the Russian invasion, “Nikol Pashinyan is an unsuccessful manager. He, Zelensky and Saakashvili are the results of the same factory.”

Zohrabyan is also a member of the “Liberation Movement” initiative, which organized a signature collection demanding Pashinyan’s resignation.


Gagik Hambaryan, a prominent political scientist with oppositional views, compared the three on July 5 and used a much stricter vocabulary. Captioning a video depicting Zelensky, he wrote, “Are all colored revolutionaries schizophrenic? The facial expressions of the tie chewer, the pen thief and this one are the same…” (archived).

Saakashvili got the name “Tie Chewer” because he chewed his tie in a nervous state on live TV during the war with Russia in 2008. And the label “pen thief” was given to Pashinyan by some oppositionists for putting a pen he was using in his jacket pocket during a recent meeting.

One of the most significant examples of this narrative is the press conference of military expert and former advisor to the Minister of Defense, Davit Jamalyan, on March 1. Hosting the Director of “Mirror Club” NGO and editor-in-chief of hayeli.am website Angela Tovmasyan, he repeats the above-mentioned narrative.


It is worth noting that in keeping with his style, Tovmasyan already directed guests and opened the press conference as follows, “That said, when populists and clowns come to power, what can be expected? Because what happened in Georgia, Armenia, and Ukraine is being repeated. We see that everything is very similar.”

Jamalyan, whom Tovmasyan introduces as a psychologist by profession, answers, as if confirming Tovmasyan’s inclusive speech. “When clowns, populists, those who represent nothing of themselves are brought to power in this or that country with a colorful revolutionary scenario, that country ceases to be a subject after a while. These are the kind that destroy the state,” Jamalyan said at the very beginning of the press conference. 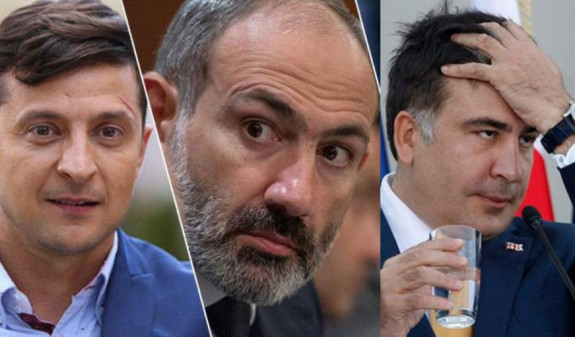 In addition to “Mirror Club,” this press conference of Jamalyan was also published by Asekose.am and Politik.am news sites on YouTube channels.

Hayk Nahapetyan, another military expert from the opposition, is also in this line. In a conversation with the website “Pastinfo,” he repeats these narratives. And at Tovmasyan’s press conference held at “Mirror Club,” he presented Russian propaganda narratives.

Pashinyan-Zelensky commonalities were also made by the media related to the opposition forces. On the second day of the war, Para TV’s online channel, which is affiliated with Vahe Hakobyan, deputy of the “Armenia” bloc and former governor of Syunik, made a short video with the text “Vladimir Zelensky and Nikol Pashinyan: The analogy of the humble servants of the people.”

The author of the video said in line with the style of the examples mentioned above. “Pashinyan’s and Zelensky’s speeches and messages follow the same logic. Almost in the same style, just with the special national vocabulary characteristic of Armenians and Ukrainians.” This video was republished by “Yerevan Today.”

“Channel 5″* advanced the same narrative with a short report on March 22. In the video, excerpts from Pashinyan’s and Zelensky’s speeches with the same content are presented, that the people should decide everything. And the journalist says, “Pashinyan-Zelensky are like two drops of water. The experts compare them.”

These comparisons are also made using anonymous user accounts. They have gained some popularity on TikTok. Several pages with an open opposition orientation draw similar parallels between the two in the first days of the war.

On the very first day of the Russian invasion, the page named “patriotisch” describes them as “populist landowners” in a video (archived) that flips through the portraits of Pashinyan, Saakashvili and Zelensky one after the other. 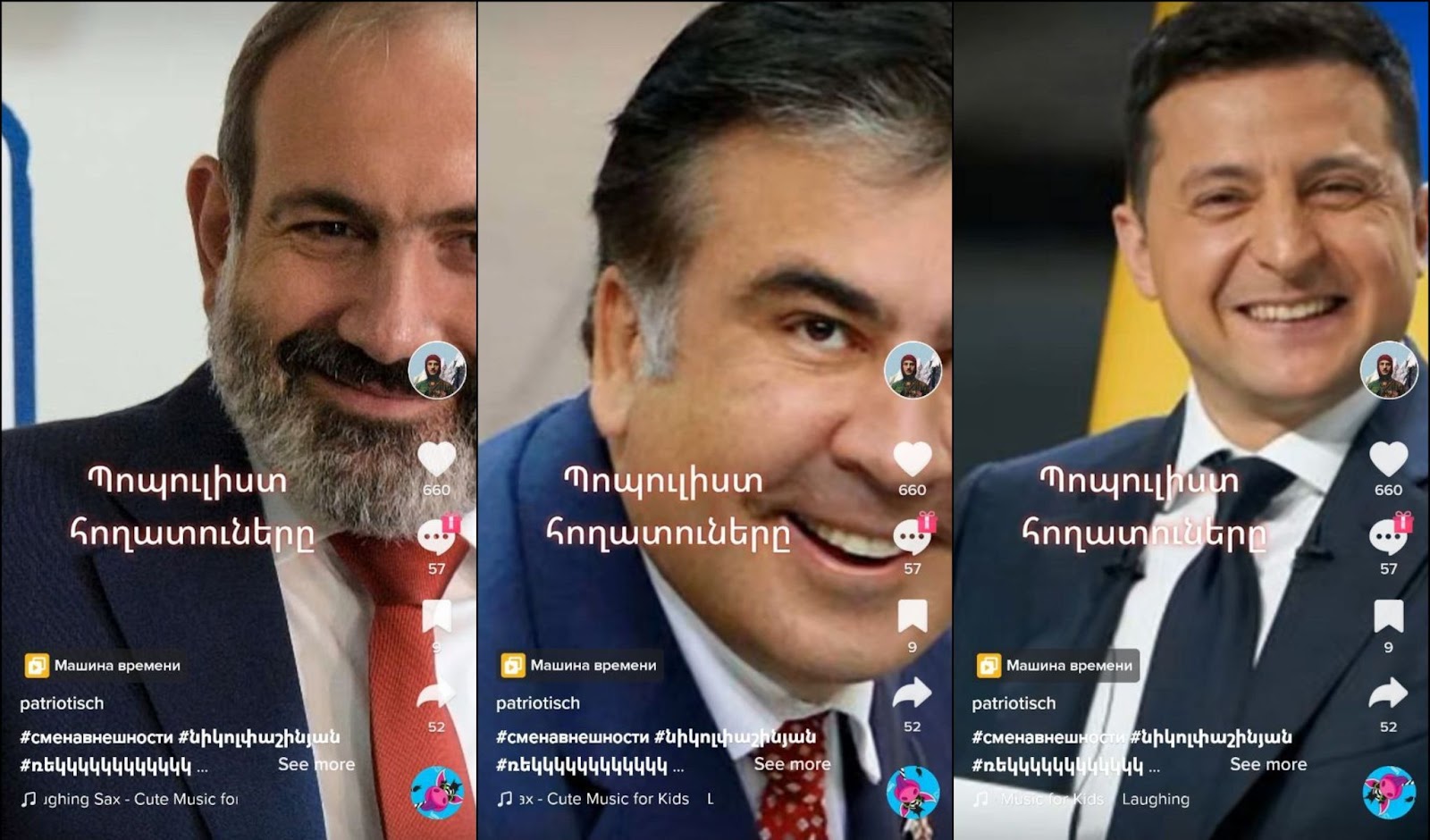 And on February 25, the “hayermiasin” page posted an excerpt from the recording of Pashinyan’s speech in the National Assembly on September 27, 2020, on the first day of the 44-day war, under the video (archived) of Zelensky’s speech, “Today I came to tell you what I am ready for. I am ready to die.” The video ends with Putin laughing. And on the video, it is written “It’s Ukranian Nikol.”

The third page, “irakanutyun_” posted a short excerpt (archived) from a survey on the street, in which a journalist asks a passer-by, “Do you see a similarity between Pashinyan and Zelensky?” to which he replies, “They are the same thing, both are idiots.”

Similar posts also appeared on Facebook. A one-page publication (archived) depicts representatives of the current government of Armenia and public figures with “equivalent” persons of Ukraine. And in the center is the fusion of the faces of Pashinyan and Zelensky. 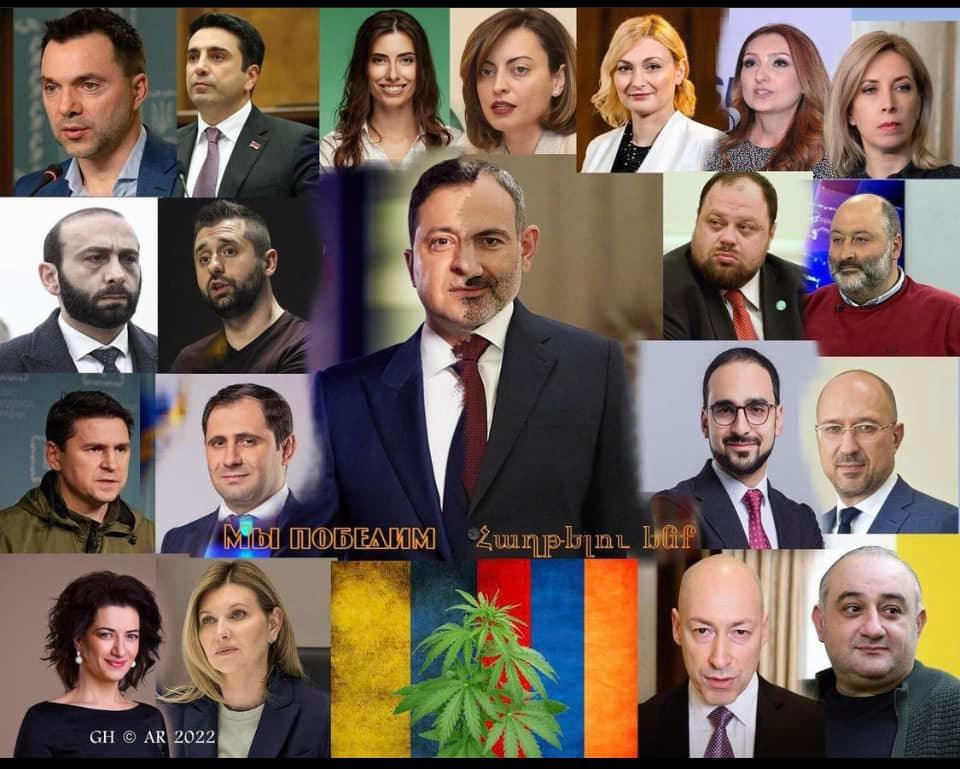 The same post says, “I am sure that many have noticed the similarity between the political leadership of Ukraine and the ruling party of Armenia. The fact is that they are harmful germs grown in the Western, Sorosian incubator. It is a fact that they do not even differ from each other in appearance. Not only the words and actions of the criminal couple Nikol-Zelensky are identical…”

Ukraine is to blame

The long-term goal of the Pashinyan-Zelensky comparison is, presumably, to discredit Ukraine in the form of its current Zelensky-led government and to soften, justify or vindicate Russia’s actions.

In this context, some figures from the opposition field also promote blaming Ukraine for the start of the war. Thus, for example, Vahe Hakobyan, deputy of the “Armenia” bloc and former governor of Syunik, announced in March that Ukraine reached this situation because of its short-sighted policy, and the Russian Federation “had no alternative.”

And another member of the “Armenia” bloc, former director of the “Hayastan” All-Armenian Fund, Ara Vardanyan, repeats Russian propaganda narratives. In May, during the opposition demonstrations, he wrote (archived) that the West is fighting in Ukraine “to the last Ukrainian,” and in Armenia, “to the last Nikol.” He added, expressing his opinion, that “the unipolar world no longer exists, the West simply does not want to come to terms with this shameful defeat. Armenia will be the first country where national forces will come to power after the color revolution.”

* This part of the article was changed on September 2. In the initial text of the article, it was mentioned that “Channel 5” is connected with the leader of the “Armenia” bloc, Robert Kocharyan. There is no such correlation with official documents. The owner of “Channel 5” is Armen Tavadyan. Tavadyan is one of the representatives of the close circle of the second president of RA, Robert Kocharyan.