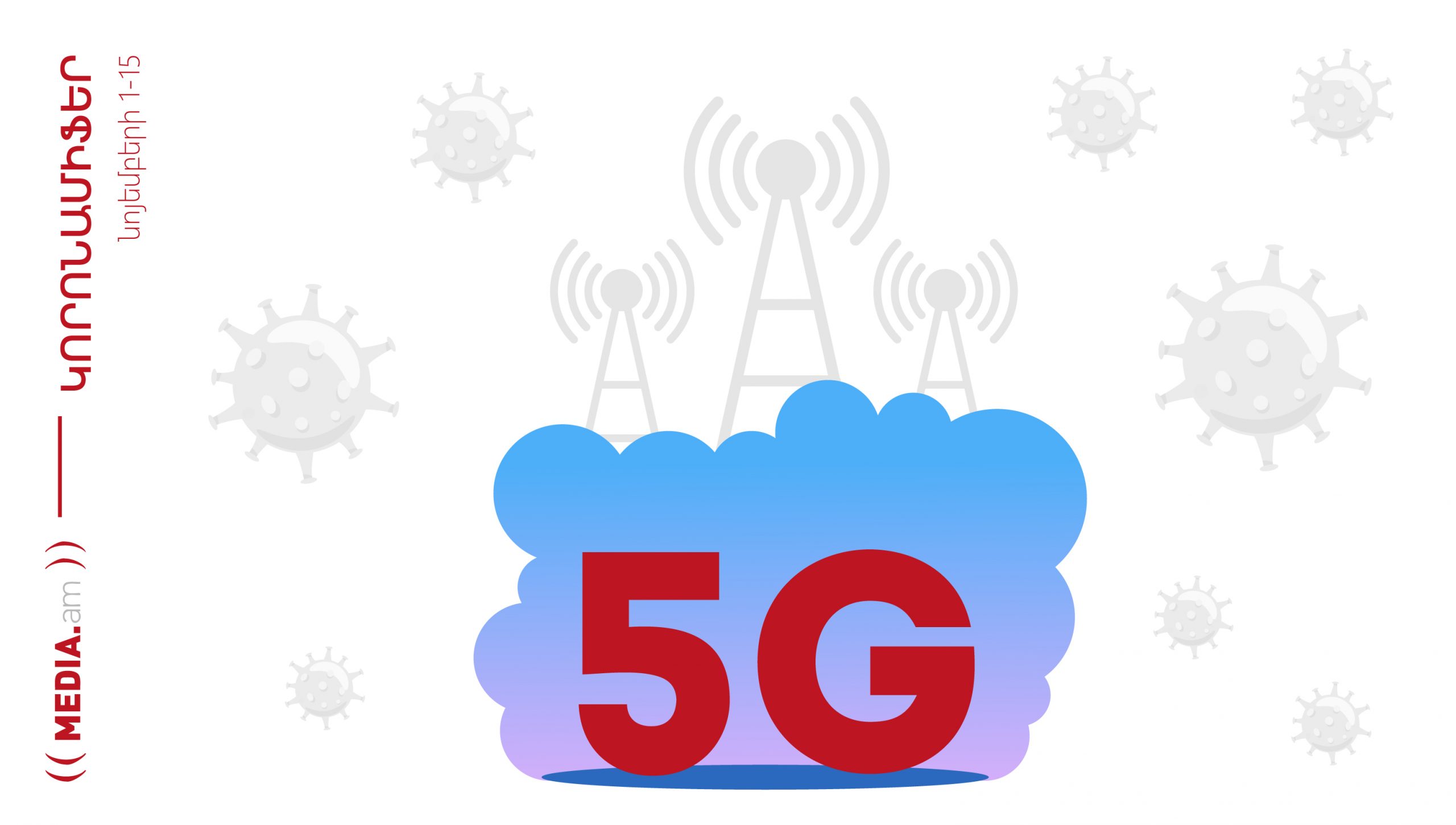 In parallel with the increase in vaccinations against the coronavirus, the anti-vaccination campaign continues. In one case, the current anti-epidemic rules are being presented as a restriction on a person’s freedom, in another case, claims are being made that the number of infected people is increasing after vaccination. Moreover, the topic of 5G towers is being brought to the field again.

“The price of gas for the unvaccinated will increase”

Since October 1 there is a requirement for unvaccinated citizens in Armenia to submit a negative PCR test once every two weeks to their employers. Discussions are also underway to tighten these requirements. Unverified rumors about vaccines are spreading in the context of human rights and restrictions on freedom.

For example, on November 6, “Zhoghovurd” daily wrote that their sources close to the government reported a possible increase in the price of gas and electricity for citizens not vaccinated against coronavirus. According to the publication, the commission on epidemics and vaccinations formed in the government had begun negotiations with “Gazprom Armenia” and ENA on “up to a 100% increase” of the tariff for non-vaccinated people.

This news quickly spread in the media and without being verified was reproduced by a number of websites:  news.am, shamshyan.com, politik.am, yerevan.today, yerkir.am, 24news.am, shabat.am, iravunk.com. The news was also spread by Nune Nersisyan, a doctor known for spreading unverified information about the coronavirus, as well as the founder of the website medmedia.am, Dr. Gevorg Grigoryan. Two days later, in a briefing with journalists, the Minister of Health Anahit Avanesyan said that she does not know where “Zhoghovurd” got the news from and that she is not aware of such a decision (in the video from 1:50).

“In Canada, COVID dies after 6 minutes in the fresh air,” and in Armenia, the air is being poisoned by the enemy

In early November, Arthur Grigoryan, chairman of the National Control System NGO, disseminated a number of conspiracy theories and misinformation.

📢 On November 8, a video with Grigoryan’s participation was shared on the NGO’s Facebook page. After the rain, he collected the dust on his car with a magnet. Grigoryan found connections between possible metals in the air, secret plans of those who spread them and the coronavirus.

He asserted that the level of air pollution in Armenia is increasing after the flights of Azerbaijani or Turkish planes/UAVs in the territory of Armenia. According to him, they spread barium and several other chemical elements in the air, which will cause people to get pneumonia. Based on all this, he concluded, “The CoronaBluff is a game by globalists against certain countries and peoples,” which aims to eliminate the Armenian people and Armenia.

📢 Grigoryan spoke about this at the LiveNews.am studio (in the video from 2:30). It is worth noting that although he does not have the data of laboratory tests of dust or vaccines, he claims that they contain graphene, which begins to act in the human body under the influence of certain radio waves, including 5G towers․ People’s temperature episodically rises.

📢 Although there are no 5G towers in Armenia, he presented proof of their activity – the absence of bees. However, the decline of bees in the world and in Armenia is not new: It is caused by a number of factors, including bee diseases, pesticides used in horticulture, climate change, and more.

📢 Arthur Grigoryan also spoke about the high rate of coronavirus spread in Armenia. He compared the situation with Canada. According to information heard from his friends and relatives, people in Canada are persuaded to leave their homes, because in the fresh air, in the sun, the virus dies in 6 minutes.

The Government of Canada has guidelines for COVID-19 and how to combat it. There is no information on the killing of the coronavirus in 6 minutes, instead, the Canadian government calls on its citizens to maintain personal protective equipment even after vaccination, including wearing a mask in open and closed areas when with strangers. Grigoryan is against wearing masks and getting vaccinated, instead, he suggests fighting against coronavirus with steam inhalation and alcohol.

“People get coronavirus more after vaccination”

In parallel with the surge of coronavirus vaccinations in Armenia, the narrative is circulating that vaccinations do not help, on the contrary, they contribute to the spread of the virus. Proponents of this case have been working to make the actual transcript of this statement available online.

Such an assertion was made by Teresa Mkhitaryan, a well-known Swiss resident, in several cases of spreading conspiracy theories in the LiveNews.am studio (in the video from 1:07:11 minutes). She cites the example of Israel to prove the ineffectiveness of vaccines. She claims that 85-90% of people in Israel were vaccinated, but the most infected were there. In fact, as of November 14, 67.3% of the population in this country has been vaccinated with one dose, only 61.9% of the total, therefore the vaccination data of 85-90% is wrong.

As for the infection, the information being spread is out of context. Such allegations do not take into account the fact that the number of infections in Israel in July-September compared to January 2021, when vaccinations were not widely used, decreased, and the number of serious cases, hospitalizations and deaths also decreased.

For example, if the peak of deaths registered in January 2021 was 101, then since July, a maximum of 56 deaths have been registered. You can see the dynamics of deaths in the attached image. 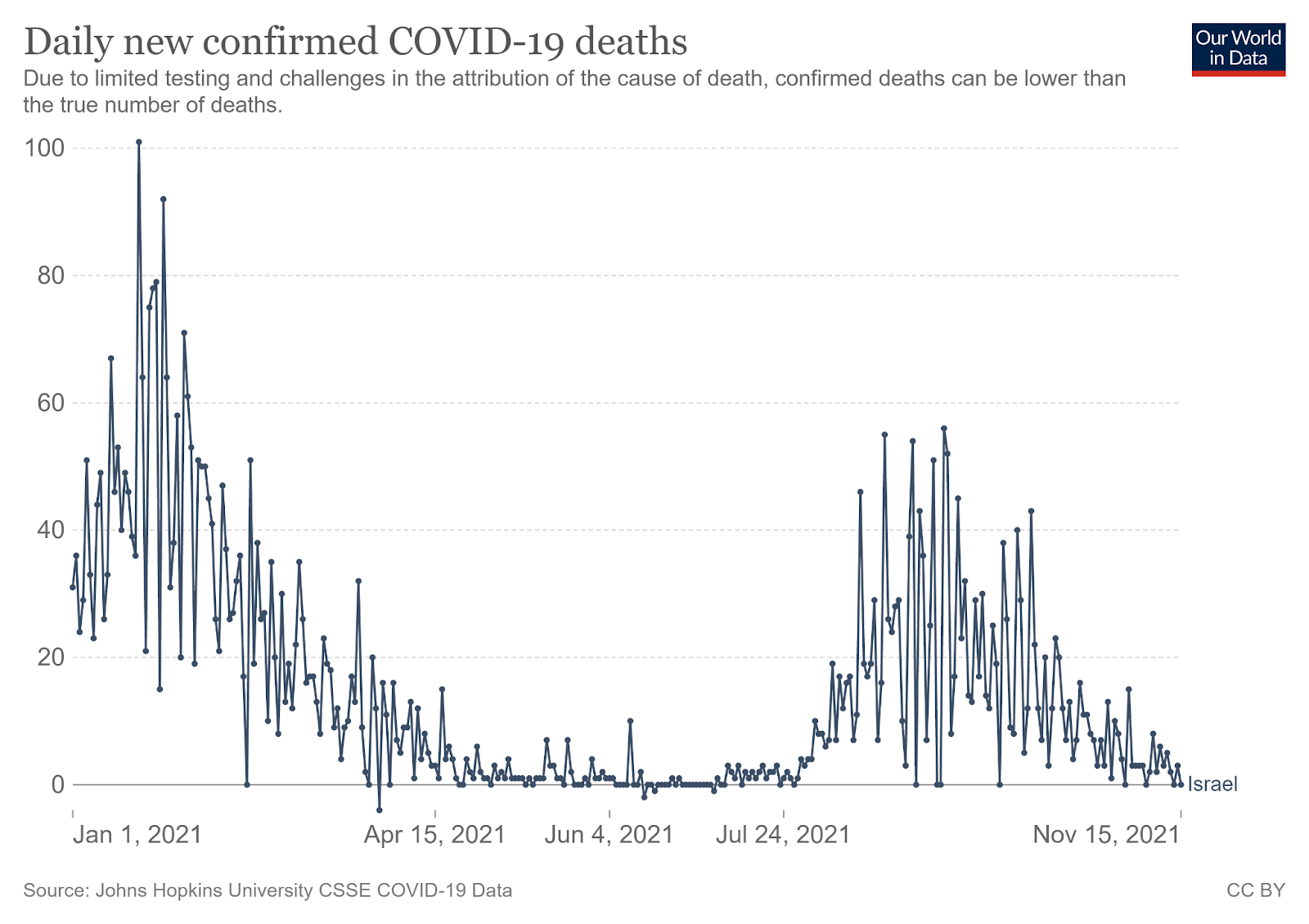 We see the same dynamics in the case of hospitalizations. If in January the peak was 2,390 cases per day, then in July-September it went down to 1,449. 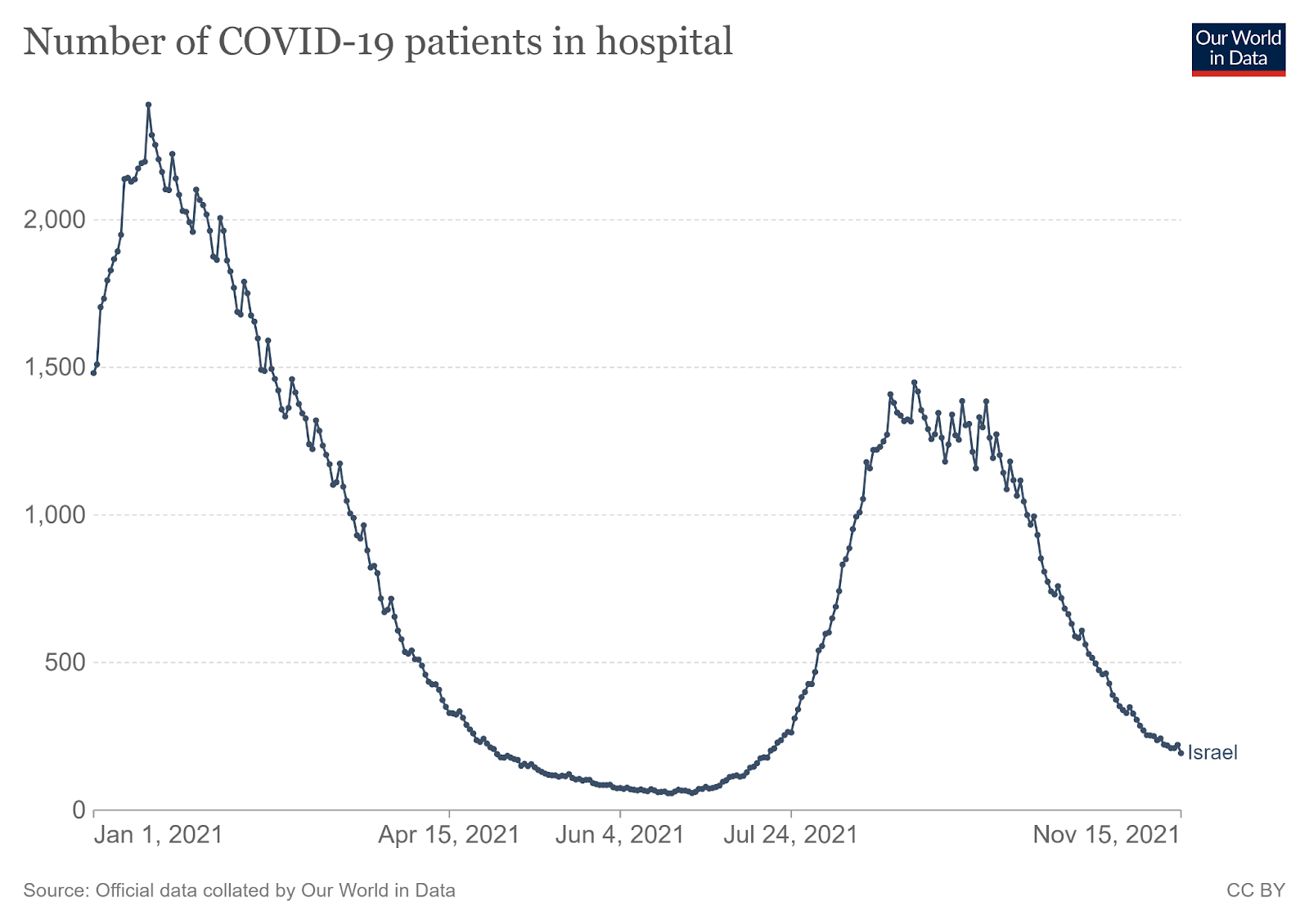 Such an assertion is also being spread by a man who left medicine, Dmitri Harutyunyan.

However, in both cases, a number of circumstances for the spread of the coronavirus are not taken into account, for example, that the Delta strain is widespread in Armenia, the infectivity rate of which is higher.