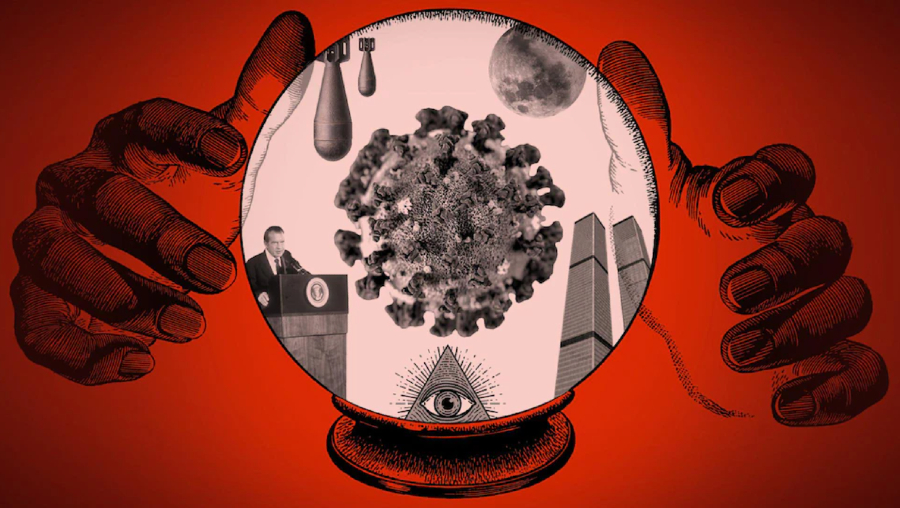 The second half of October did not differ much from the first half in terms of the spread of Corona Myths. Anti-vaccination campaigns were accompanied by the reproduction of repeatedly denied the news, lawyers spread old rumors, have-been doctors invented new myths, and Facebook users expressed their opinions on it all.

Miscarriages have nothing to do with the vaccine

On October 10, Facebook user Karen Chakhalyan wrote that almost 80% of pregnant women vaccinated in the United States ended their pregnancies with miscarriage, premature or abnormal birth. He referred to a study by the US National Center for Biotechnology Information, giving the impression that there is a link between vaccinations and registered miscarriages.

?The data are neither higher nor lower than the usual abortion rates

?There is no evidence of a causal link between the vaccine and miscarriage

?The research is still taking place.

Old news about the use of AstraZeneca

In a conversation with Medmedia.am, Susanna Sargsyan, the founding director of the AGLA Lawyers law office, which opposes vaccinations, told Medmedia.am that 11 European countries have stopped using the AstraZeneca vaccine against the coronavirus. Medmedia.am used that part of the interview as a headline. Media.am checked the lawyer’s statement.

Eleven European countries did stop using AstraZeneca, but the decision was made on March 15, 2021. The reason for discontinuation was the occurrence of thrombosis among 222 vaccinated cases out of 4 million (about 0.006%). Shortly afterward, on March 19, a number of countries, including France, Germany, Italy, Spain, Bulgaria, the Netherlands, Portugal, and Latvia, reversed their decision to suspend AstraZeneca as the European Medicines Agency and the World Health Organization (WHO) confirmed its safety and effectiveness. On July 4, the European Medicines Agency published a new study showing that thrombosis is a very rare side effect of AstraZeneca, which means that the probability of its occurrence is very low.

The church is not against vaccinations

The spiritual pastor of St. Sargis Church in Argavand, Father Grigor Hovhannisyan, posted a video on his YouTube channel, where he questioned the effectiveness of the vaccines. He particularly said:

In an interview with RFE/RL on October 25, the Mother See clarified that the priest’s words were the expression of a private opinion, the church has never preached against vaccinations․ “Many clergymen of the Armenian Apostolic Church have already been vaccinated, including the Catholicos,” said Bishop Vazgen Mirzakhanyan.

Covid through the eyes of politicians

Politicians, and sometimes even political forces, contribute to the spread of Corona Myths. For example, the leader of the “Armenian Homeland” party Artak Galstyan was describing how to avoid getting vaccinated or taking a PCR test, and Mamul.am shared the post.

In a conversation with Armdaily, Karin Tonoyan, the founder of the 5165 Movement, which participated in the 2021 extra-parliamentary elections, said that “the coronavirus is an invented virus and not a natural one,” and the vaccine is a biological weapon used against humanity.

✔️ Rumors about the origin of the virus were formed and developed together with Covid. There is still no news in the latest report published by the US National Intelligence Service about the origin of the coronavirus. There are two theories: leakage from the laboratory (usually referred to as the Wuhan Institute of Virology) and natural mutation during virus transmission (from animal to human). Both versions are considered to be true, but there is no reason to think that it was created and spread intentionally.

The chairman of the “Democratic Party” Tigran Arzakantsyan also expressed his skepticism from the extra-parliamentary opposition about the effectiveness of the vaccine. In a video posted on Instagram by his wife, Natalia Rotenberg, Arzakantsyan rejects the practice of vaccination․

“I will not be vaccinated and I forbid my children to be vaccinated. They are also against it because you leave something foreign in your body, which is incomprehensible today. Nobody knows the pathology yet,” Arzakantsyan answers and adds that having a medical education, he advises not to vaccinate healthy people.

✔️ It should be noted that AstraZeneca, Sinovak and Sinopharm are among the vaccines used in Armenia and are approved by the World Health Organization. Sputnik V by a number of countries in South America, Asia and Europe. The WHO emphasizes that in order for a vaccine to be approved, “a reliable safety assessment is performed during clinical trials and submitted for examination to regulatory bodies.” The side effects of vaccines are well known, but the damage caused by the virus is far greater and more catastrophic.

Another public and political figure, Ara Zohrabyan, who led the Zartonk party in the snap parliamentary elections and has recently spoken out against vaccinations, aired on LIVEnews on October 20.

He stated that this is the first time that people have been given a second identification (a QR code, classification) with the vaccine․

“OK, what is the purpose? It is as if a person is being numbered. I do not know, this is some method of elimination, let alone other things. Well, why do they give it?”

This mysterious narrative about QR codes was continued a few days later by Marina Khachatryan, President of the “Healthy Society” NGO. In a conversation with “Iravunk” on October 30, she said that “the QR code is a control mechanism. Through it, one can be fully informed about a person’s health.” 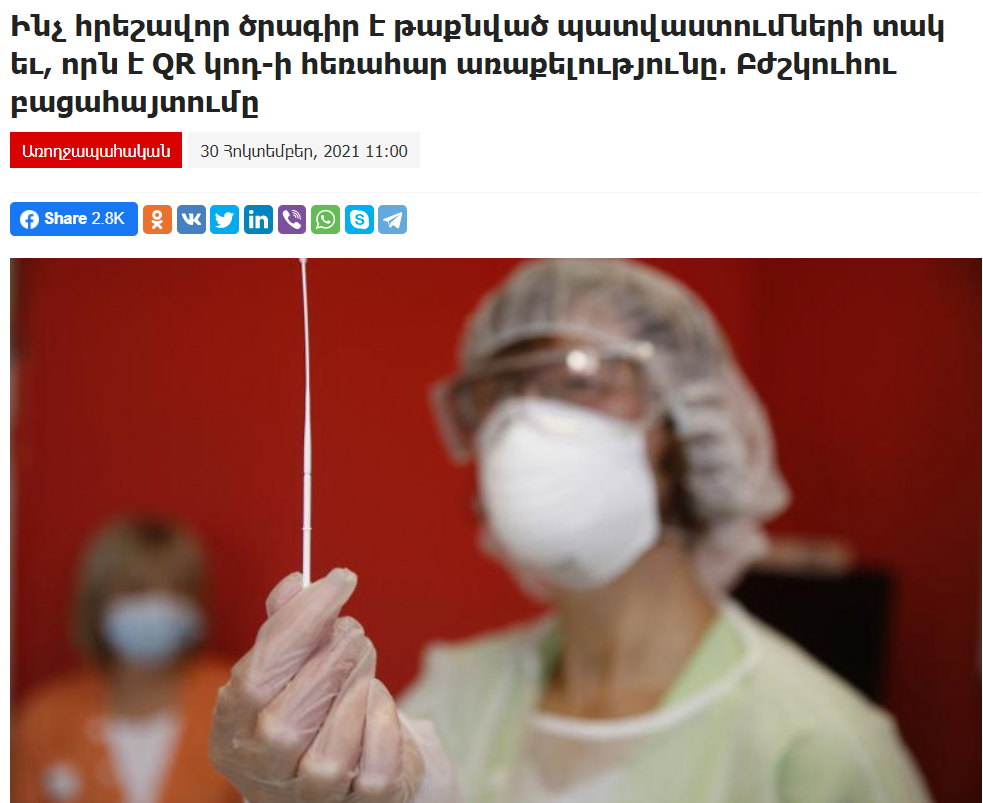 Although the myths about QR codes are just spreading in the Armenian media, they have already been spread and denied in different countries months ago.

The QR code is just a digital certificate that documents the vaccination. It, of course, summarizes personal information – name, date of first and second doses of the vaccine, etc. It differs from the reference issued in polyclinics only in that it is digital and can be stored on smartphones if desired. In an epidemic, QR codes are most needed when traveling so that the certificate can be easily verified.

Moderna and Pfizer can be taken by those over 12

On October 29, the Ministry of Health announced that by the order of Minister Anahit Avanesyan, a change had been made in the guidelines for the use of Moderna, and that children can already be vaccinated with the consent of their parents.

Discussions started on social networks that the minister has no right to change the guideline, many people published the Moderna guideline, where the age of use started from 18.

The “Anti-Epidemic Alliance” initiative published the interview of Russian virologist Vitaly Zverev on social networks, quoting his words ․ “I would not touch children. Now the second stage of experiments is beginning on children. I think that it is not necessary to do it at all. The children overcome the disease easily.” This news was spread by Pastark.am.

Although the Moderna guidelines do state that the age of use starts at 18, on October 25 the company announced the effectiveness of the vaccine for 6-11-year-olds. Moderna and Pfizer vaccines are already being administered to children aged 12-17 children in different countries. Israel started this practice in the summer. A decision was made by the Ukrainian government on October 13, and as of October 26, 13.5 thousand children had been vaccinated. Vaccination of children is also allowed in Great Britain, USA, and many EU member states.

Not all EU countries have closed their doors to Armenia

On October 29, the media reported that “people entering the European Union (EU) from Armenia are banned due to the coronavirus.” The news with such a headline was spread by armlur.am, panorama.am, pilitik.am, lurer.com, armdaily.am (the title was changed), medianews and other news outlets. The reason for the news was that Armenia was on the list of countries at high risk of epidemics, and the EU agreed on common approaches to restrict free movement․ Trips from high-risk countries are not encouraged.

The information, however, was only partially true, as there are EU member states that do not prohibit the entry of citizens of high-risk countries, especially if they are vaccinated. For example, you can travel to Germany, France, Belgium, Denmark, the Netherlands in case of presenting a vaccination certificate. Details can be found here.