False And Refuted News Between February 1-15 * 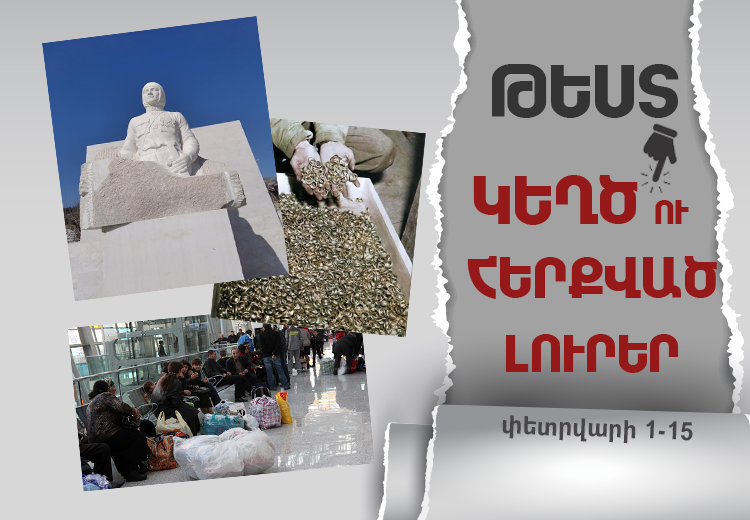 In the first half of February, deputies and several departments misled the public. Earthquake and post-war developments became a source of misinformation. And the most common way to spread misinformation has been to reprint the content on social networks without checking the facts.

Check your knowledge of the misinformation in the first half of February with this test.

Among the returned captives, those who did not return were “found”

News aggregator Mamul.am, a number of other websites – pastinfo.am, ipress.am,  auroranews.am and Telegram channels wrote that “the famous Eric from the video” was among the captives who had repatriated on February 9. The source of the news was the Facebook post of journalist Ani Kochar. She later removed her post and announced in a new post that the captive boy’s aunt had been misinformed. Eric is not among the captives who returned to their homeland.

Such false news was spread about another captive, Lebanese-Armenian Maral Najaryan. Mediaport’s Telegram channel posted and websites reprinted that she had been released from captivity thanks to the Lebanese Red Cross office. Maral’s sister denied the information.

15-year-old Hrachya Nersisyan, who disappeared on January 29, was found dead two days later. It was written online that the reason for the alleged suicide of the boy was the game “Blue Whale.” The Telegram post was spread by websites without any factual basis. The news was discussed in Facebook groups and pages. The 5th channel prepared a report “About the danger approaching us.”

What we really know: The case of the alleged suicide of a minor is being investigated by the Investigative Committee, where they told media.am that a preliminary investigation is underway to find out the circumstances. It also turned out that there had been no case of suicide among teenagers in connection with the “Blue Whale” or other internet games until now. In this case, despite the rumors, there is no evidence that the alleged suicide of the minor is related to an online game.

It turns out that the photo published by Zohrabyan appeared on the net earlier, at least 5 years ago. The same picture was published on Azerbaijani websites in 2014. The deputy has already deleted the post.

What Anush Begloyan said was distorted, and she herself distorted it while commenting on what she said

The statement made by “My Step” faction MP Anush Begloyan during the video conference of “Border ZONA” was qualified as “anti-Armenian.” The websites, repeating each other’s content, wrote that she said, “it does not matter who started the war, whose historical land it is.” News.am further edited the idea: “…who attacked first…”

In fact, the literal translation of Begloyan’s thought is this: “We must look forward, not return to the endless discussion of who was first, whose historical lands they are, (make) historical references, etc., because, as you know, Armenians are the best at quoting ancient historians and making historical references. I do not want to get into it because both sides have been doing it for 30 years, and that has led us to war.”

During the briefing with the journalists in the parliament, Begloyan clarified that an idea was attributed to her, which she did not say. Indeed, Begloyan did not speak about the side that started the war first.

However, while commenting on her speech, Begloyan distorted it: As she said, “30 years of these talks brought you [Azerbaijan] to war.” In response to the journalist’s clarification, Begloyan neutralized the speech, as if she said that those conversations “led to a war.”

In fact, she said, “We were brought to war.”

After the 4.7 magnitude earthquake registered in Armenia on February 13, the media and mushroom websites wrote that the Turkish military base on the slope of Mount Ararat was destroyed by the earthquake, there were explosions, there were casualties. The araratnews.am website published about this, referring to a “Russian telegram channel.” The item has already been removed.

Infocom found out that the information is false. The picture in the publication is old. It was taken in October last year after the earthquake in the Aegean Sea.

The Ministry of Defense is silent about border incidents

The official reports of the Ministry of Defense of Armenia state that on February 11, 12 and 13 no border incidents were registered along the Armenian-Azerbaijani line of contact. However, in the Syunik region, along the line of contact with Azerbaijan, there were at least two incidents on the days mentioned.

The Khndzoresk village municipality informed that on February 11, most of the grazing herds of villagers were taken away by armed Azerbaijanis. The problem was solved later. On February 13, shots were heard in part of Agarak and Yeghvard villages. The video depicting it was published by the Human Rights Defender of Armenia Arman Tatoyan.

The child and family support center has been operating in Kapan for a long time. The ministry is misleading

The Ministry of Labor and Social Affairs announced on January 14 that a child and family support center will be established in the Syunik region. Fip.am found out that this message is misleading, as the center has been operating since 2018. By the decision of the government, only the organizational and legal form of the center was changed, and the crisis component was increased.

The statue of Nzhdeh is in its place

From February 11, rumors were being spread that the statue of Garegin Nzhdeh had been dismantled (or would be) in the Artsakh city of Martuni at the request of the Azerbaijanis. Independent MP Arman Babajanyan announced this from the NA tribune.

Nver Dadamyan, a member of the Martuni community council, denied the news about the dismantled statue from Martuni with facts. He informed Media.am that the photos were taken at the time of it being installed, the statue is in its place. He also confirmed that there are rumors in the city to dismantle Nzhdeh’s statue.

The rings were not for the victims of the war

On February 4, a photo of rings was posted on “A.Baghumyan” Facebook page with the attached post: “These are the wedding rings that belonged to the soldiers who died in the second war. How many love stories have been left unfinished!” The publication has more than 300 shares.

However, a retrospective search of the image reveals that the rings did not belong to the soldiers killed in the second war, but to the Jews who died in the Holocaust. They were found near the Buchenwald concentration camp after it was liberated by US troops.

The news was reprinted by various Azerbaijani media outlets, with reference to which the news appeared in the Armenian field. American scholar Suren Sargsyan was the first to write about this, with whom the post was shared by more than a dozen websites.

Media.am found out that the US Embassy in Baku had made only one post about this meeting on Twitter. There is no word in it about congratulations on the restoration of Azerbaijan’s territorial integrity. And the US Embassy in Armenia informed that the descriptions of other parties and sources are not the official position of the US.

🔴 On February 3, the Minister of Environment Romanos Petrosyan demanded that News.am publish a denial. One of the news on the website said that Petrosyan and his wife were in a relationship with the newly appointed principal of Abovyan High School No. 1, Karmile Arakelyan. Petrosyan claims that the information does not correspond to reality and is slander. He demands to publish a denial, otherwise, he informed that he will apply to the court.

❌ “There are no grounds for rumors that, for example, the Krkzhan, Ajapnyak districts of Stepanakert or the village of Ivanyan in Askeran will soon be inhabited by Azerbaijani families,” assured the Artsakh Security Council Secretary Vitaly Balasanyan. He also denied the news that Azerbaijanis are shopping in Stepanakert shops.

❌ Artsakh President Arayik Harutyunyan considered the rumors that “we will disband the army and the Ministry of Foreign Affairs in Artsakh, the other, that we will abandon the Red Market-Shushi road, the third, that we will put an Azerbaijani flag in Stepanakert, and so on and so forth” as outlandish.

It should be noted that in December 2020, the rumors about Artsakh giving Russian the status of the second state language were denied. And in February 2021, the Artsakh parliament is going to make changes in the law “On Language,” after which the official language of Artsakh will be defined not only literary Armenian but also Russian.

❌ Yerevan Mayor Hayk Marutyan denied the rumors about his resignation and informed, “I am fulfilling my promises given to the people.”

❌ The Mother See denied the news that Catholicos of All Armenians Garegin II along with two high-ranking clergymen had a car accident on the Yerevan-Echmiadzin highway.

❌ Rector of the Yerevan State Institute of Theater and Cinema Lilit Arzumanyan said that the news of uniting the Pedagogical University does not correspond to reality. Protests were held at the university on this occasion.

* This article was edited on February 20. The part of MP Sofya Hovsepyan on manipulating the amendments to the HIV law was removed from the material and the test.

We have taken this assertion from the publication of the “Fact-Checking Platform” with a corresponding link. However, a correction was made later on the source site with the following content.

Hovsepyan stated that according to the draft, a 14-year-old child can go and pass an HIV test on their own without a parent or legal representative and get the results. The “Fact-Finding Platform” partially quoted Hovsepyan’s statement and checked only the claim of 14-year-olds that they could take an HIV test on their own, and omitted the part about getting acquainted with the results of the research.