The Russian Sputink’s Audience In The South Caucasus

The DFRLab Research Center surveyed the audience of the Russian state-run Sputnik agency in Armenia, Georgia, and Azerbaijan, and compared it with local independent media. This research has revealed some interesting facts. For example, 99% of Sputnik Armenia visitors come from Russia, and 20% of Azerbaijani Oxy.az traffic comes from Armenia.

Media.am presents a short version of the research.

Local media have a larger audience than Sputnik

During the months of the study (May-July 2020), local media outlets were visited 25.5 million times, and Sputnik websites – 19 million times. However, the traffic of Armenian Sputnik was significantly higher than that of CivilNet. In Georgia, Sputnik’s traffic was inferior to the local media, and in Azerbaijan – slightly higher. 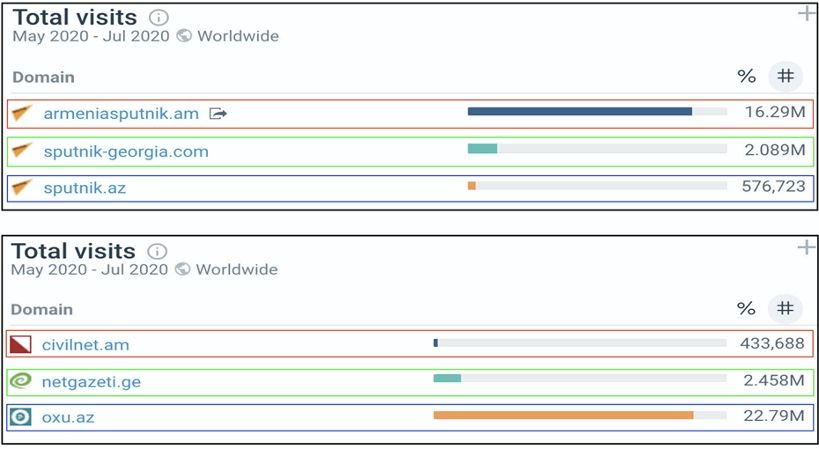 Both local media and Sputnik prefer Facebook to social networks. More than half of CivilNet and Netgazeti traffic comes from Facebook, while only 6% of Oxy.az visits come from Facebook. In the case of Sputnik, only a significant part of the visits to the Georgian website (41.67%) came from the social network, while the Armenian-Azerbaijani websites were accessed by Facebook only by 3.72% of users and 9.40%, respectively.

60% of the visits of three Sputniks in the South Caucasus come from Russia, and in the case of Sputnik Armenia, the overwhelming majority of visitors – 99% – come from Russia.

It is interesting that 20% of the visits of the Azerbaijani Oxy.az in May-July were from Armenia. And the users of Azerbaijan and Georgia mainly did not visit the media of neighboring countries. 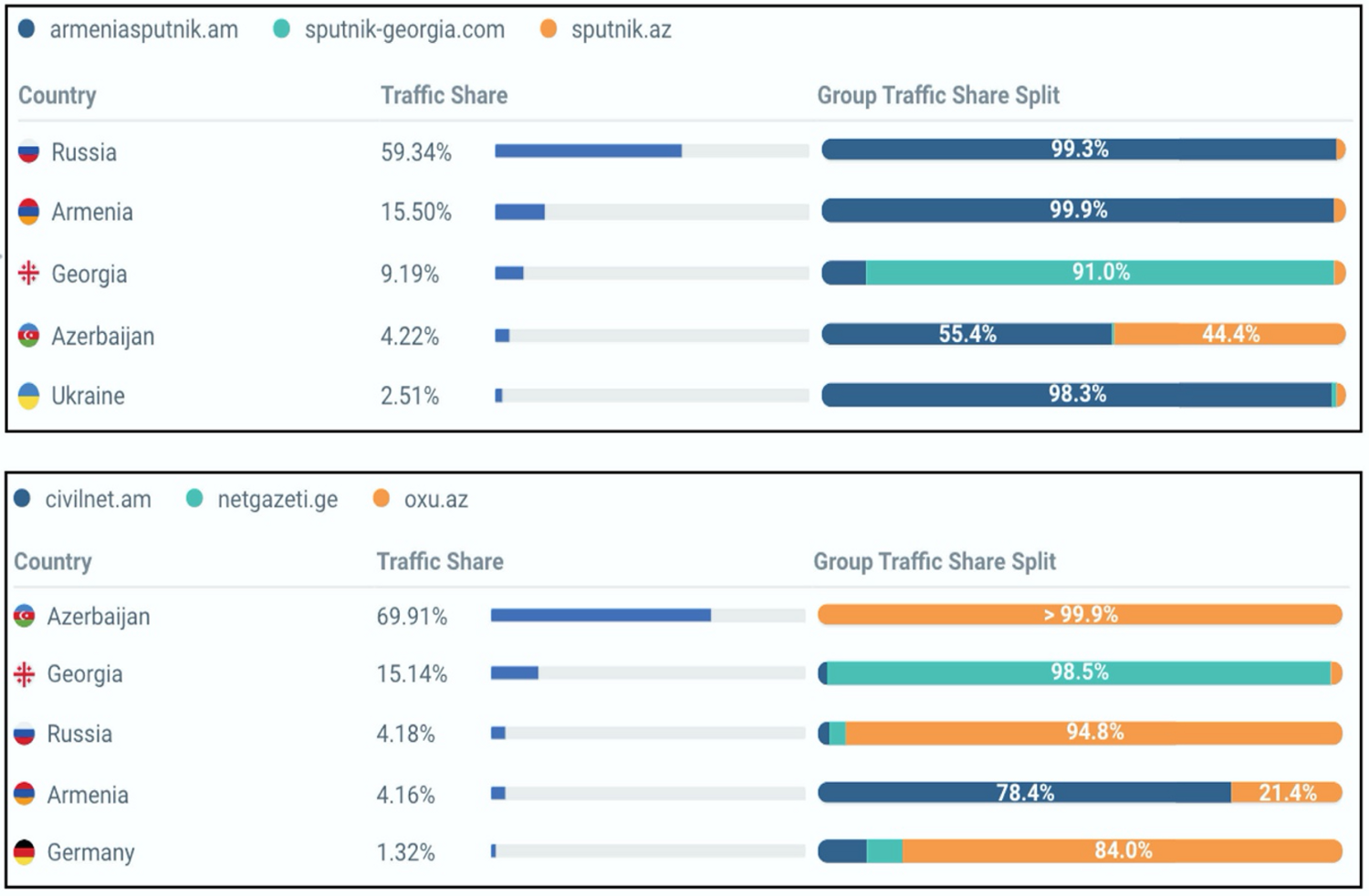 Between 2019-2020 the total audience of the three Sputniks in the South Caucasus was 25 million. Local media, however, are more popular, their total audience was 40 million.

On Facebook, that number was 18 million for Sputniks, almost double that for 35 million local media outlets.

The image on Twitter is different: Sputnik has 8 million social media networks and about 5 million local media outlets.

DFRLab measured the response of users to Sputnik, Facebook and Twitter. In the case of Facebook, this means that the center measured the comments, shares, likes and reactions (angry, surprised and other “likes”) left on Sputnik materials. Responses, retweets and likes were measured on Twitter.

In this case, too, the local media were more popular than Sputnik. During the study period, local websites had 5.5 million responses, and Sputnik 1 million. 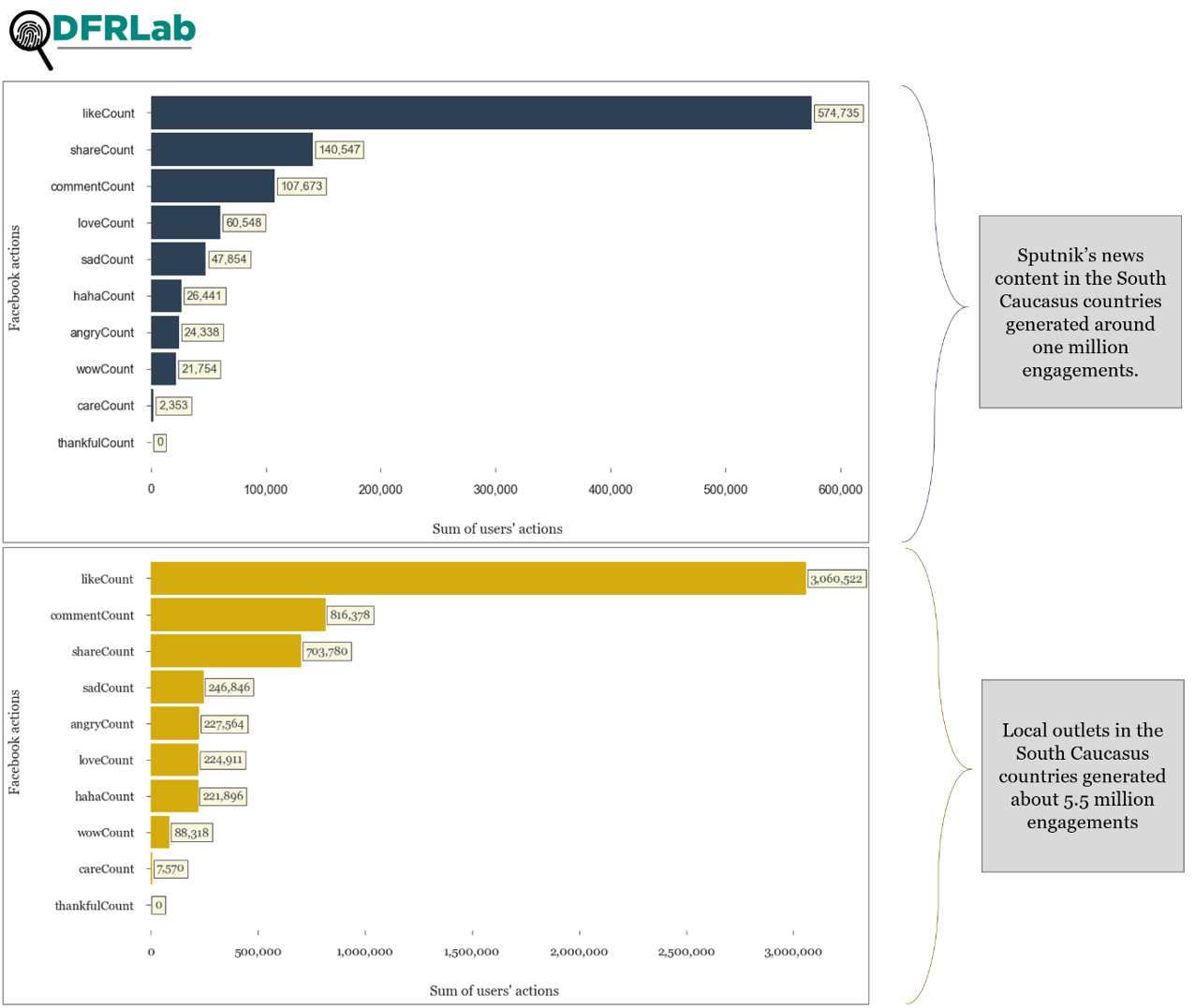 CivilNet received the least response in the local media – about 546,000. 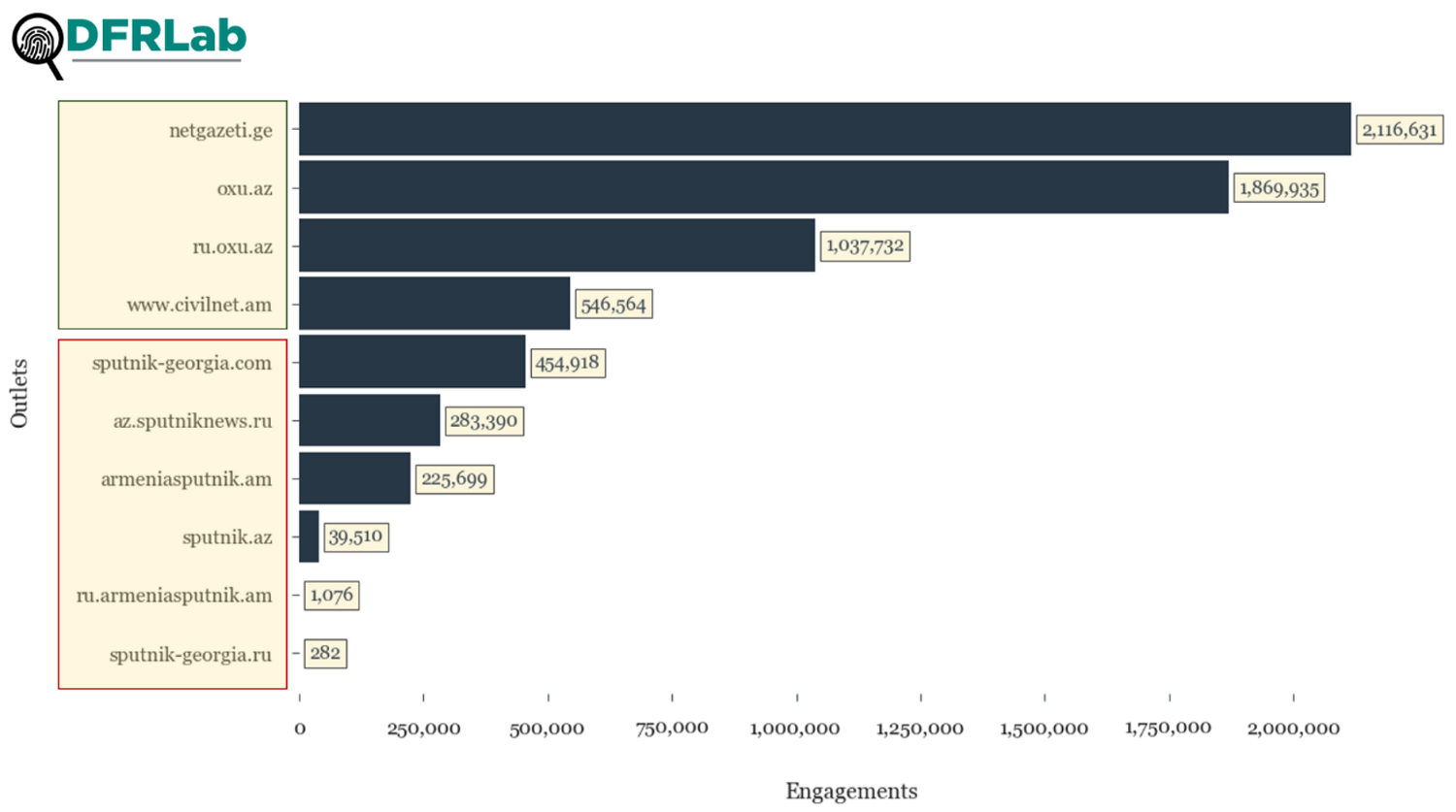 Why is the study of the reach of Sputnik important?

DFRLab states that Sputnik has spread false information in different years, including in the South Caucasus. For example, Sputnik Armenia and Sputnik Georgia have spread misinformation that the coronavirus is a biological weapon. Sputnik also used a network of fake accounts to spread its content more widely, violating Facebook standards.

Moreover, the US accused Russia of interfering in the presidential elections. According to Special Prosecutor Robert Mueller, the Kremlin has used Sputnik and RT media to influence American voters towards this or that candidate.