From social platforms, especially Facebook, the title of the article is what transports the reader to the site. 35% of 1in.am’s audience comes from social networks, 98% of which come from Facebook (source: similarweb).

Under what headlines does the media attract the reader’s attention? This time we studied the headlines of 1in.am. According to Similarweb.com, it is in the top five most visited Armenian news sites.

In the three days of our observation (August 5,6,7), 355 domestically produced, 145 international, and 19 materials taken from local media were published on 1in.am. There were many videos and live broadcasts of their own production.  They include 170 official messages and 21 social network posts. 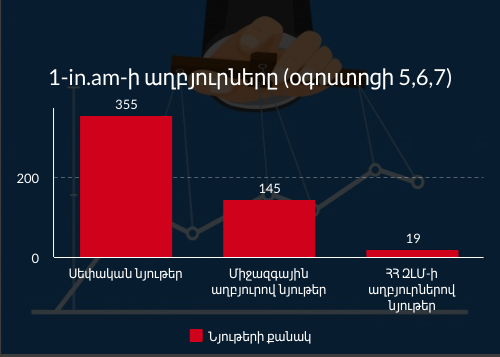 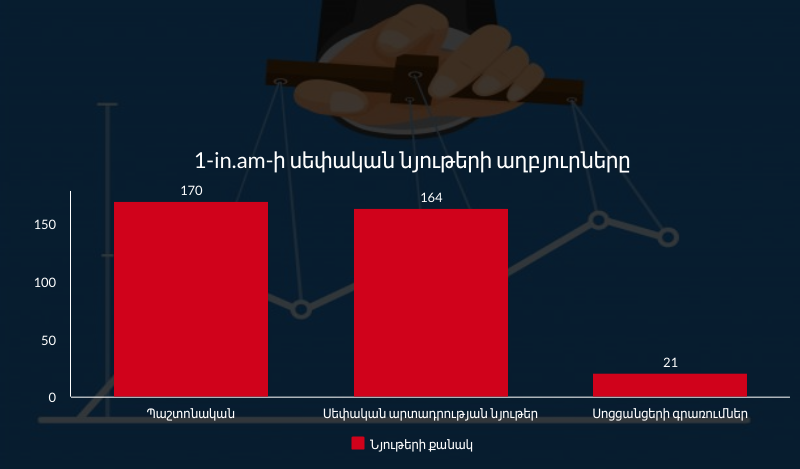 In the materials taken from other media, 1in.am mainly mentions the source, but without an active link. The editor-in-chief of the website Astghik Sapeyan clarifies that not giving an active link is the editorial decision․ “There are materials we translate from two sources, that’s why we decided not to mention the source, so as not to give rise to misinterpretations.”

When you try to say too much, but the result is sometimes confusing

We find a lot of extensive headlines on 1in.am. They mainly consist of two parts. In one part there may be an excerpt from the speaker, in the other part a description, or opinions of different speakers in two parts.

According to the editor-in-chief of the website Astghik Sapeyan, if two speakers have an opinion, they try to summarize the words of both in the title. However, this often makes it difficult to understand the title․ It is not clear what the material is about. As a result, the media wants to say as much as possible in the headline, but sometimes it confuses the reader even more.

Our throat was tied by a noose, when they wanted to they would give it slack, when they wanted to they would tighten it: Ashot Zakaryan’s military friend is proud of his appointment. During the conversation, they also spoke about the persecution of the previous authorities. In the first part of the title, there is an excerpt from Ghazaryan’s speech regarding those persecutions, in the second part, the occasion for that information. The two ideas with different chronological contexts in one title, instead of clarifying the content of the material, confuse the reader more.

Standard noisy arrest: What to do to not fall into the trap of the complex. The first part of the title talks about an arrest, but the second part remains unclear. It is not clear from the title what kind of arrest and what kind of complex it is, it turns out that the second part is more confusing. To understand the confusion, the reader follows the link. This can be explained by the fact that the title is written for analytical material, but the formulations in the material are complex and difficult to digest. Besides, the name of the author of the analysis is not mentioned, which is not specific to 1in.am.

The title is bait, media literacy is the way out

Bait titles use various tricks to arouse the reader’s interest, which is acceptable if they do not play with the reader’s emotions, do not hang unnecessary questions in the air, and do not promise information that is not in the material.

“Roma” was “eaten alive.” Will Henrikh Mkhitaryan return to London? While reading this title, we expect to get the answer to the question from the material. The author gives the reader detailed information, but when we get to the part where we have to get the answer to the question mentioned in the title, we read the following, “Will Mkhitaryan return to London?” We will get the answer to this question in the near future. “In any case, there is a high probability that” Roma “will hire our football player for a year, on the condition of obtaining his full transfer in 2020.”

Paul McCartney has announced the reason for the disbandment of The Beatles. The title suggests that the article will reveal the reason for the break-up of The Beatles. Of course, the article says that it was due to a dispute, but there is nothing about what the dispute was․ According to the musician, The Beatles were a “family.” “And there are quarrels in the family, there are disagreements. Some want something, some want something else. So, I think the dissolution of the group took place after such an argument.” It turns out that the reader gets a portion of what he was “promised” in the title.

Bill Gates predicted a disaster worse than the coronavirus. Bill Gates talks about the ecological catastrophe and in the article he compares it with the coronavirus in just one sentence, the very words of this sentence are put in the title. As a result, the main message of the material is pushed to the background in the title, and the comparison on a sensitive topic appears in the center of attention.

Kocharyan is an ordinary traitor: is the mistress of the Russians: Suren Sargsyan. Insulting and qualifying titles are mostly taken from someone else’s direct speech. This relieves the media outlet of responsibility, as it is not the author of the insulting words, but it does not release the obligation to respect the reader, not to spread insults (that is, in the headline).

Omissions in the title

The omissions of the titles are easier to notice. The misuse of professional terms especially can completely change the meaning of what is said.

The Lebanese authorities have ordered the arrest of the entire Beirut port administration. The title uses the term legal arrest, however, the article reads: “The Lebanese government has ordered the whole administration of the port of Beirut to be placed under house arrest.” The terms arrest or detention are different legal processes.

Both sides of the coin

Only one positive or one negative opinion on one topic can prevent one from judging reality impartially. Here the opinion of the other party can help.

In the examples given, we see the main theme of those days, Amulsar. During the day we often come across such materials on the website, the headlines of which are the sharp, accusatory words of those who oppose the exploitation of Amlusar. In other words, opinions are titles that are mainly in one direction. The balance is not kept, we essentially do not see the reaction of the other side.

There are many headlines in the media, which are individual opinions, on this topic, and not only. Note that the title often does not mention the name of the author:

An attempt is being made to downplay the role of the 2000-year-old Armenian Church. For example, in this headline, it is not understood whose words they are, the reader can attribute it to the media.

Summary of the series

This article is the third in a series of “Titles that attract readers.” In previous articles, we studied news.am and shamshyan.com.

All three sites use different tricks in the headlines to attract the reader. The general conclusions of the studies of the three sites are presented in an animated video.