False And Denied News Between August 16-31 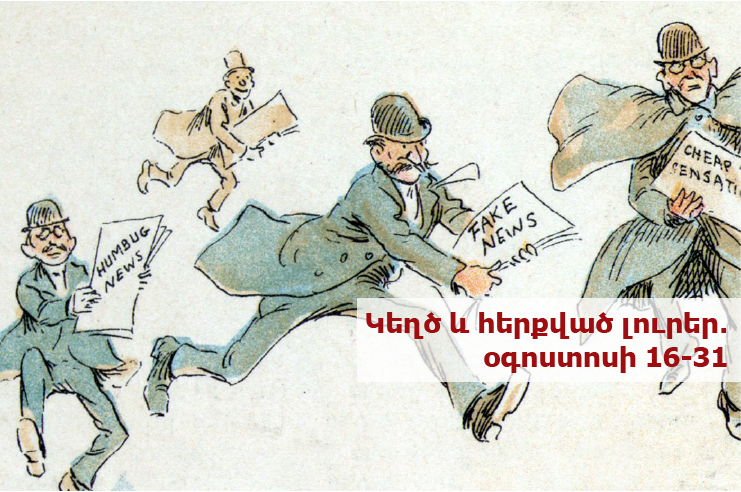 In the second half of August, the news of the resignation of the Minister of Health and its denial occupied the news agenda for several days. Television channels provided incomplete or misleading information about the post-election protests in Belarus. Former President Serzh Sargsyan made false statements during a press conference.

Arsen Torosyan (had not) resigned

Active Facebook user, The Minister of Health deactivated his personal and official accounts on August 24. This gave rise to rumors about his resignation. The suspicion of resignation seemed more credible against the background of the spokesperson of the Ministry of Health not commenting on the news. Then the news of the minister going on vacation was received.

At the same time, the media “found” reasons, motives, goals for resignation on social networks.

Two days later, on August 26, the spokesperson of the Ministry of Justice, Alina Nikoghosyan, announced on Facebook that “Arsen Torosyan has not submitted his resignation and is not going to. After his holiday, the minister will return to normal work.”

Torosyan personally denied the news of his resignation. In a conversation with Factor.am, the National Security Service denied the news that Torosyan was invited to the NSS.

Marina Khachatryan, who was looking for 5G towers that had been secretly installed in Yerevan in May, created another scandal in August. On August 22, she posted a request for information consisting of 9 questions sent to the General Director of “Astghik” MC. Under the title “According to the available information,” she wrote that “in some cases, the semen belonging to Jews imported from Israel is being used for in vitro fertilization” in the MC.

Khachatryan also demanded that the NSS make disclosures, “It is enough for us to receive information from various sources, to live in terror and to fight against every filth with our own hands.”

The medical center publicly informed that it does not import semen from Israel. “It is a lie, misinformation, an insidious fabrication, so we consider it pointless to address all the other issues arising from it in general,” the MC stated. It informed that if the topic continues to be raised, “people who will try to tarnish the good reputation of Astghik MC” will be called to accountability.

After the announcement of the results of the presidential elections in Belarus, large-scale bloody demonstrations took place on August 9. Violence was used against arrested citizens. The work of journalists was hindered, the internet connection was disrupted, and in the demonstrations, the President of Belarus saw the meddling of foreign forces.

Media.am has studied the coverage of these events by Armenian TV channels until August 16.

It turned out that during that time, Kentron TV, owned by PAP leader Gagik Tsarukyan, twice covered the rallies against Tsarukyan’s “good friend and fellow” Alexander Lukashenko. Public Television missed some important episodes.

And Channel 5 allowed two factual inaccuracies in one piece. During the week, they continued to claim that the first victim of the protests had died from the explosion of an explosive device in his hand. Meanwhile, the death was captured from the shooting of the security forces, which was later confirmed by the journalists who had done a fact-check.

Channel 5 also started repeating the Russian propaganda theses about the demonstrations, and an extremist activist was introduced as an expert.

The third president Serzh Sargsyan announced at a press conference on August 19 that an Azerbaijani aircraft did not reach Stepanakert during the April operations in 2016.

“No, no flying device appeared in the sky of Stepanakert, those destroyed drones were at a maximum distance of 10 -11 km from the first line,” Serzh Sargsyan stated. The “fact-checking platform” discovered the opposite on the same day.

Another statement of Sargsyan where he said that according to their polls 80% of the society considered that Armenia had won the Four-Day War, also did not correspond to reality.

❌ The Minister of Education and Science Arayik Harutyunyan denied the content of a table that is being circulated, which allegedly presented the standards of sexual education of children in schools. “I would like to inform you that this document has not been, is not, and will not be in our educational programs. It was never even discussed orally, let alone distributed,” the minister wrote.