The Armenia-Azerbaijan border and Artsakh-Azerbaijan line of contact is under control of the armed forces, but cases of border crossings are recorded. Those can have socio-political motives, or be the result of getting lost of a shepherd, who took out the flock to graze, or a resident of a border area. Border crossings are also registered among the servicemen.

This is a serious issue, because sometimes it takes years to repatriate a citizen. In some cases, people simply do not return alive.

Օn July 15, 2020 the latest case of a border crossing was published. While active hostilities were conducted in the Armenia-Azerbaijan border, a video was published on Azerbaijani websites, in which Narek Sardaryan was shown. Sardaryan is a 30-year-old resident of Nerkin Khndzoresk, Syunik region of Armenia, who had gone missing since July 8.

Media.am decided to explore the database of press releases of the International Committee of the Red Cross (hereinafter referred to as the ICRC) to find out the dynamics of repatriations.

We chose to collect data form the publications of this international, independent humanitarian organization, as repatriations have been carried out under their auspices since 1995, and this information is available on their website in the format of press releases.

What do the data tell us?

After the 1994 ceasefire, large-scale repatriations took place between 1995-1997. Following a break of almost three years, the repatriation resumed.

The first case was on September 12, 2001, when the Armenian side returned two people to Azerbaijan, a serviceman and a civilian, under the auspices of the ICRC.

55 people (including corpses) have been repatriated since the 2000s. Most of the repatriations were facilitated on the road between Ijevan in Armenia and Gazakh in Azerbaijan. In 3 cases the place is not mentioned.

After the ceasefire, the borders have been closed. The farther we get from the Karabakh war in chronology, the more the gap between Armenians and Azerbaijanis grows.

The 1995 press release is the only one where we read that the ICRC delegate accompanied the repatriates from Yerevan to Baku.

Zara Amatuni, the head of the ICRC’s communication and prevention programs, says if necessary, there is still no problem for a delegate working in Baku to come to Armenia, and vice versa.

As for the repatriations, Amatuni explains, “The organization acts as a neutral mediator; it facilitates handover of a person to the homeland only if there is an agreement with the relevant authorities and the person. If the person does not express willingness to return, we have no right to organize the repatriation against his/her will.”

Those who refuse to go back, but consent to be resettled in a third country are dealt with another international organization – the Office of the United Nations High Commissioner for Refugees (UNHCR). We found only one such case since 2001, when an Azerbaijani citizen was transferred to a third country.

In addition to arranging repatriations, ICRC representatives, as neutral and independent mediators, visit persons who had crossed the border throughout their stay on the other side.

However, it is not always possible to bring a person back alive. Two Armenians died in custody in Azerbaijan. 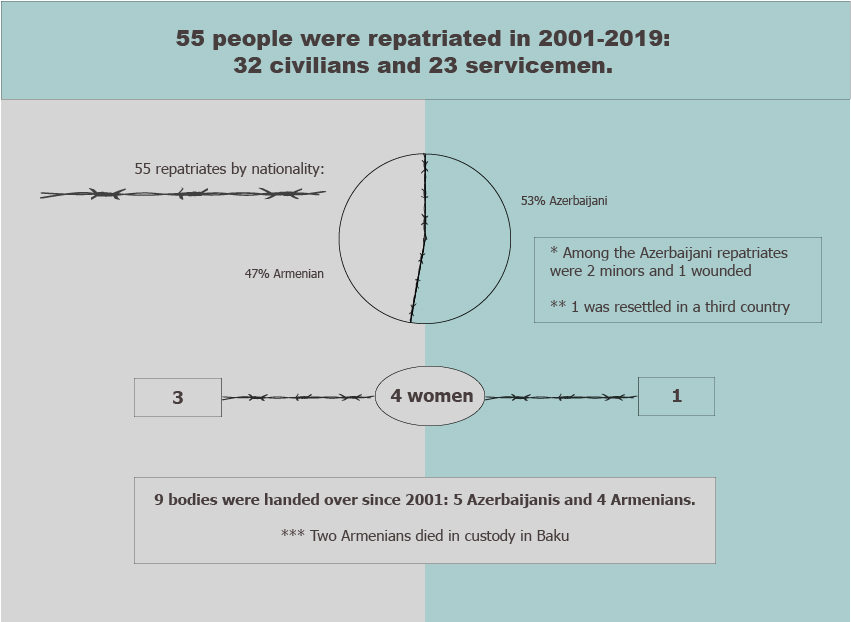 Since the end of 2014, the ICRC has been mentioning the dates of crossing of the border. According to these data, it takes from a few days to several years to repatriate a person.