False And Denied News Between July 1-15 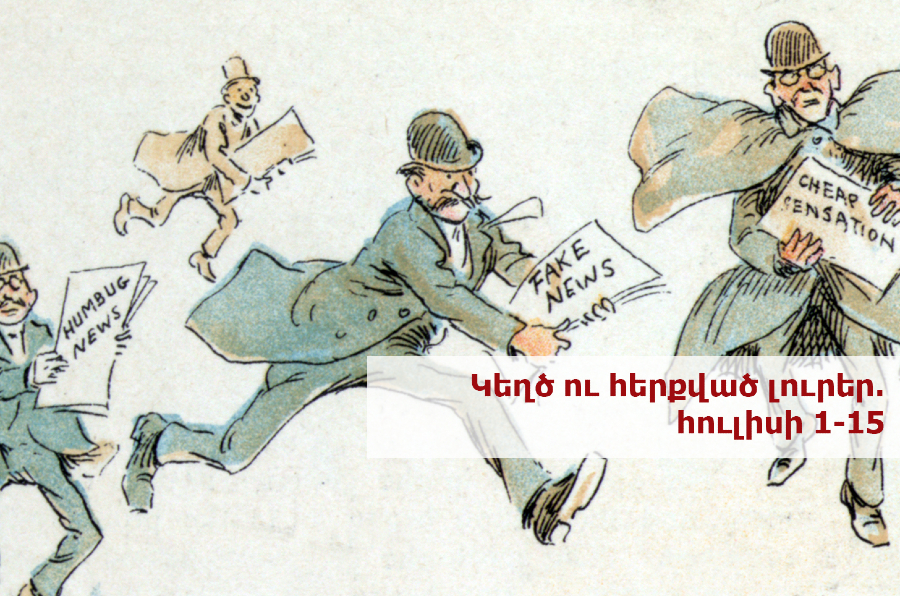 In the first half of July, the press wrote that the humanitarian mission of the French doctors had cost Armenia a lot of money and that Public Television was spreading “anti-Russian sentiments.” Against the background of the aggravation of the situation on the Armenian-Azerbaijani border, the false news spread from Azerbaijan increased.

The military tension on the Armenian-Azerbaijani border that started on July 12 was also accompanied by an information attack. DDoS attacks started on state bodies and Armenian news websites.

At the same time, false news was spread in the press. Thus, the Azeri websites started publishing the names of the victims of the April war, writing that Armenia has dozens of victims.

A picture of the bombing in Syria was spread under the context of the losses sustained by the Armenian side.

In another case, a video of the arrest of extreme conservative activist Narek Malyan was spread. That video was presented as evidence of the escape of an Armenian officer from the front.

Wrong information was also published in the international press. Russian gazeta.ru presented the 5 wounded on the Armenian side as dead.

❌ On July 8, Hraparak.am, referring to France Arménie magazine, wrote that Arsen Torosyan had invited French doctors to Armenia, paid them €200,000 for seemingly humanitarian aid, and did not do so via an agreement with the French government. The claims of the article, however, were false. Both fact-checking journalists and the US-French embassies denied them. “Hraparak” and France Arménie in their turn tried to put the responsibility on the news sources.

❌ On July 9, the day after the publication of the decision of the European Court of Human Rights in the case of the CC, the translation of the article of the Russian website EADaily about the ECHR and George Soros’s links was published on Hraparak.am. EADaily, citing the French newspaper Valeurs actuelles, manipulated the conspiracy theory about George Soros. Though the Hraparak.am article was an almost literal translation of the Russian text, the website mentioned only the French source.

❌ In the conditions of aggravation of the situation on the Armenian-Azerbaijani border, the Ministry of Defense of Azerbaijan released a video of an attack on the Armenian positions. The Armenian side did not confirm the authenticity of the video. Hraparak.am posted this video on the YouTube channel, noting that it was received from Georgian partners.

In early July, the Public Television’s report on the Russian constitutional referendum became the subject of manipulation.

The report showed the comment of Russian opposition figure Alexei Navalny. The fact that Navalny was shown on Public TV was criticized by one of the famous figures of the Russian propaganda, Vladimir Solovyov.

Solovyov’s reaction was widely spread in the Armenian media, and Politik.am even announced that Navalny’s “anti-Putin” interview was included in the report as per the instructions of Nikol Pashinyan.

📌 Navalny was not interviewed. The footage shown was an excerpt from his YouTube video.

Yerevan.Today and Livenews.am covered the topic with manipulative publications. “Anti-Russian” moods in the information field worried the secretary of the PAP faction Arman Abovyan. 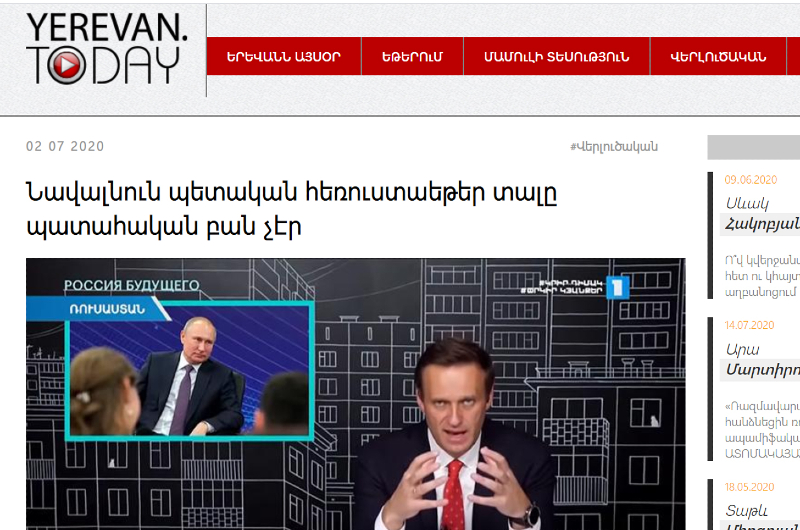 Politik.am wrote that the Armenian Foreign Ministry issued a diplomatic passport to Aza Babayan, a journalist with Radio Liberty, which operates against Russia’s interests.

The publication was manipulative. Aza Babayan really has a diplomatic passport, which she received years ago in accordance with the law, as Babayan’s husband is a diplomat accredited in Russia.

“ArmNews” TV channel touched upon a large family, to which the “My Step” foundation had provided a temporary house. According to the report, “My Step” family was given one day to vacate the house.

The family’s story was also covered by Lurer.com.

“My Step,” however, clarified that the family was repeatedly offered other apartments, which they refused. The family also did not cooperate actively in the issues of finding a job and providing a source of income.

❌ City Hall spokesman Hakob Karapetyan denied the information that Yerevan’s transport will become more expensive in July. The publication of 2013 was spread as fresh news.

❌ The NSS informed that the news titled “NSS threatened Judge Vahagn Melikyan” published on “Pastinfo” website does not correspond to reality.

❌ 1in.am wrote that “VivaCell” is going to sell its shares, but soon the website spread VivaCell’s denial.