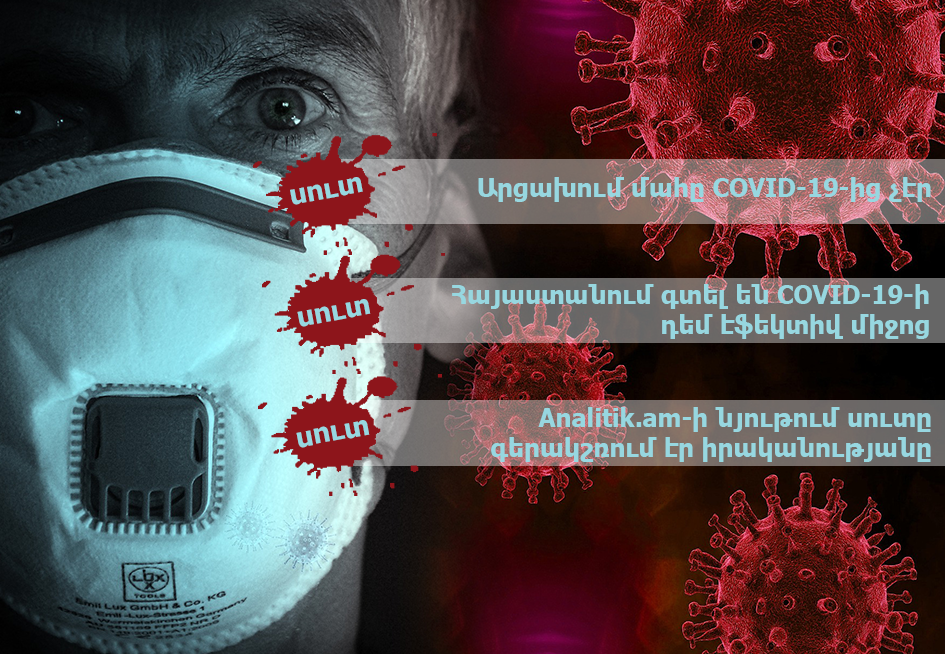 Media.am presents the misinformation and conspiracy theories spread about the epidemic over the past seven days. The unverified and unreliable content was spread not only on social networks but also by news websites.

Hayeli.am: two pieces of misinformation in one title

On June 4, Artsakh President Arayik Harutyunyan announced on Facebook that Satenik Safaryan had died of a serious illness.

This post was spread by many news outlets. Hayeli.am, however, managed to allow two pieces of misinformation in the title alone when passing one text of condolence.

The article was titled “The 33-year-old citizen who died of coronavirus is the daughter of a freedom fighter: Harutyunyan.”

❌ Harutyunyan did not say that the deceased was 33 years old

The website, in fact, connected the case of the death registered in Artsakh with the incident reported by the Minister of Health that evening. Torosyan reported that a 33-year-old man who had chronic diseases had died from the coronavirus.

Hayeli.am had no argument to establish this connection. Moreover, the facts show the opposite. First, Satenik Safaryan was not 33 years old, but 26. The latter had cancer, for the treatment of which a fundraiser was organized at the beginning of 2020.

On June 1, the ambitious news spread on Facebook that an effective remedy for coronavirus had been found in Armenia.

The source of the news was Gohar Hayrapetyan, the host of the 1in.am website. The latter claimed that Professor Joseph Babibkian, who had lived in Indonesia in 2016, created an anti-inflammatory pill from 5 different vegetable oils that prevents various types of viral processes, “and in 2020 it turned out that it also works for the coronavirus.” Not only does it prevent coronavirus, but it also helps keep the disease at bay.

According to Hayrapetyan, the “Health Tone” pill was taken as an aid by the ministry in the fight against coronavirus. And in order to show its effectiveness, she brought the example of their editorial office, where no case of infection was registered. 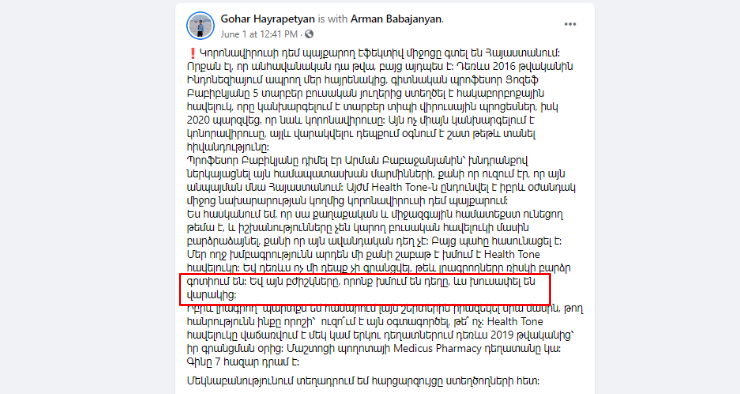 Nork Infectious Diseases Hospital responded to this news, informing that “Health Tone is registered in Armenia as a food supplement, not a medicine, so it cannot be a therapeutic drug in the fight against coronavirus disease. […] Like any food supplement, this can be given to the patient as a supportive measure.”

The hospital representatives also said that “there is no official guideline for the use of this supplement as a treatment.”

“The coronavirus is for establishing a new world order”

From the active pages that spread misinformation about the coronavirus, “The Coronavirus = Century Affair” claimed that the epidemic was staged at the opening ceremony of the 2012 London Olympics.

One episode of the opening ceremony is accompanied by a commentary describing how one day a virus that is not as dangerous as “the panic caused by it.” Doctors are powerless to fight against it, instead, Satan’s accomplices bring “several-story restrictions. And lo appears, “Satan.” He controls with his conductor’s stick.”

According to the commentary, the epidemic is for vaccinating people, after which “a new life is born – a new world order.”

In addition to the conspiracy theory, the facts are also distorted.

According to the official website of the 2012 Olympic Games, this opening ceremony was a tribute to “Britain’s two greatest achievements” – children’s literature and the National Health Service.

This page about conspiracy theories about the coronavirus opened on April 3, 2020. As Facebook shows, it is managed by 5 people, all of whom are from Russia.

The “Fact-Finding Platform” wrote about the penetration of Russian links into the Armenian domain of social networks regarding the conspiracy theory. The English-language content of the opening ceremony was touched upon by Reuters, which considered it false news.

Analitik.am’s material was more of a fabrication than a reality

Analitik.am website’s June 1 publication that “An elderly woman who has all the symptoms of coronavirus was not tested in Ararat” was almost completely false.

According to the material, on the day of the publication, Satik Stepanyan, who had a high temperature for 8 days and has a 3rd-degree disability, applied to their editorial office. The latter allegedly announced that her husband also began to have a temperature, and she had symptoms typical of the coronavirus.

The woman complained about the “terribly inattentive” healthcare system, as they were standing in the wrong line, outside under the sun for 3 hours due to the nurse’s inattention. “Later on, it turned out that the X-ray doctor had gone home.”

This news had spread on news websites and reached the running line of ArmNews TV.

❌ She did not address any journalists and did not comment. After waiting in line for a long time, she felt bad, spoke loudly and upsetly, maybe the journalist was in line

❌ She went to the hospital not after 8 days but 2.

❌ Her husband does not have a temperature.

❌It is true that she complained about standing in line for a long time, but she did not complain about the attitude towards the healthcare system. “I am very grateful, they made an appointment…”

The author of the Analitik.am article, Ofeli Israelyan, confirmed that she did not really talk to the woman, she was just “in the area.” And it turns out that in addition to the above, the words attributed to the woman are a lie and a fabrication.

❌ “I have a headache, loss of taste and all the symptoms that are typical of the new coronavirus.”

Ani Hovhannisyan, the founder of Analitik.am, who spreads such misinformation, said “COVID-19 Armenia” is a member of the fact-finding group, which aims to gather facts about the coronavirus.

And in 2017, Ani Hovhannisyan was sentenced to 1.5 years in prison on charges of extorting money from MP Tigran Urikhanyan.