Coronavirus was the main “fake news topic” in early March. However, the media also disseminated “theories” about LGBT people and the Istanbul Convention (the most targeted fake news topics.)

Coronavirus as a subject of misinformation and manipulation

According to the info posted by several online media, all the patients in France have recovered. That’s not true – France had 5437 COVID-19 cases as of March 16, with 12 cured patients. You can always find accurate information about infected, deceased and cured people on the interactive map.

Hayeli.am wrote that there is a coronavirus-positive child at Surb Astvatsamayr medical center. According to the website, the child had not been isolated, thus jeopardizing others’ lives. Alina Nikoghosyan, the Ministry of Health press secretary, refuted that info.

Also, the media kept publishing life-hacks and natural remedies against the virus. For example, 168.am advised people to use garlic to protect themselves from viruses.

Political stakeholders took advantage of the epidemic to blame the authorities for inaction, declaring that they “brought the virus by remaining idle” and ran away, isolating themselves.

Pashinyan’s security officer was not suspected to have Coronavirus

Some Russian-language online media from Georgia and Azerbaijan wrote that Pashinyan’s security officer had coronavirus symptoms. The Armenian Ministry of Health refuted that info, stating that the security officer was not suspected to have Coronavirus. “He was not feeling well. He underwent some exams, and now he’s OK,” the statement says.

There are no confirmed cases in Artsakh yet

The president of Artsakh also became a Coronavirus misinformation victim. Bako Sahakyan’s fake Facebook account disseminated information, according to which 11 Artsakh citizens and 27 members of the armed forces had Coronavirus symptoms.

A few days later, the same info was published by other fake pages. The Information Checking Center states that the fake info comes from Azerbaijan.

Iravunk newspaper insists that Ryanair refuses to refund for the tickets canceled due to the Coronavirus.

After the Italian government’s decision to restrict air flights, Ryanair cancelled all the flights to Italy from Marcy 13 to April 8. However, the company has declared that customers whose flights are cancelled are entitled to refunds or alternative flights.

Iravunk has been criticizing Ryanair quite frequently. For example, the newspaper has published a few articles where Sargis Simonyan, a former employee of the company expresses his concerns. However, you can come across inaccurate and manipulative theories in these articles.

On March 14, a Facebook user called Arbi Davit wrote the following about Coronavirus, “The virus tried to hurt me, my family and a few of my friends.”

Some media assumed that it was the first Coronavirus patient in Armenia. 1lurer of Public TV, 1in.am, Blognews.am re-published the post. Zhoghovurd daily titled the story as A former Coronavirus Patient shares his Experience. 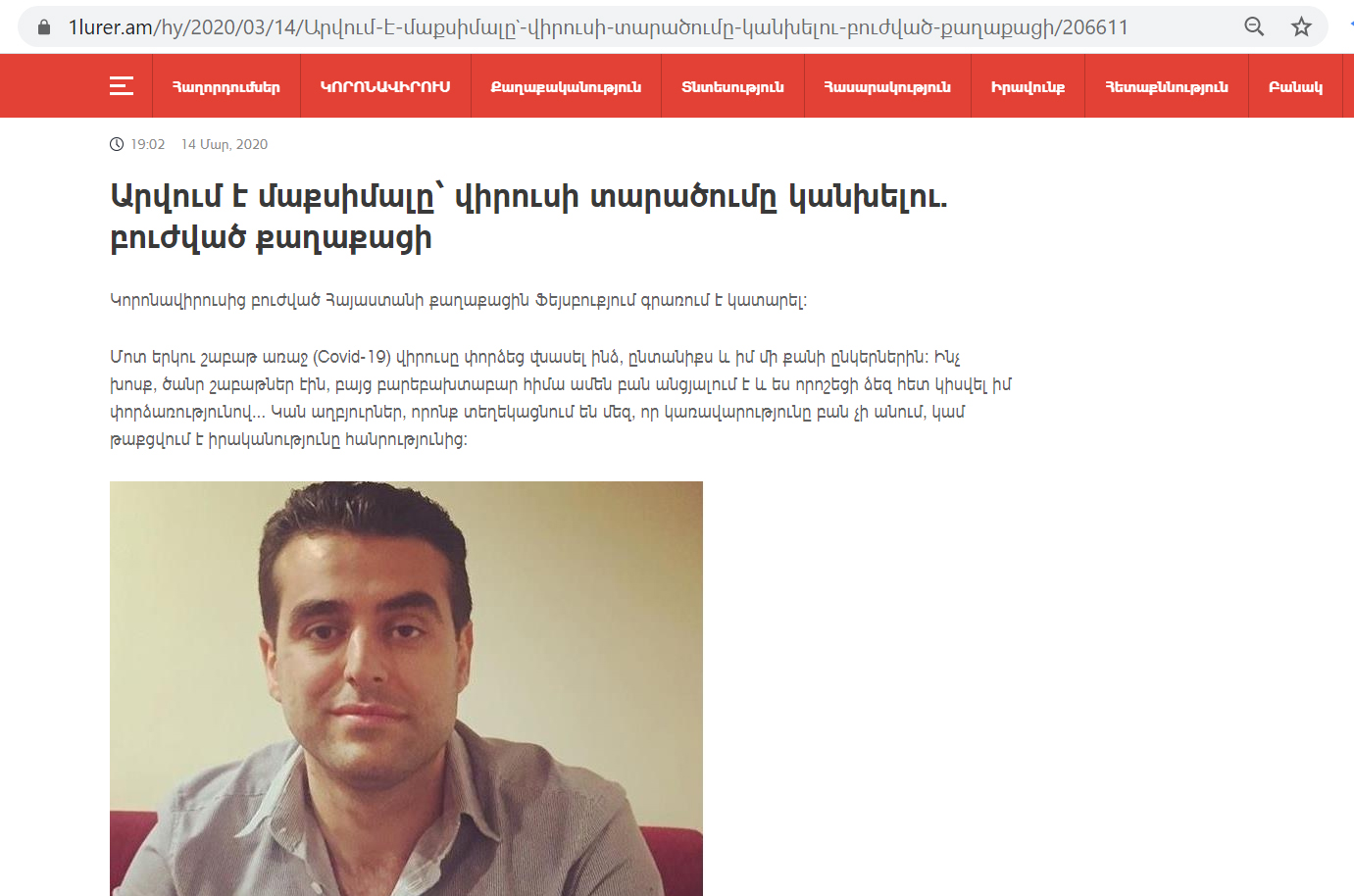 However, it turned out that the user was not a Coronavirus case – the patient was a friend of his. Some online media removed the Facebook post from their websites, whereas others just edited it.

There are no Coronavirus cases in the armed forces yet

On March 15, Ministry of Defense press secretary Shushan Stepanyan refuted the following news disseminated in social networks and the media, “The Ministry of Defense has informed about 10 confirmed Coronavirus cases among members of the armed forces.”

It turned out that it was about the US Ministry of Defense, and not Armenia. However, it was not reflected in the headline.

Masis Mayilyan has not been banned from entering Russia

The newspaper presented no evidence, mentioning that they obtained the info late at night, that’s why they did not make inquiries to official sources.

The non-verified story was re-published by aysor.am, ankakh.com, 24news.am and a number of other online media.

Mayilyan called the news “misinformation.” The Permanent Representation of Artsakh in Russia also refuted the information.

The website presents no evidence, just making a reference to “trustworthy sources.”

The Istanbul Convention quite frequently turns into a fake news topic. Media.am has gathered important facts about the convention here. 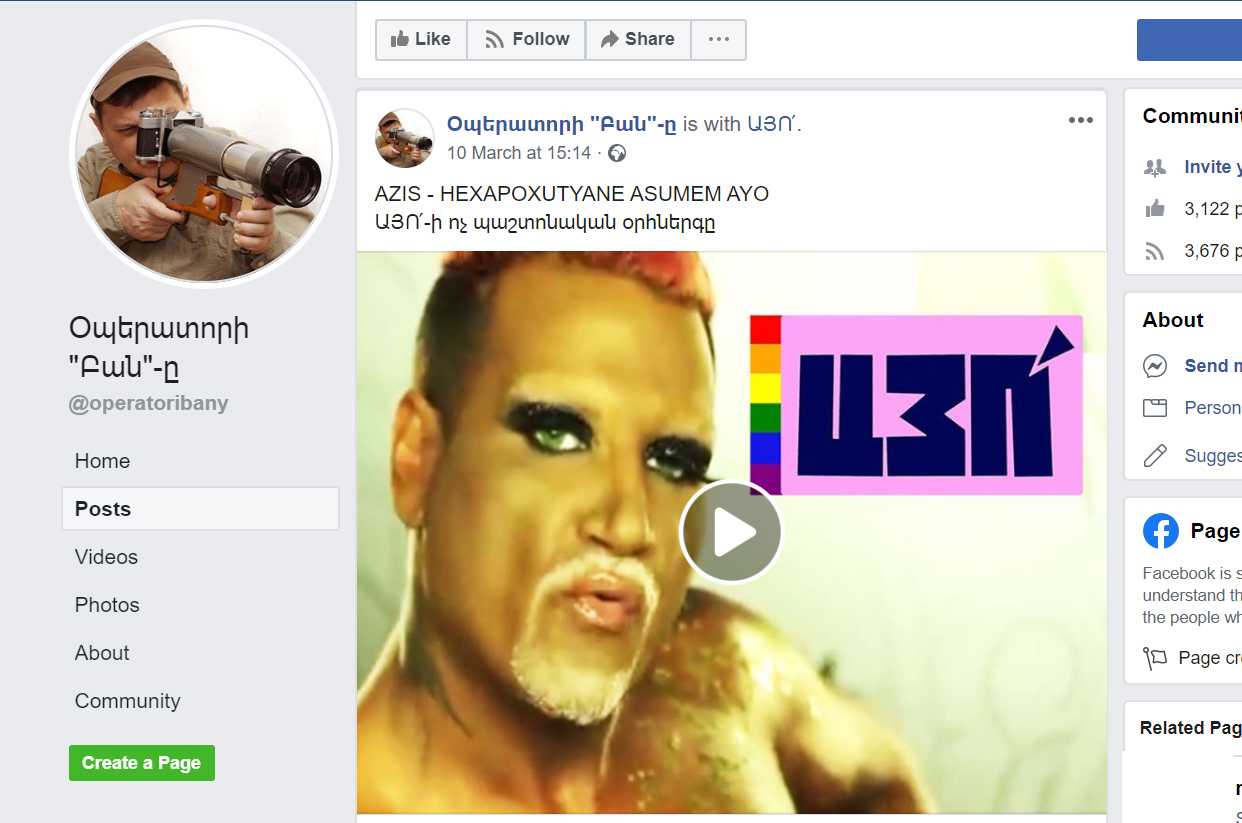 Famous online media kept publishing fake users’ posts. Thus, the media wrote that the daughter of the woman killed in Gyumri had been registered in a care facility. According to the publication, the child returned to “a dysfunctional family” because minister Batoyan “closed down the care facilities, following the instructions of Soros supporters.”