What News Circulated And Was Refuted Between August 15-31 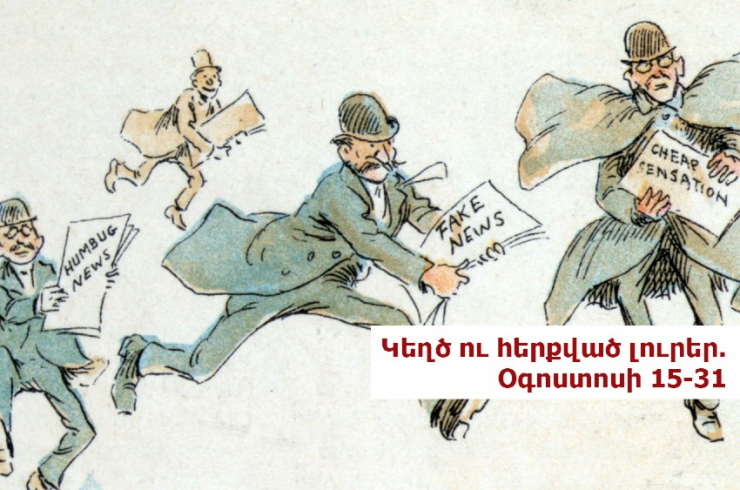 During the last two weeks, the press spread false news about the NSS’ and Pashinyan’s outgoing visit, and a false document signed by the NA deputy was spread as well.

The fake document, signed by the NA deputy, appeared in Russian forums

On August 13, a copy of a letter signed by My Step MP Hrachya Hakobyan (Anna Hakobyan’s brother) appeared on the Russian website, Fishki.net, in which he allegedly applied to George Soros’ Open Society Foundations, asking him to increase the funding 2.5 times. Hakobyan allegedly substantiated the request with the support of Armenian officials who are Russian opposition.

The article was titled “Как армяне учили Навального рэволюцию делать.” The author noted that the material was taken from the Open Armenia Forum. Media.am has not been able to find such text through the link provided by it or by searching the site.

Much of Fishki.net’s content, including this article, is created by users, not journalists. A few days later, Hakobyan’s material was reprinted in other Russian-language forums and websites in the form of user-added content.

The text of the letter was bizarre. For example, Hakobyan allegedly stated that it was the “My step” experience and technology behind the large-scale Moscow protests in recent weeks.

Hrachya Hakobyan refuted the news, the circulating document, stating that it was false.

Hayk Grigoryan, a spokesman and board member of the National Progress Party, who lives in the US, reported that he had been contacted by the US Federal Bureau of Investigation (FBI) and said that the RA Special Investigative Committee had asked them to meet and interrogate Grigoryan.

According to Grigoryan, at the request of the RA National Security Service, Civil Service and the SIS, he met with Bureau representatives and answered questions about the “Constituent Parliament, ‘Sasna Tsrer’ and the Renaissance movement.”

The NSS denied Grigoryan’s information, noting that the US Federal Bureau of Investigation “did not send any letter and did not address such a matter.”

A Fip.am article, published on August 20, states that a re-vaccination of poliomyelitis in Armenia was carried out in violation of the law, as it did not comply with the National Vaccination Calendar.

On the same day, the National Center for Disease Control and Prevention of the Ministry of Health denied the information, noting that the vaccine was administered not only according to the calendar but also according to epidemiological instructions. Fip.am published the denial information.

In this case, the repeated vaccination was due to several factors, including the detection of wild poliovirus in environmental samples in neighboring Iran.

On August 29, Channel 5 released a report according to which the foreign minister and the prime minister’s spokesman shared contradicting information about Pashinyan’s failure to pay a visit to Poland. According to Channel 5, the Foreign Ministry said there was an invitation that Armenia did not confirm, and the Prime Minister’s spokesman said that there was no invitation.

Fip.am describes the news as manipulative; the site has revealed that it is about two different events in Poland; Armenia has been invited to participate in an economic forum that had not been confirmed, and Pashinyan had not been invited to events dedicated to the 80th anniversary of World War II.

Since they were talking about different events, there are no contradictions in the statements made by the officials.

By the way, according to Infocheck.am, earlier reports in the press claiming that Pashinyan was going to attend an economic forum in Poland were incorrect, as Armenia had not confirmed its participation.

The “Pobeda” plane incident was not a rough landing

Pobeda did not agree to describe the incident as “rough landing.” The plane had already hit the runway during the second round.

There were no casualties as a result of the incident.

On August 22, 24news.am quoted Hraparak newspaper as saying that after the resignation of the acting rector of the University of Economics, Ruben Hayrapetyan, Diana Galoyan’s appointment to the post of Vice-rector “was greatly facilitated by Grisha Tamazyan, Deputy Minister of Education and Science, who is Diana Galoyan’s husband.”

The Ministry of Education, Science, Culture and Sports denied the information, stating that Tamrazyan is not married.

The case of financing the observation mission in Artsakh

On August 26, Golos Armenii newspaper referred to the government funding of organizations carrying out observation missions for the Artsakh local government elections. The paper described the move as corruption, noting that the NGOs were funded to present a result that is favorable for Pashinyan.

The article contained a number of inaccuracies. For example, the author misrepresented the reason for not adopting the new Electoral Code. Moreover, the paper said that the Artsakh CEC had not registered the observers, which was manipulative because the deadline had not yet expired.