Pictorial: The Recoverable Amount From The ECHR Judgement 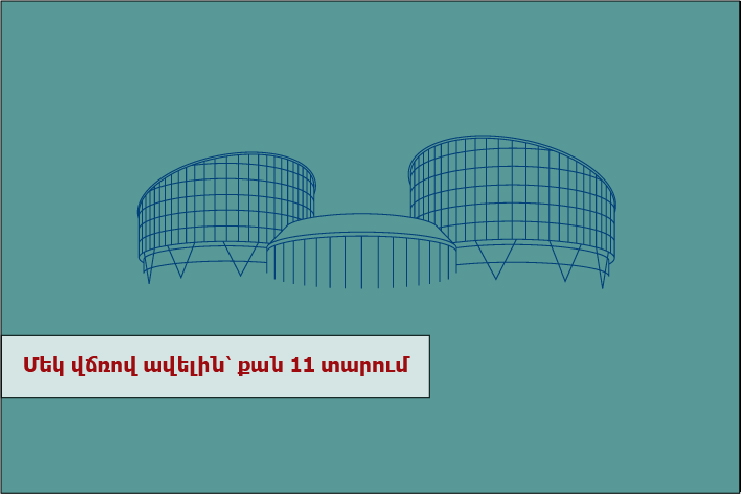 The European Court of Human Rights’ July 25 ruling against Armenia was unprecedented in terms of the amount of compensation. In this one case, Armenia will pay the plaintiff more money than they had paid in previous years.

From the ECHR’s first judgment in 2007 until 2018 (a span of 11 years), Armenia has paid 1 million 225 thousand EUR as compensation for lost cases. Now, in three months, according to this decision, Armenia should pay citizen Yuri Vardanyan 1 million 608 thousand EUR.

The “Vardanyan vs. Armenia” case relates to the forced eviction of the applicant from their property, which took place in the year 2000 when the Government of the Republic of Armenia approved the North Avenue development plan.

On October 27, 2016, in the same case, the ECHR recognized Vardanyan’s fair trial as well as property rights violations, and the issue of just satisfaction was left to be settled.

The applicant had already received 54 million 494 thousand AMD in domestic proceedings. In light of the Government’s objection, the European Court reduced the amount of 5 million 232 thousand EUR claimed by the applicant and awarded 1 million 608 thousand EUR, of which 6 thousand EUR is in respect of non-pecuniary damage.

Hetq.am reports that this case was also peculiar in that the ECHR, in its judgment from three years ago, registered a violation of Article 6 (1) of the Convention on the Protection of Human Rights and Fundamental Freedoms authorized by then-Interim President of the Court of Cassation Arman Mkrtumyan. Mkrtumyan, as a judge, did not take an objective stance, violating the right to a fair trial.

36 lawyers sent a letter to the Ethics and Disciplinary Committee of the General Assembly of Judges requesting to know whether the commission had initiated disciplinary proceedings against Arman Mkrtumyan. However, no proceedings were instituted against Mkrtumyan.

How large is the sum?

The mere fact that the amount of compensation for a single case exceeds the sum of the 11-year verdicts suggests that the sum is large. However, let us try to understand its greatness in some respects in relation to the media field. In this case, the media only needs to be understood in a narrow, media sense.